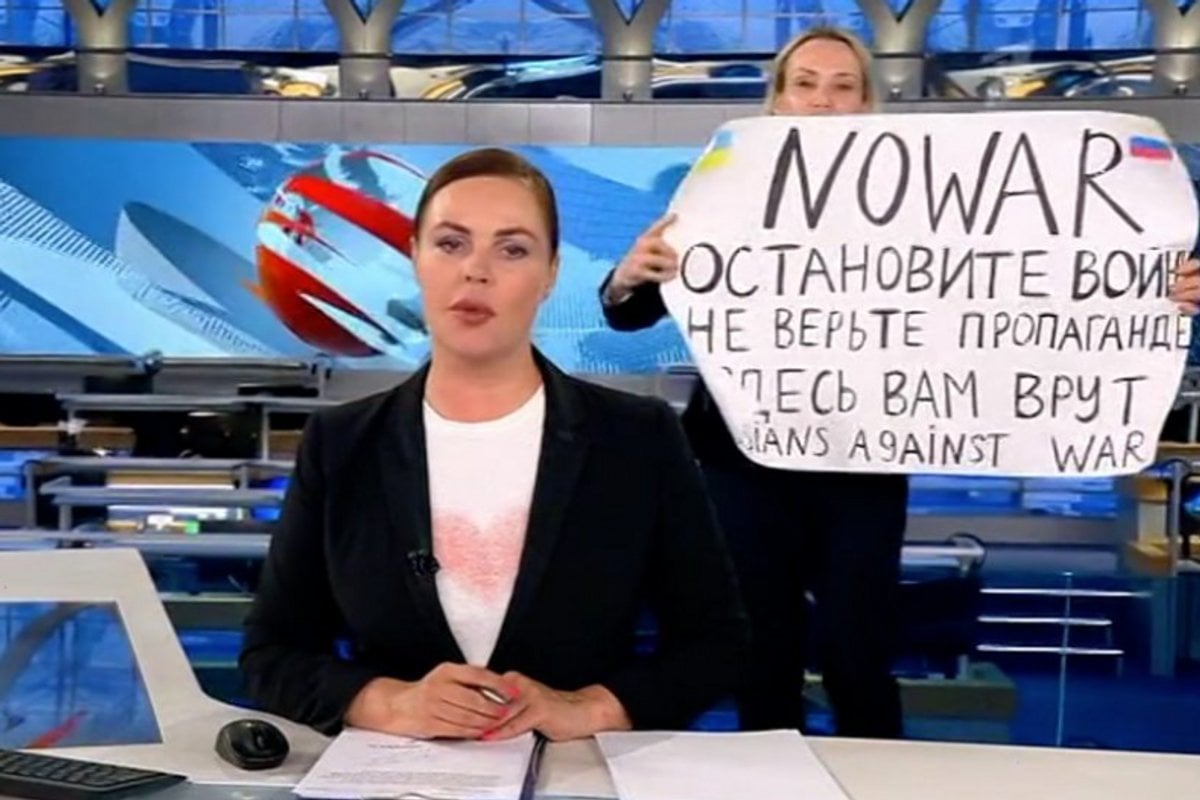 On Monday night, Russian journalist Marina Ovsyannikova walked in front of a camera at the Channel One studios holding a sign.

During a live new segment on state TV, which beams into homes across Russia's 11 time zones, Marina walked behind a studio presenter as she was reading the news to tell Russians not to be blinded by propaganda while holding up an anti-war sign.

"NO WAR. Stop the war. Don't believe propaganda. They are lying to you here," the sign read.

Something extraordinary happened today in the alternative and glitch reality of official #Russia prop. A Channel 1 employee Maria #Ovsyannikova appeared behind the anchor Andreeva during the live programme Vremya with a poster:#Stopthewar, don't believe propaganda, they're lying. pic.twitter.com/J8GCYvMw3D

The demonstration saw Marina - who has been hailed for her bravery on social media - face Moscow's Ostankino district court, where she was found guilty of flouting protest laws and fined 30,000 roubles ($A388).

It was not immediately clear if she could also face other, more serious charges.

"As far as this woman is concerned, this is hooliganism," Kremlin spokesman Dmitry Peskov said.

"[We] will get to the bottom of this," he told reporters, describing Channel One as a pillar of objective and timely news.

After the hearing, Marina told reporters she was exhausted, had been questioned for more than 14 hours, had not been allowed to speak to her relatives and was not provided with legal assistance.

She said she needed to rest before commenting further.

Marina's protest stirred fears that she could be prosecuted under new legislation that carries a jail term of up to 15 years.

The law, adopted eight days after the invasion of Ukraine, makes public actions aimed at discrediting Russia's army illegal and bans the spread of fake news or the "public dissemination of deliberately false information" about the use of Russia's armed forces.

Officials in Moscow describe Russia's offensive in Ukraine as a special military operation to disarm the country and prevent "genocide" against Russian-speakers, a justification dismissed by Ukraine and its allies as a false pretext for an invasion of a democratic country.

The BBC describes the new law as an attempt to "criminalise journalism."

In a video recorded before her protest, Ovsyannikova blamed Putin by name and said, "The next 10 generations of our descendants will not wash away the shame of this fratricidal war."

"We would urge the authorities to ensure that she does not face any reprisals for exercising her right to freedom of expression," she told a news briefing in Geneva.

Almost 15,000 people have been detained across Russia during anti-war protests since February 24, according to a tally kept by OVD-Info, an independent protest-monitoring group.

Shamdasani said it was not clear how many remained in detention.

"We do not have access to those who are detained, unfortunately," she said.

Following the protest, French President Emmanuel Macron said he will offer Marina protection, which he will discuss with President Putin in upcoming talks.

"We will launch diplomatic efforts aiming to offer (her) protection -- either at the embassy but also protection through asylum," Macron said, according to France 24.

French President Emmanuel Macron says France will offer support to a Russian journalist who denounced the war in Ukraine in a protest on Russia's state TV.

"I will have the chance at my next talks with President Putin to propose this solution in a very direct and concrete manner," he added.

"I want to have as quickly as possible all clarity about her personal situation and her ability to continue with her work."