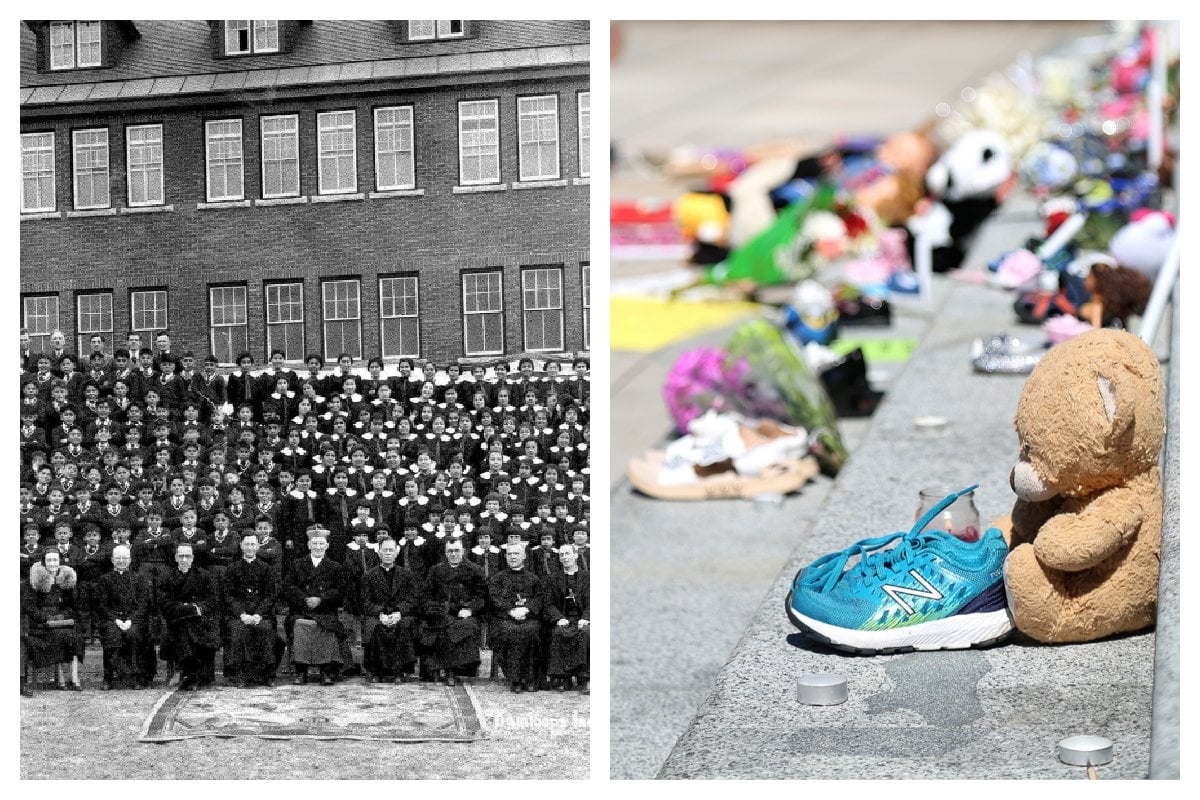 A red brick building stands in the city of Kamloops.

It was once the largest residential school in Canada, with a granite chimney and stone detailing beneath dozens of perfectly symmetrical windows.

The mountains of British Columbia rise and fall behind it, the entranceway of number 345 reading 'The Kamloops Indian Residential School'.

For decades, former students spoke of a sense of knowing. Knowing their classmates went to school one day and never came back.

And then, last Thursday a ground penetrating radar specialist ran an antenna across the parameters of the school. This was the culmination of decades of advocacy from the First Nations community who demanded to know what lay beneath the school grounds.

What they discovered was the bodies of 215 children, some as young as three years old.

They had been buried without a tombstone, their lives erased from history.

But these are not the only mass graves hidden beneath schools in Canada. There are dozens more.

Estimates vary, but experts believe there are between 3200 and 6000 children who died amid abuse and neglect in residential schools during the 19th and 20th centuries.

The Canadian government set up and funded a network of boarding schools for Indigenous peoples which they called Indian residential schools in the late 19th century.

Run by Christian churches, the system was an attempt to eradicate Indigenous culture and assimilate children into the European-Canadian culture. The government described the policy as an effort to "kill the Indian in the child".

In the 1920s, under law, children were forcibly removed from their homes and sent to Indian residential schools from September to June. The only times they were permitted to visit their families, if at all, were Christmas and Easter.

Over the 20th century, around 150,000 children were placed in residential schools. They were not permitted to speak in their native language or practise their own spirituality. Some ran away. Others disappeared.

Listen to the latest episode of Mamamia's daily news podcast, The Quicky. Post continues after podcast.

The mistreatment of students at residential schools is extensively documented.

Corporal punishment was widespread. A lack of funding meant children were malnourished, and the schools were overcrowded with inadequate heating and a lack of any real medical care. Poor sanitation meant that influenza and tuberculosis spread rapidly, and at one school the death rate reached 69 per cent.

Students were also experimented on without their knowledge. Some were intentionally malnourished as part of nutrition experiments. Others were part of trials for vaccines, vitamin D supplements and other drugs.

Many former students have relayed their experiences of severe physical, sexual and psychological abuse, at the hands of both staff and older students.

Sue Caribou is one woman who was snatched from her home in 1972 and forced into an Indian residential school. She was seven years old.

She recalls being thrown into a cold shower every night, "sometimes after being raped". She was forced to eat rotten vegetables and called a "dog" during her years there, and now in her 50s, still suffers from related health conditions.

There are accounts of parents who camped out in front of schools, desperate to see their children inside. Many priests and nuns believed any interaction between children and their parents would undo the work of assimilation.

Fred Gordon was another child who was taken from his parents while playing with two kids in the front yard of his home.

His aunt, Evelyn, was killed by nuns at a residential school in 1936. She was 11 years old.

At the same school, Gordon was routinely sexually abused by a nun. He was left deaf in one year and blind in his left eye because of the abuse perpetrated against him.

He is one of many who says he "wasn't surprised" by the discovery of 215 dead bodies in Kamloops.

Harvey McLeod attended The Kamloops Indian Residential School in 1966, and told CNN, "I was a person that didn't want to live anymore, it changed me".

Suffering physical and sexual abuse, McLeod compares the trauma he experienced to a prisoner of war.

Looking back, he remembers discussions that "... this may have happened, that [his classmates] may have passed".

At the same time, he held on to the hope that they had run away. He felt happy for them. Maybe, he reasoned, they managed to escape.

The kids who didn't make it

For McLeod and so many living survivors, the discovery last week confirmed their greatest fear.

There is now mounting pressure to conduct similar searches at the dozens of other residential schools across Canada.

Canadian Prime Minister Justin Trudeau tweeted on Friday: "The news that remains were found at the former Kamloops residential school breaks my heart - it is a painful reminder of that dark and shameful chapter of our country's history. I am thinking about everyone affected by this distressing news. We are here for you."

For more than 100 years, First Nations people in Canada spoke of "children who went to school and never returned".

Last week, the discovery of those 215 bodies means no one can deny where they went.

Hopefully, this is the beginning of a commitment to locate the thousands of other bodies thrown into mass graves around Canada.

Finding them, and marking their burial sites, is a way of at least acknowledging these children existed.

If this post brought up any issues for you, you can contact the PartnerSPEAK website and peer support forum here. Contact the PartnerSPEAK Peerline: 1300 590 589 (Please check website for hours). All peer support is offered by fully trained individuals with the lived experience of having an intimate partner or close family member involved in child sexual abuse material.

L
lq a year ago