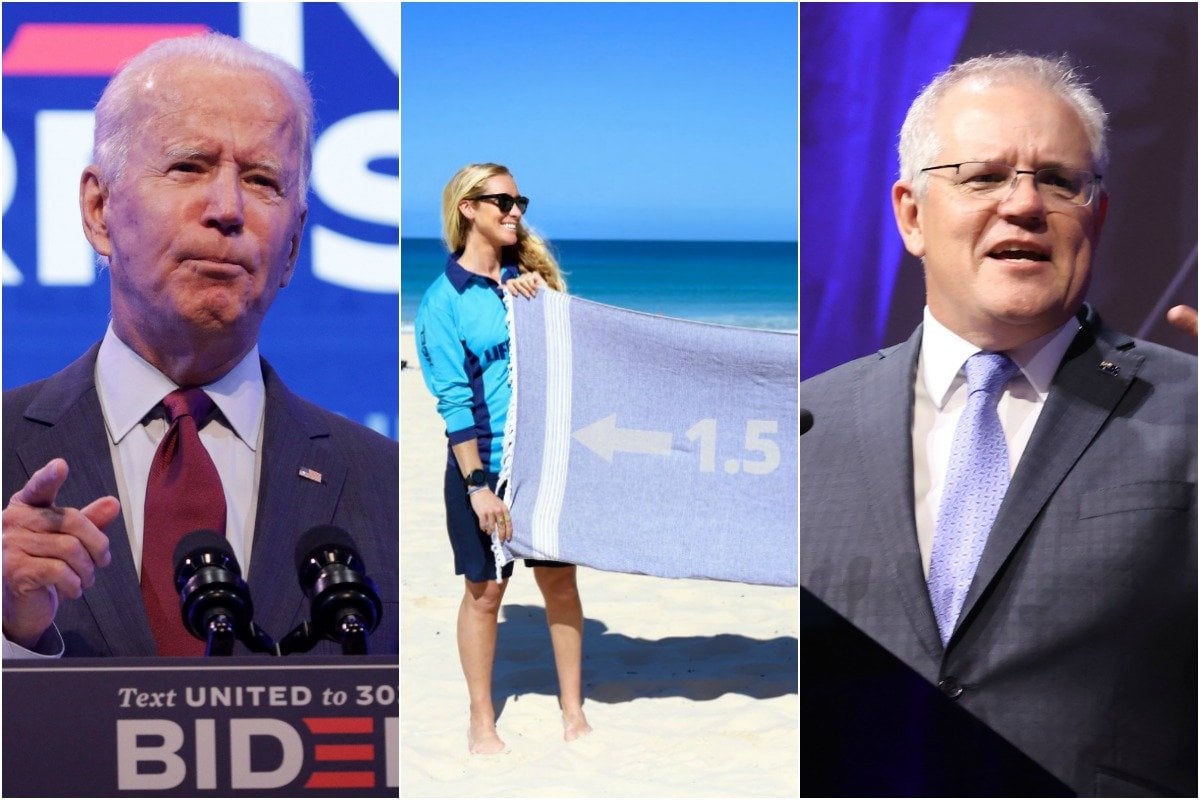 People flying into Australia from designated 'safe countries' could soon be allowed to quarantine at home.

The Australian Health Protection Principal Committee (AHPPC) is looking at the safety of home isolation.

Prime Minister Scott Morrison said the timing of reviving home quarantine would be determined principally by the panel's health advice.

"But I'm hopeful it's something we can move to," he told reporters in Canberra on Tuesday.

Prime Minister Scott Morrison is open to allowing people arriving in Australia to quarantine at home if health experts give the green light. https://t.co/ZOBMBsWHOL

"As time goes on, we will need a more flexible approach that gives us more options for managing this, so I think that is something that is under active consideration," he said.

Two weeks hotel quarantine is mandatory for overseas arrivals and some domestic travellers entering states and territories with closed borders.

An ankle bracelet or a police check-in app are some of the ways being looked at to ensure success of the program, reports the Sydney Morning Herald.

The AHPPC is preparing advice for national cabinet, which next meets on October 16, on quarantine options for the long term.

Figures from the Department of Health show 30,000 people have died in the past three years while on the waitlist for their approved home care package.

The numbers were discussed in a Senate inquiry hearing on Tuesday, with home care first assistant secretary Nick Hartland unable to say how many of those deaths were as a result of COVID-19. He did confirm that 10,569 people have died while on the waitlist in 2019-2020.

At least 102,081 older Australians approved for a home care package remain on the national waitlist. Almost 16,000 of those are waiting for high level support.

It will hand down its overall report into the sector in February and is only releasing coronavirus-specific recommendations as a matter of urgency.

Hours before his first debate with US President Donald Trump, Democratic presidential nominee Joe Biden has released his 2019 tax returns and his campaign called on Trump, who has come under fire for not releasing his returns, to do the same.

Biden, due to share the stage with Trump on Tuesday evening local time (11am Wednesday AEST) in Cleveland, took the step two days after the New York Times reported that Trump paid just $US750 ($A1053) in federal income taxes in 2016 and 2017 - and none in 10 of the previous 15 years - after reporting years of heavy losses from business enterprises.

The American people deserve transparency from their leaders, it's why as of today, I've released 22 years of my tax returns. https://t.co/6fwL20fWeI

Biden's taxes showed that he and his wife Jill paid more than $US346,000 in federal taxes and other payments for 2019 on an income of nearly $US985,000 before seeking a refund of nearly $US47,000 they said they had overpaid the government.

The global coronavirus death toll has surpassed one million, according to a Reuters tally, a bleak statistic in a pandemic that has devastated the global economy, overloaded health systems and turned daily life upside down.

The number of COVID-19 deaths this year is now double the number of people who die annually from malaria - and the death rate has increased in recent weeks as infections surge in several countries.

It took just three months for COVID-19 deaths to double from half a million, an accelerating rate of fatalities since the first death was recorded in China in early January.

More than 1 million people have died of COVID-19 around the world, according to a Reuters tally, with the pace of fatalities picking up as infections again surge in several countries https://t.co/ZyGx3uwc5M

More than 5400 people are dying around the world every 24 hours, according to Reuters calculations based on September averages, overwhelming funeral businesses and cemeteries.

That equates to about 226 people an hour, or one person every 16 seconds.

The United States, Brazil and India - which together account for nearly 45 per cent of all COVID-19 deaths globally - have all lifted distancing measures in recent weeks.

"The American people should anticipate that cases will rise in the days ahead," US Vice President Mike Pence warned on Monday.

The city moved to "step two" of its roadmap on Monday and the premier clarified some of its details on Tuesday.

Under the latest restrictions, L-platers can continue to accrue the 120 hours of supervised driving needed to gain a provisional licence.

But learners must be driving for one of the four permitted reasons to leave home and not solely for practice.

As we move toward COVID Normal, get help navigating through the next step here: https://t.co/NlIzK5rHAQ

Victorians are also allowed to travel across metro borders for child care but will be subject to "step two" rules like local residents.

Other clarifications made were that Melbourne dog groomers must only operate from retail stores, painters are allowed to carry out emergency repairs at occupied properties, and public cricket nets can also be used if facilities aren't required.

Victoria recorded 10 new cases and seven more deaths on Tuesday, bringing the state's death toll to 794 and the national figure to 882.

Melbourne's 14-day average now sits at 18.2 cases. It needs to drop below five and there must be fewer than five mystery cases for a fortnight before the state eases restrictions further.

A new COVID-19 test that can offer results in just 60 seconds is being developed in Queensland and if successful, help drive down potential outbreaks at high-risk areas like aged care facilities, shopping centres and airports.

The same test is also being researched in the US, and requires a nasal swab that's then tested with a few drops of a special solution that's currently being formulated.

The Queensland government has provided $1.5 million in funding in the hope the technology could eventually be made into a spray that would be used on PPE.

It will cost as little as a cup of coffee once up and running and will revolutionize the way we fight the virus.

No local virus cases in NSW for fourth day, as Bondi releases its 'summer plan.'

NSW has chalked up a fourth consecutive day of zero locally acquired cases of COVID-19, as the Queensland government prepares to reassess its hard border closure with the state.

Two new cases of COVID-19 were recorded in returned travellers in the 24 hours until 8pm on Monday, making it the fourth day in a row NSW has remained free of community transmission.

In the past seven days, the state has recorded only one locally acquired case.

The Queensland government is set to review its decision to bar most NSW residents from entering the state on Wednesday, as it does at the end of each month.

Waverley Council in Sydney, which looks after one of Australia's most popular beaches - Bondi - has released its plan for summer.

Today we released our COVID Summer Plan. The purpose of the plan is to help Council manage Waverley's beaches and open spaces in a COVID-safe way that's in line with the NSW Government's Public Health Orders. Find out more here: https://t.co/rFvnjmLGy8 pic.twitter.com/bVyNJokxet

Popular beaches and exercise routes in Sydney's east will be barricaded off when they reach capacity on hot summer days, to try and keep large crowds under control.

"Beach ambassadors" will stand at entry points to advise visitors that the beach has reached capacity.

Bushfire and coronavirus-ravaged parts of regional Australia will share in $100 million of Commonwealth cash over the next two years.

Deputy Prime Minister Michael McCormack will on Wednesday announce a new regional recovery fund, part of $135 million in spending to be outlined in next week's budget.

The program will be targeted at regions suffering after drought, bushfires and the pandemic, as well as areas primed for economic diversification.

In NSW, the Snowy Mountains, Hunter-Newcastle and Parkes regions will be eligible.

Victoria's Gippsland region is included, along with Cairns, Gladstone, Mackay-Isaac-Whitsunday and the tropical north in Queensland.

La Niña on the way to Australia.

Australia is set for a rainy spring and summer with the possibility of flooding and more severe tropical cyclones than usual.

The Bureau of Meteorology on Tuesday confirmed a La Niña is occurring over the Pacific Ocean.

BREAKING: La Niña has officially been declared by the BoM today.

The last such event occurred from 2010 to 2012 and resulted in one of Australia's wettest two-year periods on record.

It also resulted in more severe tropical cyclones than average.

The bureau says it's not expected to be so severe this time around but is likely to be of moderate strength.

- The UK has reported a daily record of more than 7000 new coronavirus infections as pressure grows on the government, with some demanding loosening and others tightening of physical-distancing rules.