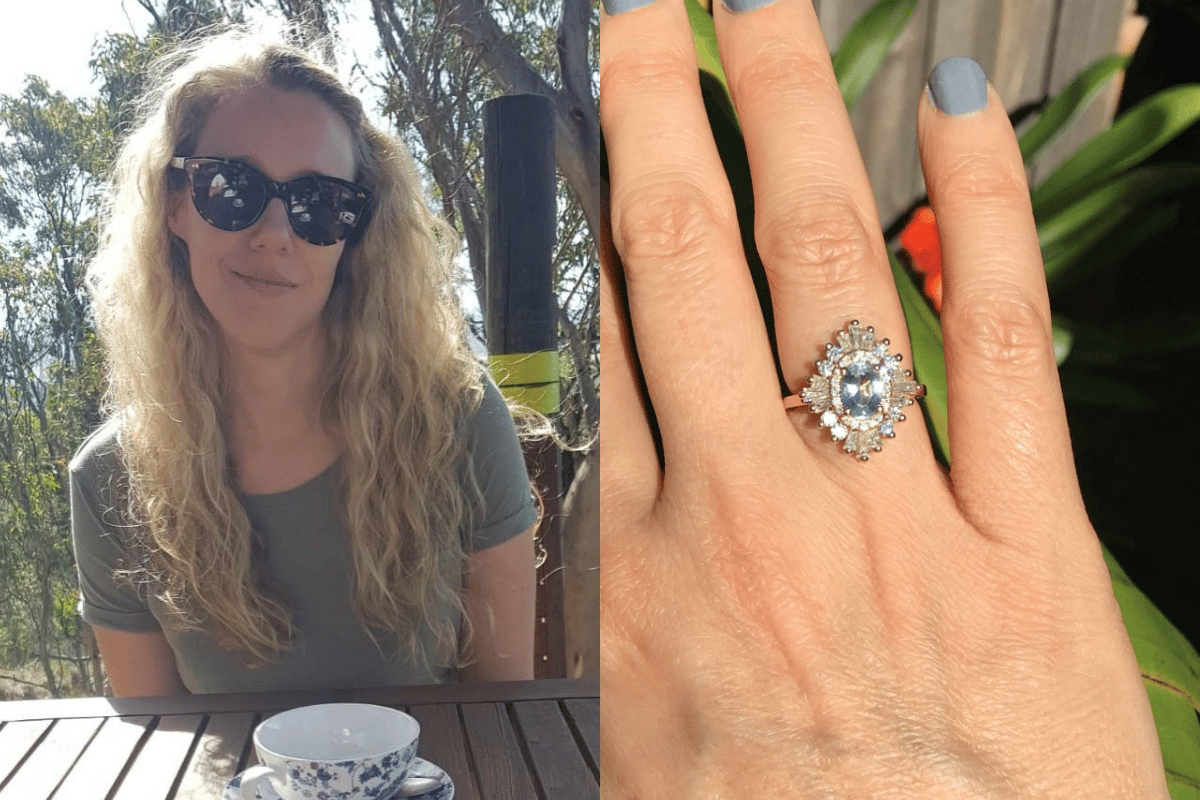 For three years now I’ve been wearing a ring on the fourth finger of my right hand.

It’s rose gold with diamonds encircling a large oval aquamarine. At the time, I chose the water-like stone simply because it’s my birthstone and I loved the pale blue colour.

Often when people see it, they comment that I’m a “lucky girl”, assuming as most would that someone gave it to me as a token of love with the fairytale promise of forever. Others come straight out and ask if I’m engaged, and I smile and jokingly say, “just to myself”.

I bought the ring when I was recovering from the worst breakup of my life. It had been a toxic, on/off relationship and when it ended, I couldn’t forgive myself for what I considered to be an appalling lack of judgement and self-care.

I’d always considered myself to be a woman of boundaries and self-respect and, up until I met him, I was.

On our first date, he took me kayaking and enthusiastically and without care for my too polite and obviously unconvincing protests, pulled me into the water.

My head went underwater and only later did I realise I'd lost one of my earrings: a small gold round stud with a heart pressed out of the centre.

I remember being irked by it, but as I was to do many times in the future, I let his feelings and needs trump mine.

Months later he told me he thought it was “poetic” that I’d lost my heart in the ocean the day I met him. At that time, I thought it an incredibly romantic comment, an emotional response I cringe at today, but now I realise with acute and breathtaking hindsight how accurately the events of that day foreshadowed what was to come.

The first few months were magical, full of sweeping, grand gestures of helicopter rides and handcrafted, bespoke gifts; home-cooked meals when my parents (and even my aunt) were in town; being picked up from work on his motorcycle for lunchtime picnics, and seemingly endless expressions of adoration.

He opened up quickly, divulging intimate details of his divorce and custody battle and I felt such empathy for him and amazement at his bravery and vulnerability in loving again.

I was so overwhelmed by his intensity, charm and attentiveness, and how special he made me feel. He put me on a pedestal and I mistook that fleeting adoration for genuine love.

When things started to change after a couple of months, I kept thinking this new behaviour was an anomaly, not that his behaviour in the beginning actually was.

He started to flake on plans simply by disappearing, becoming unresponsive until the following day when he reappeared with a barrage of apologetic texts.

He started drinking more frequently, becoming belligerent and calling me a fascist because I didn’t find it fun when he got his “woo-hoo” on (aka, getting drunk to the point of being kicked out of the bar).

He became paranoid, accusing me of duplicitous behaviour when he forgot things that happened when he was drinking.

While the drinking was a clear problem, it was so hard to pinpoint the emotional parts that were changing, like when you try to get a broken piece of shell out of raw egg white and the white shifts to the side every time your finger almost captures it.

He’d vehemently deny things he said to the point where I began to doubt myself, reasoning that all the stress and emotional exhaustion must be affecting my memory.

When he didn’t get his way, he’d resort to emotional manipulation and if that didn’t work, sulk. He’d always come back with apologies and promises to change and I naively believed his words over his actions, again and again.

What was clear was that my boundaries were constantly being pushed. He showed complete disregard for them, appearing to relish how much he could push them.

While his actions were selfish and disrespectful, my own behaviour of allowing it to happen was in my mind far worse. The more I asserted and then ignored my own boundaries, repeatedly going against what I knew I wanted, deserved and valued, the more my self-worth vanished.

My increasing inability to firmly assert my boundaries and stand my ground, regardless of whether it resulted in losing him, was putting me in a very emotionally dangerous place.

My boundaries became so weak that I even started reasoning away the need for them to matter. After two years of breaking up and getting back together, of enduring behaviour I never thought I would and of no longer being able to trust my own words, I was at my breaking point.

In a last-ditch effort to keep me, he promised to address his drinking, go to therapy and even agreed to marriage and children, all things he knew were relationship deal breakers for me.

So he took me engagement ring shopping, without proposing, insisting that he wanted to wait until he had a ring to propose. I knew in my heart that it was a delay tactic, but I tried one last time to trust his words.

After two months I finally left him, giving up my misguided dream that who he could be on his very best days was at all who he really was.

It was the hardest thing I’d had to do at that point in my life, not because I loved him so much, but because I had to rediscover the love I had for myself in order to leave him. I had not taken care of myself for so long that I had to dig extraordinarily deep to prioritise myself over him.

He was furious, but I stuck to my guns. The relationship had been all about him and his needs, and me leaving was finally about mine.

It took me a very long time to recover from that relationship, not because I loved or missed him so much. I quickly realised I had been loving him more out of habit than choice for a while before we split, so I knew the remaining love I had for him would soon fade.

It took me ages because I couldn’t forgive myself for being in a relationship that so badly etched away at my confidence and self-esteem. That’s not what love is supposed to do.

In truth, I did lose my heart in the ocean that day, in the sense that meeting him resulted in me temporarily and crazily giving my heart to him.

I bought the ring soon after it ended to remind myself of the reasons I left, of the decision I made to choose myself. Only after I bought it did I discover that aquamarine is a stone of courage, supposed to inspire trust and letting go, encourage self-respect and be a symbol of hope.

When I look down at it now, the hundreds of times a day that my hands cross my eyeline, I smile proudly, thrilled that I did not marry him.

So I guess it is a token of love, but one of self-love. Loving myself will always come ahead of anyone else because without that there is nothing else - at least nothing healthy.

Sassica is a freelance writer based in Sydney. She specialises in personal essays on relationships, travel, health, food, women’s interest and wellbeing. You can find her on Instagram or read more here.