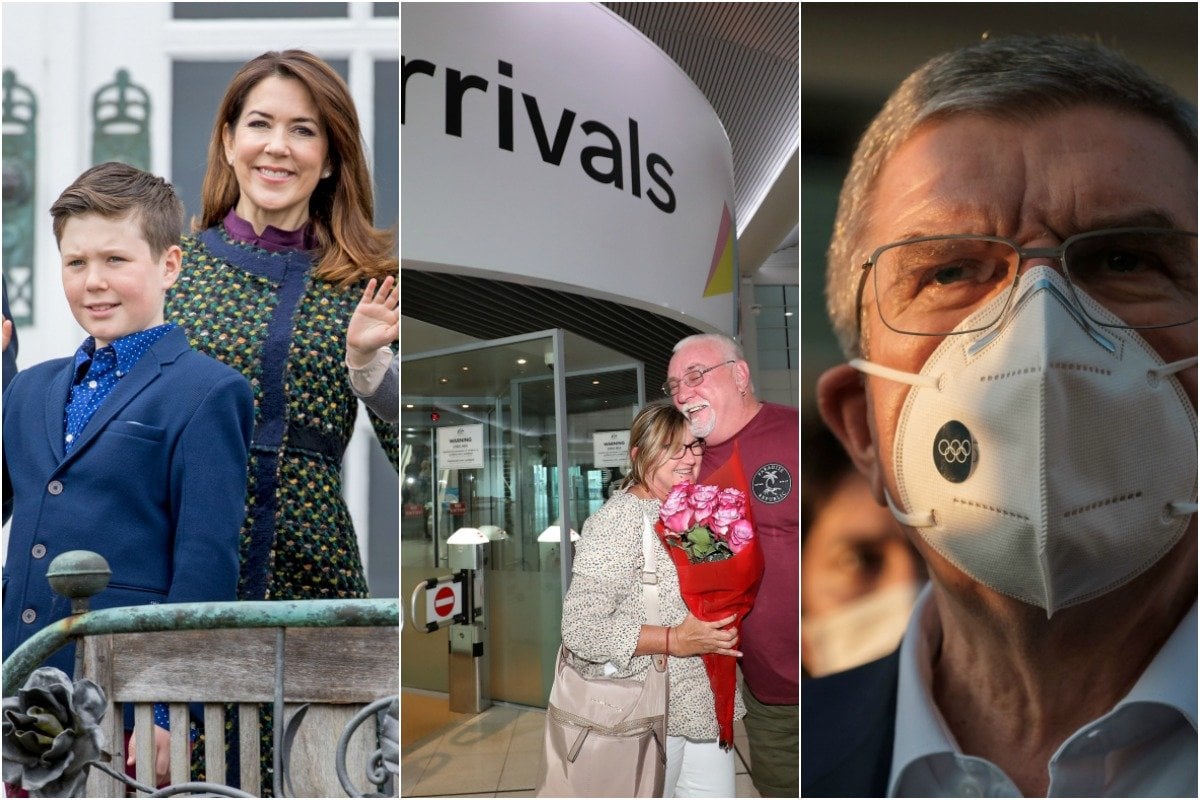 Prince Christian, 15, is the second heir to the Danish throne and caught the coronavirus at school.

"Apart from the Crown Prince's family, Prince Christian has not been in contact with other members of the royal family in recent times," the Palace said in a statement.

Snow has fallen in Victoria and New South Wales, 18 days before Christmas.

Heavy snow has fallen in the Alpine regions of New South Wales and Victoria during the first week of summer.

Temperatures at Perisher dropped to just 1C on Monday, with -1C expected today.

The Bureau of Meteorology has forecast more snow over the coming days thanks to a cold air mass moving across the southeast of the country.

The BOM says, "We usually have a snow event like this around once per summer. But the maximum temperatures are up to 12C below December's average."

People in a Fraser Island hamlet have been told to leave immediately as a dangerous bushfire bears down on their Queensland community.

The Queensland Fire and Emergency Services on Monday night warned people in The Oakes to evacuate via Eastern Beach as soon as possible.

People at the Kingfisher Bay resort and village on the island have also been told to prepare to leave in a watch and act warning as a nearby fire threatens to get worse.

A large bushfire that could pose a threat to those in its path is threatening the hamlet of The Oakes on Queensland's Fraser Island. https://t.co/XLVozdawsK

The large blaze, which has already burnt half the world heritage-listed island, was on Monday burning south towards The Oakes. Earlier emergency alerts were issued on Monday for Yidney Rocks and Happy Valley.

Those still in The Oakes should follow their bushfire survival plan, QFES said.

"Leaving immediately is the safest option, as it will soon be too dangerous to drive," QFES said in a statement on Monday night.

About 90 firefighters and 24 water-bombing aircraft are trying to beat back the fire, which is burning in three areas across Fraser Island

The fire on Fraser Island, also known as K'gari, has been burning since mid-October.

Western Australia is welcoming back travellers from NSW and Victoria without the need to quarantine for the first time in almost nine months.

Under changes that came into effect overnight, the states have been reclassified as "very low risk", removing the requirement to self-isolate for 14 days.

It leaves South Australia as the only state still subject to travel restrictions. 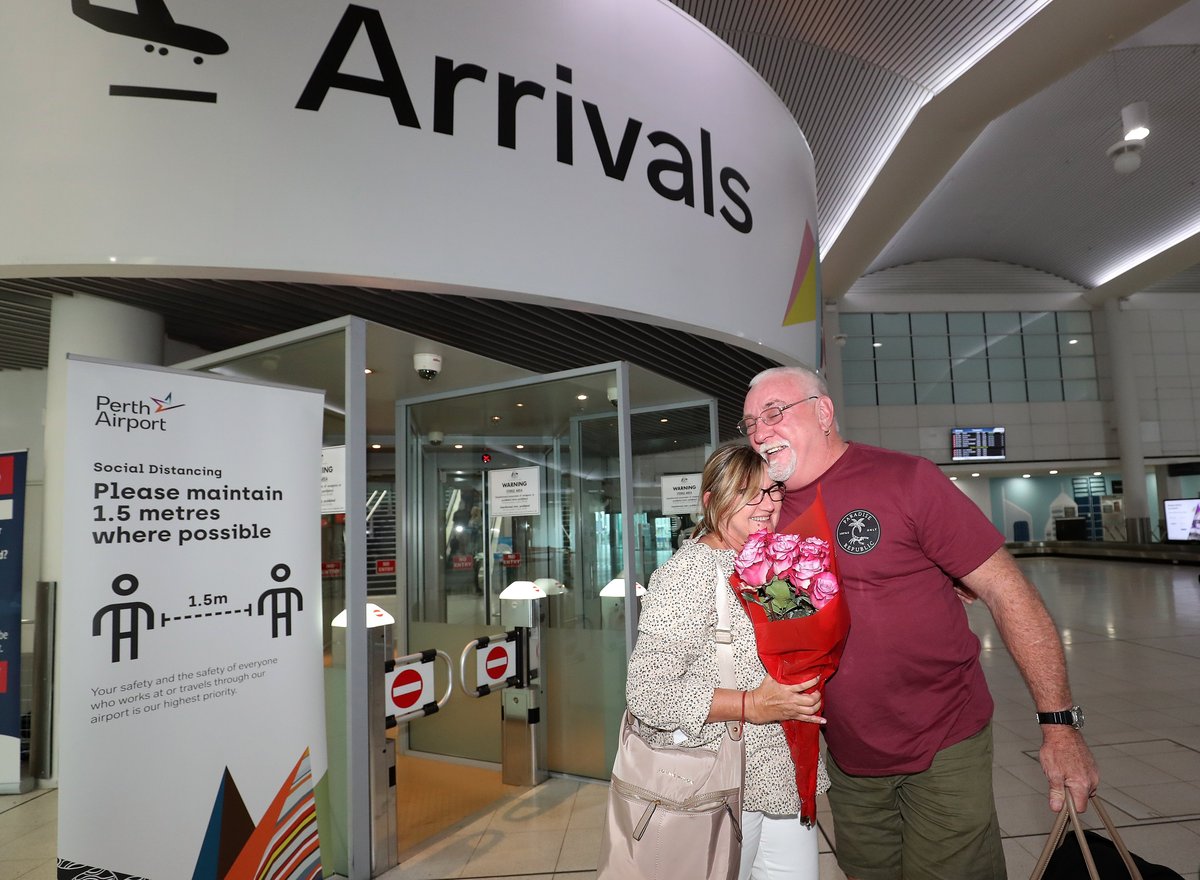 Reunions at Perth Airport after nine months of being locked out. Image: Paul Kane/Getty.

SA travellers will no longer require exemptions to enter WA as of Friday, although they will still need to enter self-quarantine.

Queensland will open up to Adelaide from Saturday as long as there are no unlinked cases in coming days.

The decision by WA to proceed with reopening is significant for those separated from loved ones with Christmas around the corner.

But Premier Mark McGowan is warning the hard border could return "in a heartbeat" if circumstances change, revealing the state will retain police officers at border checkpoints at Eucla and Kununurra and at the airport despite the easing of controls.

South Australia is set to resume taking repatriated Australians with a flight due to land in Adelaide.

International arrivals were put on hold last month after an outbreak of COVID-19 cases linked to one of the state's quarantine hotels.

With the Parafield cluster now largely under control, flights have been cleared to resume with the first to land on Tuesday bringing 72 people from Singapore.

SA resumes international arrivals intake South Australia is about to resume taking in repatriated Australians, despite having no dedicated quarantine facility for positive cases. https://t.co/AAGG87AilK

They will all be tested for coronavirus and, under stricter isolation arrangements, anyone that tests positives will be moved to two dedicated floors in one of Adelaide's medi-hotels.

The two floors will have the capacity to take 43 people, with guests to be spaced out and have access to 24-hour nursing and mental health care.

South Australians will be allowed to return to Queensland from 1am Saturday without having to undergo two weeks quarantine.

China says it has suspended imports of beef from Australia's Meramist Pty Ltd, the sixth supplier to face such a move in a country that is one of China's main meat suppliers.

China, which did not say why it took the latest decision, has already banned imports from five other Australian beef suppliers this year, citing reasons that have included issues with labelling and health certificates.

Australia's ties with top trade partner China, already strained, significantly deteriorated after Canberra called for an inquiry into the origins of the coronavirus.

With many small growers and wineries impacted by last summer's bushfires and the pandemic, the tariff hike of up to 212 per cent could be the final nail in the coffin.

A survey of 65 independent wineries in South Australia found almost half were worried about the future of their business, compared to only 25 per cent last year.

SIA on Monday lodged a statement of appeal with the Court of Arbitration for Sport (CAS), which suspended Jack for two years after she tested positive to the banned substance Ligandrol.

SIA chief executive David Sharpe says the appeal to CAS' appeals division is based on a need for clarity regarding anti-doping legal principles.

"In order to protect athletes and sporting competitions, we must have clarity and consistency in the application of the World Anti-Doping Code."

Sharpe declined to elaborate on the specifics of the appeal, citing confidentiality. A hearing date has not been set.

The 22-year-old Queenslander appealed her ban to CAS which early last month reduced her suspension to two years, finding Jack did not knowingly ingest the substance.

Wage theft to be made criminal offence.

Wage theft will be made a federal criminal offence with beefed up civil penalties to crack down on bosses who underpay workers.

The Morrison government's industrial relations omnibus bill will include a strengthened compliance regime after years of underpayment scandals.

Government’s IR bill proposes new criminal offence for the “most egregious examples of genuine wage theft”. Would carry a max penalty of up to 4 years jail or a $1.1m penalty – or both – for individuals, and up to $5.55m for a body corporate. @australian https://t.co/kMft0or1G7

He said last week's revelations that some blueberry workers were paid as little as $3 an hour on NSW farms showed why the government was acting.

The new offence will carry a maximum penalty of four years' jail and fines of up to $1.1 million for individuals and $5.5 million for companies.

It will apply to national system employers that deliberately underpay one or more workers.

People convicted of wage theft would be disqualified from managing companies for five years.

US doctors warn Trump lawyer might have infected hundreds with coronavirus.

US President Donald Trump’s personal lawyer, Rudy Giuliani, travelled to three different states in the week before he tested positive to coronavirus with doctors concerned he may have spread the virus to hundreds of people.

Trump revealed the diagnosis on Twitter yesterday, with Giuliani saying in a brief statement that he was "feeling good" and "recovering quickly."

Thank you to all my friends and followers for all the prayers and kind wishes.

Recovering quickly and keeping up with everything.

But the 76-year-old appeared at public events, unmasked and not socially distanced, with hundreds of attendees in recent days, including at a hearing with state senators in Georgia on Thursday.

Video footage shows him mingling with people in close quarters.

The U.S. is struggling to get a handle on its COVID-19 surge, with 129 Americans testing positive each minute.

“Giuliani has not just exposed himself and caught covid, but he has potentially exposed hundreds and hundreds of Trump supporters to the virus. …his irresponsible actions have potentially put others at risk as well.” Dr. @meganranney pic.twitter.com/SehMCmxTWM

South Korea's health minister has called the Seoul metropolitan area a "COVID-19 war zone" as authorities in Germany, Greece and Sweden prepare tougher restrictions to halt the spread of the coronavirus.

A World Health Organisation official said on Monday the agency does not foresee countries making it mandatory for citizens to take the new COVID-19 vaccines which have been developed.

In South Korea, new social distancing measures are due to take effect Tuesday evening — as a third wave of coronavirus cases has officials warning of an impending crisis.

In Europe, Germany is preparing to toughen the current restrictions due to the pandemic ahead of Christmas while officials in Sweden have been forced to rethink their hands-off approach amid rapidly rising infection rates.

Secondary schools and universities in Sweden were ordered to close from this Monday until January 6 as part of the latest government restrictions imposed in recent weeks.

Meanwhile, authorities in Greece are considering extending the current lockdown until early January to include the whole of the holiday season.

Globally, more than 66.66 million people have been reported to be infected by the coronavirus and 1,533,752 have died.

The Paris 2024 organising committee had last year proposed the four sports for inclusion and was waiting on a final review by the IOC's Executive Board.

Surfing, climbing and skateboarding are already part of the Tokyo 2020 Olympics, having by proposed along with karate by the Japanese hosts.

Paris Games organisers have said they want to deliver a programme that is in keeping with the times and will attract a new and younger audience.

Under new IOC rules first introduced for the Tokyo Games, Olympic host cities can hand-pick sports and propose them for inclusion in those Games if they are popular in that country and add to the Games' appeal. 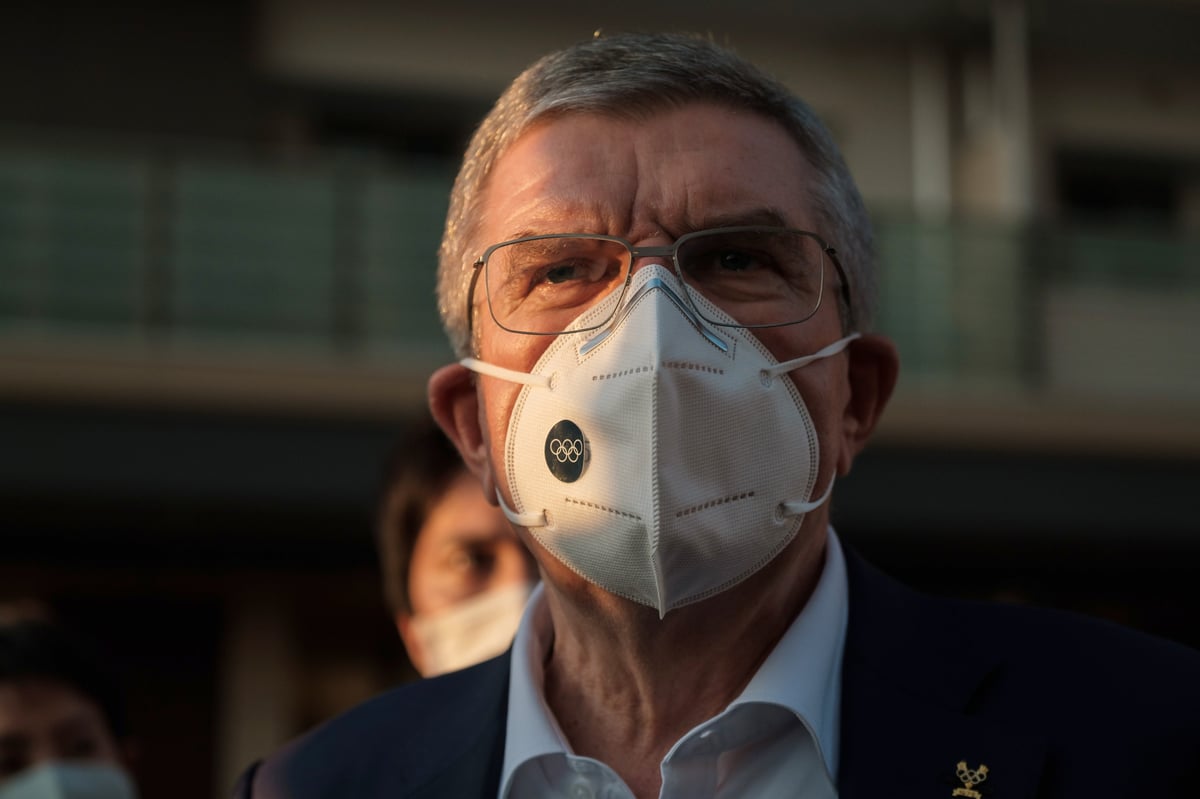 The IOC also trimmed the overall events for Paris by 10 to 329 compared to the Tokyo Games next year while increasing mixed gender events from 18 in Tokyo to 22 in four years time.

- At least one person has died and 300 others have been hospitalised due to an unidentified illness in southern India. Patients have have experienced symptoms ranging from nausea and anxiety to loss of consciousness.