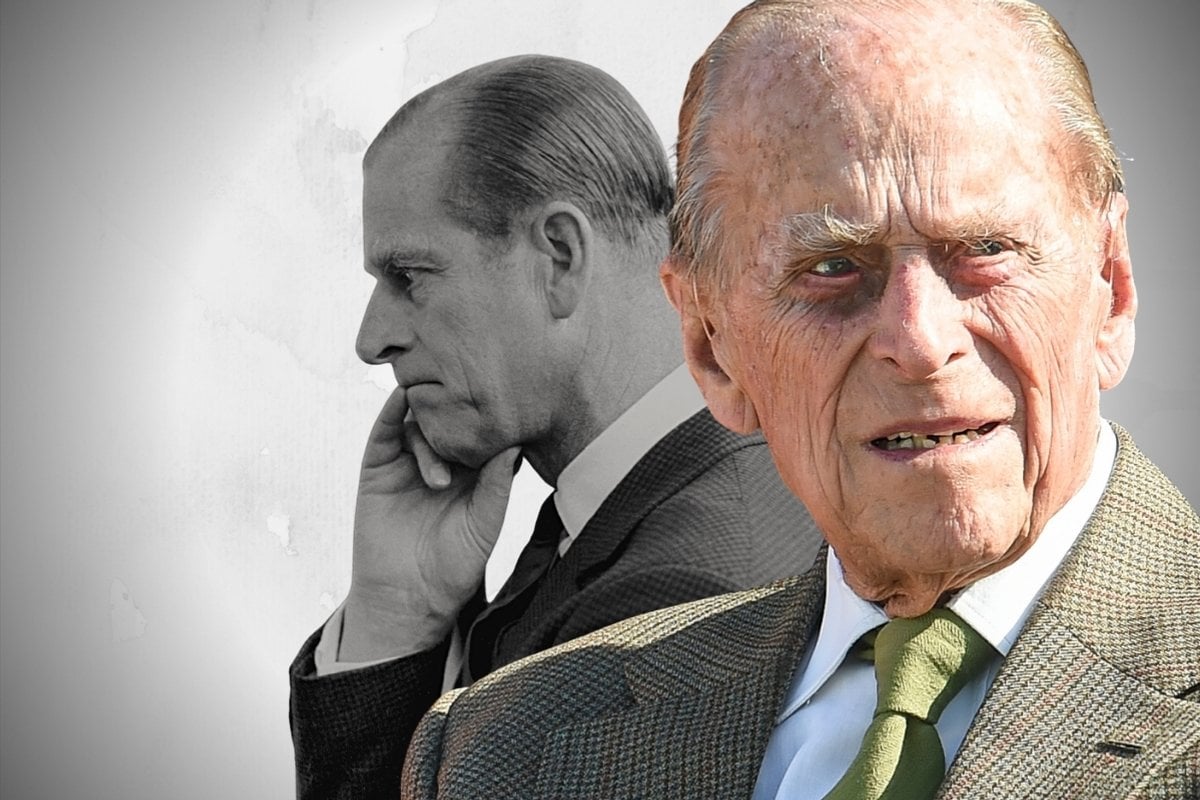 On Tuesday, an elderly man was wheeled to a waiting car by staff at London's Kind Edward VII Hospital.

At 99, he'd overcome an infection and undergone heart surgery, and after a four-week admission, he was ready to begin the next phase of his recovery at home.

There are photographs of that moment. Shot through the windows of his chauffeur-driven BMW, they capture the great-grandfather strapped into the back passenger seat.

His cheeks appear sunken. His complexion, pallid and dry. There are dark circles beneath his eyes. He looks fatigued, even a little overwhelmed.

Listen: Mamamia Out Loud dissect what women are talking about this week, from the culture of Parliament House to the British royals. Post continues after podcast.

Because of who his — Prince Philip, Duke of Edinburgh, the husband of Britain's reigning monarch, Queen Elizabeth II — those photographs were published around the world.

Because of who he is, his appearance inspired memes, jokes and taunting headlines.

He has been compared to "Frankenstein's monster", "a human Ship of Theseus", a zombie. Many questioned whether he was, in fact, alive.

Yes, there is plenty to deride about the Duke.

He once asked a First Nations man if his people "still throw spears at each other". He mocked the President of Nigeria for his traditional robes. He suggested to a 13-year-old boy that he ought to lose weight. And, when remarking on a piece of tartan fabric, he asked Scottish Conservative leader Annabel Goldie, "Do you have any knickers in that material?"

He's hardly a sympathetic figure. And the current mocking mood is no doubt a symptom of all that.

But it's also a symptom of how seldom we see faces like his.

There's an element of shock in many of the jokes about his appearance, even horror. There are suggestions that he should be euthanised. That he looks like a corpse. There are quips about how little it would take to end his life.

Yet that picture simply what an elderly man looks like. That's what a person who is months away from his 100th birthday, and who has just experienced a bout of ill-health, looks like.

Many unkind comments about this pic. But this is what very old age looks like.
And those of us blessed to be in the company of a loved one of this grand age, recognise we too, will go there. pic.twitter.com/MJX2Z8OKhn

Some of us will recognise our parents or grandparents in that face (I certainly do). And courtesy of advancements in health care, more of us will even come to wear it ourselves one day.

But we are an ageist culture. Not only is youth one of our primary obsessions — and commodities — we are so frightened of our own frailty that we avoid confronting what it actually entails, what it actually looks like.

Like a 99-year-old man, with sunken cheeks and pallid skin, exhausted and overwhelmed.

Reply
Upvote
7 upvotes
Personally these photos make me uncomfortable because they're long-lens pap shots of a man who is dying. These photos are exactly why Meghan wasn't allowed to go to hospital, because the British press has no sense of decency and will splash peoples most private, vulnerable moments across the front pages.
C
chrissyinthemiddle a year ago

Reply
Upvote
2 upvotes
@cat I’d say it’s because the press were already camped outside the hospital as it was thought Prince Philip was going to pass away. It's likely that he was seen because BP wanted people to know he is still very much alive… even just.
Also Meghan managed to get to and from the hospital to give birth to her first child without the press knowing. Good on her BTW. And the press were on high alert then. Secrecy is possible when desired.
C
cat a year ago

Reply
Upvote
1 upvotes
@chrissyinthemiddle the fact that the press were camped outside the hospital waiting says it all. Like vultures watching creatures die in the desert.
S
susan.v.miles a year ago