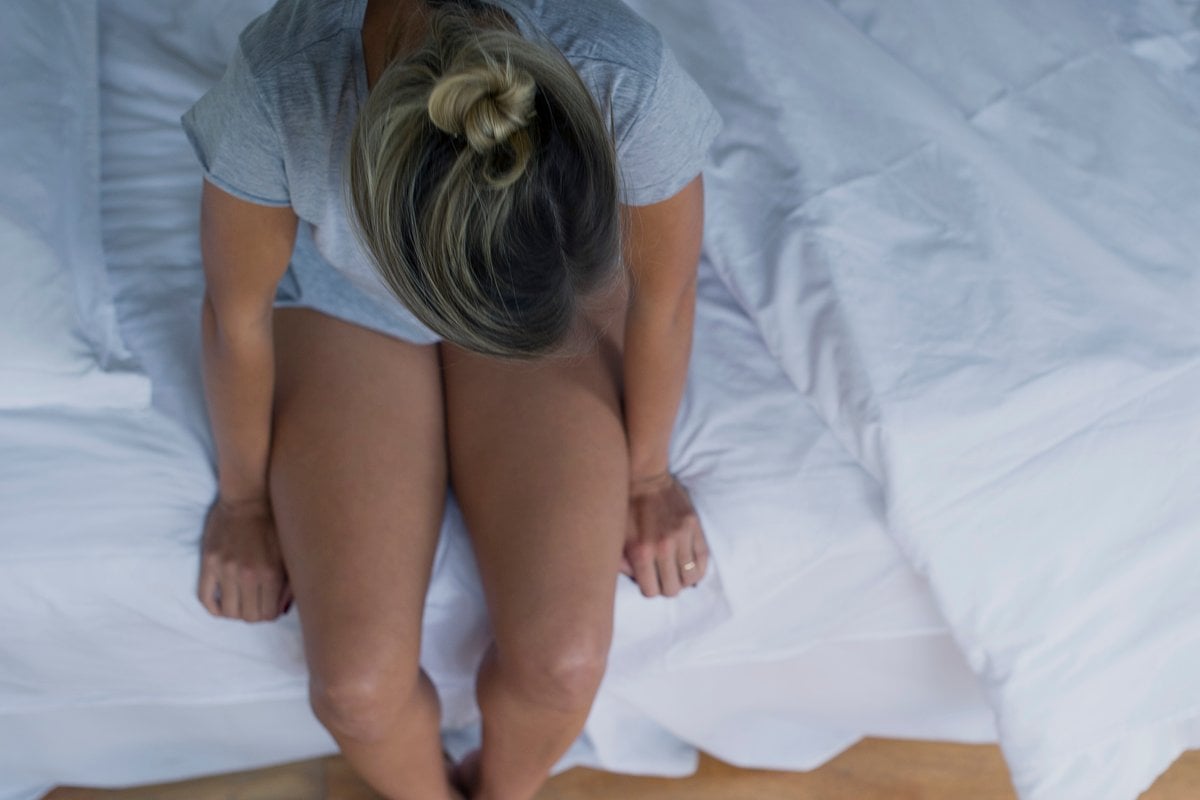 Warning: This post deals with coercive control and may be triggering for some people.

I was young, isolated and at home with a baby. My partner was often home late from work and out on the weekends ‘with the boys’.

Needless to say, I was exhausted.

I felt like a single mum on most days.

There was little to no affection or appreciation from my partner towards me, so unsurprisingly I wasn’t feeling particularly interested in having sex with him.

However, he expected it; throwing tantrums at times when I would say no, punching the bed and making accusations:

“No wonder I’m never home, THIS is why I stay out so late.”

This pattern of blaming and guilting me into sex had started earlier on, in our teens, where he would use non physical tactics to get what he wanted:

“Other girls are doing it, don’t be so boring.”

The insinuated threat of him cheating on me, giving me the silent treatment for days, or the situation escalating into a full blown argument is what made this behaviour ‘effective’.

I would ‘give in’ to sex out of fear and guilt.

It’s a scenario a lot of women are all too familiar with.

Unfortunately, it’s also one we often don’t recognise for what it is: sexual coercion. I know I didn’t.

I didn’t realise what was happening as I had been conditioned to believe men were OWED sex in a relationship - no matter how bad the relationship was, or whether I was having my own needs met both in and out of the bedroom.

Personally, this guilt and shame had deep roots for me, having started from around eight years old after a traumatic incident.

Although my family took immediate steps to protect me and I received counselling, the feeling that I was responsible for causing upset in my family never left – they just grew as I did.

I viewed myself as a purely sexual object, and I was desperate for male attention. Even at 10 years old I remember wanting large breasts and my period, so I could finally ‘become a woman’.

Whilst I had unresolved trauma fuelling this, societal pressures and the overarching culture of gender conditioning only added to the belief that my role was to please men.

In Year 8, a boy I liked ‘dumped’ me because I wouldn’t perform a sexual act on him.

And again in Year 9, another boy I had a crush on told his mates he would only be my boyfriend if I had sex with him...

At the same time, I was watching movies and reading magazines that reinforced the idea that my worth lay in attracting a man. Even the never-ending line of questioning from family members around if I was dating or not - you know the ones - added to this.

Whether it be consciously or subconsciously, many men have utilised this conditioning to get their way.

Whilst it’s important to acknowledge that men also suffer from these toxic pressures, the fact remains that this behaviour is unacceptable.

Using guilt, pressure, belittling and intimidation is abusive, and falls under the marker of coercive control.

Listen to Mamamia's daily news podcast, The Quicky, speak to people who have been through coercive control and an expert who is trying to get the laws changed here in Australia.

Coercive control behaviours can manifest in many ways, however, each one has the same goal; to make you feel guilty and distrust your own viewpoint, so that the abuser gains complete control.

Down the track, this often leads to the outright physical abuse we identify with domestic violence.

But, the shadows of domestic violence creep in long before you see the bruises.

If your partner is behaving in a way that consistently makes you feel guilty for saying no or disagreeing, that is a red flag.

If you no longer feel safe communicating with your partner about how you feel, that is a red flag.

If you can feel deep down in your gut that something is wrong, you are right. You are worthy of feeling safe.

You are worthy of being heard.

You are worthy of respect.

You are worthy, period.

A proud survivor of domestic violence, sexual assault and resulting mental health challenges, Vanessa Haldane is leading the conversation on why rediscovering one’s self worth is the key to leading a happy and fulfilling life. You can find more from Vanessa Haldane on the Journey To Worthy website, on Instagram, or listen to her full story on her podcast.

Reply
Upvote
This is a hugely unreported issue, affecting many women also in seemingly healthy, happy relationships. Men still feel they are entitled to sex as part of a relationship and women still feel sorry for them and say yes when they want to say no. Every time a woman says yes against her own needs, it reinforces to men that their entitlement is legitimate. Just like women have to manage their own biology, menstruation and menopause etc, men need to manage their own biology i.e. how to cope with their sexual urges.  Women don't outsource their menstrual cramps or hot flushes to their male partners to provide them comfort, likewise men shouldn't outsource their blue balls to women to provide them comfort. Men need to deal, when the answer is sometimes or for longer periods,'no'. It's not womens' problem to manage.

Reply
Upvote
@anonymous men really don't understand that this is the majority of sexual harassment and coercion. It starts for every girl when she's 14 or 15 and for most, continues the rest of their lives.
And instead of asking what they might be doing wrong, to find their partners unwilling, men just made sitcoms portraying women as uptight and mean to gaslight us into  thinking any resistance made us unlovable.
News
General
Opinion
True Crime
Politics
Sport
Explainer
Entertainment
Celebrity
Reality TV
Movies
TV
Books
Rogue
Royal
Lifestyle
Beauty
Fashion
Weddings
Home
Wellness
Health
Fitness
Travel
Food
Parents
Before The Bump
Pregnancy
Baby
Kids
Teens
School
Parent Opinion
Work & Money
Money
Finance
Career
Lady Startup
Relationships
Sex
Dating
Separation
Friendship
Family
Real Life
Couples