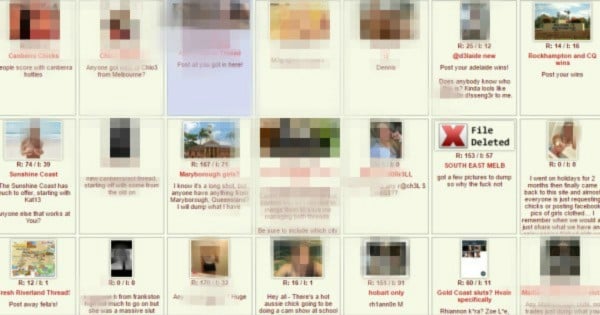 The pornography ring targeting Australian schoolchildren has been found back online and fully operational after police shut it down just 10 days ago.

The ring, known as Aussie Sluts, allows predators to exchange photos of girls through area-specific pages.

The site is currently targeting several east-coast schools such as Newtown School of Performing Arts in NSW and Wheeler’s Hill Secondary College in Victoria.

Universities such as Sydney University are also being targeted.

Women are described throughout the website as ‘sluts’ and ‘bitches’ by a host of anonymous users.

Predators trade intimate photos of the girls on the website and describe them as ‘wins’, an act which provides them with further content.

A spokeswoman for the Office of the Children’s eSafety Commissioner confirmed to the Daily Telegraph the site had returned after being taken down for hosting an image of an underage girl.

The spokeswoman said the image of that girl was no longer on the website and the Office expected further modifications.

“The site’s administrator has been made aware that content on the site breaches its own terms of use. The Office expects further modifications,” she told the Daily Telegraph.

The site is currently active with users posting as recently as today and commentators naming girls and asking if there are any "wins" in the community.

"Christian slut from Cardiff. Everyone knows her. Would be muchly (sic) appreciated," another post reads.

A campaign has begun calling for Prime Minister Malcolm Turnbull to shut down the website.

The petition currently sits on 35,000 supporters with an end goal of reaching 50,000 signatures.

How dare these sh*ts think that they can do this. This needs to stop and charges need to be laid. This is not ok!

What the hell? Come off it, it's time for this sort of bullshit to be illegal. The safety of young women is more important than any blokes sense of entitlement to post whatever they like online.

I don't either. If they are school aged, they are underage and people need to be charged.