On Wednesday night, after a lengthy session in the Senate, the government opted to extend their trial cashless welfare card scheme for another two years.

The controversial program appeared on track to be scrapped when independent Senator Rex Patrick signalled he would vote against it. But Centre Alliance Senator Stirling Griff helped pave the way for an amended version to pass 34-33 in the upper house, by dodging the vote.

The new-look bill will head to the lower house for the final tick of approval.

Labor and Greens senators spent the Senate session labelling the program racist in a series of scathing speeches, with Senator Jacqui Lambie speaking through tears as she reflected on living in poverty on welfare.

Critics of the cashless debit card have condemned the decision to temporarily extend the scheme as a backward step for Indigenous Australians and welfare recipients. https://t.co/hLw1HIMakc

Among the most vocal supporters of the scheme was One Nation's Pauline Hanson who made a series of inaccurate, offensive and racist comments in her speech on the topic.

Firstly, a quick refresher on the card itself.

The cashless debit card (also known as the ‘cashless welfare card’) forces income support recipients to have 80 per cent of their payments quarantined to a debit card that cannot be used for gambling or to purchase alcohol, or to withdraw cash. The remaining 20 per cent of a person’s payment is placed into their normal bank account.

Currently, there are trials going on in communities in SA, WA and QLD, and eligibility varies by trial site. For example in Bundaberg and Hervey Bay, the card only applies to people aged 35 years and under who receive JobSeeker and parenting payments.

In other sites, all working age recipients getting income support are forced to use the card.

There were a lot of questionable things said in the Senate yesterday as the card was debated, but it's Hanson brash approach that's making headlines in the aftermath.

Watch: Here's some of Hanson's speech. Post continues after video.

Let's unpack what she said.

1. "When you go on the welfare system, you've lost your rights."

Hanson is of the belief that the welfare card is "not about rights" because people on welfare have "lost their rights".

Instead, she thinks they have a "responsibility" to taxpayers to not spend their "hard-earned dollars on alcohol and drugs and gambling".

"What the government's card is ensuring is that this money is spent on food, clothing, essentials that they need...that's what this card is about. It's not about talking about a person's rights," she said.

By Hanson's logic, the aged, veterans, disabled, mothers, fathers, childcare providers, carers, and families have all relinquished their rights by using government welfare. Unemployment benefits are actually one of the smallest expenses in the welfare pool. 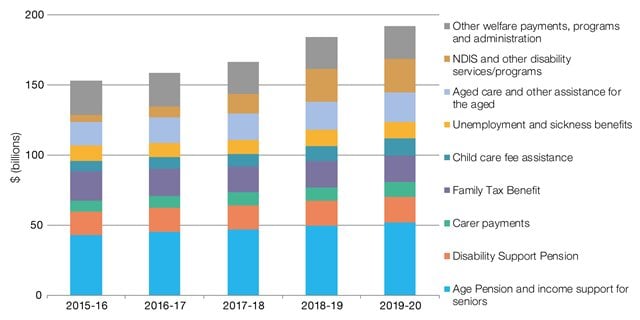 How welfare is used. Image: aph.gov.au.

In 2020, many of those who are now finding themselves unemployed have lost their jobs because of a global pandemic. But according to Hanson, once they reach out for help from the government, they relinquish their rights.

It's an offensive rhetoric, but it's also completely false - and is lumping a very small minority who might misuse the welfare system, in with everyone else who relies on it to survive.

2. "We've got third and fourth generation who are on welfare because it becomes a way of life."

"Dole bludgers" has long been a term many Australians have used to describe those on welfare, and Hanson's remark is an extension of this belief.

She is of the opinion that generation after generation continues to go on welfare because it "becomes a way of life," without realising that this isn't a life they actively choose. In fact, they often have no choice but to turn to welfare.

Let's look at Indigenous populations as an example, given that's who the card is disproportionately affecting.

Before the pandemic, the employment rate for Indigenous Australians was 49 per cent, while for other Australians it was 75 per cent. That's due to a myriad of reasons including lower levels of education, poorer health, living in areas with fewer market opportunities, higher levels of arrest, and blatant discrimination from employers.

Mum was almost left homeless and was forced to take a property she hadn’t viewed due to limited time and options way out of town.

We are punished for the conditions of life violently imposed on us for being Aboriginal.

The #CashlessWelfareCard is f*cking racist to its core.

Increasing employment rates have been cited as key to reducing the disadvantages experienced by Indigenous Australians but in a chicken verses the egg situation our government is not helping, properly, at either end.

We need a more active labour market policy that creates suitable job opportunities for those receiving support. Because at the moment we do have generations on welfare, because the core issues they are being faced with are not being addressed.

Throughout the entire speech Hanson's commentary was littered with racist undertones, as demonstrated above.

But the entire cashless card itself has been labelled racist, with Labor, the Greens and welfare groups all declaring the policy as punitive, ineffective and racist, given it disproportionately applies to Indigenous communities.

The #CashlessDebit card is the 21st Century equivalent of rations and a new Protection Act.

Surprise, surprise, they can't tell us why it isn't racist.

Racism awareness should be mandatory training in this place. #auspol pic.twitter.com/u9afbsopFp

The government has refused to release an evaluation report into the scheme, but The Guardian has had access to some of the research which shows there was "little consensus" the card was working.

“I can’t let go what Senator Thorpe said earlier in this chamber. She commented that it’s her land,’’ Senator Hanson said.

“Senator Thorpe talks about her land. What about the white part? Where’s her white father in all of this, who I should say is a member of the One Nation party?.”

Deputy President of the Senate Sue Lines was forced to step in and demand Hanson retract her comments.

But alongside Hanson's blatant racism, there were plenty of more subtle attitudes made obvious as the scheme passed the Senate.

Perhaps that's the bigger problem here. The 33 other people, Hanson aside, that voted for a scheme they've been told time and time again is flawed, racist, and most importantly - not working.

Reply
Upvote
4 upvotes
Australia has almost 20% of all pokie machines in the world. Disabling those and restricting their use would improve life for millions of families almost overnight. If this government actually cared about these issues they would be focused on things like that rather than restricting the freedom of the victims.
mamamia-user-936684540 2 months ago

Reply
Upvote
2 upvotes
The reason the card was introduced was that giving people totally financial autonomy wasn’t working .  There were children going hungry while their caregivers gambled, resulting in removal of children from families. So this system is flawed.  Maybe the alternative is flawed too.
laura__palmer 2 months ago

Reply
Upvote
3 upvotes
@mamamia-user-936684540 Most people receiving a welfare payment are not doing that, though. Why should everyone be punished because a few have addiction problems? Wouldn't it be better to target the issues and to target those with problems (as in get them help), rather than debase people who need welfare?
snorks 2 months ago

Reply
Upvote
@laura__palmer Perhaps, but that would also lead to the problems in the Conversation article you linked too.
laura__palmer 2 months ago

Reply
Upvote
@snorks what would?
snorks 2 months ago