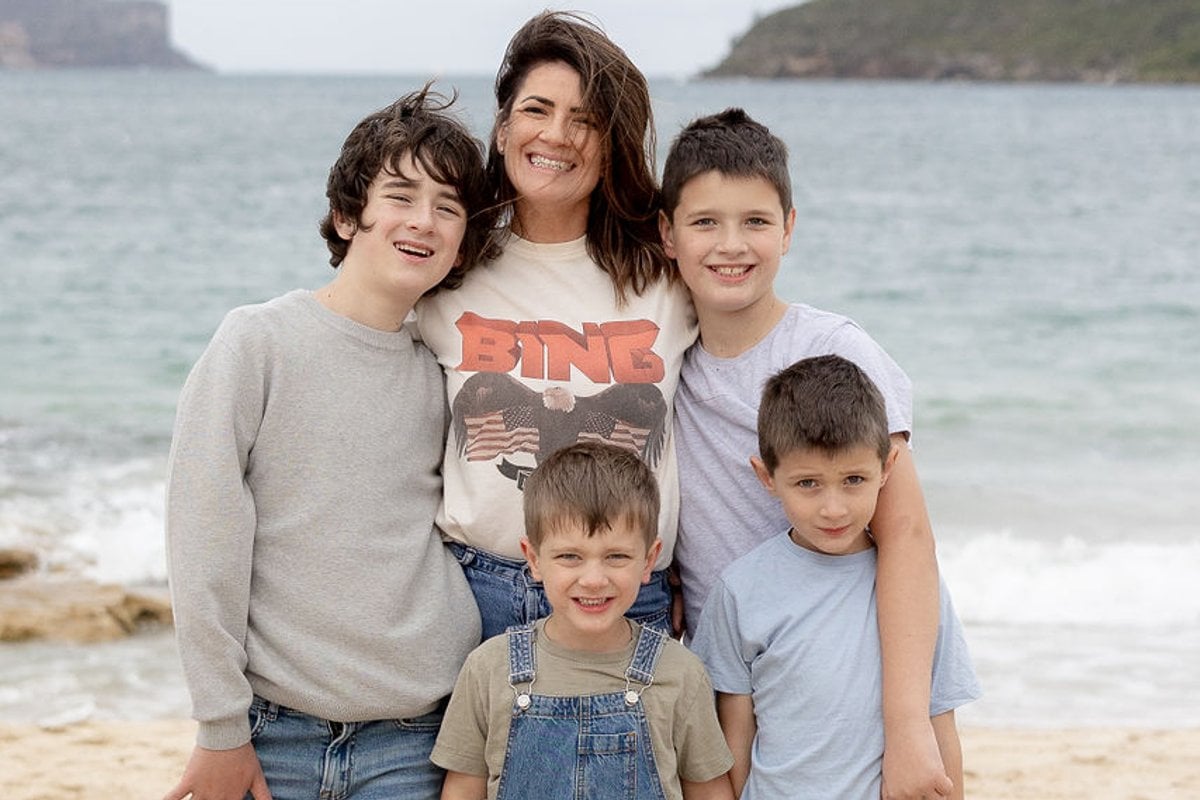 I have four sons. I have had a child at home with me for 12.5 years now. They say the days are long and the years are short. But with four boys born in seven years, there were a few years there that moved slowly.

It feels like a blur of superheroes, in my house, in my car, and often, in my bed.

﻿Next year, my youngest son starts primary school. My boys are now aged five, seven, 10, and 12.

I am technically in the golden years. Out of the nappies, the toddler stage, and the sleepless nights, and not yet into the peril of teenagers. ﻿

Many people often make assumptions about what my life must be like as a mum of four boys, however, I think what we think we know about boys isn’t the full story.

If you search articles on "10 things I know about being a mum of boys", here’s what you’re likely to find: mess, movement, rumbling, fighting, damage to your home, pee on the toilet floor, and farts. Lots of farts.

And while I relate to some of the above, I reckon it’s missing the point.

Boys are huge hearted, divine creatures, who are soft and loving. And the secret to understanding just how big-hearted they are lies in understanding the way they play.﻿

Lots of boys want to be heroes: the one who does right, saves the day, and saves the world.

I have spent 12 years with these big feeling, big moving, big-hearted humans. And I've learned that they love heroes because the idea that there are GOOD guys who can defeat all the bad guys somehow makes the complexity of life feel workable for their huge hearts. 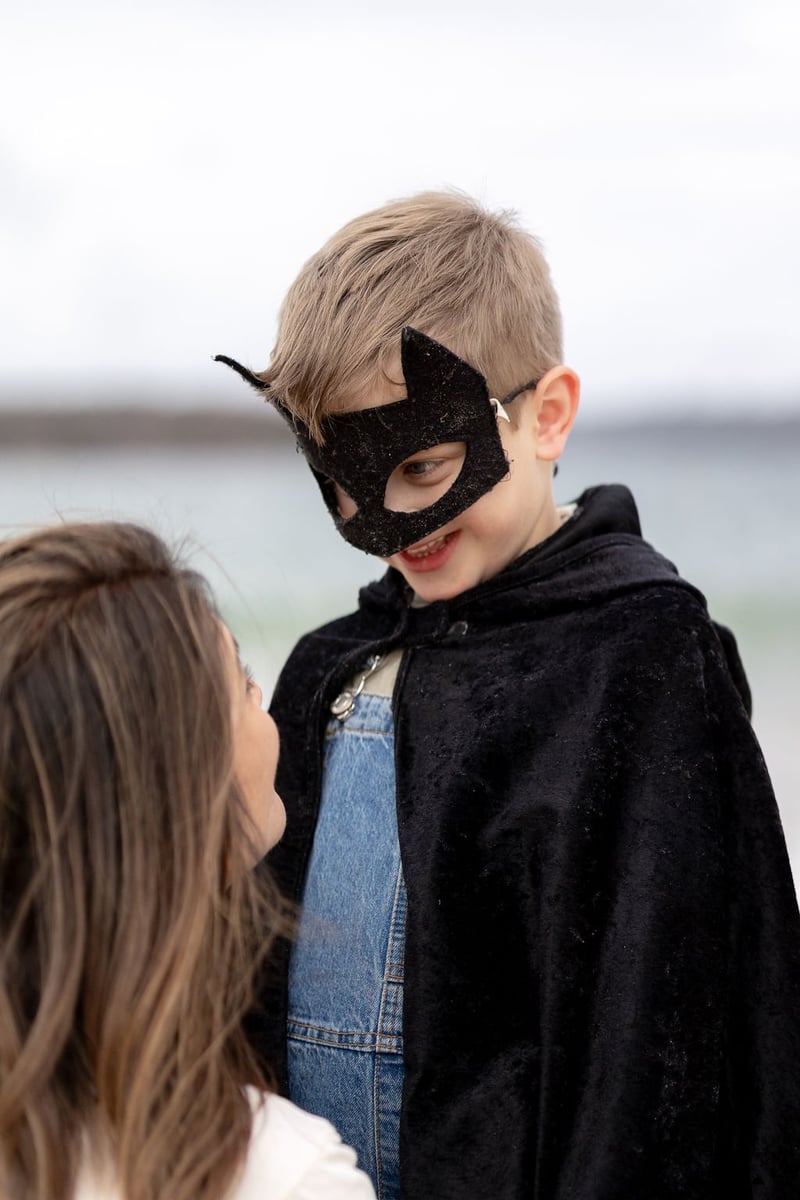 As an obstetric social worker and parent educator working with families of children aged one to five, I am often asked about how to connect with all kids, but especially our little boys - who seem to connect... differently.

I think one of the best ways to get a sense of what our little boys need is to tune into the way they play. The fact they love heroes tells us a lot about their inner worlds.

So, here are three things that a decade of living with little boys has taught me about the huge hearted superheroes that are our sons: ﻿

1. They connect through shared interests and side by side.

It’s common knowledge that if you ask your son how their day was face-to-face as soon as you pick them up, you won’t get more than a grunt in reply.

This can have us thinking they don’t have much to say, or don’t want to share their inner world with you, but they actually do.

The secret to actually hearing about your son’s inner world? Get alongside him. LEGO, movement, ball sports, even driving around in the car.

Boys are just as wired for connection as girls, but unlike girls who really enjoy and relate to face-to-face communication, boys go better side by side.

In her book From Boys to Men, parenting expert Maggie Dent wrote:

"It is interesting that women often prefer direct eye contact to men and boys, and many boys can find eye contact threatening. Demanding that a boy maintains eye contact with you is more than likely putting him into a position of threat that will trigger his amygdala and mean he will be unable to listen to what you are saying (just in case he needs to run to survive an attack on his life). Don’t insist on or expect direct eye contact!"﻿

One of the best connection strategies I have heard of came from a dad in one of my classes who spoke about how much his son loved the garbage truck coming each week. So, they made a date to go out and enjoy that moment each week.

Special time, shared love of that garbage truck, side by side. ﻿

2. They desperately want to please you, but their bodies have other plans.

They desperately want to be the 'good guy' and the 'hero' in your life, but they don’t always get it right.

We all know that boys need to move. Evidence says they are really only ready to sit for long periods of the day from seven years old.

However, we pop them in school at five years old and wonder why they fall off their chairs, can’t write neatly, and disrupt the class.

Here’s the thing you need to know. They just can’t help it.

It’s not a matter of being naughty, bad, 'too busy', or wrong. They have bodies that are telling their brains to move, to explore, to run and jump and climb.

When we contain that urge, we are telling them to ignore their body. That the urges they have to move make them bad, wrong, and 'too much'.

There is evidence that boys develop the ability to sit still a bit slower.

According to Steve Biddulph, author of Raising Boys: "The slower development of boys' fine-motor skills, and their cognitive skills generally, suggests they would benefit by starting school later - and so move through school a year after girls of the same age."

Similarly, speaker and educational consultant Tom 'Teacher Tom' Hobson says we need to make allowances for the way boys move, as well as understanding the need to wrestle.

"Allowing wrestling and roughhousing can also help boys manage their emotions and friendships.

"Wrestling can be an act of love between boy."

Tom says many adults misunderstand boys' motives and stop what they view as aggression.

3. They often can’t wrap words around 'what’s up'.

They might be causing fights, doing something you’ve said 105 times NOT to do, pushing boundaries, or adjusting to a new sibling.

You might want to tear your hair out, or list them on eBay some days, but if you ask 'what’s wrong?' you won’t get anywhere.

Every now and then, when one of my four boys has given a small (or very large) cue that they need connection, I will stop everything and go in for a hug.

I hug them for dear life as if I am never, ever going to let go. As if I don’t actually have a million emails to answer, as if that basket of washing has already been magically folded and put away, as if there is no other child nearby also competing for my attention.

And when I do, what I can tell you is that each of my four boys will mostly hang in this hug for an almost uncomfortable amount of time. 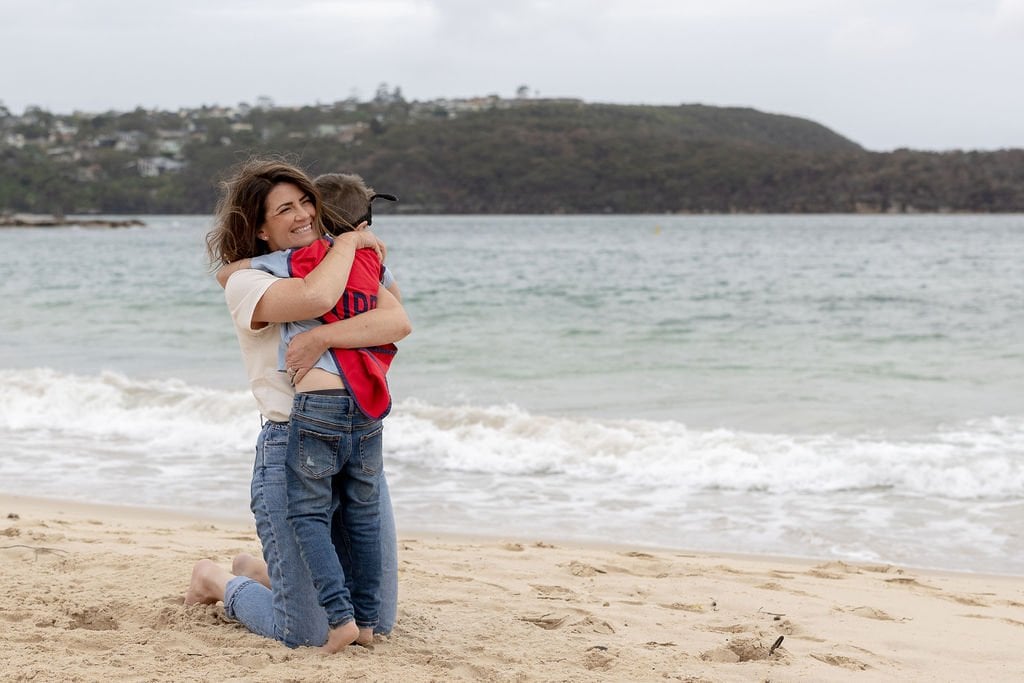 I often joke that the thought that has often gone though my head during one of these hugs is, 'I may just grow old and die in this hug it is taking so long'.

The discomfort in me tells me how often I’m ending hugs because of my 'to do' list. Because it’s drop off time or bedtime and there are a million things I need to do. But also, am I assuming that because they are boys, they don’t ache to be hugged and held?

But the discomfort of hanging in there always pays off because, let me tell you, the look on their face when they finally wriggle out is softer.

Their body looks lighter: as if somehow a weight they had been carrying has been lifted.

I can’t help but wonder if the weight they sometimes carry, on those days where nothing is right, is the same weight so many of us carry - even as adults - wondering if we’re enough?

These little, yet big-hearted boys, who hate when they get it wrong, and want to feel like the good guy, the hero, and the centre of your universe.

What a privilege it has been to have four of these huge hearted humans in my home, my bed, in my car, and in my life.

And as my baby prepares for school, I will keep reflecting on how there have been too many moments to count where the chaos looked (and felt) absolutely unmanageable and yet, the love from these boys has not only filled my heart, but opened it up further.

So much so, that I now too believe in the good guys, in heroes, and the power of love. But don’t ask for the Batman capes just yet...

I am not quite ready to give them up. ﻿

Genevieve Muir is an obstetric social worker, parent educator and mum to four boys with a passion for helping parents in the first five years of parenting. Gen works in a busy maternity hospital in Sydney, and also works privately with families though online programs, parenting groups, and one-on-one sessions. You can find her on  Instagram or on her website.

Reply
Upvote
As a mum of seven sons, aged 12 - 28 I resonate with the awkwardness of young men, and their need to be perpetually busy, they have a zest for activity and were forever roping a sibling in to come and burn off some steam with them.  They are incredibily honest - I have been treated to opinions and comments that just erupt from their mouths, with no forethought or consideration of the implications of their words.  But they have equally always had a hug for their mum, albeit one coming from a great height over the top of me these days, and I know they would always be there for me if the chips were down.  Letting them go as they age, has been the hardest lesson, but the pride of watching them find their own path, has equally filled me with joy as their mother.  I am the oft pitied mother of all boys, but, as other boy mums would agree, we are truly the lucky ones - and we wouldn't change a thing.
F
fzmclaren 3 months ago