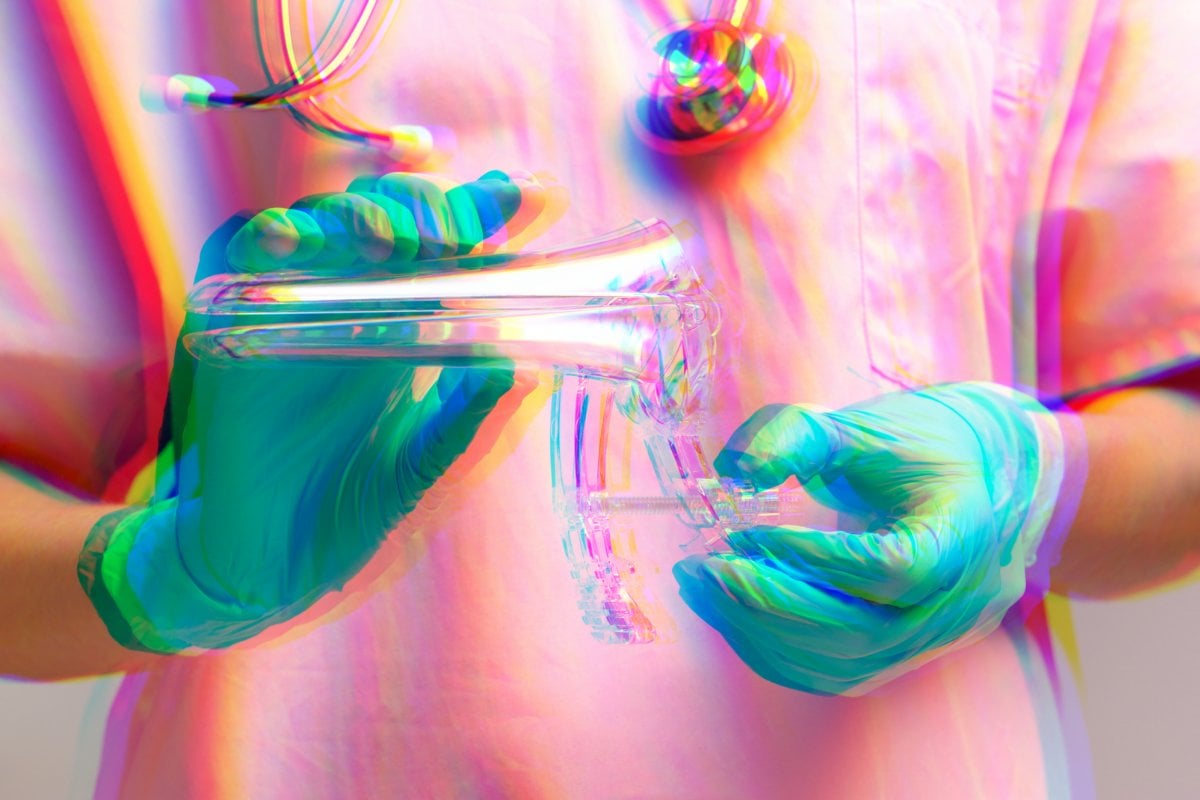 Pap smears are something precisely no one looks forward to.

It's a semi-invasive check-up that involves whipping your undies off and being prodded in the vagina by a doctor with (far too often) very cold hands. Right?

Well, yes and no.

Watch the juiciest responses from the Mamamia Sex Survey. Post continues after video.

You see pap smears actually come in a variety of forms, and they may have changed a lil' since your last swab-tastic-session - as we've just learnt via the very informative gals on Mamamia's podcast, The Undone.

So, we've decided to round up every concern/worry/manic-panic you may have had about pap smears and run them by a pap expert, so we can all breathe a little easier when we book in our next appointment.

Myth 1. "You need to get a pap smear after you lose your virginity."

Actually, you should start having regular pap smears once you turn 25 years old - regardless of sexual activity. (FYI the advice used to be for those aged 18 to 25 to have their first screening, but that's changed as now most women under 25 have been vaccinated for HPV.)

For those who have some contradicting inner voice saying, "no, no, you're meant to have them the second you start having sex," don't worry, you're not losing your marbles. As mentioned, Things have just changed on the pap smear scene.

In their chat with Dr Ginni Mansberg, The Undone hosts Emily and Lucy got the cold, hard, gloved facts on what the lay of the land is now.

"So, we got some changes in 2019," Dr Ginni said. "When we changed what we do with the cells that we take during the cervical screening tests."

The physical collection of the cells remains the same, but the process afterwards differs. According to Dr Ginni, previously a pathologist would take the collected cells and "rub them on a slide and fix them with a kind of setting spray".

"The pathologists would look at that and give a report and it was really long and clunky, sometimes took us two weeks to get the pathology back on those things. And then we worked out that the changes are nearly always caused by a virus called the human papillomavirus, which is a wart virus, and it's a sexually transmitted virus."

So, the clever docs reviewed the process and simplified it so that they're just looking directly for that specific virus, and if they get a positive result for that then they run some more tests.

However, if you get a negative result, then "no further action is required, and in five years you come back".

This is the assumption, and we're going to be honest with you - they are not as joyous as a night in front of the telly with a tub of ice-cream, BUT it's honestly not that bad.

And good doctors will do their absolute best to make you feel as comfortable as possible.

Dr Ginni walked through the pap experience on The Undone so you could get a clear picture of what's ahead for you and your vagina.

Listen to this very episode of The Undone (how convenient!) right here. Post continues after podcast.

"I always make sure it's really warm and really comfortable. There'll be a curtain that will be pulled across so that you can undress in private. But, I do need everything from the waist down exposed, but then you'll be given a sheet to cover yourself up so you'll be lying under a sheet. Think of it as a little safety blanket for you."

Then it's time to crack on. And this is exactly what will happen.

And for those with their hands up in the back asking, 'Umm, what's the pain level of this malarkey?' Dr Ginni says: "It shouldn't hurt. It's just a very soft like, think of your softest toothbrush on it. The bristles are slightly wider than a toothbrush, but it's that soft."

So very little discomfort and nada embarrassment. Just as it should be.

Myth 3. "Pap smears take a super long time, and you're just lying there, hating every second."

"From the minute you lie on the table to being back up and wipe yourself down with a tissue is probably three minutes," says Dr Ginni. "The process of explaining it and making sure all your questions are answered is a little bit longer, but the procedure itself is super short."

Myth 4. "Doctors use a bigger sized contraption on you if you're older or have had a kid."

You know that massive duck-bill shaped thing they use to snoop inside your vaginal canal during a pap smear? Well, firstly that's called a speculum, and secondly, lots of people think doctors will use an even bigger one on you once you're over 30 or have given birth to a child.

This, luckily, is not super accurate.

"While they come in small, medium, large and extra large, I only use the smalls on absolutely everybody," says Dr Ginni.

"Whether they have vaginismus or not, I just don't find you need a bigger speculum that just does the job perfectly. The small one that I use is about 10 centimetres long and about two and a half centimetres wide. So that's quite small. And when I show girls who've never had a pap smear or a cervical screening test before, I normally say hopefully that is a lot smaller than a penis. So if you've had a penis in there, you can have this in there without a problem."

Myth 5. "You can test for STDs while you have a pap smear."

While a pap smear is technically an STD test as it's looking for signs of the human papillomavirus (HPV), you can't easily roll an STI test in with this procedure.

RUDE. Why is that? Well, some STDs need to be tested with pee samples, which is not a part of the pap smear.

However, according to Dr Ginni, gonorrhea can be spotted during a pap smear because it is "very green and very noticeable". Lovely.

Myth 6. "If you're in a monogamous relationship, you don't need to have a pap smear."

As we've just learnt, a pap smear is essentially an STD test (for HPV), so if you and your partner have been regularly bonking just each other for all eternity then there's no need to do this, right?

"In my life as a doctor, I cannot tell you the number of people who develop a positive pap test result, even though they've been married for 15 to 20 years," shares Dr Ginni. BUT HOW.

"Unfortunately, we do see a lot of sexually transmitted infections inside monogamous relationships. And while there's a chance that someone has been carrying this for 20 years, and it was laying dormant, and now they've transmitted it to a partner... it is quite unlikely."

So, yes. It may mean that your partner has been a bit dodgy, as "they tend to come up within six months of a new relationship".

Interestingly, NO. Because now there are self-sampling tests that you can do from home.

"Just say to your doctor, 'I just don't feel confident to have a pap test in person and I would just like to do it myself'. Then they'll send you an at-home test," explains Dr Ginni.

...But once the package arrives along with your four thousand online shopping orders, what do you do?

Dr Ginni says that the kit will have a little cervix brush that "you just basically insert that into the vagina, turn it around three times, and then put it into the water pot and send that off on your own".

Then the professionals will run the tests for the human papilloma irus, and if you're all clear then you're done for the next five years!

Sound like a cute night in? Yes, yes it does.