Quentin Tarantino’s Once Upon A Time In Hollywood is not a true story, but it intertwines characters based on real people and plot points based on real events.

And if you’re not familiar with 1969 Hollywood, it can get a little… confusing.

Check out the Once Upon A Time In Hollywood trailer below. Post continues after video.

Here’s a debrief on what exactly went down in real life and what definitely didn’t, and just a warning: the below includes many spoilers!

Proceed at your own risk. 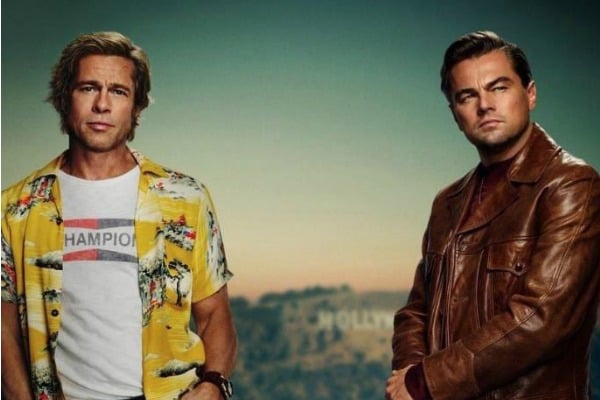 The two main characters in the movie, aging actor Rick Dalton (Leonardo DiCaprio) and his stunt double Cliff Booth (Brad Pitt) are both fictional, but their story lines weave in and out of real-life events. In the film, Dalton's next door neighbours are Sharon Tate and Roman Polanski and later on in the movie, Booth picks up a hitchhiker and takes her home to Spahn Ranch – the infamous headquarters of the Manson Family.

In reality, the closest neighbours to Tate and Polanski's home at 10050 Cielo Drive in Los Angeles were about 90 metres away – far further than Dalton's house appeared in Once Upon A Time.

On this episode of Mamamia’s daily entertainment podcast, The Spill hosts Laura Brodnik and Kee Reece give a spoiler-free review of Once Upon a Time In Hollywood.

The Manson family and Spahn Ranch.

Those 'crazy hippies' Pitt's character Booth met at the Spahn Ranch were based on real people, and the ranch really was an old movie filming set owned by George Spahn.

Spahn was 80 years old and going blind when he allowed the Manson Family to move in rent-free in exchange for daily chores and help running the horse-rental business.

The Manson Family was a cult led by Charles Manson. According to group member Susan Atkins, the Family believed that Manson was a manifestation of Jesus and believed his prophecies that an apocalyptic race war was imminent.

In the films final scenes, Rick Dalton and Cliff Booth kill Manson Family members Tex Watson, Susan Atkins and Patricia Krenwinkel in self defence after they break into Dalton's house and attempt to kill everyone inside.

Watson, Atkins and Krenwinkel's gruesome fates in the movie are not real. The trio actually murdered five people at the home of Sharon Tate and Roman Polanski and took part in the murders of Leno and Rosemary LaBianca the next night.

In the film, Pitt's character cannot quite recall Tex Watson's name and the character, played by Austin Butler, taunts him with a line the real Watson gave his victims: "I'm the devil and I'm here to do the devil's business."

All three, as well as other members of the Manson Family, were tried and sentenced to death, but their sentences were commuted to life in prison after California's Surpreme Court invalidated death sentences imposed before 1972.

Margot Robbie's character, Sharon Tate, was based on the real-life actress.

The scene where Robbie, as Tate, watches her performance in The Wrecking Crew at the cinema shows the real film, starring the real Tate.

Tate's relationships in the film – with both Jay Sebring and husband Roman Polanski – were also real, as was her pregnancy and her address: 10050 Cielo Drive.

Unlike in the film, Tate and her unborn child were murdered by Tex Watson, Susan Atkins and Patricia Krenwinkel, members of the Manson Family, on August 8, 1969. Her friends Sebring, Wojciech Frykowski and Abigail Folger were also all murdered at the home.

Like in the film, her husband Polanski was in London at the time for work.

Tarantino has a habit of rewriting history, and he's done it again with the Manson Family and Sharon Tate's fates in Once Upon A Time In Hollywood.