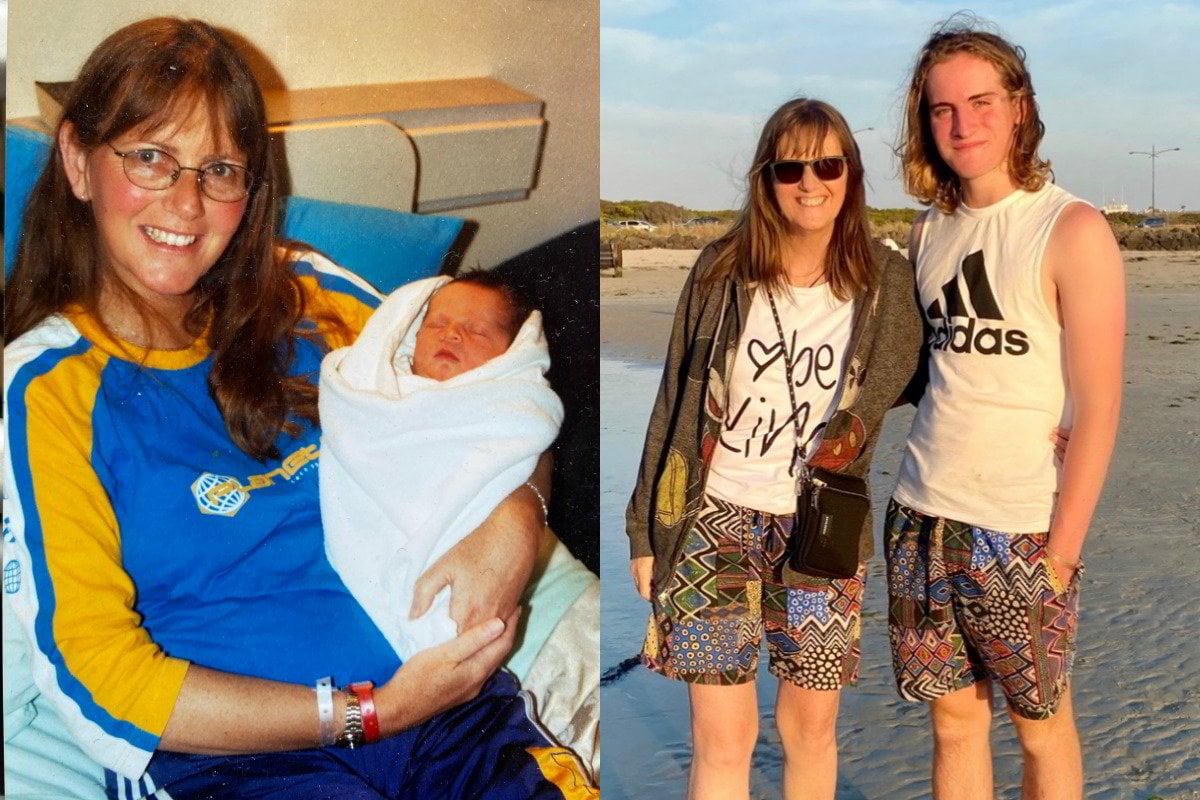 When I turned 40, the thought of having another baby was far from my mind. I had two beautiful girls, my then husband had had a vasectomy and, having experienced an ectopic pregnancy between the girls, my reproductive viability was severely compromised.

Then, when I was 41, my marriage ended and I met and married a man much younger than me who had no children of his own. That he would be sacrificing his opportunity to be a biological father worried me, but he was adamant that it wasn’t a factor and couldn’t be a barrier to us being together.

Nonetheless, after watching what a great stepfather he became, I began to harbour a secret hope that maybe we could have a baby together. We agreed that we would try without trying; we would not seek fertility treatment or pin our hopes on a ‘what if.'

He was more "c’est la vie" than me. I made lifestyle changes, tracked cycles and ovulation windows and suffered silently through each month’s disappointment.

12 months after we were married I was enough days late to take a pregnancy test. The positivity of that was soon washed away with an ultrasound showing a blighted ovum. Six months later, another positive test, another miscarriage.

On my 45th birthday the GP suggested my reproductive window was closing and I should consider contraception.

I made an appointment for a couple of months later to have a Mirena put in, but the week that appointment was due, my period was a couple of days late (yes, I was still counting!) and the two pink lines were stronger than anything I’d seen on a pregnancy test before. They were positively neon, and I can still feel the thrill and the frisson of terror that accompanied them.

My husband was calmer and more resigned to the (inevitable) fate of this embryo. He didn’t come to the six week scan because we agreed that it might be less stressful for me to see the bad news alone.

I lay on the scan table, closed my eyes and ran through my plan for coping, my plan for the D&C, my plan for the exciting things we would do instead of having a baby. The radiographer had to nudge me to look at the screen… and there it was, the blip, blip, blink of a heartbeat.

Our first obstetrician’s appointment did not go well. I was hoping for warmth and congratulations but her first question was, “Did you get pregnant on purpose?”, followed by, “You do understand your chance of Downs at this age is 1:7?” and then a list of options, the last of which seemed to be have a baby.

I tried to rationalise her treatment as concern; Geoff was furious and told the poor receptionist that our health cover should be enough to ensure we never saw that doctor again.

We opted for a CVS (chorionic villus sampling) test at 11 weeks rather than the amniocentesis test at 14. In hindsight I felt bullied into the testing because the results were irrelevant to us.

It was at this stage we told the girls about the pregnancy. I was terrified, especially of my 18 year old’s reaction, but she was just relieved – she’d worried that the simmering anxiety in the house was because I was sick.

At the CVS they stuck a great big needle into my stomach and as they did, a tiny little hand appeared on the screen. Involuntarily I reached out to touch it, and at that moment I knew this baby was going to make it.

The pregnancy was a breeze, even for an ‘elderly multigravida.’ I wasn’t sick at all. I worked, as a teacher, right up until two days before the birth. Because of my age, I was booked to have an induction at 40 weeks but, like a trusty old alarm clock, my water broke on the morning of his due date.

The girls were there to see their brother the minute he was born and he melded our family together in a way that no other event could have.

Did I worry about having a baby at (almost) 46? So many worries, mostly fostered by others. “Do you think it’s fair to the baby?" "What if you die?" "OMG, you’ll be a pensioner before he leaves school.”

Listen to Mamamia's fertility podcast, Get Me Pregnant. Post continues below.

Tomorrow’s worries deprive today of happiness, so I acknowledged them and then buried them. It’s a fact that Taine won’t have his mum around as long as his sisters will and that makes me sad, but I can’t change it. Like anyone faced with a shortened span of life events, we have always worked on quality time.

Now that he’s turned 17, I’m a bit more relaxed. Taine’s (almost) self-sufficient, he has a fitness freak father who might live till he’s 100 and he has two amazing big sisters who will fill my role as the mother figure no matter how old he is when I leave him.

The upside for him is that financially we’re in a much better space than when his sisters were eating off plastic tables in a rundown rental, and we have much more time to devote just to him (I realise this is not necessarily an upside for a 17 year old!)

Together we have travelled the world. We share his love of theatre and we’ve never missed any of his footy or cricket games.

The downside for the kid is that we’re maybe a bit stricter than some of his friend’s parents, and also that his exposure to adult conversation has matured him early, giving him a strong social conscience that sometimes puts him at odds with his peers. He’s had girlfriends whose grandmothers are the same age as me and I guess that’s a bit odd, but it doesn’t seem to phase him much.

The upside for me is that being a mother is my greatest pleasure and because of Taine, since I was 26 I’ve never been without a child in the house.

Watching him grow has been my life’s delight; one I sometimes missed with the girls because I was always so eager for them to reach the next milestone. With experience, I’ve learnt to pick my battles, so we rarely fight.

To keep up with the toddler/child/teenager, I’ve had to keep fit so I’m more aware of keeping myself healthy. With my four (and counting) beautiful grandchildren, I have a built-in, playmate uncle to help me babysit. 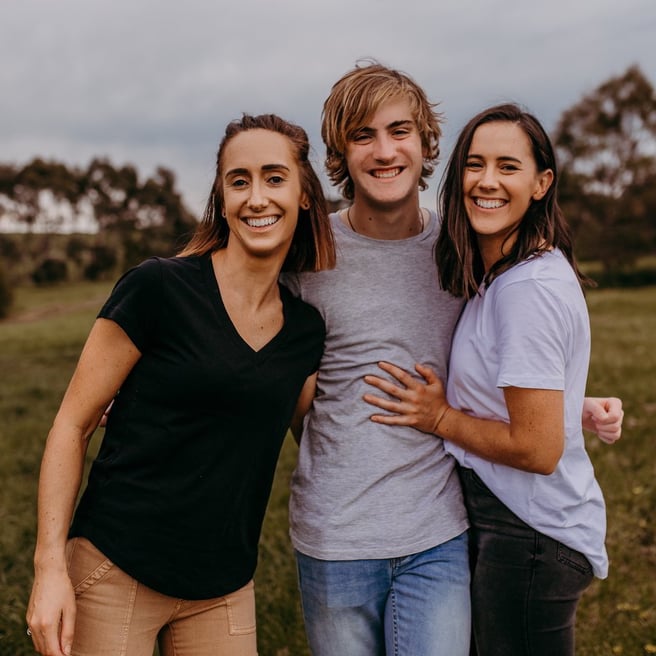 Paying for another round of uni when I’m looking at retirement could be an issue, but a few more years of working is a small price to pay. Honestly, there’s no downside.

My miracle baby is turning into exactly the man I hoped him to be. Every wish and dream I had when I saw that neon line, that tiny blip, that little hand, is playing out in front of me.

Every night as he goes upstairs to bed he yells, “Love you Mum, love you Dad."

Who could ask for anything more?

Can you relate to Anne's story? Share your thoughts in the comments below.

Reply
Upvote
I struggled with infertility issues due to pcos and finally at age 40 i was blessed with my beautiful boy. I am also married to a much younger man. I do worry that when he is 20 i will be 60 but im hoping he will keep me young and i just won't look like im 60.
J
jane.pedlar 22 days ago

Reply
Upvote
1 upvotes
Love this post, I am that child.... born to a 43 year old Mum and a 45 year old dad. My parents had my sister and brother 4 years apart in their early 20's, My sister had been born at 25 weeks and my brother at 32 weeks. Mum then had 3 miscarriages late in the pregnancies and was told to stop.  Low and behold at 42 with no plans of having another baby and thinking she was entering menopause Mum found out she was pregnant with me. She says it was her easiest pregnancy and I was full term. My parents were better parents in the 40's, more established, more relaxed, patient and understanding. My sister was 22 and my brother 18 when I came along. I have a niece and nephew older than me. People often mistook my mum for my grandmother when I was little but I had no issues putting them in their place and correcting them. I traveled with my parents and was often was of the grown up conversations. I know my parents worried about dying while I was still young and I did loose my beloved dad 6 years ago.... he was 90! My mum is 94 and still with us. My parents always said I was what kept them young and active. This now 52 year old daughter wouldn't change a thing!
News
General
Opinion
True Crime
Politics
Sport
Explainer
Entertainment
Celebrity
Reality TV
Movies
TV
Books
Rogue
Royal
Lifestyle
Beauty
Fashion
Weddings
Home
Wellness
Health
Fitness
Travel
Food
Parents
Before The Bump
Pregnancy
Baby
Kids
Teens
School
Parent Opinion
Work & Money
Money
Finance
Career
Lady Startup
Relationships
Sex
Dating
Separation
Friendship
Family
Real Life
Couples