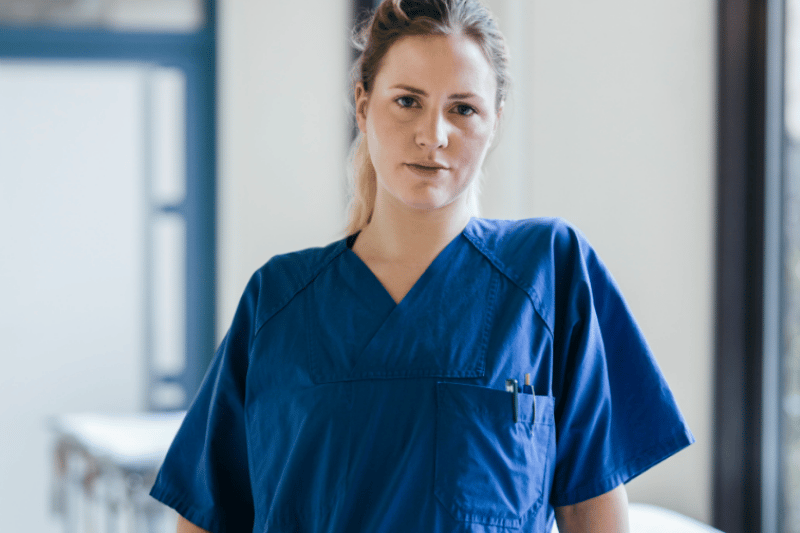 Today is the day that I've decided to leave nursing. I'm a year and four months into what I thought was going to be a lifetime career.

It's not from the strange hours or the complicated tasks I do. It's not from the very unwell patients I look after or being expected to go above and beyond. I love what I do, I enjoy talking with my patients, being a part of their healthcare experiences and ensuring that they leave the hospital better.

It's because of unruly patients who have no regard for clinical staff and the expectation that we nurses will fix every possible problem, even when the problem can be easily fixed by the patient.

Yesterday, I was given a patient who had failed discharge after he had an argument with his mum. During my shift with him, he told me on multiple occasions he wanted to kiss me, he wanted to know my marital status, tried to grab me and later physically assaulted me.

Throughout this whole process, I told him on several occasions these things aren't tolerated. The 18-year-old didn't listen; I reported him twice. For my own safety, I refused to care for him. This was not the first time I had been assaulted by this patient on one of his admissions.

Who signs up to have this happen to them?

So, after this incident, I'm handing in my registration. I've wanted to be a nurse since I was 6, and some 25 years later along with $50k worth of student debt and a very specialised skill set, I withdraw my nurse's registration. My childhood dream is destroyed for my own safety and sanity.

I know nursing isn't the only profession that sees this; there are several cases of other healthcare professionals who have been assaulted or harassed while doing their jobs. Most recently, a man had reported having threatened two ambulance drivers that he was going to kill them. The ambulance drivers left the scene without the patient.

Would you want to be deliberately disrespected day-in and day-out, alongside being expected to deal with problems beyond your control?

Sometimes, people need to realise that the only cure that can help with their concerns lays with them.

If the answer is yes, put yourself in your healthcare professional's shoes and think through the question again.

Feature image: Getty. The image used is a stock photo. The writer of this post is known to Mamamia and has chosen to remain anonymous for privacy reasons.

Are you a healthcare professional? We'd love to hear from you. Share your thoughts in the comments below.

Reply
Upvote
This is yet another american article. A Bachelor of Nursing in Australia costs around $7350 for most people (CSPs). I don't think the grad programs over there provide as much support as ours do. I've been nursing for 13 years, and I too was a little naive at the start. I have been assaulted, abused, threatened and scared by patients and clients over the year, and yes sometimes it hasn't been managed well by the hospital. Everyone who works with patients will experience these  types of behaviours. They're not acceptable but you are seeing people (and their families) at generally the worst times of their lives, or when they aren't capable of managing their behaviour due to an illness, drugs, alcohol or mental illness. Incidents need to be reported to management via riskman or similar but you also need to report them to your union (ANMF in Australia). Make use of clinical supervision or peer support or whatever your workplace has in place. If you get nowhere and no help, find a different job. That's one of the good things about nursing, there is always another job. And abuse and assault doesn't just happen in acute wards or ED or psych. My worst assault happened in a geriatric ward. It wasn't dealt with well by management, so I left. I have a job in nursing now that I love. There's a nursing role for all of us, you just need to find the one that fits you the best.
M
mamamia-user-313866646 2 years ago

Reply
Upvote
I am studying to be an Assistant in Nursing right now, as I care about helping others and hope that with my qualifications and studies into social care I can get into advocacy work, art and music therapy for people with disabilities. This is an area I am especially interested in. I personally have lived with the diagnosis of schizophrenia and have attended Sydney University in their Social Work degree, the degree takes a lot of time and with exhorberant rents in Sydney I was unable to live there, so could not finish. I am currently studying online in a related area and am enjoying it. I have worked as a Support Worker both here and in the UK, but I needed formal training. As someone who has a lived experience of disability and of working within this field myself, I feel I can provide a lot of insight by continuing my studies and becoming an advocate. I have worked with people with very challenging behaviour's, both violent and inappropriate. I think having a supportive team is so neccesarry to improving the service delivery to clients and a person centred approach neccesarry to work through challenging behaviour's, what we're their triggers, what activity can we distract a client with, how can we modify the clients behaviour, how can we ensure our safety on the job. I think one of the most challenging things about this role is the WHS, and accurate incident reporting and notes, also having the compassion and empathy for the limited capacity of clients and people whom are vulnerable and sick, also to take care of yourself. I know there are hotlines and support lines for nurses and allied health professionals to seek counselling. Eventually, when I have the qualifications, I would want to spend my time, in health promotion, either in Sexual Health, Drug and Alcohol Counselling, Diabetes Care, Post Natal Care, Disability Advocacy as either a Community Health Worker or A Health Promotions Officer. The scope is large, every facet is different. Good luck in your travels. I sincerely hope you find your stride and am able to adapt, which is ideally what we all can do when faced with challenges. Thank you for sharing.
Resources
Very Peri
News
General
Opinion
True Crime
Politics
Sport
Explainer
Entertainment
Celebrity
Reality TV
Movies
TV
Books
Rogue
Royal
Lifestyle
Beauty
Fashion
Weddings
Home
Wellness
Health
Fitness
Travel
Food
Family
Before The Bump
Pregnancy
Baby
Kids
Teens
School
Parent Opinion
Work & Money
Money
Finance
Career
Lady Startup