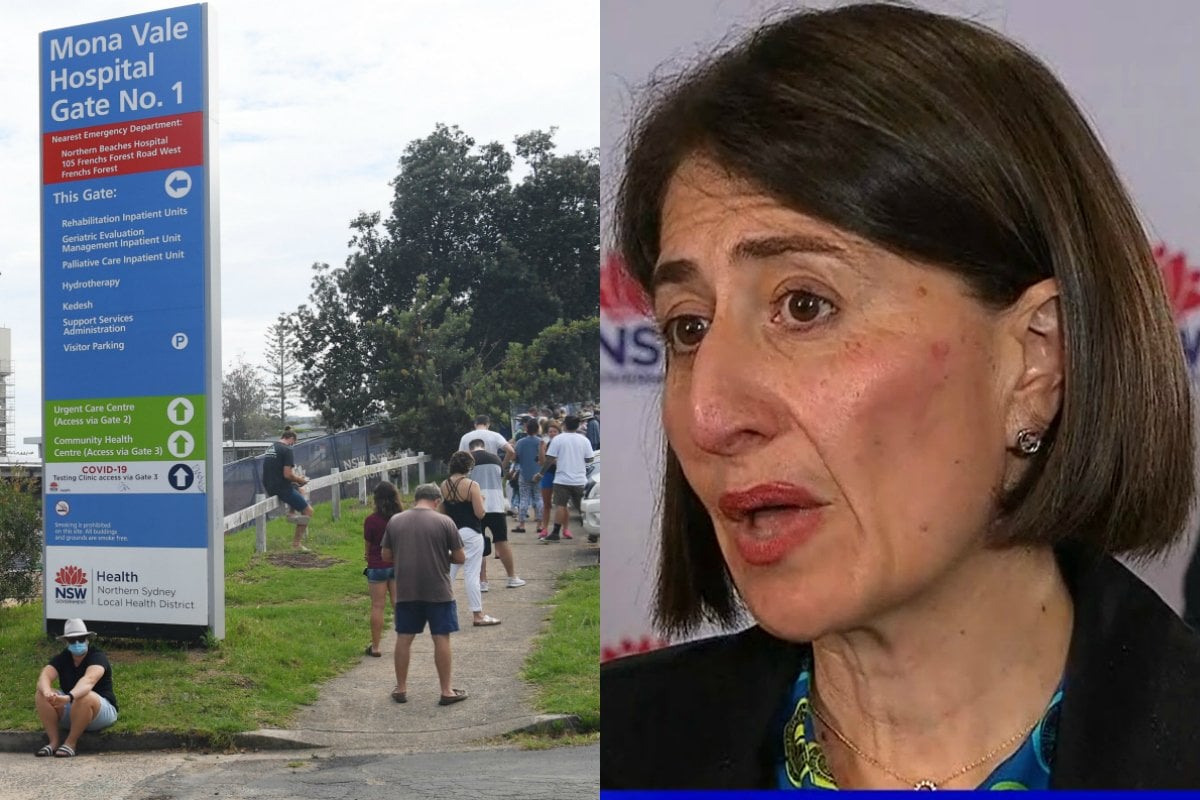 All people on Sydney's Northern Beaches - a population of around 250,000 people - have been urged to self-isolate after a COVID-19 cluster in the area increased to 28 cases on Friday.

NSW Premier Gladys Berejiklian announced an additional 10 COVID-19 cases on Friday morning. She said one other person who contracted the virus in Sydney travelled to Queensland but had since returned to NSW, bringing the total number of those affected to 28.

Fifteen new cases were identified on Thursday, with health authorities urging locals from the Spit Bridge to Palm Beach to lockdown by staying at home as much as possible over the next three days.

Her government is imploring Sydneysiders to wear masks, especially on public transport and in indoor areas where social distancing is difficult.

Here is everything we know so far.

Health authorities detailed three new cases on Thursday morning - a woman in her 50s who works at Pittwater Palms aged care facility at Avalon Beach, her partner and a Frenchs Forest man in his 60s who plays the drums for a local band.

Dr Chant said her department's hypothesis was that an unknown person infected the drummer, a woman in her 60s and man in his 70s at Avalon RSL last Friday where the band was performing. 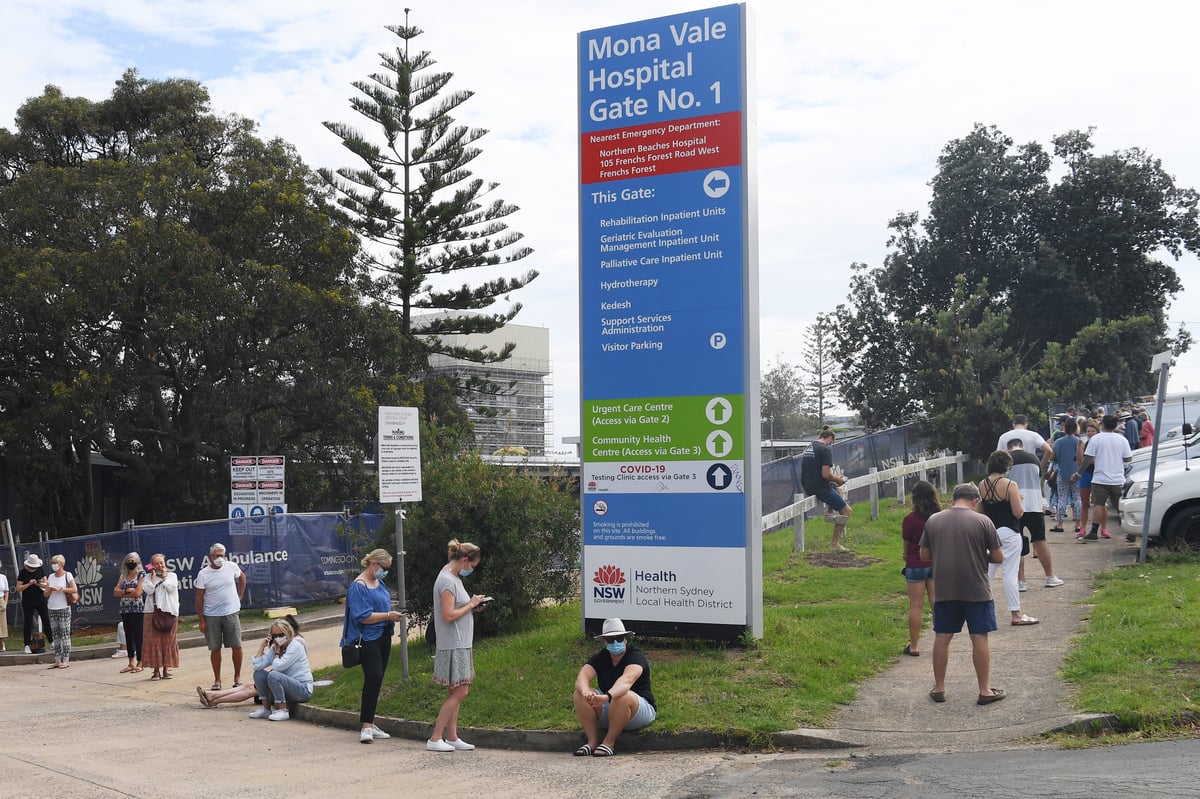 Eight have been infected at Avalon RSL and 16 at Avalon Bowlo, Dr Chant said.

Berejiklian flagged Northern Beaches nursing homes will be locked down until the outbreak is contained, just a week after restrictions eased allowing unlimited visitors.

The Pittwater Palms aged care facility is closed to visitors while residents and staff who had been in contact with an infected worker are being tested and are self-isolating.

Genomic testing has indicated the strain has arrived from overseas, Berejiklian said on Friday morning.

Dr Chant said it was likely from US origins, and they are investigating links to returned travellers and other possible sources.

On Wednesday, a 45-year-old man who works as a van driver shuttling airline crew between Sydney Airport and their accommodation also tested positive. This case is believed to be separate from the cluster and so far, the man has not infected anyone else.

One case recently visited a venue in Cronulla.

Cronulla RSL on Friday morning said a recent patron had tested positive to COVID-19, forcing the pub to close for thorough cleaning.

Health alerts you need to know about.

NSW Health released a list of locations across the Northern Beaches area and urged anyone who had visited them to immediately get tested and isolate until they return a negative result.

Additional locations where people must monitor for symptoms are include cafes, supermarkets and shops right across the Northern Beaches, as well as Gannons Park in Peakhurst in the city's south.

Anyone who travelled on these public transport routes during these times should get tested immediately and self-isolate until they receive a negative result:

Hundreds of people started queuing at Mona Vale Hospital early on Thursday and Friday to get tested for the virus and multiple pop-up testing centres are now in place, including at Avalon, Newport and Frenchs Forest.

For full details on where to get tested, visit the NSW Health website.

The premier has warned all of Greater Sydney to be on "high alert".

Berejiklian said she could not rule out needing to implement tougher restrictions, though this would be determined by how the next three days panned out.

She did say from Tuesday that aircrews will no longer be allowed to maintain their own self-isolation and will be required to go to one of two designated, police-operated hotels in Sydney.

The week before Christmas is typically the busiest travel period of the year - and unfortunately the cluster has meant new regulations for those arriving from NSW in other states and territories.

#BREAKING: There is a mad dash at Sydney airport this morning as travellers race to leave the harbour city. #9News pic.twitter.com/ZV9vWz6XBn

Other states and territories reacted quickly to the emerging cluster, and Sydney airport is chaotic on Friday as many travellers urgently brought forward their travel plans.

These the current rules for each state and territory:

All NSW arrivals into Western Australia are required to self-quarantine for 14 days and have a COVID-19 test on day 11.

People already in WA who had been in NSW at any time from December 11 have to self-quarantine, receive a COVID-19 test as soon as possible and isolate until returning a negative result.

They will also need to take another test on the 11th day since their arrival in WA.

Premier Mark McGowan has not ruled out the return of a hard border and said he was monitoring the situation in NSW closely.

Queensland has issued new restrictions for travellers from Sydney's Northern Beaches, including mandatory hotel quarantine from Saturday at the travellers expense.

Anyone who has visited the Northern Beaches since December 11 and is already in Queensland must get tested and quarantine in their home or accommodation for 14 days from the date they left the hotspot.

Anyone who arrives in Queensland after 1am on Saturday - including Queenslanders - will be required to enter hotel quarantine at their own expense for 14 days after the date they left the Northern Beaches.

"We will continue to closely monitor the situation and will provide an update [Friday] morning," Queensland Chief Health Officer Dr Jeannette Young said on Thursday.

Premier Annastacia Palaszczuk announced on Twitter anyone who has been in the Northern Beaches region since December 11 will not be able to visit Queensland residential aged care centres, hospitals or correctional facilities.

To protect vulnerable Queenslanders, anyone who has been in the Northern Beaches region in NSW since 11 December 2020 will not be able to visit Queensland residential aged care centres, hospitals or correctional facilities.

Tasmania has banned any travellers who have been in Sydney's Northern Beaches from entering the state unless approved as an Essential Traveller.

Anyone already in Tasmania who has been in the area has been asked to self-isolate immediately and book a COVID-19 test.

"If you have completed a Tas e-Travel registration and identified you will have been in NSW since Friday 11 December 2020, your pass will be cancelled and you will need to reapply via the website," the Tasmanian government said in a statement.

The Northern Territory has declared Sydney's Northern Beaches a coronavirus hotspot and requires any travellers from the area to isolate immediately.

Anyone already in the NT who has been in the Northern Beaches area on or since December 11 must arrange a COVID test and self-isolate while awaiting the results.

Anyone travelling to the Northern Territory from Northern Beaches council area will now need to undertake 14 days of mandatory quarantine in either Alice Springs or Darwin, the Department of Chief Minister and Cabinet said in a statement overnight.

The NT CHO has declared the Northern Beaches LGA in Sydney a hotspot. Anyone arriving in the NT from there from midnight will need to enter 2weeks mandatory quarantine. Anyone who has arrived on or after 11 December must self isolate & arrange COVID test. @9NewsAUS pic.twitter.com/A8k9GI5yWF

It has asked travellers from the hotspots to rethink their plans.

Victoria will introduce a permit system for all people travelling from NSW into Victoria.

From midnight on Friday, anyone who has been in a hotspot will not be allowed into Victoria.

The state will operate under a "traffic light" system. Hotspots - including the Northern Beaches - are considered a "red zone" and those from these areas will not be permitted to enter.

If they do arrive, they will be forced into hotel quarantine.

Greater Sydney is being classified as an "orange zone", and residents are being encouraged to get tested regardless of symptoms and to self-isolate until they receive a result.

The rest of NSW has been classified as a "green zone".

Victorians are being advised against travelling to Sydney as "conditions are expected to deteriorate".

This is the print out passengers arriving from Sydney into Melbourne Airport are being given. 47 flights from Sydney arriving today. @9NewsMelb pic.twitter.com/EsBTXvbJz1

Currently, SA Health recommends people who have recently returned from NSW to monitor updates closely and self isolate if they have visited health alert locations specified by NSW Health.

Canberrans are being advised not to travel to the Northern Beaches.

ACT residents who have been in the area since December 11 are being ordered to self quarantine and take a COVID test.

NSW Premier Gladys Berejiklian said she understood how tough this was for everyone, especially so close to Christmas.

"If we see that we are on top of it, there is no reason why people can't look forward to a Christmas they were hoping to have. But the next 24, 48 hours are absolutely critical. That is why we are working night and day to get on top of it.

"But we need the public's help. The public has been fantastic up to this point. We just need your help. If you live on the Northern Beaches, please follow the health advice. If you live in Greater Sydney, please take extra precautions.

"If all of us pull together and do the right thing, we have a greater chance of having a good Christmas and all of us, I think, deserve to be with our loved ones and have a break. But that will rely on how we pull together over the next few days."