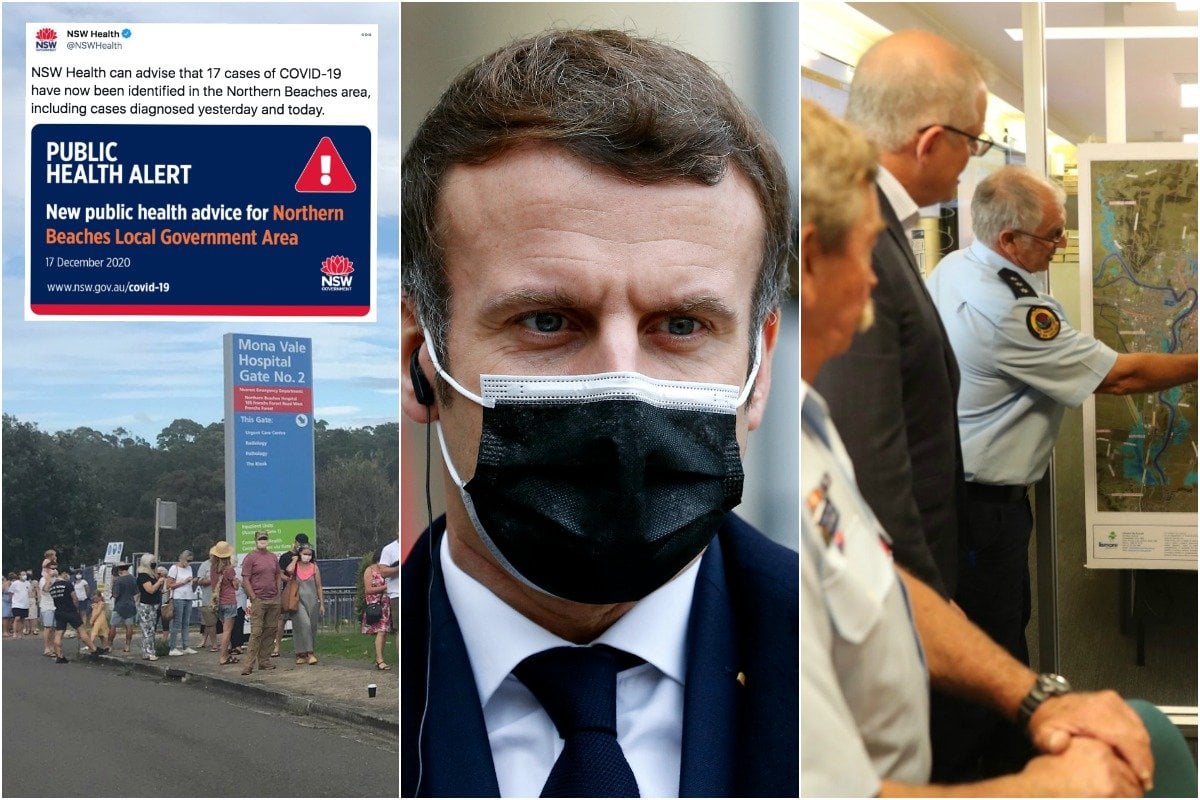 Queensland, Northern Territory and Western Australia have toughened interstate travel restrictions in response to the latest NSW coronavirus cluster, and other states may follow.

Since 8pm last night, NSW Health has recorded a total of ten new locally acquired cases who will be included in tomorrow’s numbers. Of these new cases:

The Queensland government has banned anyone who has been in the NSW Northern Beaches region since December 11 from visiting aged care homes, hospitals or prisons in Queensland.

The West Australian government says anyone arriving from NSW is required to self-quarantine for 14 days and get tested on day 11.

"I understand these changes will cause some frustration and uncertainty for some people," he said.

Tasmania has already moved to prevent people who visited high-risk locations in NSW from travelling there.

Northern Territory authorities said anyone from the northern beaches area travelling to the NT will need to undertake 14 days of mandatory, supervised quarantine in either Alice Springs or Darwin.

The NT CHO has declared the Northern Beaches LGA in Sydney a hotspot. Anyone arriving in the NT from there from midnight will need to enter 2weeks mandatory quarantine. Anyone who has arrived on or after 11 December must self isolate & arrange COVID test. @9NewsAUS pic.twitter.com/A8k9GI5yWF

Victoria similarly told entrants to the state from the hotspot that they must get tested and quarantine in their home or accommodation for 14 days from the date they left the northern beaches.

Meanwhile people in NSW are being urged not to travel to the Northern Beaches region if they don't have to.

Residents have been told to keep to their household groups, and work from home if they can.

They have also been told to avoid unnecessary travel outside the region, and not to visit high-risk venues including clubs, restaurants, places of worship and gyms.

The Elysee statement on Thursday said the president took a test "as soon as the first symptoms appeared," but did not elaborate on what they were.

"He will continue to work and take care of his activities at a distance," the statement added.

France has recorded more than 2.4 million cases of coronavirus with more than 59,000 deaths.

The French public could start receiving Pfizer/BioNTech vaccine by the end of December if the European Union approves it next week, French Prime Minister Jean Castex said on Wednesday.

Pence to get vaccine amid US roll-out.

US Vice President Mike Pence will receive the coronavirus vaccine in public as the outgoing US administration and president-elect Joe Biden's team try to build support for a mass inoculation to stem the spread of the pandemic.

Pence, who has headed the White House coronavirus task force, is poised to become the highest-profile recipient on Friday of a vaccine rolled out in the United States this week with hopes of curbing a virus that has killed more than 307,000 people in the country.

Biden, set to take office on January 20, will publicly get the vaccine next week, according to transition officials. At age 78, Biden is in the high-risk group for COVID-19, which has proven particularly dangerous among the elderly.

Pence's wife, Karen, and Surgeon General Jerome Adams also will get the vaccine on Friday.

President Donald Trump will get the vaccine when his medical team decides it is best, according to the White House.

Storms and floods continue in NSW and QLD.

NSW and Queensland have been lashed by another day of thunderstorms and flooding, with hailstones now thrown into the mix.

Sydney, Newcastle and Wollongong were bracing for heavy rain and possibly large hailstones on Thursday night.

The Bureau of Meteorology's warning took in much of the Hunter, Mid North Coast, Illawarra and South Coast as well.

The State Emergency Service asked people to move their cars under cover and avoid floodwaters.

Receiving the latest update from the @NSWSES HQ in Goonellabah on the flood situation in the Northern Rivers. pic.twitter.com/dlsZunMUCx

The Northern Rivers town of Lismore was facing heavy rainfall and flash flooding on Thursday evening after being deluged already earlier in the week.

The Wilsons River at Lismore still had a minor flood warning on Thursday evening.

Over the border in Queensland, damaging winds and heavy rainfall looked likely to hit the Central Highlands. The North Tropical Coast was also bracing for heavy rainfall and possible flash flooding.

School leavers of 2020 are set to find out their university admissions scores after an unusual final year of schooling.

"Despite a challenging year you have reached the end of your school education and a world of opportunity is ahead of you," he said.

"Know that your Year 12 marks will not define the rest of your life and that there are many different paths to reach your goals in life."

These Canberra students rose to the COVID-19 challenge to achieve an ATAR of 99, via @SarahLansdown https://t.co/CPfjwS1OPo

Australian Tertiary Admission Rank (ATAR) results are released on Friday, with students able to log on to learn their scores from 9am.

The ATAR is the key number determining university admission.

Russia will not be able to use its name, flag and anthem at the next two Olympics nor at any world championships for the next two years after a ruling by the Court of Arbitration for Sport.

The Lausanne-based court halved the four-year ban proposed last year by the World Anti-Doping Agency (WADA) in a landmark case that accused Russia of state-ordered tampering of a testing laboratory database in Moscow.

A court has barred Russia from participating in world championships, including the Olympics, for two years. The court rejected a four-year ban, hoping to "encourage the next generation of Russian athletes to participate in clean international sport." https://t.co/w39TZOKBQz

Russian athletes and teams will still be allowed to compete at next year's Tokyo Olympics and the 2022 Winter Games in Beijing, as well as world championships including the 2022 World Cup in Qatar, if they are not implicated in doping or covering up positive tests.

- Fiji has declared a state of natural disaster as Cyclone Yasa prepares to make landfall bringing winds of up to 250km/h.

- A group of 38 US states has filed an anti-trust lawsuit against Google, alleging that the search giant has an illegal monopoly over the online search market.

- Four months after he complained about what it was doing to his hair, Donald Trump has managed to relax a federal restriction on waterflow from showerheads.