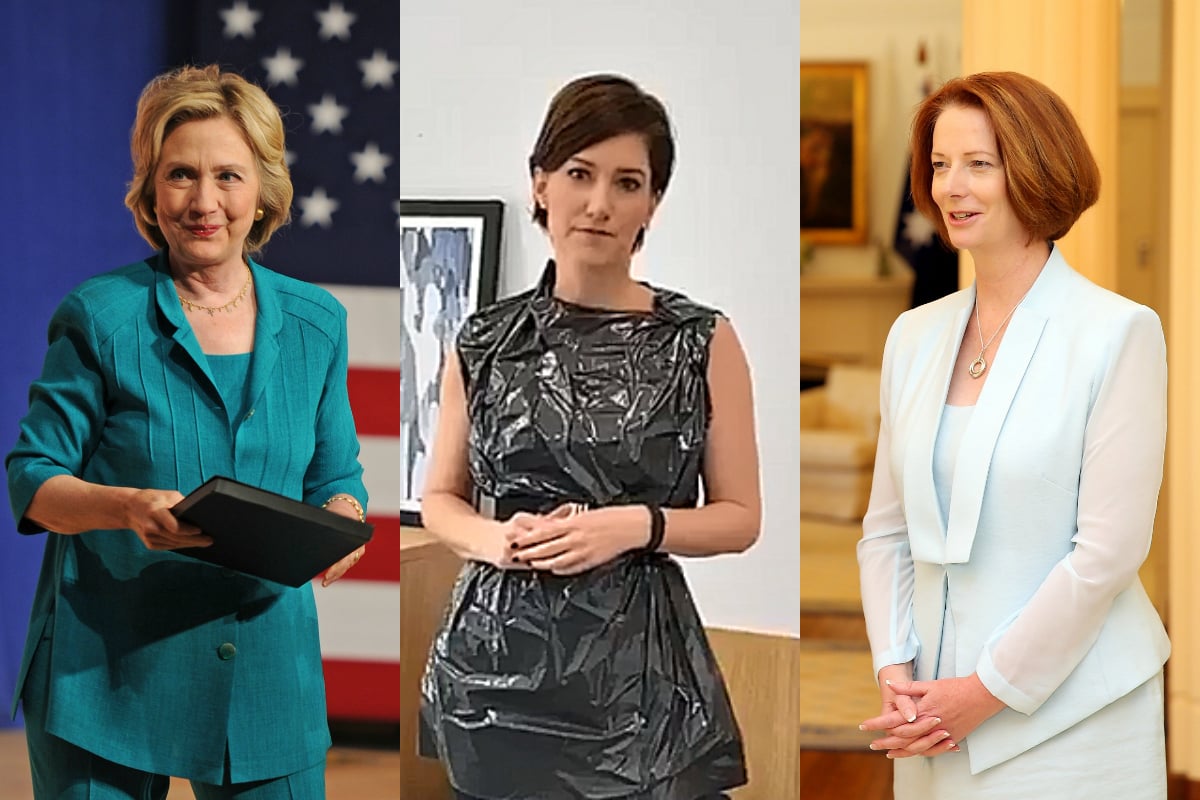 In a column in The Adelaide Advertiser over the weekend, journalist Peter Goers called for MPs to stop promoting themselves via taxpayer-funded electoral newsletters.

He chided South Australian state MP David Basham and federal member for Boothby, Nicolle Flint, for splashing the pages of theirs with hollow photo opportunities rather than discussion of important issues. (Hear, hear!)

But for reasons that remain unclear, Goers also reserved an entire paragraph for a dissection of Nicolle Flint's appearance.

Watch: "I missed the moment to take issue with it": What Julia Gillard would have done differently. Post conitnues after video.

"Nicolle wears pearl earrings and a pearly smile," he wrote. "She favours a vast wardrobe of blazers, coats and tight, black, ankle-freezing trousers and stiletto heels. She’s [sic] presents herself in her own newsletter, 23 times as a fashion plate. She has blazers and coats in black, blue, pink, red, beige, green, white, cream, floral and two in grey."

Basham, meanwhile, was described simply as "King of the open-necked shirt".

Flint was none too pleased.

In a video posted to Twitter on Monday, the Liberal MP railed against the article and asked Goers, "What should a woman in politics wear? How about a garbage bag to match your rubbish views?"

Watch below for the reveal of her now-iconic bin-liner dress.

I am, which is why I’m calling out @abcadelaide’s Peter Goers rubbish views about my appearance, published in yesterday's @theTiser Sunday Mail.

It’s time women in public life are judged on what they stand for, not what they look like. #GarbagelikeGoers pic.twitter.com/tk9DRyM0nN

Mail’s in - the lastest sample of some of the sexist bullshit I regularly receive as a female MP. #springst pic.twitter.com/aY3SFe6FgE

Like most women in positions of power in this country, Flint and Britnell have been forced to pay the wardrobe tax.

The wardrobe tax is an antiquated levy leveraged against women to ensure they meet society's expectations of the feminine ideal. It's paid in time and energy, with the amount typically indexed to the woman's relative position of influence.

Former US presidential candidate Hillary Clinton, for example, calculated that she spent 600 hours of her 2016 campaign on hair and makeup. That's equivalent to 25 days devoted solely to her appearance.

"I'm not jealous of my male colleagues often, but I am when it comes to how they can just shower, shave, put on a suit and be ready to go," Clinton wrote in her memoir, What Happened. "The few times I've gone out in public without makeup, it's made the news."

During her time in office, discussion about the Labor leader was just as likely to devolve into analysis of her haircut or the fit of her blazer as it was the content of her speech or her government's policy direction.

Just days after she was sworn into her position in June 2010, there were media reports, radio commentary and even newspaper polls about a trench coat she wore during a shopping centre walk-through.

"We've referred to it ever since as the jacket that divided a nation," Gillard told Mamamia's No Filter podcast this week, laughing. 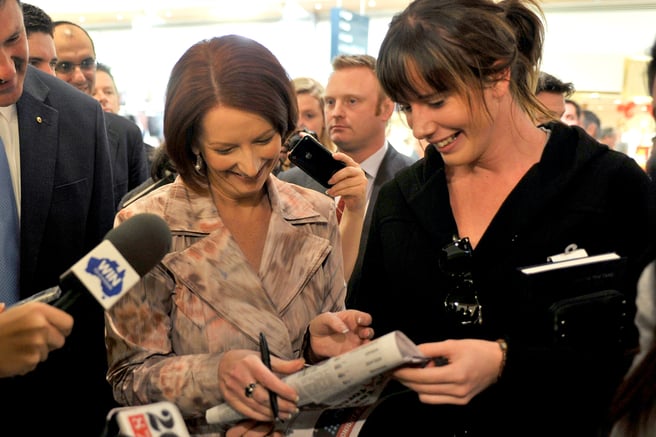 "Maybe it wasn't the smartest choice in the world, but I suspect that whatever I had worn that day would have been the subject of commentary.

Even former Foreign Minister Julie Bishop—a lover of all things fashion, style and design—had to cough up her dues: a more "appropriate" wardrobe.

“When I was first appointed to the ministry [in 2003], I was asked to be the Minister for Ageing," the former Liberal MP previously told Mamamia.

"One of the Prime Minister’s senior advisors rang me and said, 'Julie, take this the right way, but forget the Armani suits and forget the corporate look. You’re the Minister for Ageing, you’re going into aged-care homes; you’ve got to dress appropriately.'

"I said, 'What? You mean like cardigans?' He goes, 'Yeah, more prints, more colour… just not corporate.' 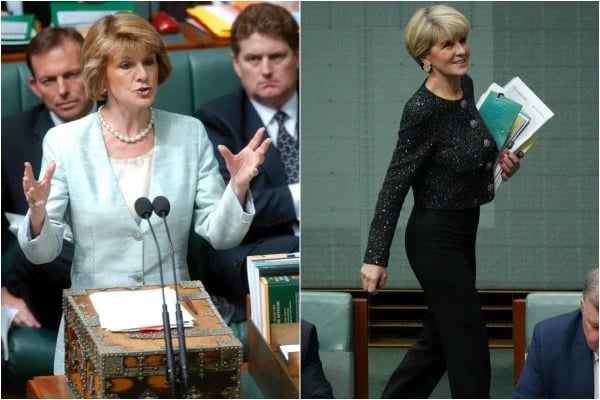 "So you’ll see me, as Minister for Ageing, looking like they expected me to look.

"And then I thought, 'This is ridiculous. Don’t let other people define who you are, what you wear. Be authentic.' And so I just decided one day, 'I’ve had enough of that. I’m going to dress the way I want to dress.'"

Bishop was taxed for that decision in outraged tweets and column inches that, once again, not only distracted from her actual work but included delightful phrases like "egotistical show pony" and "narcissistic bimbo".

Meanwhile, there's scarcely a mention of the sartorial choices of men in power. Maybe a tongue-in-cheek jibe about Australian parliament being stacked with 'men in blue ties', or about British Prime Minister Boris Johnson's tousled hair.

But it costs them nothing. There is no political price to pay, or explanation owed, no hours spent agonising over how people will interpret them as a result.

Former US First Lady Michelle Obama told the crowd at a 2017 Apple’s Worldwide Developers Conference that her husband wore the same tuxedo throughout his two-term presidency without so much as a headline.

"That’s the unfair thing," she said. "No matter what we do, he puts on the same tux. Now, people take pictures of the shoes I wear, the bracelets, the necklace—they didn’t comment on that for eight years, he wore the same tux, same shoes."

Speaking to Mamamia, Julia Gillard said our culture remains stuck in a zone in which judgements about a woman's appearance too easily become judgements about her character. Yet the same isn't true for men.

"I think the problem for a female version of Boris Johnson, [is that] it wouldn't be limited to people saying, 'Doesn't she own a comb? Hasn't she ever heard of a blow dryer?' It would be the additional problem that people would say, 'A woman who allows herself to appear that unkempt is a woman without self-regard, work ethic, discipline.' And yet for Boris, it's viewed as amusing eccentricity, a bit correlated with being British posh," she said.

"It plays out differently."

To hear more from Julia Gillard's chat with Mia Freedman, listen below or via your favourite podcast app.