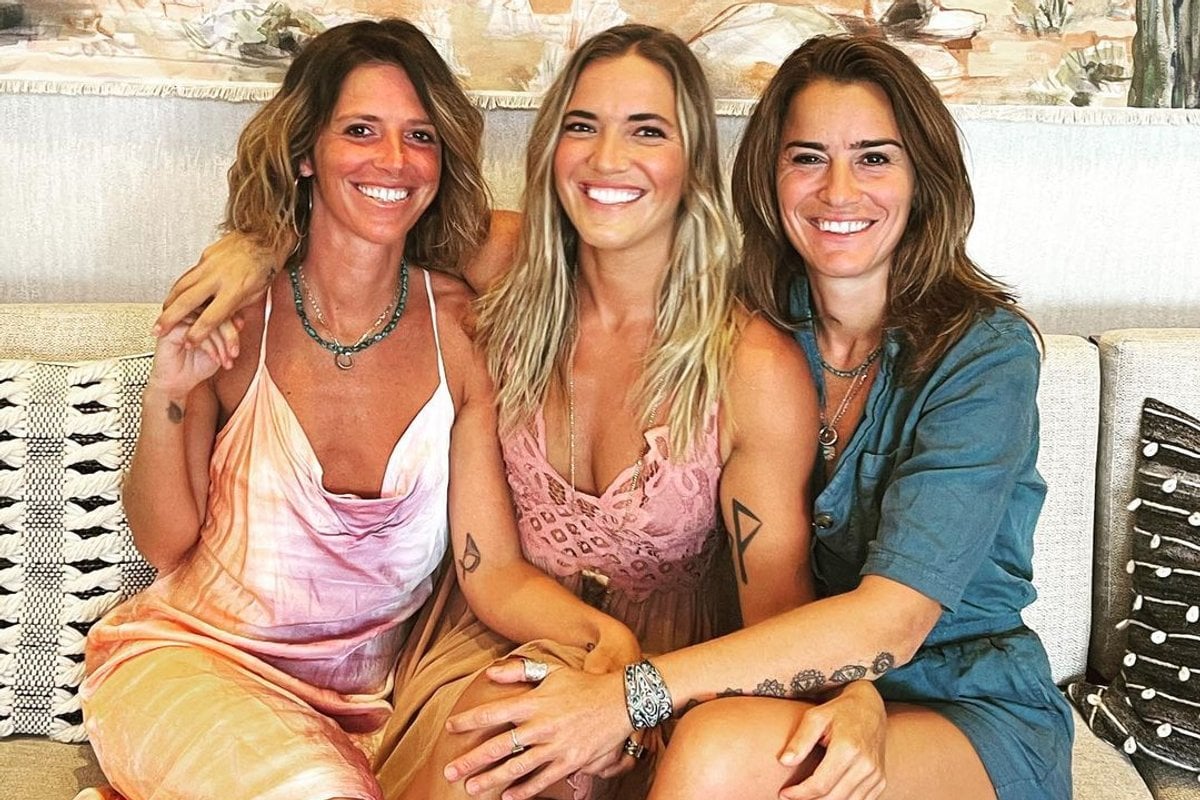 "I am in a relationship with two people - and in business with them too."

This is the new reality for Dr. Nicole LePera, her long-term wife Lolly and the most recent addition to their relationship, Jenna Weakland.

The married couple and their podcast co-host are now officially a 'throuple'. But it was a love story all three never expected.

You may have heard of the name Dr. Nicole LePera because of her book How To Do The Work and Instagram account @the.holistic.psychologist, which has garnered a cult following. Here she teaches people to 'heal' and consciously create a new version of themselves, mainly through manifestation, meditation and 'looking inward'.

Nicole has been with her wife, Lolly, for a long while - and the two work in tandem on their virtual self-guided healing community, the SelfHealers Circle.

But then a woman slid into their DMs, changing the course of their relationship for good.

The message that started it all.

Jenna Weakland admits during an episode of the SelfHealers Soundboard (which she co-hosts with Nicole) that she first approached the couple by sliding into their DMs.

After realising this was true, Nicole, Lolly and Jenna struck up a professional relationship - working together to expand the SelfHealers Circle network and launch a podcast, blasting the brand's message.

The three became business partners, working towards a shared goal, until something started to feel off.

"There were red flags, we had conflicts arising, and it really felt like we were in a relationship, even though we weren't," Jenna explained.

"I zoomed out and looked at things from a macro-level and said, 'this is my passion and work and my business and these are the relationships in my life that I deeply love,' but what here feels off?"

"I've always been guided by my heart, and I've followed my heart to a fault. Me following this intuition brought me to a place where I was like, 'I'm pretty sure I love these women'."

And so, following her heart, Jenna decided she needed to 'share her truth' with Nicole, who remember, at this point is her boss and podcast co-host.

"I do want a relationship, I do want partnership. I want that family experience," she told herself while mustering up the courage to talk to one of the women she had fallen for.

She walked up to Nicole, before their morning meeting at work and said:

"Hi Nicole, I have feelings for you. I love you. And I love Lolly. I'm not attached to any outcome, but I do need to be responsible to being true and authentic to myself, and my heart, and my path. So, regardless of how either of you feel, I just need some clarity because I don't want to live in black, white and grey, I just want to get the show on the road - whichever path it may be on!"

Nicole is quick to point out that she definitely didn't see this coming. Sure, she was incredibly close with Jenna, as was her wife Lolly - but that was the thing she couldn't shake, she had a wife. How would this even work?

"Why the hell is this girl saying this to me - I'm in a partnership, I'm in a marriage! Jesus, I can't tell Lolly. What is she going to think?" panicked Nicole.

"But after that fear, I sat with it," the author explained. "One of the things I love so much about you Jenna is your connection to your heart, and when you spoke that to me, I had the utmost trust that this was your truth and I respected that and thought you were so brave for telling me that."

And that truth gave her permission to dig deep and figure out what it meant for her, for Lolly, and for their business. "For me it opened a doorway, and a new way to connect."

Then, the questions came rushing in.

"I had to ask: 'Is there truth in this for me?' And, furthermore, if there is then what the hell does that mean for my current relationship? Is this something we can integrate into all three of us being in a relationship?"

Nicole reminds her podcast listeners that, "This isn't something I had models for, or something I was familiar with. I had no friends who had done this, no support group."

If they were going to do this, they would all be going in blind.

Listen to this incredible episode of No Filter with Mia Freedman. Post continues after podcast.

After Jenna laid her feelings out onto the table, Nicole knew she needed to take a minute.

...and she needed to tell her wife.

"I had a discussion with Lolly, an honest conversation," says Nicole. "It was here where I shared that I was in agreement with Jenna's feelings. And that was scary."

But much to Nicole's delight, Lolly was on the same page. She too felt a closeness to Jenna and saw a future where the three of them existed as more than just business partners.

"Luckily we were all in alignment and were able to explore the possibility that there was something there," says Nicole. "So we, as a couple, decided that we were willing to try it."

"We had no models, we had no idea what we were walking into - for all of our relationships, including the personal and the professional. But we were open to seeing what this meant for us, individually and as a throuple."

Living, working and loving as a throuple.

"We had admitted that we had feelings for someone else, and that alone is something which is so outside of the box for a lot of couples," explains Nicole. But life 'outside of the box' had approximately zero rules, guidebooks or instructions - so the three had to get creative.

"I did a lot of Googling and YouTubing to try and see if there were other throuples out there!" shares Nicole.

And while very little information cropped up, as self-healers, the three tend to find more solace internally rather than externally. So, they've been using their hearts and guts to guide them through the process.

But the first hurdle (and the one they're asked the most about) is jealousy.

"I had to ask myself: What would it be like for me to see my partner, who I love and who I have only seen with me, with someone else?" Nicole admits. "We had to learn to adapt to a new human in our intimate world."

Don't assume that the biggest learning curve lies with Nicole and Lolly, welcoming Jenna into their marriage, because, as Jenna points out, "I fell in love with a married couple" - and that's no easy feat.

"This is new, this is unfamiliar. Everyone has a lot of questions. But this has been my greatest learning experience. I'm learning a lot about myself and about my partners."

But at their core, Jenna knows this is the real deal. "It's love. We're a family," she proudly shares.

"We are three incredible humans who are committed to eachother."

mystal84 a month ago

Reply
Upvote
Honesty is the best thing any relationship wether it is professional or personal a couple or a throuple so I think half the battle is won already. I wish the ladies success as they move forward what’s the worst that can happen we’ve all been through break ups but also on the flip side have thought “what if”. Would love an update on this story just out of curiosity