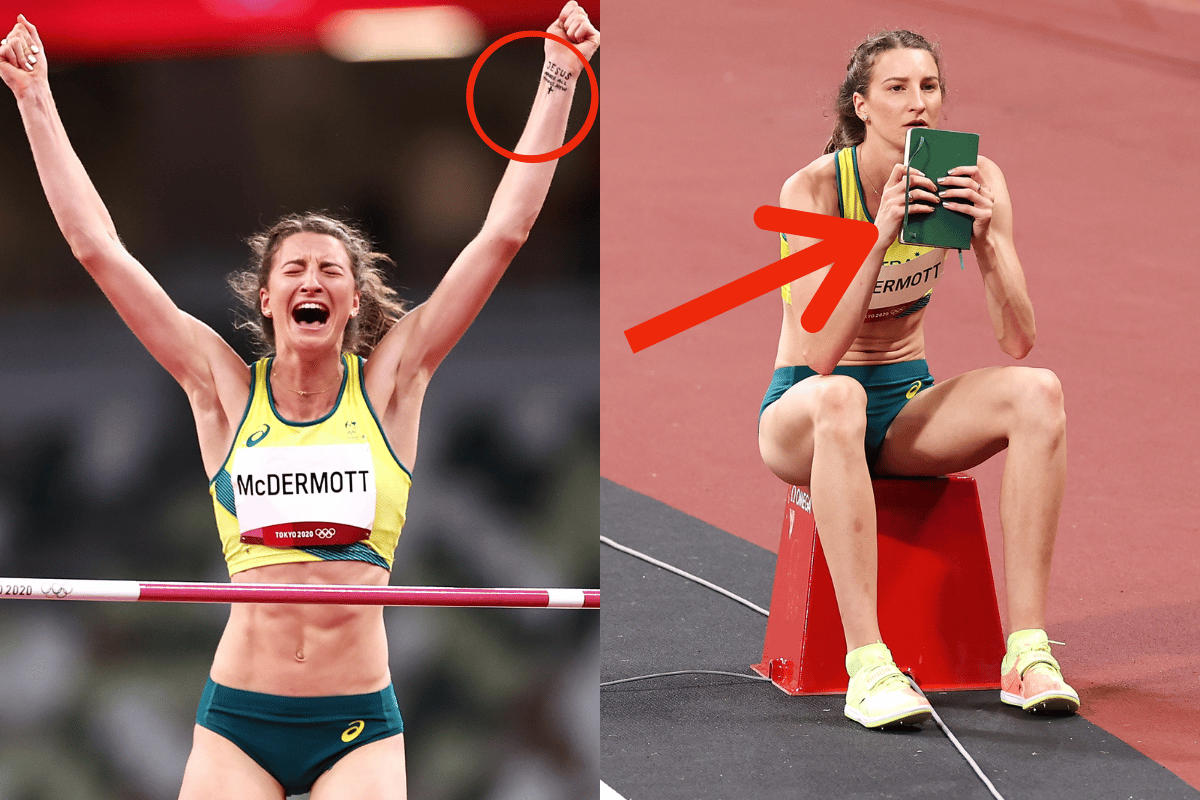 Aussies were at the edge of our seats as we watched high jumper Nicola McDermott at the Tokyo Olympics last night.

The 24-year-old went to new heights and set a national record of 2.02 metres in the women's final.

While she wasn't able to beat out Mariya Lasitskene of the Russian Olympic Committee team and clear 2.04m, she did earn herself a silver medal.

It's Australia's first medal in women's high jump since 1964. 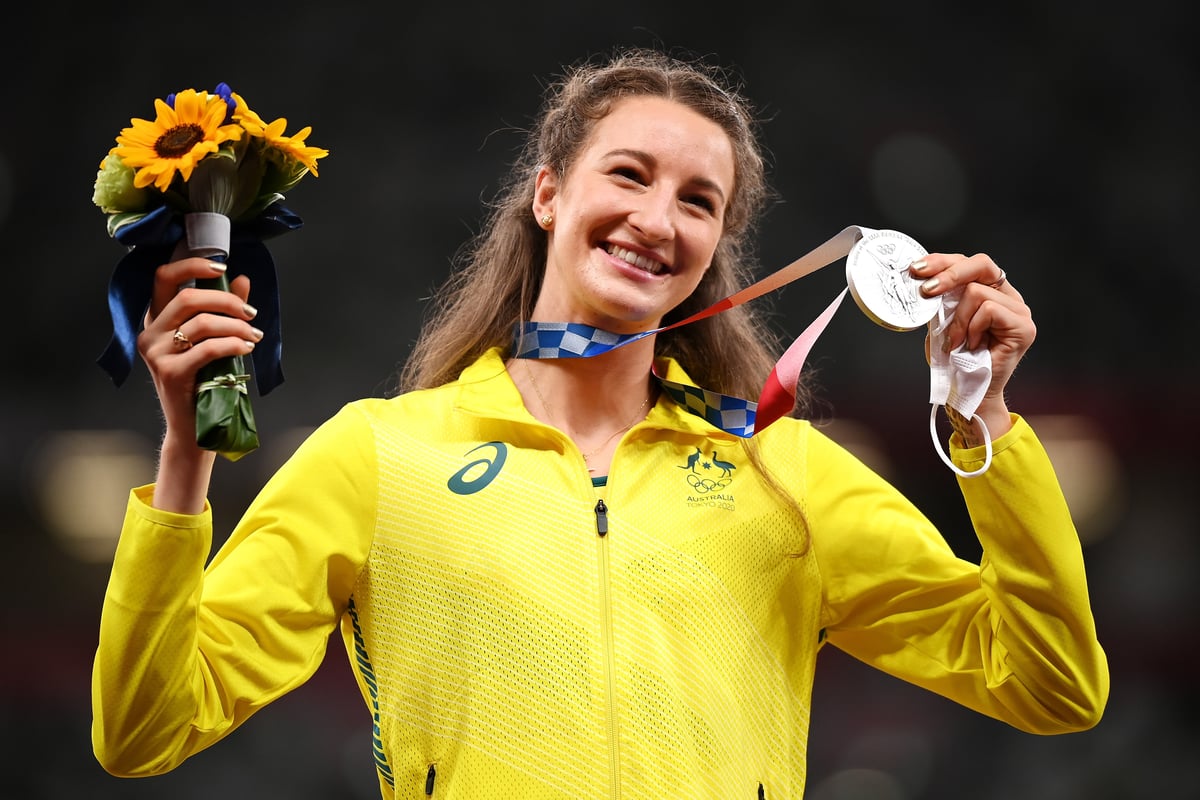 If you found yourself with questions while watching Nicola, you weren't alone.

From her notebook to the biblical reference on her arm, here's everything you need to know about Nicola McDermott.

1. Who is Nicola McDermott?

Alright, let's start with the basics.

Before she made history in Tokyo, Nicola McDermott grew up on the Central Coast of New South Wales.

The 24-year-old fell in love with high jump from a young age after trying her hand at a number of other sports.

"I did dancing – terrible, no coordination," she told The Guardian.

"Swimming – terrible, no upper body strength. Tennis – terrible, no coordination. But my parents just let me keep trying. We went to a Little Athletics carnival in year two without any expectation and I pretty much won all the events."

When she tried high jump, she immediately "fell in love".

"I remember that my first jump wasn’t even that great, but they told me it was an advantage to be tall and at the time I was absolutely huge. I thought: ‘'This is fantastic!'"

Since then, she's continued to make a name for herself in the sport.

In 2018, she won a bronze medal in the Commonwealth Games when she achieved a personal best jump of 1.91m.

And earlier this year she became the first Australian woman in history to clear the 2.00m bar at the 2021 Australian Track and Field Championships. It was a record she later smashed when she jumped 2.01m in Stockholm last month and again when she cleared 2.02 metres at this Olympics.

2. What does Nicola write in her notebook?

If you watched Nicola last night, you would have noticed that after every jump she sat down and journaled in a notebook.

While it might be unusual practice, there's a very good reason for it.

In a post-competition interview, McDermott explained that she used her notebook to rate herself out of 10 after every jump.

"I was giving myself a rating out of 10 for every single component of the jump. By the last time, that was my highest, I gave myself 10 out of 10 but I still had work to do," she said, according to news.com.au.

"Writing on a T-shirt is another process of my athletics processing. I was writing each time I jumped a bar, it allowed me to zone off and go, ‘What do I need to work on?’ rather than get carried away by the emotion because after I cleared the 2m it was tempting to back off.

"But I just kept going and going because I knew I had things to work on."

The tactic also puts some of her competitors on edge.

"It really freaks some of them out," her coach Matt Horsnell told The Guardian. "I can see them thinking, ‘what is she writing?’"

3. What does Nicola say to herself before she jumps?

Another ritual Nicola does during competition is clapping her hands and yelling "come on" to herself.

Not only does this get the crowd amped up, but it also helps her find her rhythm.

Even with no crowds in Tokyo, Nicola still stuck to her routine.

"I'll still be doing the clap in an empty stadium, so I'll be hearing the cheers at home," she told ABC before the Games.

"I love the full stadium, so to not have them there's a little bit of a bummer — it'll look different, but still be really special."

If you were watching closely, eagle-eyed viewers may have spotted a biblical reference on Nicola's wrist during the event.

As a devout Christian of a Pentecostal denomination, Nicola writes a reference on her wrist whenever she jumps. When she won silver on Saturday night, it read "Jesus makes all things new". 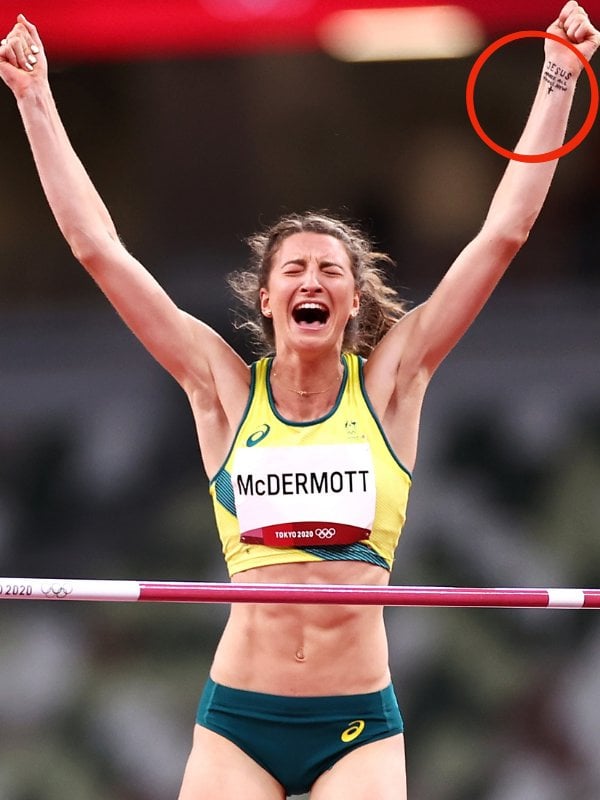 "As a teenager, I was always an outcast, and I got welcomed into a faith community that loved me. I remember encountering God’s love and it changed the way that I thought of myself as a misfit," she explained.

"It gave me passion and purpose, and I think in 2017, it was my big moment when it flicked a switch, and I decided to pursue God over sport and whatever comes with sport is a bonus. But I am already complete and perfect in love regardless of it."

That year, Nicola co-founded the ministry Everlasting Crowns along with her best friend to connect Christian athletes.

The group runs bible studies and connects athletes to local chaplains during competitions.

This definitely isn't the last we'll see of Nicola.

The 24-year-old said she's going for gold in the 2024 Paris Olympics. And we can't wait to watch her do it.

"I am going to keep putting in 100 per cent because this is just like a little bit of encouragement for one person watching that anything is possible when you have faith, then I have done my job today."