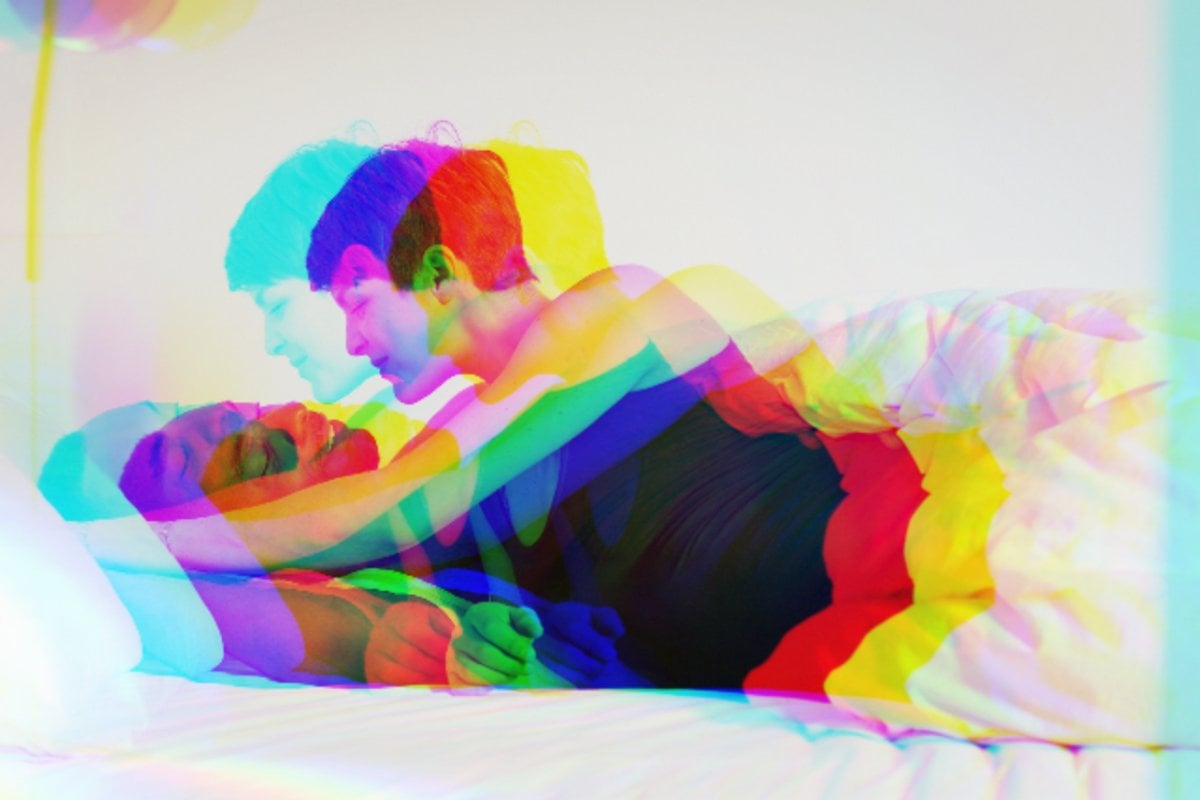 Hello, friend. Riddle us this: How much sex is everyone else having? Is it good? Is it long? Orgasm or no orgasm?

These are the kinds of factors we look at when it comes to how good our sex life is.

But here's the thing - the answers we think are right, are most probably wrong. And it can actually be really toxic for your relationship.

Watch: Here are some tips that can (actually) help you have better sex. Post continues below.

To cut out all the noise, we had a chat with accredited family & relationship counsellor Beth Walker, and asked her to debunk a few virulent myths that really aren't helping you feel great about your sex life.

1: Everyone else is having sex regularly.

Don't believe what your friend Sarah is saying - everyone isn't having as much sex as you might think they are. Plus, even if they are all doing it three times a day, there's no right or wrong frequency when it comes to the amount of sex someone is having.

"Sex drive and frequency is a big one. Couples question whether their sex drive is too high or low, whether they’re not having enough sex, or whether it’s normal to not want to have sex at all."

"People tend to question if their sex drive is too low or high if it doesn’t match their partners. But we don’t always line up to our partners' willingness for sex at the same time - this is totally normal. The key is to find a balance and negotiate times where both of you can take turns initiating."

Proof of how important it is to ~just do you~.

2: Sex fizzles in a relationship as time goes on.

You know those crazy early days of a relationship where you have this intense urge to just spontaneously rip each other's clothes off? Like, all the time? Yeah? Well, with the majority of couples, that kind of passion is difficult to sustain in a long-term relationship.

We're sorry, but it's true. And totally normal btw!

As you move from flirting with someone to creating a home and a whole life with them, that lust and spontaneous desire tends to fade a smidge. However, that definitely doesn't mean you're not attracted to each other anymore.

"Not wanting to have sex is not uncommon, but it usually indicates a disconnect with the self and your needs not being met for basic self-care (i.e., rest, exercise). It doesn’t necessarily mean your relationship is in trouble if you only have sex five times a year," said Walker.

If a simple kiss isn't enough to make you turned on anymore (this is the 'spontaneous desire' we were talking about), there is a way to create that spark - it's called responsive desire.

According to research, you can choose to start making love and trust that desire will arise. For example, instead of giving your partner a quick peck when you get home from work, what would happen if you gave them a prolonged pash? Lots of steamy stuff, we reckon.

Not in the mood? That's cool. Just remember, though - if you don't make it intentional, you can go ages without it.

"What you feed grows. If you make it a priority, it gets better, more explorative and fun. But you have to work at it and cultivate positive thoughts around it."

"Couples need to put in an effort - it’s a sure-fire way to stay close and grow together. Building a rich and fulfilling sex life with your partner is one of the best things you can do for yourself and your relationship."

Umm... don't even try pulling this one on us, you saucy minx, you! If you consider yourself to have a relatively low sexual interest, that doesn't mean you don't have the ability to become aroused quickly or enjoy sex.

"Everyone can be sexual, everyone can tap into sexual energy and have amazing, mind-blowing sex," said Walker.

"Don’t deprive yourself by telling yourself you’re just not that sexual."

4: If your partner doesn't orgasm, the sex isn't great.

This one goes out to all the vaginas who are a bit 'meh' about penetrative sex alone. It's not just you. And you're not broken, either!

A separate study proved that women are even less likely to orgasm during casual sex, with only about 40 per cent saying that they climaxed during their last hookup (compared to 80 per cent of men).

Now read that last line again - because this old nonsense needs to die.

If you're struggling to orgasm and it's something that's worrying you, Walker suggests taking a step back and having a conversation about it with your partner.

"The most loving thing to do is to take the pressure off both of you and not make it into an issue. Chances are your partner is worried what you think too. Open communication asking about what feels good for them and what they like will be helpful," suggests Walker.

"Insisting your partner orgasm is just going to feel like pressure and have the opposite effect. Sometimes it can highlight feelings of inadequacy and frustration that is causing the lack of orgasm in the first place."

LIES LIES LIES. This myth usually comes from the way of thinking that 'women are hard to please when it comes to sex' and therefore don't have the same sexual desires and 'drive' as men.

This, folks, is wrong.

The belief that we should all have a sex drive all day long is not a thing. Everyone has their own individual baseline of what 'normal' libido is, and it varies from one person to another (just take a look at this study).

According to Walker, it's also based on a variety of different factors, including how we feel mentally and physically.

"Your sex drive is affected by stress, lack of sleep, poor diet, drugs and alcohol, emotional upsets, your mood, how connected you feel to yourself - regardless of gender," said Walker.

6: You need to have sex more often to maintain a higher sex drive.

It's a no from us. Increased sexual activity is not really necessary in order to maintain a big ol' libido.

While it may be true that having sex can increase the desire for more sex, most people are able to become aroused and experience good sex whether or not they have had recent sexual activity. Makes zero difference.

Of course, if you're concerned about your sexual health, seek a medical professional for a consultation.

Do any of these sex myths sound familiar? Share your thoughts with us in the comment section below.