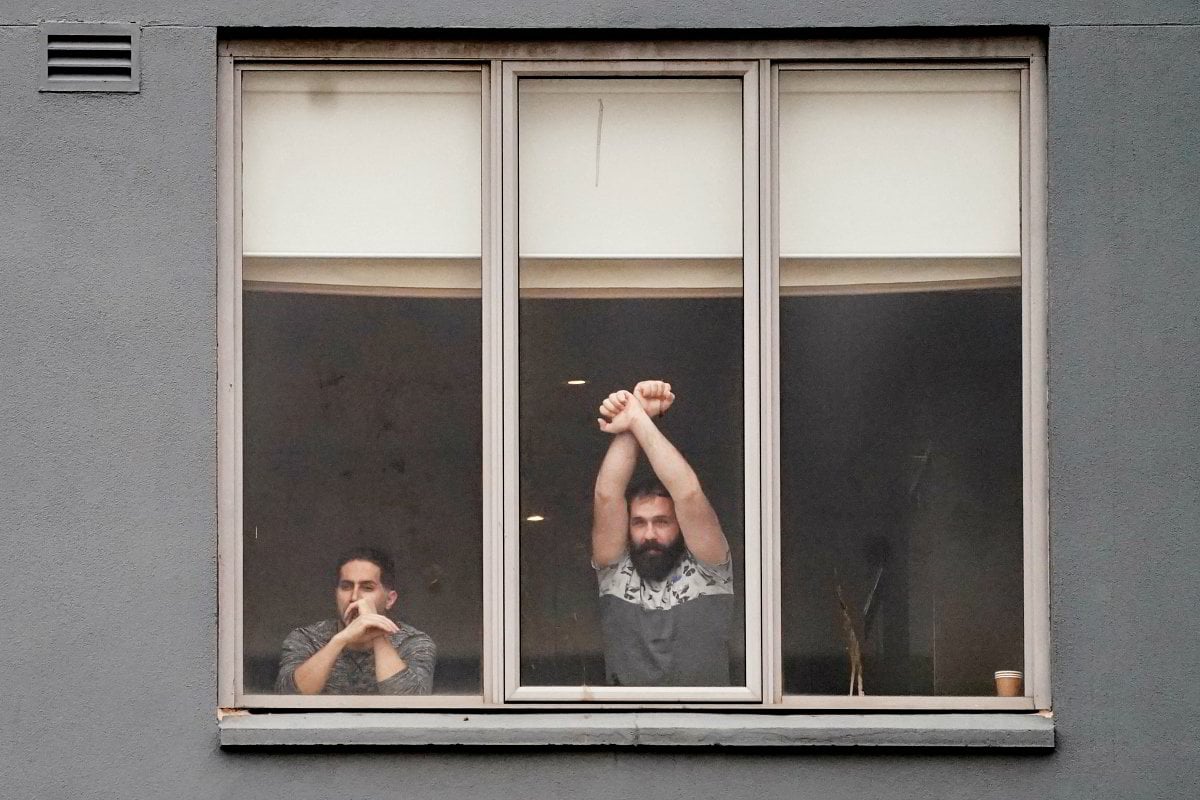 There are currently 1458 people being held in Australia's immigration detention facilities.

Many of these people are asylum seekers, people who have broken no law, yet find themselves indefinitely detained in prison-like conditions in the country they hoped would offer them safety and sanctuary.

The average time spent there? 553 days.

This week, these people could have their lifeline to the outside world — their mobile phones — stripped from them, as federal parliament debates a controversial change to the law.

The proposed amendments to the Migration Act would allow Home Affairs Minister Peter Dutton to prohibit people in immigration detention from possessing certain items, including sim cards, mobile phones and other internet-capable devices.

It would also grant detention staff new powers to search detainees without a warrant and would allow strip searches and detector dogs within the centres.

The government claims that some people in detention are using mobiles to organise criminal activities, coordinate escape efforts and to threaten other detainees and staff. It argues that granting staff extended powers is necessary to provide "a safe and secure environment" for them, detainees and any visitors.

A similar justification was given by the government in February 2017 when mobile phones were last prohibited. Albeit briefly.

After a successful challenge by the National Justice Project, the Federal Court ruled in 2018 that government officials could not mandatorily take property, including mobile phones, from people in immigration detention.

On top of that, the Australian Human Rights Commission determined the following year that the reintroduction of mobile phones had a significant positive impact.

Detention staff reported that only a small portion of detainees used their devices inappropriately, meanwhile both staff and detainees reported that increased contact with family members was beneficial to the mental health and wellbeing of those detained.

﻿Sadly, there are moves to take mobile phones away from innocent refugees in Aust detention, who’ve wasted away for more than 7yrs. Many are my friends. Their phone, like yours or mine, is their lifeline to support, legal counsel, the outside world. It’s not right #NoPhoneNoLife pic.twitter.com/xGwiEKboRe

That should not be underestimated.

People in immigration detention are 200 times more likely to self harm than those in the wider Australian community; a risk that drops dramatically when they are placed in community detention.

Yet because a small number of people are doing the wrong thing, the government is seeking the power to limit hundreds more from how and when they can contact loved ones, lawyers, case supervisors, mental health support services, media, or anyone else in the outside world.

This, at a time when outside visitors have been banned from detention facilities due to the COVID-19 pandemic.

And this, just weeks after the Commonwealth Ombudsman noted that "there appears to be an increasing tendency across the immigration detention network for force to be used to resolve conflict or non-compliant behaviour as the first rather than last choice."

With the Ombudsman now blocked from visiting centres (again, COVID-19) there is concern that this proposed bill would only make it more difficult for people in detention to report harm or mistreatment by staff.

In our immigration detention inspections, I've heard how phone calls with loved ones give detainees hope, and sometimes even a reason to live. We oppose this Bill because it would allow the Minister to ban mobile phones for anyone, or everyone, in detention facilities. More here: https://t.co/dRFXa2XBDu

"Immigration detention facilities are administrative and are not supposed to be punitive," said Elaine Pearson, Director of Human Rights Watch Australia. "Giving private security guards and immigration officials police-like powers to conduct searches on very broad and vague grounds without sufficient oversight or judicial review is a recipe for disaster."

The Law Council of Australia added, "It is of great concern that the government is proposing a Bill in which all detainees may prevented from possessing vitally important everyday items because of the criminal activity of a few.

"The Law Council firmly believes that if criminal activity is found to be taking place, then the police should be called, and standard criminal law processes should be followed. This is the normal process across Australian jurisdictions."

A petition launched by the Asylum Seeker's Resource Centre calling on MPs to vote against the amendment has so far amassed more than 44,000 signatures.

The Bill is currently before the House of Representatives.

If you think you may be experiencing depression or another mental health problem, please contact your general practitioner. If you're based in Australia, please contact Lifeline on 13 11 14 for support or beyondblue on 1300 22 4636.

Reply
Upvote
Xenophobic and base emotion politics has set up this torture chamber for people legitimately seeking asylum .
Is 7 years not enough time to check whether someone needs asylum or is, the dreaded new cliche for the unwashed, a "Terrorist".
Children imprisoned for nothing.
All refugees forbidden things that are standard in Australian prisons.
Why sign the Declaration for Human Rights if you're not going to uphold the laws.
The LNP and it's supporters are things that I have never been able to fathom, things that are inherently selfish and needing to have a "Them" to put all wrongs done to the Nation and their persons.
The ALP are much the same.
Australia, hang your head in shame.
You disgust me.
L
laura__palmer 2 years ago