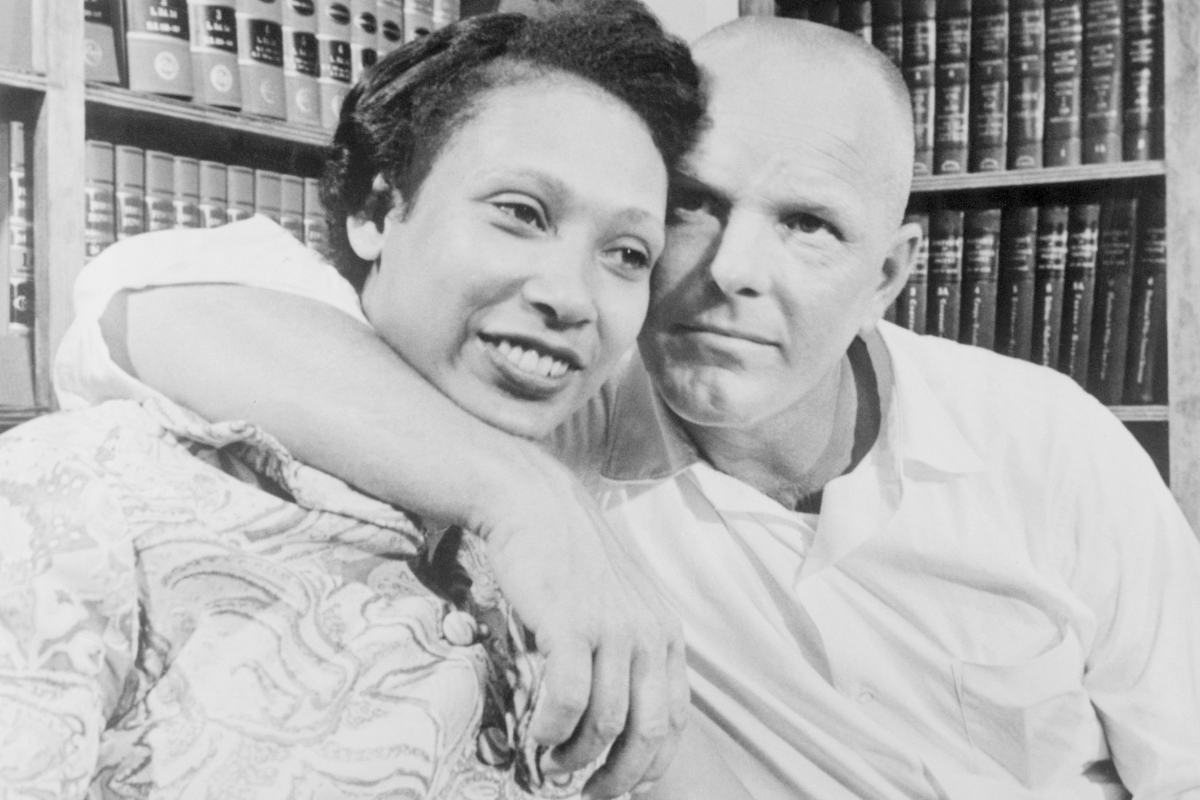 In 1959, Richard and Mildred Loving were given two options: Spend time in jail, or leave the only home they'd ever known in Virginia for 25 years.

Their crime, in the eyes of Virginia law, was love.

Richard and Mildred had met seven years earlier, when Richard was 17 and Mildred was 11. Richard, a labourer and construction worker, was a family friend, close with her older brothers.

Their home of Central Point was an anomaly in its part of the world, where Jim Crow laws meant segregation throughout the Southern states of America.

While races were divided everywhere else, they had long been intertwined in Central Point.

People of different races worked together on farms and drag-raced together, a hobby Richard was particularly fond of.

So it wasn't so strange that Richard and Mildred, nicknamed 'Bean' at the time, met when he visited her family home.

An arrest and life in exile.

In 1958, aged 18, Mildred fell pregnant with their son Donald and the couple travelled to Washington D.C. where they were legally married.

The Lovings returned home as husband and wife, but six weeks later on July 11, the couple were jolted out of bed at 2am as the local sheriff entered their home and arrested them. 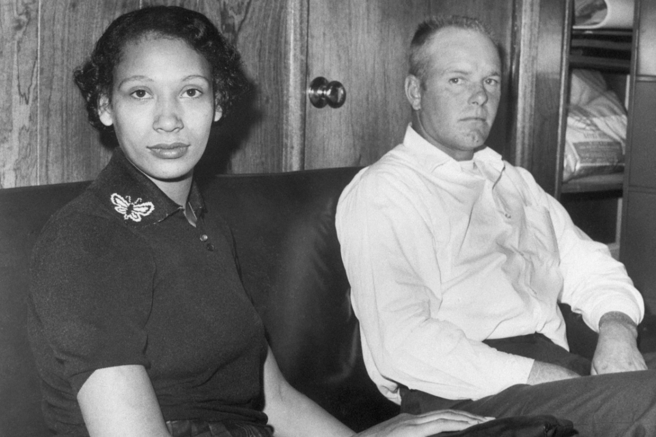 An anonymous tip had informed them the couple had broken the state's Racial Integrity Act of 1924, which forbid interracial marriage.

Richard, a white man, and Mildred, of Native American and African American descent, were charged with a felony for violating the anti-miscegenation (any marriage or 'interbreeding' of people from different races) law.

Richard was bailed the day after their arrest, but Mildred spent the better part of a month in a "tiny black cell with a metal bunk," the couple's Washington attorney Phil Hirschkop said.

It is believed Richard knew no one in town would marry them, so they drove the almost two hours to the country's capital.

The following year, the couple pleaded guilty and were sentenced to one year in jail, but judge Leon M. Bazile stated the sentence would be suspended on the condition the Lovings left Virginia and agreed not to return for 25 years.

The Lovings, who had both lived in the state their entire lives, took the deal.

They relocated to Washington D.C, where their relationship was legal, and lived in exile for years.

There they raised their three children, sons Sidney (born in 1957 during Mildred's previous relationship) and Donald,  and daughter Peggy.

But Virginia was home and the pair struggled with being unable to visit their families together, as well as financial difficulties and social isolation in the capital.

In 1963, a desperate Mildred wrote to then U.S Attorney General Robert F. Kennedy to ask for help. He referred her to the American Civil Liberties Union (ACLU), which agreed to take their case. 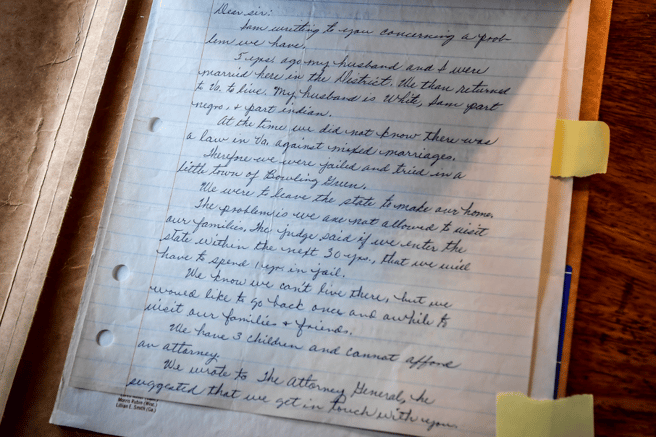 With the help of the ACLU, the Lovings filed a motion asking for Virginia Judge Bazile to set aside their sentences in November 1963. He refused, and the case was escalated to the Virginia Supreme Court of Appeals, which also upheld the original ruling.

After another appeal, the case finally made its way to the United States Supreme Court in April 1967.

The Loving's lawyers, Bernard Cohen and Philip Hirschkop, argued against this, asserting the law against interracial marriage was illegal under the 14th Amendment to the American Constitution, which states all citizens must have "equal protection" under the law.

On June 12, 1967, the Supreme Court announced its ruling. In a unanimous decision, the justices ruled Virginia's law violated the Constitution and was unlawful.

"Under our Constitution, the freedom to marry, or not marry, a person of another race resides with the individual, and cannot be infringed by the state," Chief Justice Earl Warren wrote.

The ruling not only overturned the convictions against Richard and Mildred Loving, but made laws against interracial marriage in 16 states including Virginia void (although many states didn't immediately act on this - Alabama only officially removed its anti-miscegenation statute from its state constitution in 2000).

The Lovings never intended to create such big change, that would see their marriage remembered decades later as a force for change. They just wanted to be able to make a life for themselves in Virginia.

"What happened, we real­ly didn't intend for it to happen," Mildred said in 1992. "What we wanted, we wanted to come home."

And they did. After the Supreme Court decision, the Lovings and their children returned home to Central Point where Richard built them a house.

In 1975, the couple's car was struck by a drunk driver. Richard was killed at age 45, but Mildred survived the crash, though she lost an eye.

She spent the rest of her life in Central Point, and died of pneumonia in 2008, having never remarried.

The legacy of the Lovings.

“Tell the court I love my wife, and it is just unfair that I can’t live with her in Virginia.”

It was only a mere 53 years ago that interracial marriage became legal across our nation, thanks to Mildred and Richard Loving. Their courage paved the way for so many. #LovingDay pic.twitter.com/cWBnmkd3uW

Since 2004, Loving Day has been celebrated annually on June 12, the anniversary of the Supreme Court decision.

It is not officially recognised, although there have been attempts to make it so, but takes place each year to commemorate and celebrate the ruling, to remind us of a past where interracial couples were breaking the law, and explore issues couples in interracial relationships still face.

In 2007, a 67-year-old Mildred spoke of how strange it was to be a hero to those in interracial relationships, considering she saw herself as just a girl who fell in love with a boy.

"It wasn't my doing," Loving told The Associated Press in a rare interview. "It was God's work."

She described Richard as her "rock", and said she wished he could have enjoyed the life she lived at that time: Living in the countryside they fought so hard to live in, spending time with her children and two dogs.

Mildred had rarely granted an interview, instead allowing others to tell her story through books and film.

That same year she marked the 40th anniversary of the Loving v. Virginia Supreme Court decision with a statement, stating her support for the same-sex marriage movement that was, at the time, still fighting for equality.

In 2015, when same-sex marriage was legalised following by the Supreme Court, the Loving case was cited as precedent.

"My generation was bitterly divided over something that should have been so clear and right," Mildred said in her statement.

"The majority believed that what the judge said, that it was God's plan to keep people apart, and that government should discriminate against people in love. But I have lived long enough now to see big changes. The older generation's fears and prejudices have given way, and today's young people realise that if someone loves someone, they have a right to marry.

"Surrounded as I am now by wonderful children and grandchildren, not a day goes by that I don't think of Richard and our love, our right to marry, and how much it meant to me to have that freedom to marry the person precious to me, even if others thought he was the 'wrong kind of person' for me to marry. I believe all Americans, no matter their race, no matter their sex, no matter their sexual orientation, should have that same freedom to marry. Government has no business imposing some people's religious beliefs over others. Especially if it denies people's civil rights.

"I am still not a political person, but I am proud that Richard's and my name is on a court case that can help reinforce the love, the commitment, the fairness, and the family that so many people, black or white, young or old, gay or straight, seek in life. I support the freedom to marry for all. That's what Loving, and loving, are all about."