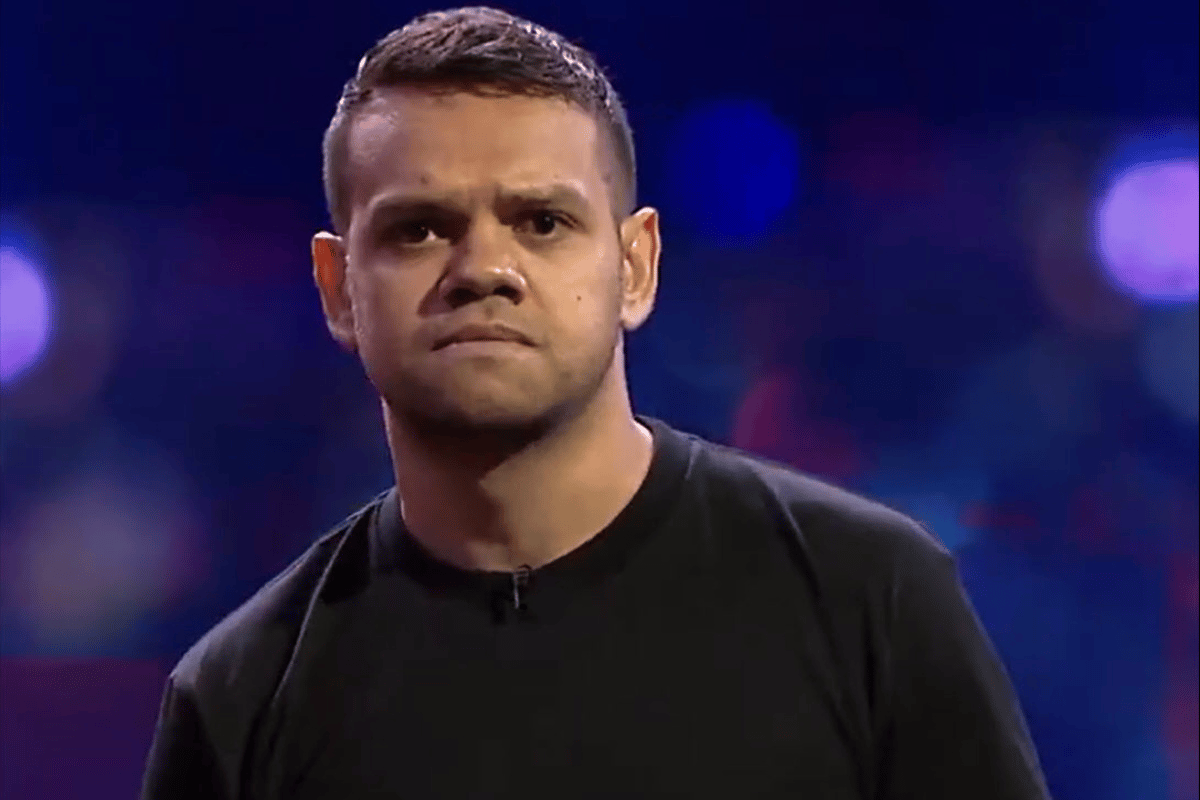 Warning: This article contains the name of an Indigenous person who has died.

Former Neighbours actor Meyne Wyatt delivered a must-watch monologue to round out last night's powerful episode of Q&A about racism and injustice towards Indigenous Australians.

Pulled from his play City of Gold, Wyatt, a Wongutha-Yamatji man from Kalgoorlie, starred down the barrel of the camera and delivered his words. They were written a few years ago, which only further cements that this is not a 'now' problem spurred on by the current movement in United States, but something that has been happening for much, much longer.

"You're not your ancestors, it's not your fault you have white skin," Wyatt said.

"But you do benefit from it. You can be okay. I have to be exceptional. I mess up, I'm done. There's no path back for me. There's no road to redemption."

He spoke about the microaggressions faced by him and every other Indigenous Australian.

"We're gonna give you that small, subtle shit - the shit that's always been there, but it's not the obvious in-your-face shit, it's that, 'oh, we can't be seen to be racist' kind of shit.

"Security guard following me around the store, asking to search my bag. That walking up to the counter first then being served second, or third, or last kind of shit. That hailing down a cab, watching it slow down to look at my face and drive off - more than once. More than twice. More than once, twice on any one occasion. Yeah, that shit I'll get weekly. Sometimes I'll get days in a row if I'm really lucky."

Meyne Wyatt closes #QandA with a monologue from his play, City of Gold. pic.twitter.com/9ALFIYRAnq

Wyatt said he didn't have the energy or the enthusiasm to call out these sorts of behaviours daily.

"It's not about that one time. It's about all those times, and seeing us as animals and not as people, that shit needs to stop.

"Black deaths in custody, that shit needs to stop.

"I want to be what I want to be. Never trade your authenticity for approval. Be crazy, take a risk, be different, offend your family, call them out.

"Silence is violence. Complacency is complicit," he said.

That monologue by @meynewyatt might be the most incredible and shattering thing I’ve seen on #qanda.

Earlier in the show, Wyatt told the panel he was sick of sitting down and being "the nice guy" while institutions killed Indigenous people.

"It's been continuous since Captain Cook landed on these shores. It's still happening. It's a denial of our existence," he said.

The episode began with a question from Leetona Dungay, whose 26-year-old son David Dungay died in custody in 2015, after being restrained, sedated and pinned down by five prison guards.

Leetona Dungay asks the panel to stand with her in demanding justice for her son, David Dungay Jr. #QandA pic.twitter.com/8XLnaMVnp8

"David cried out 'I can't breathe' many times in the space of his last nine minutes," she told the panellists.

"Despite over 430 Aboriginal deaths in custody since the Royal Commission, no police or prison officer has ever been held criminally liable. We know we have a long fight ahead to get justice.

"So, I'm asking the panel - will you join us to demand charges are laid on the people responsible for my son's death?"

Senator Bragg responded to say relations with police is a "very important issue", and "there are very bad examples and there are very good examples".

He said he was "going to commit myself to spend my time in parliament to work on these issues".

Lui said the Black Lives Matter movement had been relevant in Australia since the moment it was colonised.

"We’re not asking for the world. We’re asking to live,” she said.

"And to be honest with you, [Senator Bragg] - yeah, we can say there's good police, there's bad police, but quite frankly, if people in positions of authority can't not kill a vulnerable person who’s locked up, then maybe we need to re-look at these institutions. A lot of the recommendations from the Royal Commission into Aboriginal Deaths in Custody weren't implemented. What you can do is listen to the families. They can tell you right now what they want. Listen to the families. The answer has been here all along.

"We need politicians to implement it. And you just haven't."

Nyuon said it was imperative non-Indigenous Australians listened to what the Indigenous community were telling them.

"Perhaps sit down and actually listen to the pain you are hearing here, to truly take it in, and to realise, sometimes, we might live in the same country but experience completely different realities."

You can watch Monday's full Q&A episode on ABC iview.

On Saturday, amid protests for Black Lives Matter, an Indigenous man died in police custody.

"What would you do?" Nakkiah Lui has one question for all non-Indigenous Australians.

Reply
Upvote
4 upvotes
Powerful. Something us white people need to shut up and listen to, because we have no idea what it's like to live with black skin in this country and we need to start acknowledging the affects of colonisation, the White Australia Policy, everyday racism and the failures of governments across the political spectrum have had on First Nations people, as well as other POC that live here. We are built on racism, we are built on white privilege and white supremacy and nothing will change until we, as a nation, can acknowledge our history for what it is and listen to black voices.