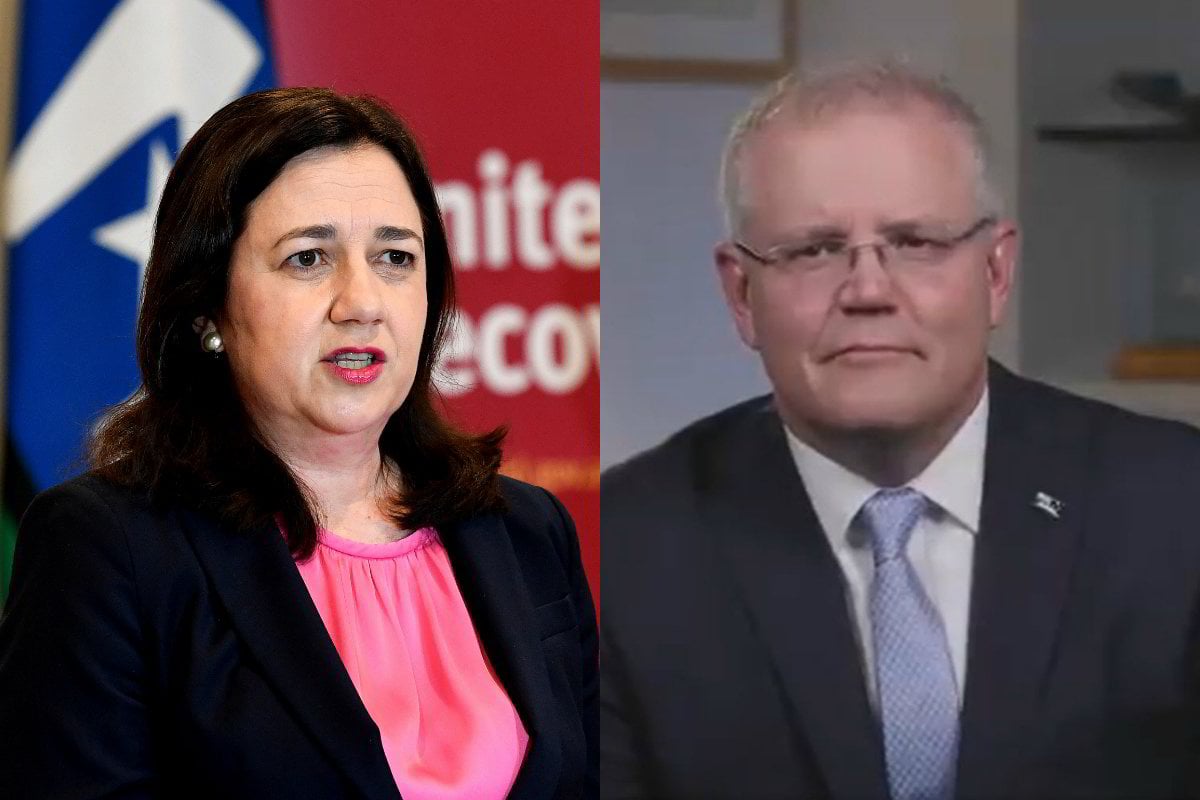 The brother of model Megan Gale has been found dead in bushland in Perth.

Police said a member of the public found Jason Gale's car in bushland in Karragullen, in Perth's south-east, on Tuesday.

A search of the area found the body police believed to be that of Mr Gale. 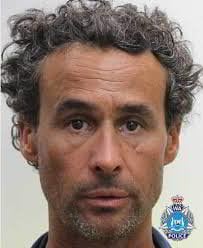 Police issued an alert last Friday saying the 49-year-old had gone missing from his Bibra Lake home and there were concerns for his welfare.

He was last seen on the morning of July 14 buying petrol and water in Pingelly, close to 160 kilometres south-east of Perth.

Police said they are not treating Mr Gale's death as suspicious, and a report is to be prepared for the coroner.

Melbourne security guard claims she was hired over WhatsApp.

A security guard who worked for Melbourne's hotel quarantine program claimed she was hired through WhatsApp.

Security guard Shayla Shakshi spoke on ABC's 7.30 about her concerns, which saw her refuse to go back after just one day on the job.

"We didn't get any training when I got there," she said.

"They just didn't tell us what training we had to do, we just had to put a mask on, put gloves on, and that's it.

"They had no training of how to use PPE [personal protective equipment], how to sanitise hands, nothing. No training at all."

She said some hotel floors didn't even have sanitiser: "You just didn't want to touch anything".

Shakshi said at the end of her shift she was told to bring her own PPE with her the next day in case they run out onsite. She was appalled and decided it wasn't worth going back for a second shift.

"I was like, no, I don't want to work at a place which is so unsafe.

"That was the first shift I did... first and last shift. I just didn't want to go back there."

Previously, a guard known only as George told Today he received just five minutes of training before standing guard at one of the city's quarantine hotels.

An inquiry into the hotel quarantine program is underway.

200 'missing' in QLD after lying about quarantine.

There are concerns of a COVID-19 resurgence in Queensland after police figures, published by NewsCorp, showed 200 people have dodged mandatory quarantine.

The figures show 185 people from other states, and countries, have disappeared since arriving at Queensland borders.

Police are searching for people who lied about their self-quarantine address or were not at the address they said they would be staying at.

Police have investigated 2322 cases since mid-April, in assistance to Queensland Health. Twenty-five had given an address but have never been found and 185 people gave false information and haven't been found.

States are weighing up further measures to crack down on the spread of coronavirus out of Victoria, as health officials wait to see if lockdowns will again squash case numbers.

NSW is urging people to wear masks where social distancing isn't possible, such as on public transport or in office building lifts.

But Premier Gladys Berejiklian has stopped short of making face coverings mandatory, as they will be in Melbourne and Mitchell Shire from Thursday.

The state will toughen its border restrictions on people wanting to enter from Victoria from Wednesday. 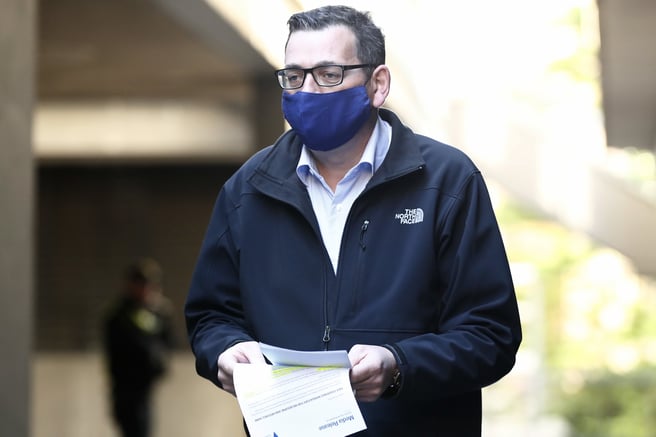 Victorian Premier Daniel Andrews wears a face mask as he walks in to the daily briefing on July 19, 2020 in Melbourne, Australia. Image: Getty.

To the north, Queensland is considering expanding its blacklist of NSW virus hotspots.

The move comes after two women were caught trying to smuggle a man with no entry permit across the Queensland border.

NSW confirmed 13 new cases, just one of whom was in hotel quarantine.

Most of the cases were linked to growing clusters at an outer Sydney restaurant and pub.

In Tasmania, officials reported a woman in hotel quarantine after visiting Victoria had tested positive.

Deputy Chief Medical Officer Michael Kidd said everyone had hoped there would be a drop in new Victorian cases over the first few weeks of the renewed lockdown, as with the earlier restrictions in March and April.

"We have got to wait and watch just for another few days to see what happens and see if we do actually turn down the curve with those numbers," he said.

Prime Minister Scott Morrison says maintaining JobKeeper at its current level is unsustainable but extending it at a reduced rate will ensure wage subsidies will go where they're needed the most.

Morrison has overhauled the government's coronavirus support, scaling back both the JobKeeper and JobSeeker payments.

"I think Australians understand that running JobKeeper at $11 billion a month is not something that is sustainable," he told Leigh Sales on ABC's 7.30 on Tuesday.

“We're in uncharted waters, the whole world is. I mean everyone is working together and learning together. Where there are mistakes that have been made, I think people have learned from that.” – Prime Minister @ScottMorrisonMP #abc730 #auspol #coronavirus

JobKeeper will be extended to March next year, but cut from $1500 to $1200 a fortnight for full-time workers after September 27 and halved to $750 for those working less than 20 hours a week.

From January, it will fall to $1000 for full-time employees and $650 for part-time workers until March.

Morrison defended the scheme on 7.30, denying claims from Sales that JobKeeper had not worked for all sectors, including those with arts-based careers who often worked gig-to-gig or contract-to-contract.

"We can take the arts, film, TV, books, music that’s really sustained people a lot during the lockdown," Sales said.

"That sector contributes billions to the Australian economy and employs 600,000 people. Fewer than half are eligible for JobKeeper."

"That's not true," Morrison interrupted. He argued JobKeeper had been a "lifeline" for many arts workers and JobSeeker payments were available for those it did not cover.

The government was clear about changes to JobKeeper, but questions remain about the future rate of JobSeeker.

The boosted rate will drop from $550 a week to $250 at the end of September until the end of the year.

That will put the base rate at about $815 a fortnight, but recipients will be able to earn $300 without it affecting their payment.

The government is expected to reveal the permanent rate in the October 6 budget.

Mr Morrison indicated it would likely be more than the pre-pandemic level of $565 a fortnight when it was known as Newstart.

- Lockdowns during the pandemic have led to a sharp, devastating rise in violence against women and children in Asia, according to a new report by Plan International Australia and Save the Children. Among the findings, the report said there was a doubling of domestic violence cases in Thailand between February and April.

- The first comprehensive review of the COVID-19 response in the United States has found the US is failing to report vital information that could help track the spread or prevent the deaths of thousands of Americans. It found the US does not have standard, national data on the virus and lacked standards for state-, county- and city- level public reporting of this life-and-death information.

- New research predicts polar bears could be extinct within 80 years, with climate change leading to a lack of prey and starving them into extinction.

Reply
Upvote
2 upvotes
"But Premier Gladys Berejiklian has stopped short of making face coverings mandatory, as they will be in Melbourne and Mitchell Shire from Thursday. "
Of course she has. Let's wait until we're getting hundreds of cases a day too, like Victoria.
I'm in Sydney and I currently wear a face mask whenever I have to go inside somewhere (except work, where we are forbidden from wearing them). The vast majority of people I see are not wearing masks. Many, many people are not going to wear them until they're told they have to.
G
guest2 2 years ago

Reply
Upvote
@fightofyourlife well, you can expect more cases in NSW, if the Sydney BLM march goes ahead this Saturday.
M
mamamia-user-482898552 2 years ago