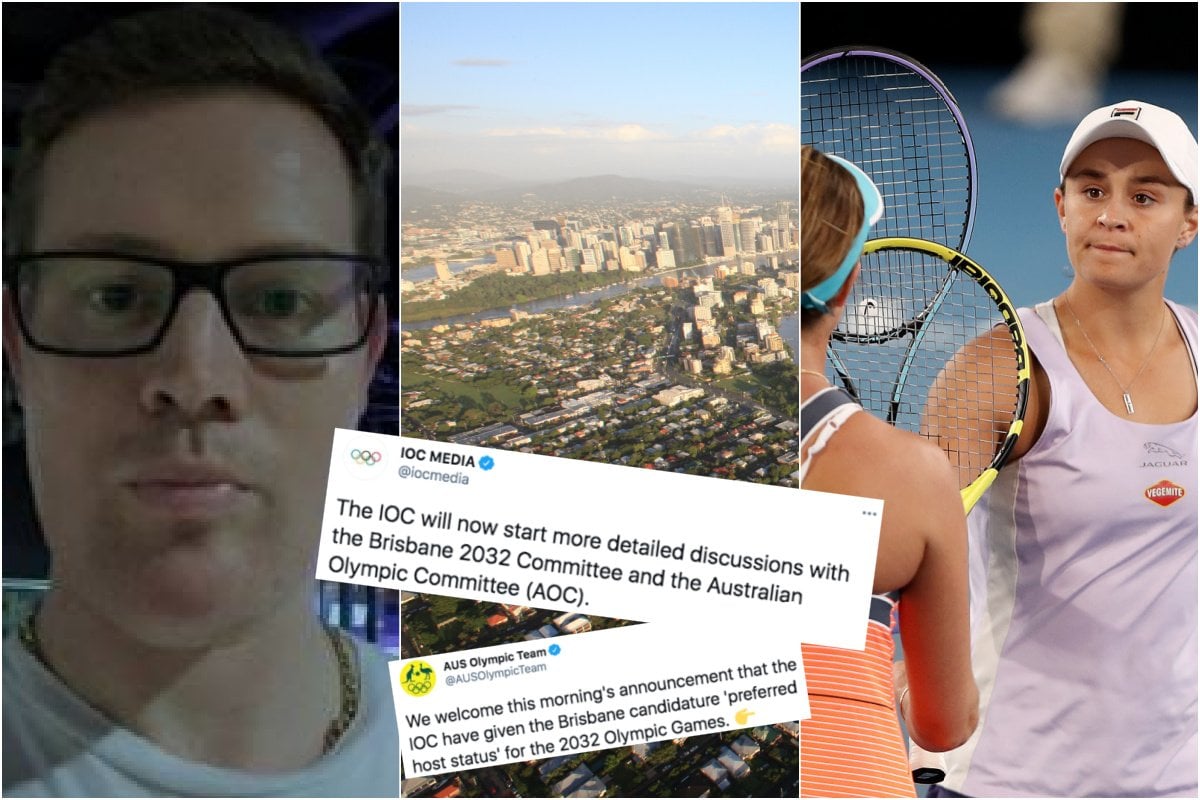 NSW Police have issued a warrant for the arrest of 41-year-old Matthew Donaldson for attempted murder after he allegedly attacked a woman with a sledgehammer at Primus Hotel in Pitt Street, in Sydney's CBD, on Tuesday night.

Donaldson is believed to be in the New South Wales Blue Mountains area armed with a gun, with anyone who comes across him urged to dial triple zero.

"Donaldson is described as being of Caucasian appearance, approximately 182cm tall, solid build, with light brown hair. It's believed he may be in the Blue Mountains area and may be armed with a firearm," police said in a statement.

Read the chilling Facebook posts written by a gamer the same night he 'attacked a woman with a sledgehammer' https://t.co/Z31R4huhvv

At 9.17pm on Tuesday night, less than two hours before police arrived at the hotel to find the seriously injured woman, Donaldson allegedly posted pictures from inside the Primus Hotel room with the caption "Game over".

When one friend commented "What game are you playing?", Donaldson replied '"Life or death, I lost".

The woman was treated for head lacerations and was taken to hospital in a critical condition.

Brisbane is IOC preferred partner for 2032.

The Olympic Games are set to return to Australia in 2032 after Brisbane and the state of Queensland was installed as the preferred bidder for the event by the International Olympic Committee (IOC) following an executive committee meeting.

IOC president Thomas Bach told a news conference that the decision "was not a decision against anybody.

"This is just a decision in favour of one interested party at this moment in time."

We welcome this morning's announcement that the IOC have given the Brisbane candidature 'preferred host status' for the 2032 Olympic Games. 👉 https://t.co/KeFv23ljNh pic.twitter.com/jY7948PtYe

Preferred status means the IOC will negotiate exclusively with the Australian bid.

Brisbane, if negotiations conclude successfully and are then approved by an IOC Session, would be the third Australian city to host the Games after Melbourne had the honour in 1956 and Sydney in 2000.

Former Liberal staffer Brittany Higgins has made a formal police complaint over her alleged rape by a colleague at Parliament House.

Ms Higgins revealed the sexual assault allegation last week and on Wednesday reinstated her complaint about the 2019 incident.

Her coming forward led to three other women alleging they were assaulted by the same man.

He was sacked as a ministerial adviser because of a security breach on the night of Ms Higgins' alleged rape.

Senator Linda Reynolds, who employed Ms Higgins at the time of the alleged assault, is now on indefinite medical leave and in hospital after advice from her cardiologist.

Home Affairs Minister Peter Dutton has joined the growing list of people who knew of an alleged rape in Parliament House before Scott Morrison.

Mr Morrison said his office first knew of the allegation on February 12 but took almost three days to notify him.

These statements raise even more questions. Why did the AFP tell @PeterDutton_MP about Brittany Higgins' rape allegation the day BEFORE @samanthamaiden went to the PMO for comment? And yet .. the PM still wasn't told?! #auspol @10NewsFirst pic.twitter.com/qrOrf4Esr1

Public confidence in the coronavirus vaccine rollout has been rocked by revelations a doctor, who had not undergone the proper training, gave an incorrect dose to two aged care residents in Queensland.

The doctor was employed by contractor Healthcare Australia to deliver the jabs at the Holy Spirit aged care facility in the Brisbane suburb of Carseldine.

He has now been reported to the Australian Health Practitioner Regulation Agency and stood aside from the vaccine program.

In the wake of two elderly people who were given an overdose of the COVID vaccine, @richardmcolbeck admits "this is the last thing we needed in the first week of the rollout". #9Today pic.twitter.com/KAqF70TbTi

One of the vaccine recipients, an 88-year-old man, was admitted to hospital for observation and on Wednesday was showing no signs of adverse reaction.

A 94-year-old woman is being monitored in the aged care home.

Health Minister Greg Hunt initially told reporters and parliament on Wednesday the doctor had successfully completed the vaccination training course. But he subsequently reported back to parliament that the training had not been completed.

Healthcare Australia had initially advised the minister it had copies of the certificates of completion "for each health professional involved in the vaccine rollout", but this turned out to be inaccurate.

The minister has asked his department for action against the company and the doctor.

Tiger Woods is awake, responsive and recovering after a single vehicle crash in LA.

Woods was driving alone through a sweeping, downhill stretch of road through coastal suburbs of Los Angeles on Tuesday when his SUV struck a sign, crossed over two oncoming lanes and flipped several times before coming to rest on its side, its airbags deployed.

The crash caused "significant" injuries to his right leg and he underwent what was described as a "long surgical procedure" at Harbor-UCLA Medical Centre.

The bones were stabilised by a rod in the tibia. He said a combination of screws and pins were used for injuries in the ankle and foot.

"I will say that it's very fortunate that Mr. Woods was able to come out of this alive," said Carlos Gonzalez, the deputy from the Los Angeles County Sheriff's Department who was the first on the scene.

No charges were filed, and police said there was no evidence he was impaired.

States close to NZ, as NSW reports being 'nearly there' as restrictions ease.

The NSW premier says the state is "nearly there" in terms of restoring full freedoms to its residents amid the COVID-19 pandemic, but should not treat the rollout of vaccinations as a licence for complacency.

Ms Berejiklian announced indoor gathering limits in NSW would rise to 50 people on Friday, up from 30. Caps at weddings will remain at 300 but up to 30 people will be permitted to dance at any one time.

NSW restrictions to be eased from Friday
50 people allowed in home - up from 30
Weddings - 30 people on the dancefloor at any one time
Weddings .. currently a 300 cap - might be eased in 3 weeks
Standing up and having a drink will be allowed indoors from March 17

There will be 50 people allowed in gym classes, while indoor choirs can now number 30 and cinemas can operate at 100 per cent capacity. Standing and drinking at an indoor bar will be permitted from St Patrick's Day if no further COVID-19 outbreaks occur before March 17.

The state declared Auckland as a hotspot on Wednesday evening after three new cases were reported there on Tuesday.

Victoria and Queensland are also clamping down on travellers arriving from New Zealand after an outbreak of the coronavirus in Auckland. Passengers arriving from across the ditch must isolate for 14 days in hotel quarantine.

Ash Barty grapples with second loss in a week.

Ash Barty says the public expectation will never stack up with reality as she grapples with a second shock loss in a week and an injury that will see her miss next week's Qatar Open.

And she later pulled out of next week's WTA tournament, citing a leg injury and suggesting in a statement that she'll be ready to compete in Miami late next month.

"You know there are no easy matches going into any tournament. From an expectation of a public point of view, I think (winning all the time) is their views, and that's their opinions. But from a playing perspective, it's about what do we expect from us as players and what do we bring to the court each day. And in the end the result it just is what it is, it's not always going to go our way."

- At least 12 million people living in the United States will be provided with free face masks under a federal government plan to confront the pandemic.

- Germany has declared it's in the throes a "third wave" of COVID-19, amid fears several other European countries are headed down the same path. The Netherlands, Sweden, Ukraine, and Greece have also reported spikes.

F
fightofyourlife a year ago

Reply
Upvote
Can any drinkers explain to me why standing up and drinking is such a desirable thing? Every day in the NSW Health posts, there are people complaining that they can't stand up and have a beer. What's the big deal? Why is the easing of this particular restriction so exciting?
G
guest2 a year ago

Reply
Upvote
@fightofyourlife.  Because the govt loves its control
C
cat a year ago