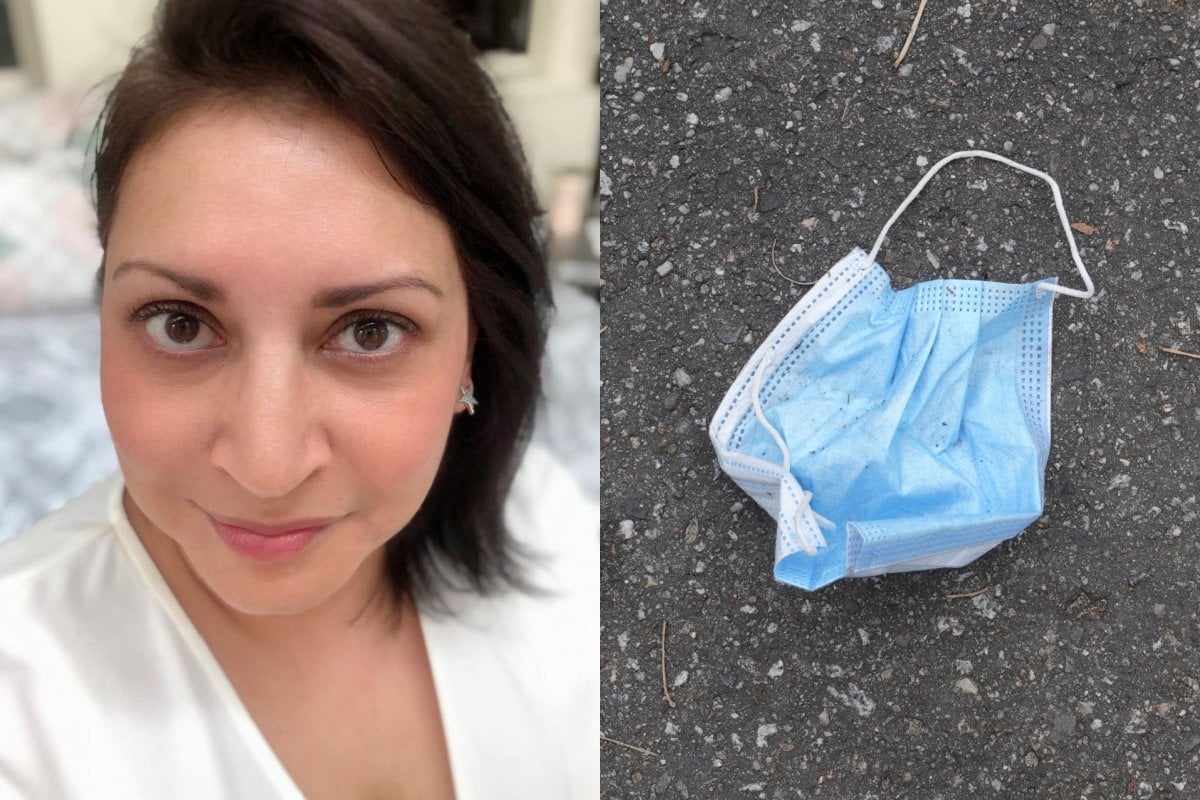 In case you haven’t noticed, the world has completely changed in a year, and there are many unprecedented ideas we’ve had to deal with.

Things such as the normalisation of wearing face masks. Finding that all your favourite restaurants have closed. Needing to work out how to press a lift button without touching it with your hands.

Realising the shared pen at the post office is a potential risk to your health and safety.

Watch: A Zoom call from the future. Post continues below.

Yes, it’s a whole new world and with that, there is a whole new social order. Which means society’s standards have changed, and along with them, an evolved concept of how we treat each other. An age we thought we’d ever see in our lifetimes.

Here are the 10 unprecedented manners that matter in 2021.

Did you know it can still carry virus particles? Throw it in the bin, you grub. Blurgh – seeing one carelessly thrown on the ground is as bad as seeing a used condom on the street.

(Side note – how could you discard a condom carelessly when you’ve been good enough to use one in the first place?)

FTLOG, do not force an elbow shake on someone you’ve just met. Elbow shakes are still touching and getting close. And they’re also stupid.

3. THY SHALT NOT COVET THY NEIGHBOUR’S TOILET PAPER.

This was always a thing, but it’s become more important since the dire days of April/May last year.

We all know neighbours become good friends... when they don’t nick stuff from each other, so just don’t do it. Not when you’ve 'popped in for a cuppa', and most certainly not when they’ve had their monthly carton delivered to their door (I’m looking at you, apartment 12).

4. Always accept hand sanitiser when it’s offered to you at someone's home.

I’ve seen too many adults squirm at the thought of killing germs off their hands, in a private place they’ve been invited to.

Grow up. You’re an adult and can handle a little goo on your hands.

Think about other people. Get yourself in the moment and pretend its lube for the 20 seconds it takes to dry, if you must.

5. Don't ask someone to hold your phone/drink for you, because they won't want to and it will be awkward.

Yes, I found this out the hard way when it happened to me at Christmas.

A very close friend refused to hold my drink and phone while I adjusted my shoe strap. Even though I was slightly tipsy and obviously in need of assistance, my friend did the right thing AND WOULD NOT COMPROMISE OUR SAFETY AND I HAD TO HOLD A GRUDGE AGAINST HER ALL NIGHT.

6. Give way in tight public spaces.

No, this is not a sex euphemism. I’m talking about entering bathrooms and lifts. Standing on the escalator, passing each other in shops.

If someone is barging towards you, or is having difficulty walking straight, take the high road and give way.

It’s simply the right, socially conscious, thing to do. Don’t stand your ground like it’s 2019.

7. Exercise your right to reject invitations and affection and other intimate things you hate.

You’ve always had these rights, but now you have a socially acceptable response to your uncle who’s just demanded, "Give us a kiss, love."

The best response is to take a quick step back and lightly say, "I wouldn’t want to make you sick!"

Similarly, refusing an invitation from someone playing fast and loose with COVID number rules is as easy as, "I don’t want to get busted by the cops!"

Assert your rights politely – aka, take the blame for being the responsible one.

Again, not a euphemism.

Don't expect anyone to hold a door open for you, putting themselves at risk, whilst you sail through without even a glance at that germ-ridden door handle.

Don’t use your foot to press the button at the pedestrian walk or anything else other people may touch with their fingers (you feral).

The space of the ruler you used to graffiti in maths class is not enough. It’s 1.5 metres, people.

Many times when people have been too close, I’ve just said "excuse me", and pointed to the brightly-coloured and unmissable guidance dot on the floor (which is usually a metre behind them).

Maybe the 89-year-old in front of you chatting to the service person and taking her freaking time hasn’t seen or spoken to another person or a week.

Perhaps the waiter at the restaurant is new, and worked in accounts for a company that’s had to close, and now he’s back at home listening to his parents argue over whose turn it is to have the tv remote for the evening, and learning an entirely new skill set and industry.

A lot of people are having terrible times for many reasons, so just be patient and scream silently behind your mask as needed.