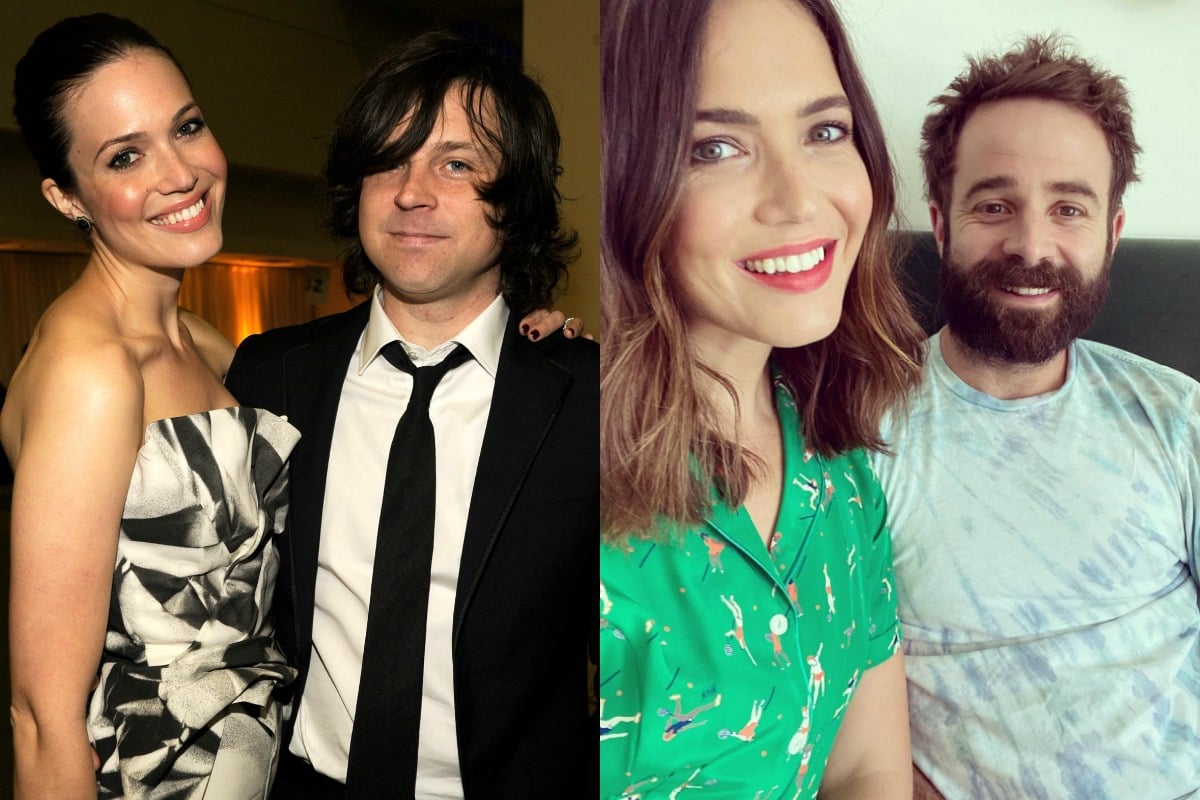 Two years after tying the knot, Mandy Moore and Taylor Goldsmith are expecting their first child together.

The This Is Us actress announced the exciting news in an Instagram post last week, sharing a series of photos of her and Goldsmith looking very happy together as she showed off her baby bump.

The couple married in an intimate backyard wedding at Moore's home in 2018. But their love story actually began three years before that in 2015. And like a lot of relationships these days, it started over social media.

At the time, Moore was finalising her divorce from her ex-husband Ryan Adams and shared a post about Goldsmith's band, Dawes, on Instagram.

"Somehow, Taylor saw it and sent a note to me," Moore later told People.

"We started emailing back and forth, then we went on a date and the rest is history. Thanks Instagram, for helping me meet my fiancé!"

With Goldsmith often on tour, the couple would spend "hours FaceTiming each other".

"We fell in love before we’d even really held hands or kissed or anything. It was great," she told the publication.

In 2018, she told Glamour she knew Goldsmith was the one, based on how he reacted to her relationship breakdown with Adams.

"I was still dealing with the trauma of my divorce when we started dating," she explained.

"Taylor was steadfast in his support - that was a huge sign for me."

"I can imagine no better partner. He's going to be the most tremendous father. I view the past as a stepping-stone to get me where I am today. I would gladly weather all of that a million times over if it brought me to Taylor again."

Here's a look back at some of the celebrities she has dated in the past.

Before dating Goldsmith, the 36-year-old was married to singer-songwriter Ryan Adams. They first met in 2007, when Moore was 23, and tied the knot two years later.  Throughout their six-year marriage, the couple kept their relationship fairly private.

In 2014, Adams hung up on a Melbourne radio interview after being repeatedly asked about his marriage.

"OK, so I just hung up 'cause I was on the radio getting asked about my wife," he said after the call, Buzzfeed reported.

"I was really nice about it the first time, and I'm sorry, but I won't repeat myself. The deal is this: I'm a private person and I'll be a gentleman and say I'm not talking about my marriage ever. I'll never talk about it. Ever."

They eventually split in 2015 before officially divorcing a year later. 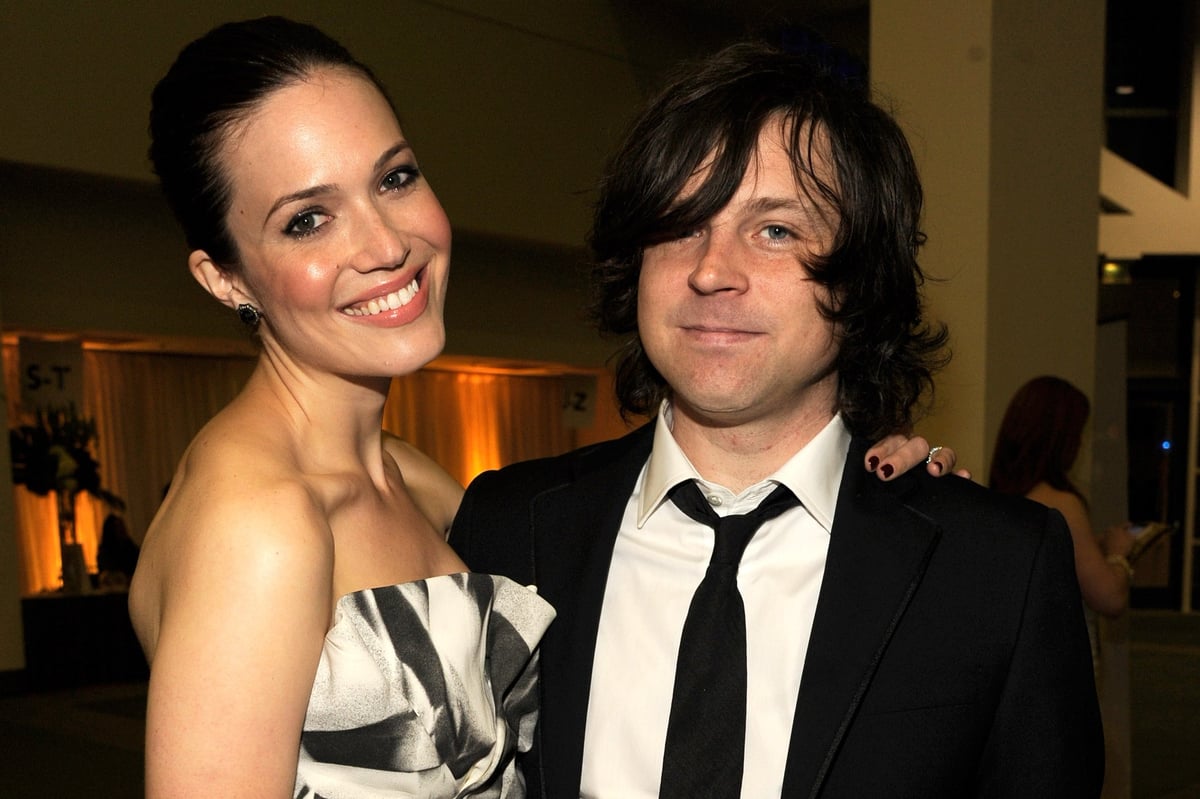 In 2018, Moore first discussed Adams after their divorce in a Glamour profile.

She explained feeling "spiritually and fundamentally stuck" leading up to their divorce, which damaged her personal relationships and career.

"I don't feel guilty for [the divorce]. I don’t fault myself for it," she said.

"When people said, 'I'm sorry,' I was like, 'No. Sorry would have been had I stayed in a very unhealthy situation' I didn't. I found my way out. And when I did, things opened back up again."

In the days following the interview, Adams shared, deleted and then apologised for a series of tweets he sent about his ex-wife.

"She didn't like the Melvins or BladeRunner," Adams tweeted. "Doomed from the start... If only I could remember the start lol."

He then, in a tweet deleted soon after, claimed to have been so high he didn't remember their 2009 wedding.

"When someone told me we got married, I thought they were joking," he said, CNN reported. "Then I realised how many painkillers I was taking. Honestly, there weren't enough to numb the shock. Gollygooops."

He apologised for his tweets a couple of days later.

Thank you for the kind messages. I am speaking with a grief/ crisis counsellor.
I apologize if I caused anyone any worry. Depression, anxiety/ panic attacks & grief are very real and serious issues.
If anyone is suffering I urge you seek help. And cats. pic.twitter.com/mmm6jrx1Q7

I apologize for my remarks. I was trying to be funny. But I have and will always choose to remember the amazing moments.
It isn't classy or ok lessen what was. I am happy for everyone and doing my best.
Thank you for taking the high road, Perez. Wishing you & your fam well. https://t.co/ysoV0Jp7Dh

Moore later became one of seven women who spoke out about Adams' "pattern of manipulative behavior" in a report for the New York Times in February 2019.

Moore told the publication her marriage to Adams was psychologically abusive.

In July this year, Adams released a letter via the Daily Mail, apologising for his past behaviour.

"There are no words to express how bad I feel about the ways I've mistreated people throughout my life and career," Adams wrote.

"All I can say is that I'm sorry. It's that simple. This period of isolation and reflection made me realise that I needed to make significant changes in my life."

Moore later reacted to Adams' statement during an appearance on the US Today show, saying she hadn't heard from him.

"I am speaking for myself, but I have not heard from him, and I'm not looking for an apology necessarily, but I do find it curious that someone would do an interview about it without actually making amends privately," she continued.

On Twitter, she described the statement as an "empty, performative act of contrition".

And can we also just move on from giving space to this nonsense and empty, performative acts of contrition and focus on real news? Like #JusticeForBreonnaTaylor. https://t.co/x7rMDZdUNG 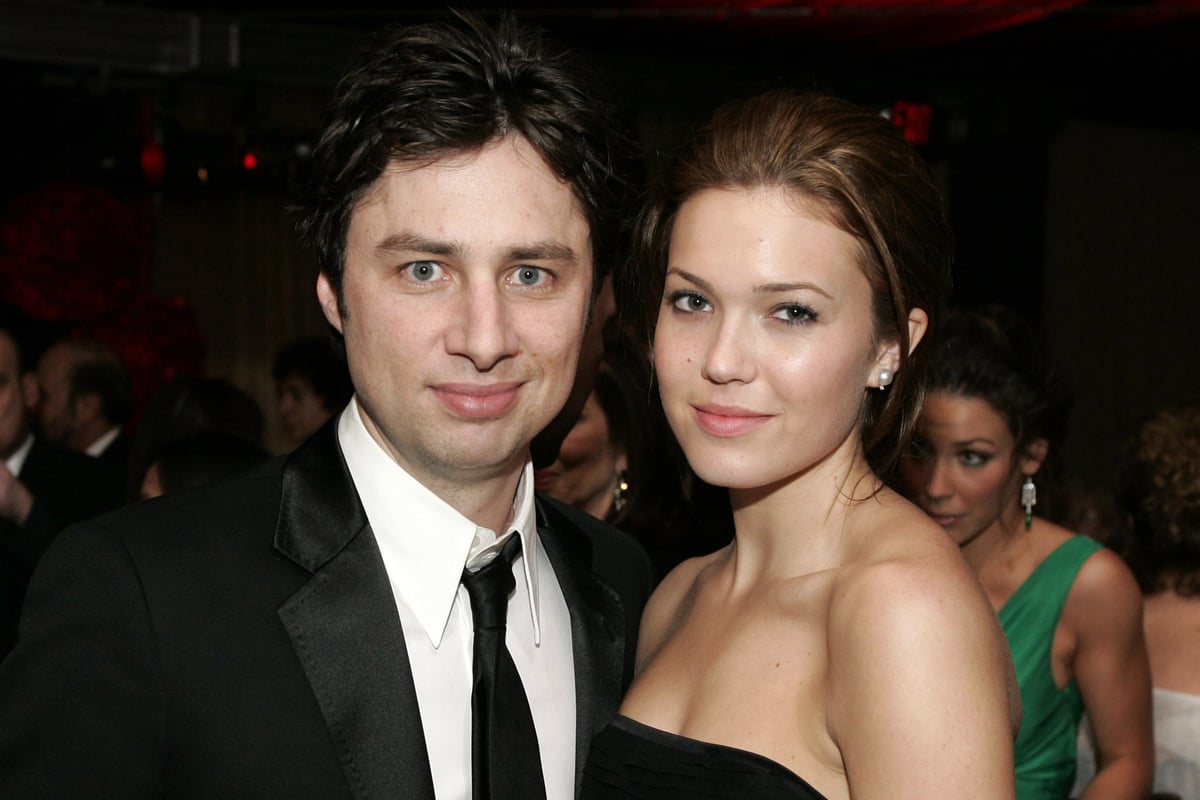 The This Is Us star was first linked with Zach Braff in late 2004 before guest-staring on Scrubs with him in 2006.

That same year, she told Cosmopolitan that she felt lucky to be dating someone so supportive and "understands how hectic it gets and why I'm so tired after work".

Alas, the couple went their separate ways in 2006 after two years together.

Braff later talked about the challenges of dating "super famous girls" in an interview with Howard Stern in 2014.

"Remember, I did that once before when I dated Mandy Moore and it was not a good — I didn’t like it," he said.

"When you date another famous person, that’s when they really hound you. That’s when the paparazzi are outside your house, and that’s when you can’t ride your bike through Manhattan, because they follow you."

Before Braff, Moore was in a relationship with tennis star Andy Roddick, who she began dating in 2002 after they met while filming a movie in Canada.

"We met in Toronto — I was doing a movie and somehow he and another tennis buddy of his came to visit me on set. I met him that way," she said told Howard Stern, according to Yahoo! Entertainment. 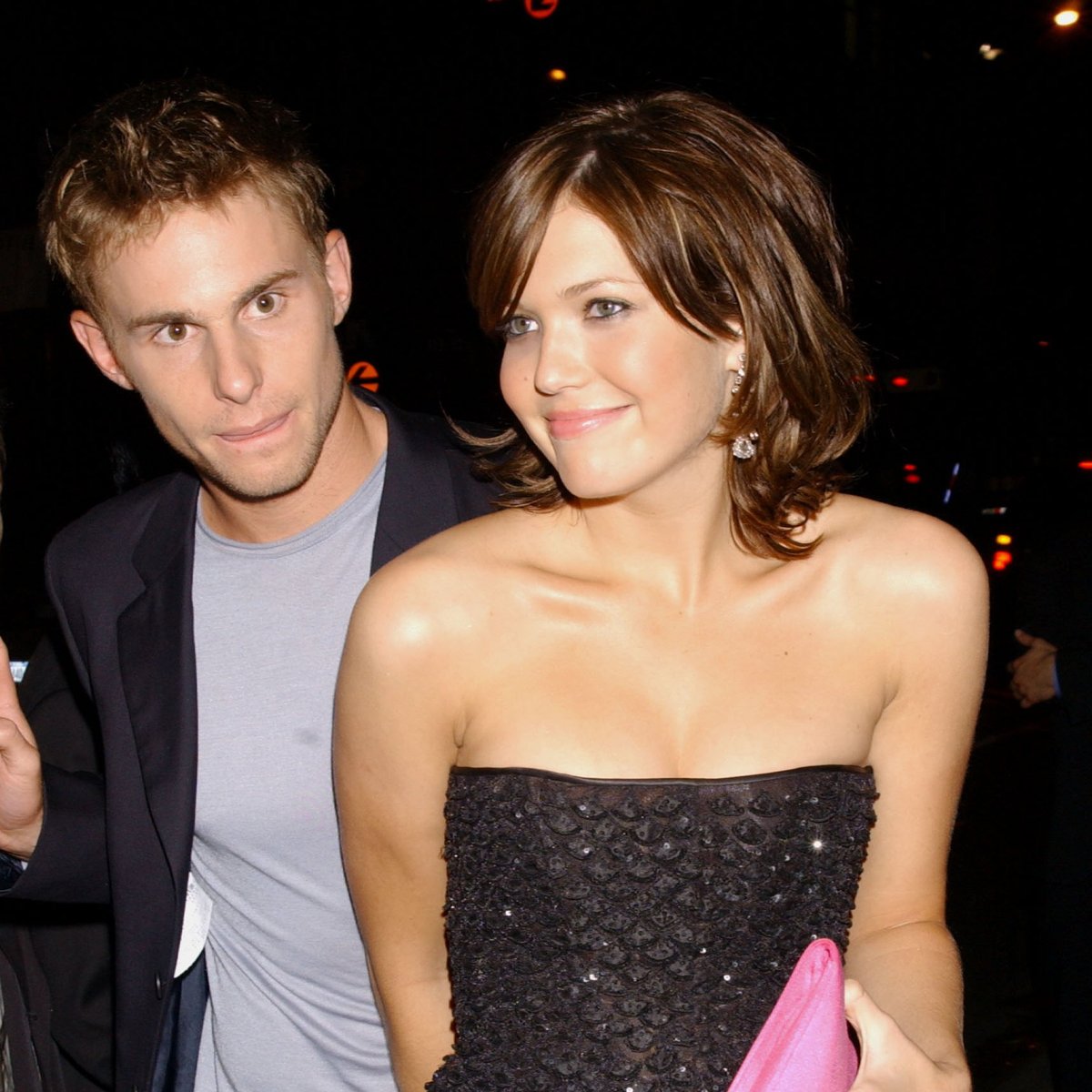 While they were only young when they dated, Moore said their breakup in 2004 hit her hard.

While the details of their split remain unclear, Moore told Stern she had since moved past it.

"He’s like married with kids and he seems super happy, and I’m happy for him...We were kids, I don’t care. Ten years ago, I would have had an axe to grind, but now I’m like whatever."

Moore was just 15 when she met That 70s Show star Wilmer Valderrama at a photo shoot for a teen magazine.

The pair dated between 2001 and 2002 but four years later Valderrama told Howard Stern during an interview that he previously took his Moore's virginity when they were together.

"The sex with Mandy was good, but it wasn't like warm apple pie," he claimed.

The 36-year-old later called him out for lying in an interview with Elle, saying his comments were "utterly tacky, not even true, and it hurt my feelings because I like him". 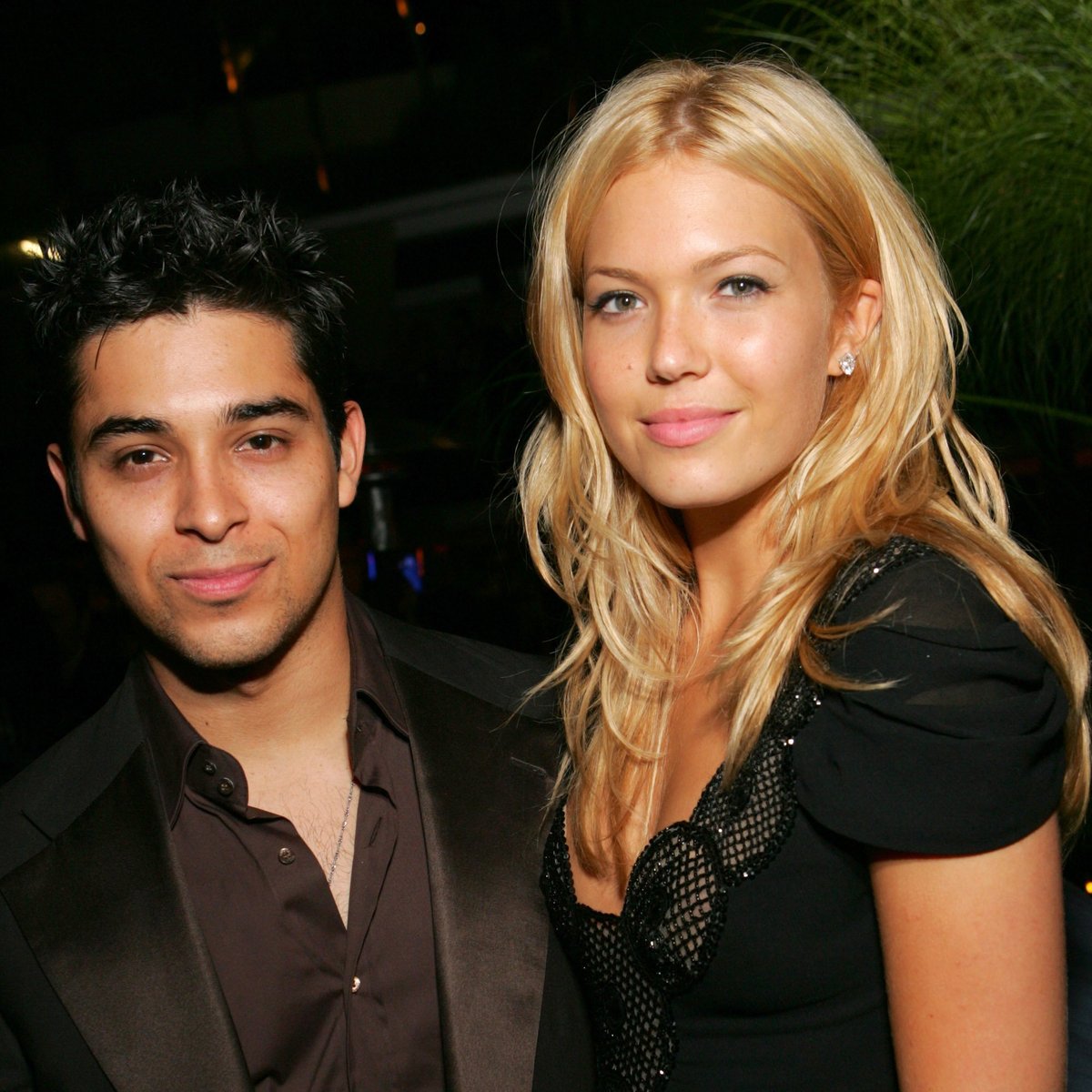 The actress addressed the scandal again in an interview with Howard Stern in 2018, confirming again that he did not take her virginity.

"I dated him when I was 16 and 17," she said. "I love him and I still love him, and he’s a very good friend and that’s why I was so shocked by it because not only was it a fib, but it was so unlike him, it was so uncharacteristic."

Moore also explained that she was "very hurt" when she first heard Valderrama’s comments and later called him and asked, "Where did this come from?". "And I remember in the moment he tried to explain it away, that sort of he did get caught up, and like he maybe insinuated more than outright said it. And I was like, 'No, you outright said it'," Moore told Stern.

"I was like, ‘Why would you ever talk about that to anybody and lie about it, first of all!?' I was like oof!"

She added that the pair "don’t talk about it now" but are still friendly with each other.

"I moved past it now. I mean, this was like 2005 or something? We’re not that close, but we’re friendly. We have some mutual friends."