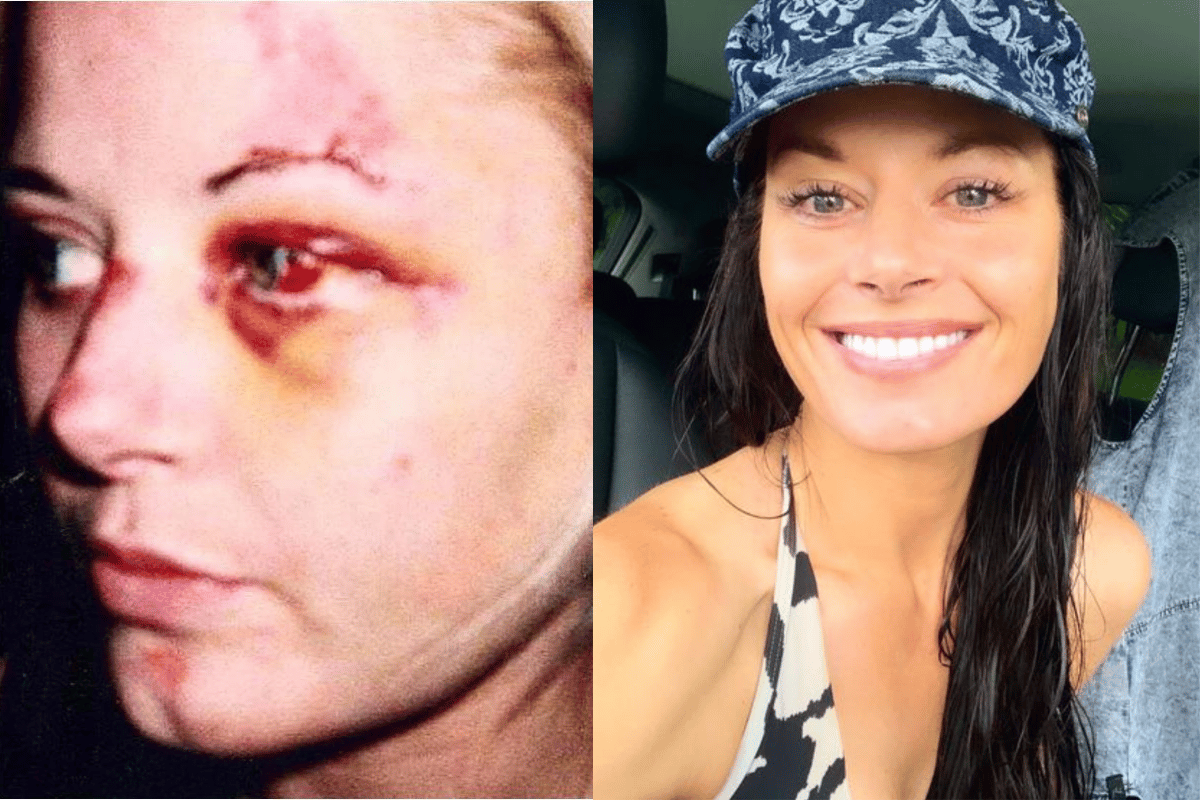 In 2002, Madeleine West had finished a long day filming Neighbours. She was walking down Oxford Street in Sydney after work, on the lookout to grab some snacks.

Twenty minutes later, she was loaded with everything you could need for a late-night meal, from cereal to chocolate to corn chips. Satisfied, she ventured back to her hotel.

It was at this point that her life changed forever. She was hit by a bus.

Reflecting on the traumatic incident 20 years later on Mamamia's podcast Restart, West labelled it as "the most unexpected restart of my life".

Listen to Restart: The day Madeleine West was hit by a bus. Post continues after audio.

On that fateful day when West was hit by the bus, she was actually standing on the pavement, when the bus hit her "square in the head".

"The point of impact, I was thrown a couple of feet, and then landed on my face and skidded a few feet more along the pavement. It required a skin graft from my butt and I had burst all the capillaries in my eyes," she said on Restart.

She sustained a number of serious injuries, some of which are visible in a graphic photo she shared to Instagram two years ago to commemorate 18 years since her near-death experience.

"I'm celebrating 18 years since being hit by a bus in the head. Always wanted to be the kind of girl who stopped traffic. Just preferably not with my face."

The photo was taken on West’s road to recovery, "but doesn’t reveal the three skull fractures, leaking brain fluid, the cerebral hemorrhage and hematoma, the busted teeth, broken capillaries, the wounds that wouldn't knit, the endless nights of excruciating pain, the months of therapy to regain gross motor skills".

When it came to losing her gross motor skills, it left West unable to speak properly. She also couldn't feed herself, and she lost her short-term memory. The pain of the skull fractures healing was "monumental" and incredibly hard to describe, West said on Restart. And the icing on top of the cake was the fact her wallet was stolen while she lay in a critical condition in the gutter after the incident.

But at the time, one of the main things that West couldn't stop thinking about was her appearance. Once her management team was notified that West was in hospital, they immediately asked for a plastic surgeon to perform the procedure.

"My face had swollen to twice its normal size, and it was completely black and blue. I'd lost all the skin down one side of my face and half the teeth in my upper jaw. And in that moment, I wanted to die. I thought everything I had worked for - I'd wanted to become an actress since I was five years old - was gone. Down the toilet. I wanted a nurse to come in, slip me some sleeping pills and just let me slip away. That's how important my appearance was to me."

Speaking to Mia Freedman on No Filter in 2020, West said she had been discouraged for a long time from sharing the long, complicated journey she faced due to her brain injury.

“I was still working on Neighbours so my representatives at the time and management in the company at the time, who are no longer there [discouraged me]. It would require me to open up and discuss things that I didn't really have the language for at that time but I guess there is always that sensibility of longevity. When you're young, I was all of 21, you tend to embrace that and carry that forward and go 'okay, well this is how I have to perform'. So I was encouraged to keep that side of me closeted for a long time."

After an arduous month, including rehabilitation and reconstructive surgery, West did return to the Neighbours set.

And after leaving the soap in 2004, West dabbled in improv, comedy and song-writing alongside her acting career. Among her most well-known roles are as an escort in Satisfaction, underworld girlfriend Danielle McGuire in Underbelly, Kath Rickards in Network 10's Playing for Keeps. And in 2017 she returned to Neighbours as both Dee and her twin sister Andrea.

Of course the insecurities over her appearance weren't immediately healed. That took time. And as West said, for a long period she "made the mistake of equating my appearance to my ability".

"I kept thinking the way I looked was the most important thing about me and for me that was reinforced every day of my life: I'd go to work and be made pretty, I'd stand on set and pretty lights would be put on me and pretty clothes would be put on my body. That seemed to be the sum total of my value," West explained.

"Being hit by a bus and having my face messed up and rendered almost unrecognisable, I really had to ask myself an important question and that was: 'did I become an actor so I could be on the cover of magazines in a bikini and look sexy, or was it so I could be a storyteller?' and it was the latter. With that came the understanding a storyteller could come in any way, shape or form."

Unattainable perfection is no longer something West strives for.

"Now I'm really proud to say that I'm comfortable in the skin that I live in," she said on Restart. "With an ageing face and with the bar for what is considered attractive is getting higher and higher every day thanks to perfectly filtered images on Instagram, it's getting increasingly harder to accept what we have."

Along with the challenges of overcoming insecurity, West has also experienced PTSD as a result of being hit by the bus.

"It really came to the fore recently. It was just an innocuous situation, I was going across the road to get some milk," she said on No Filter.

"I came out of the convenience store and a bus pulled close to the curb and I panicked. I went into complete fight or flight. I was standing frozen and aware that I looked like a fool, my kids were in the car across the road and they could see me standing there [hyperventilating] and I remember thinking 'this is so embarrassing but I can't stop it, I need to do something about it'."

That's why, in June 2020, West flew to Sydney to visit the very bus stop where the accident took place on Oxford Street in Darlinghurst.

"I stood there and I'll be honest, I was a mess. I felt like a child having a tantrum, I was hyperventilating, I started crying, I was trying to hide the fact I was crying.

"I was huddled on the park bench and the saving grace for me was a woman put her hand on my shoulder and said 'are you okay?' and instead of going 'yeah, I'm fine!' I just said 'I'm not, I got hit by a bus at this bus stop 18 years ago and it's really terrifying'.

"She said 'it's okay, it's okay, can I sit here with you?' and she stayed with me for four and a half hours. We just stayed there, and she watched me go through the whole process."

West said the woman's name was Karen, but besides that, they didn't exchange any personal details and it really made her realise the kindness of strangers.

"To have a complete stranger ask me if I was okay, rather than being a 'do-gooder', she really felt like an anchor. The fact she took the time to contact and check in with me, it taught me that fighting your fears does set you free. It played a pivotal role in my healing."