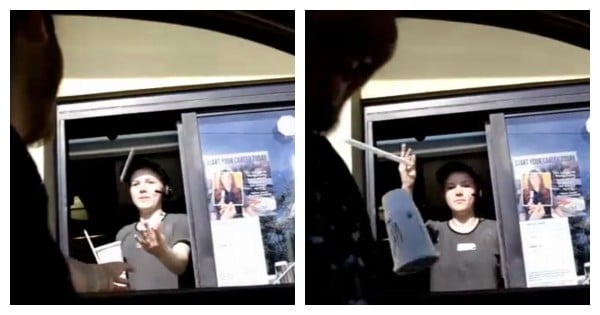 One small prank for man, one giant win for Maccas workers everywhere.

A female McDonalds worker in the United States threw a full cup of coke at two young men who thought it would be hilarious to try and scare her.

The two men approached the drive-thru window with the camera rolling and genius plan was they’d honk the horn as she handed over their food.

The plan backfired when the worker seemed more irritated than alarmed at the sudden noise.

“You’re not going to get your drink, go!” she said.

The worker then throws the full cup of coke into the car and drenches the two guys. After initially calling the worker a "fucking bitch" the two laugh and recognise their stupidity.

"That's what happens when you prank, they get kinda mad," one said. "This might be the beginning of this prank."

Yes. I would love to get on board a prank chain where dudes get their cars (and egos) drenched.