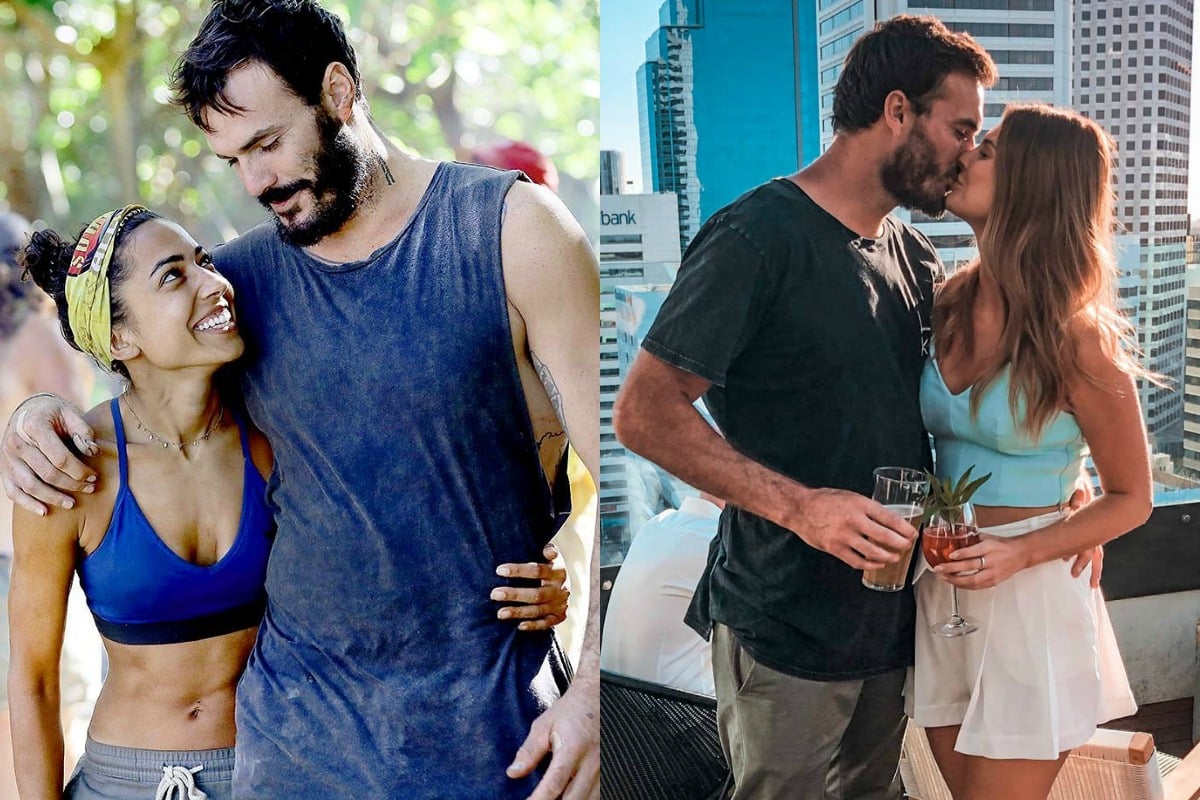 This month we met the 23 women vying for Locky Gilbert's heart on The Bachelor.

But they're not the only women who have formed a romantic connection with the forme﻿r Australian Survivor star.

Since being announced as the Bachelor, Locky's ex-girlfriends have spoken out about their past relationships with him.

Earlier this month, Locky addressed their comments in an interview with the Herald Sun, saying that he's not hiding from his past.

"I have got a past, I can't hide that, but they feel like they want to come out and give their story; all power to them," he continued.

Locky went on to say that he wishes his ex-girlfriends "all the best".

"I am sorry it didn't work out with me and them, but I have clearly moved on and maybe they haven't."

Here's everything we know about Locky's past relationships.

According to Woman's Day, Locky sent Perth mother-of-two Charlie Octavia a message asking her to "marry" him three weeks before going into lockdown for The Bachelor filming.

Screenshots of Instagram DMs between Locky and Charlie (which you can see here) show Locky saying he was "in love" with Charlie, who responds "back atcha".

Locky had told Charlie he needed to travel to Sydney for Survivor interviews, and only admitted it was for The Bachelor the night before his flight, asking Charlie to join the show as a contestant.

"How dare he think I'd leave my job, children and friends to follow him across the country to fight for his love, after he'd lied to me for so long," Charlie said.

She even shared images Locky had sent her of him in the mansion during filming.

"What hurts me deeply is we started seeing each other at the end of the worst year of my life and he encouraged me to be vulnerable with him, only to lie to me," she said.

"People need to know it's not OK to toy with people's emotions. I feel sorry for him. I believe he's empty and tries to fill the void with constant attention."

Locky and Brooke were nicknamed “king and queen” and “husband and wife” last season on Australian Survivor: All Stars.

“It was instant, like, you’re my person,” Brooke told TV Week when she met Locky for the first time.

“We’d chatted a bit through Instagram beforehand – nothing crazy, just talking about travel – but I thought he was cute too. As soon as we got there, we were joined at the hip,” she added.

“I trusted him from the start, and it was nice to have someone who made you feel good and not miss home so much.”

Throughout the show, Locky even built a “double bed out of bamboo” to share with Brooke.

Speaking to The Daily Telegraph in February, Brooke explained that she wasn’t expecting to start something with Locky on the show.

In the same interview, Locky also confirmed the pair’s romance on the show, adding that they kept PDA to a minimum.

“There was never too much PDA anywhere on the island, just hugs and some cuddles I guess. Remember we haven’t showered in ages,” he admitted.

“Even though Brooke seemed stunning every day.”

But their relationship didn't translate into the real world after filming wrapped.

“He’s in Perth and Bali, and I’m in Melbourne. His work means he’d want me to go to him, but I won’t leave my family and my dog. I’m also really focused on my career,” Brooke told TV Week in March.

“It’s a lot more difficult in the real world than it was out there.”

In early February, Locky told Perth Now he and Brooke still spoke “fairly often”, but he was definitely single.

However, Brooke told TV Week that a relationship between the pair wasn’t completely off the cards.

“I think he’s great. I won’t be having his child anytime soon,” she said.

“It’s still on the cards. We haven’t completely written it off, it’s just very complicated with the distance. It’s such an obstacle,” she said.

In March, Brook confirmed the rumours she had been "blindsided" by Locky's Bachelor announcement.

"Yes, I’m hurt and a little blindsided (excuse the pun) but I wish the best for Locky, I always will. (Secretly I hope he stacks it and splits his pants on day one)," she wrote on Instagram.

"I guess we had different things planned in our heads for what was to come over the next few months but you can’t be mad at someone for doing what they feel is best for them, even if it does sting a little."

While she hinted that the pair had planned a trip to Bali, she assured fans that there were no hard feelings on her side.

"In no way am I or is my Survivor experience defined by Locky or any other man. I was never hiding in his shadow in the game and I won’t be hiding in his shadow now. But I will always cherish those times we shared, it was an amazing life experience," she continued.
⁣
"Thank you all for your supportive messages I know I have bigger and better things in store (maybe not bigger actually, Locky is pretty bloody big) but definitely better. ⁣I hope he finds what he’s looking for.
⁣
"P.S It looks like I’m now going solo to Bali next month. Any takers?"

My side of our story. Yes, I’m hurt and a little blindsided (excuse the pun) but I wish the best for Locky, I always will 💕 (Secretly I hope he stacks it and splits his pants on day one) Haha.⁣ ⁣ I guess we had different things planned in our heads for what was to come over the next few months but you can’t be mad at someone for doing what they feel is best for them, even if it does sting a little. ⁣ ⁣ In no way am I or is my Survivor experience defined by Locky or any other man. I was never hiding in his shadow in the game and I won’t be hiding in his shadow now. But I will always cherish those times we shared, it was an amazing life experience.⁣ ⁣ Thank you all for your supportive messages ❤ I know I have bigger and better things in store (maybe not bigger actually, Locky is pretty bloody big) but definitely better. ⁣ ⁣ I hope he finds what he’s looking for🌹 ⁣ ⁣ P.S It looks like I’m now going solo to Bali next month. Any takers? #survivorau #survivor2020

Earlier this month, Locky shared his side of the story, saying that he didn't dump Brooke to go on the dating show.

"People were seeing Survivor and then hearing I’m doing The Bachelor when, in real time, there was six months from when I got off Survivor," he told TV Week.

"Everyone is saying, 'He dumped her for this show,'" he continued.

"But me and Brooke were never an item; we were never dating. We never even caught up outside from the show, so seeing that does rattle you."

It's a confusing comment to make, considering Brooke hinted that the pair had planned a trip to Bali earlier this year.

Before meeting Brooke on All Stars, Locky was in a long-term relationship with his ex-girlfriend Jordan Cayless, who appeared on season two of Love Island Australia.

The couple dated for several years before they split in early 2019.

On Love Island, Jordan was first linked to Eoghan Murphy, before having a brief relationship with Matthew Zukowski.

@mattzukowski may have won the bed battle, but will he win Jordan's heart? ❤️ #LoveIslandAU on tonight after The Block on @Channel9 #TeamJordan

While appearing on Australian Survivor in 2017, Locky said that Jordan was worried that he would cheat on her during the show.

"She's a little worried about me," Locky told The Kyle and Jackie O Show at the time.

"Girls are ruthless, they will straight up send nudes."

Locky also explained that the pair made a few rules before he appeared on the reality show.

"We watched a few Survivor seasons together and she was like, 'Oh no you're going to have to cuddle people,'" Locky said.

"We had a cuddling rule, like no touching at the waist and stuff."

In a recent interview with New Idea, Jodan said she doesn't think Locky will end up settling down after the show.

"I don’t believe it. Obviously you have genuine feelings and you’re in a bubble on the show, but no, I don’t think he will end up married with kids with this person on The Bachelor," she told the publication.

The former Love Island star also claimed that he only went on the show for publicity and to "lift up his business in Bali".

"I saw the ad where he says, 'I’m the type of guy to get down on one knee' and I thought, Yeah, you will – for the publicity and the ratings!"

She also claimed that Locky previously cheated on her during a trip overseas.﻿

“I was at home working on our business, and I got a message from a girl on Instagram saying she was so sorry to do this, but she thought that I should know that she went home with Locky that night,” said Jordan.

“I called her and spoke to her on the phone and she told me he was at a bar and she asked him several times throughout the night if he had a girlfriend and he said no. Locky still denies this. But they ended up going back to her place and they slept together twice.”

In a statement to the magazine, Locky explained that he had made a mistake in the past and has since learnt from the experience.

"Unfortunately, I made a mistake on a trip away that deeply hurt Jordan and our relationship," he told the publication.

"That was over a year ago and I’ve learnt a lot from it. The love I have for my chosen lady is something I’ve never felt before. It’s funny how things work out - it’s taken both of us to go on separate reality TV shows to find our happily ever after. I wish her all the best."

Jordan is now in a relationship with her fellow Love Island co-star, Gerard Majda.

Holly Newman also claimed that she was intimate with Locky a week before he was announced as this year's Bachelor.

In March, the model told Hit92.9’s Xavier Juelz & Pete that she hoped her romance with Locky would become more "exclusive" but it never happened. She later found out that Locky was the Bachelor on social media after he supposedly ghosted her.

The Bachelor continues Wednesday at 7:30pm on Channel 10.

This story was originally published on August 16 and has been updated.