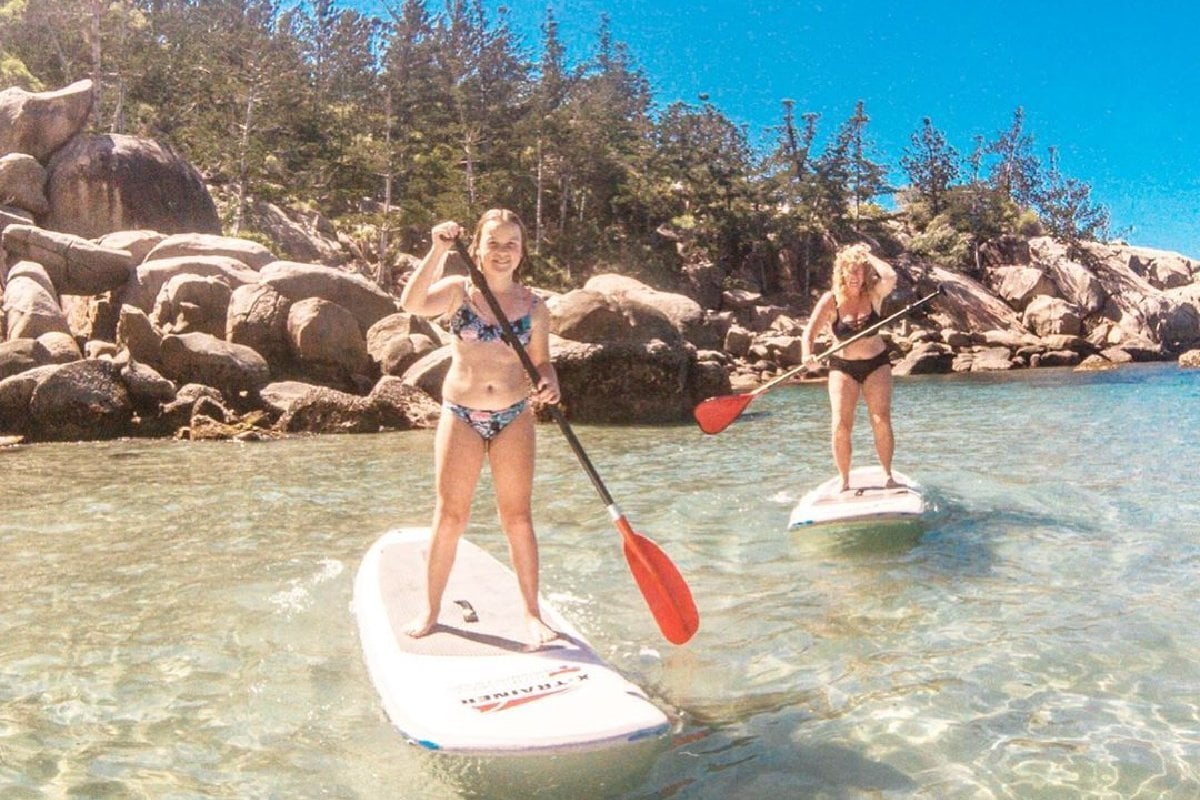 Six months ago my 10-year-old daughter and I were part-way into a year of travelling in Asia. Now we are lucky enough to be waiting out the pandemic on a tropical island in north Queensland.

We flew home from Japan in March - just days after our government asked Aussies to come back - into voluntary isolation, nowhere to live and, like everyone else, so much uncertainty. My income relies on tourism and travel, and when that stopped so did most of my money, apart from what I could withdraw from my superannuation or scrounge by pausing my mortgage repayments.

We isolated in a friends’ granny flat up the coast and then, as our house in Sydney was leased, moved into my parents’ home. It was tough, living back in 1989, and it didn’t improve as the pandemic dragged on way longer than any of us had expected.

Watch: Little daily rewards of self care. Post continues below.

We waited it out and when NSW was allowed to travel again we took off in a van to explore for a month. We bumbled on down the coast and after Emmie broke her arm at the Culburra skate park we turned west over the mountains and into Wiradjuri country, learning about Indigenous history, bushrangers, farming and wine. I pressed on and tried to ignore the scratching in my mind about where we would go when our road trip was over.

Freedom always has a price, and when we travel in Asia we can afford it. But we can’t afford it in Sydney. Rents, while lower due to the pandemic, were still high, and I panicked at locking myself into anything in the 'burbs without an income and not knowing what was ahead.

I narrowed down three criteria for a place to wait out the virus. It had to be warm, it had to be affordable, and it had to feel like an adventure.

And somehow, through a series of failed plans and direction-changing bumps from the universe, and in the sliver of time the Queensland border was open, we ended up on an island I had never heard of before.

The traditional custodians of this island, the Wulgurukaba people, call it Yunbenun, and we know it as Magnetic Island on the Great Barrier Reef in North Queensland. It’s a caring community of just 2000 locals, a 20-minute ferry ride from Townsville.

More than 75 per cent of the island is national park, chockers with brahminy kites, lorikeets, blue-winged kookaburras, wallabies and koalas, lizards and jumping bugs. Its 23 white sand beaches and bays are pristine, harbouring fish and tiny creatures in the coral and clear water. Palm trees are everywhere and hoop pines grow out of the cracks between huge white granite boulders.

Yes, there are stingers in summer, stingrays hiding in the sand, the odd croc swims on past, it’s a tiger shark breeding ground (don’t worry locals say, no one’s been taken in 60 years) and death adders hide in leaf litter. It’s the absolute best (and possibly the scariest) of Australia.

Hiking trails criss-cross the island, there’s an old World War II fort in the hills and most importantly good coffee at Scallywags Café just down the road from us. There’s no doubt we’re in Queensland - toad races are held every Wednesday at the Arcadia Hotel and thongs are accepted footwear. It’s a diverse and accepting community that trusts the island to sort out its people… I’ve heard that if it’s time to go, you’ll know it.

Many of the old-time locals, who call the island Maggie, have been here all their lives - like Izzy Bee who is the star of the new Netflix series, Izzy’s Koala World. Izzy has spent her life on the island, running and riding barefoot through the bush, rescuing and caring for injured and abandoned koalas.

She and her family may have found global fame these past few weeks, but life goes on. Yesterday we hired kayaks from Izzy’s dad Tim at his beach hire stand at Horseshoe Bay, and Izzy ran down to help him pull the doubles up onto the sand.

“Mum, there’s Izzy,” Emmie whispered as she watched her new role model in awe. I’m so happy she has a girl like Izzy to look up to.

I still feel the need to travel, but I’m loving being here. We’ve both made friends and Emmie has completely settled in. Her face glows with happiness and I think that’s mostly because of the school and the beautiful friends she has made.

Magnetic Island State School is Emmie's sixth school and it’s a dream come true. It’s small, it’s in bushland, it has a koala family in the trees and a swimming pool in the grounds. The most important form I had to complete at enrolment was the Whale Permission Form – locals phone the school when there are whales in the bay and the kids are walked over to the beach to spot them.

Indigenous people say this island has a strong female spirit and attracts women to it, many who (like us) never planned to come here or don’t even know how it happened. It’s said to be the pull of the island, and some never break free, or even want to.

I was told that long ago there was a big argument between the men and the women of an Aboriginal tribe on the mainland. The women decided to leave the men, and at low tide they took the children and walked over to Yunbenun where they lived in harmony and the island provided. Eventually the women and children returned to the mainland - the nightly screams of the curlews scared them - but the island retained its powerful female force.

I have met so many of these strong women here on the island. It’s a magical place and it feels right. For now, the island is our home.

Evie Farrell is usually travelling in Asia with her daughter. Follow her adventures on the island at www.mumpacktravel.com or on Instagram.