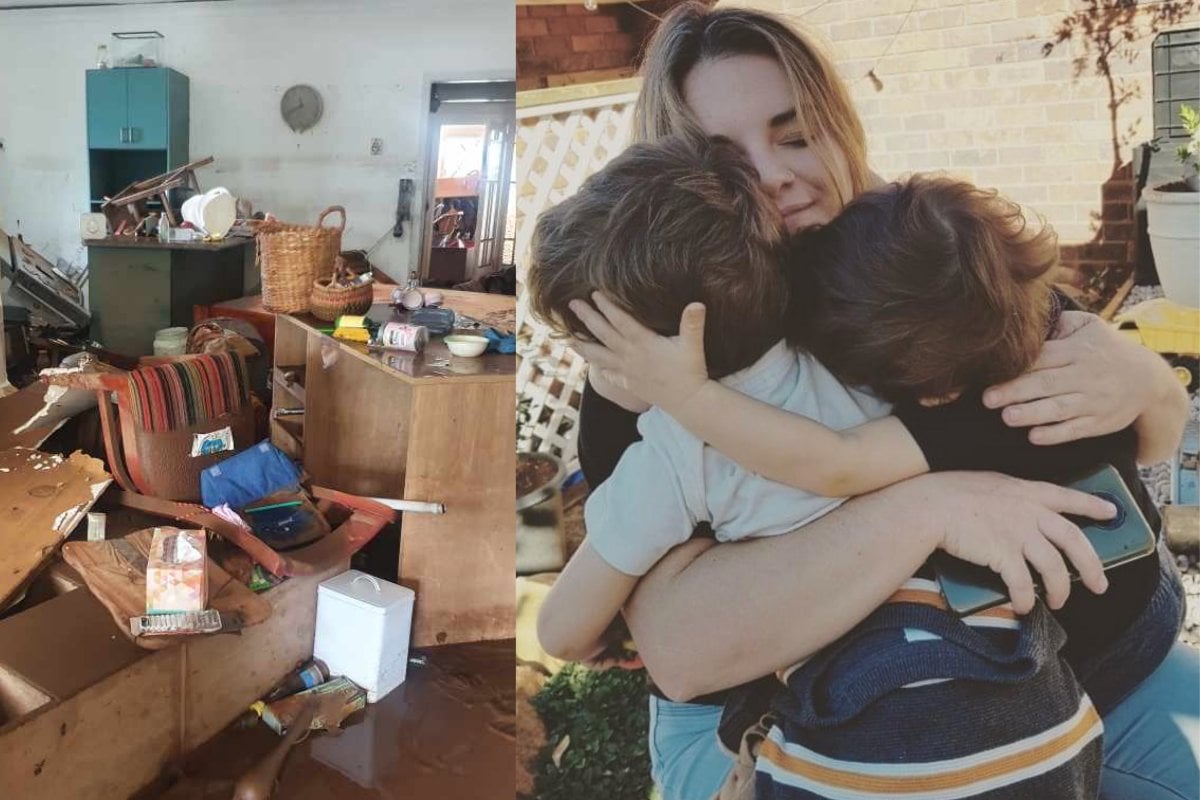 Leah, Vinnie and their two young boys have been through hell this past month.

When the floodwaters continually rose in Lismore, Leah and Vinnie were expecting some level of damage. But nothing could have prepared them for seeing their home submerged.

While their house went under water, Vinnie soon realised that without his help, many locals were going to lose their lives. And so he got in his tinny boat, and rescued as many people as he could find.

Four weeks on, Leah and Vinnie have lost just about all of their possessions in the floods.

A few days before the floodwaters came, Leah and Vinnie had begun preparing their home. If the coming floods were anything like the event in 1974, the couple knew their house would only just be unscathed. So they moved things from their backyard and put them on the upper deck - just in case. They also put a few keepsakes in the roof, not thinking twice about just how crucial that decision would be. A coffee machine, a computer and some baby books.

"We figured we would be stranded for a couple of days at worse," Leah told Mamamia. "We figured our house would be okay, we had the barbeque to cook on and we had bought plenty of food and water."

While Leah and her two boys were at her mother's place - which was safely away from the coming floodwaters - things began to escalate.

"I got a call from Vinnie saying 'the water is up to my knees in our house'. Vinnie and my stepdad were together at our place, and decided to get out and take shelter in the tinny. They soon realised no one was yet on the ground rescuing people and it was becoming scary."

Listen to The Quicky. "My babies were in the car:" escaping the flood zone. Post continues after audio.

In his boat, Vinnie was scouring the streets for people who needed help. He knew that if people were on their roof, they were going to be okay - it was the houses that had no one on the roof that worried him.

"He was listening out for the neighbours, looking inside what was left of the house's windows and yelling if anyone needed help. I know from what he has told me that he was horrified by some of the things he saw. Given what he went through, he is dealing with a fair bit of posttraumatic stress."

But what Vinnie was able to do is quite incredible, saving 50 people from floodwaters - including an 85-year-old man up to his neck in water who Vinnie heard crying out for help, and a woman on dialysis. At this time, Leah was also receiving calls from loved ones in Lismore, including a girlfriend who with her three-year-old, was stuck at home.

"I told her to try and get on her roof, but she said she couldn't find a way. It was a very emotionally hysterical conversation. Really upsetting," Leah said.

In the days after the floodwaters receded, things felt apocalyptic for Lismore and its neighbouring towns.

"It's surreal. Sometimes I think I'll wake up and realise this was all a bad dream. It's just putting one foot in front of the other. I remember getting out of my car and the pain of seeing my house for the first time, it pulled me to the ground, and I was down on my knees and just bawling," Leah said to Mamamia. 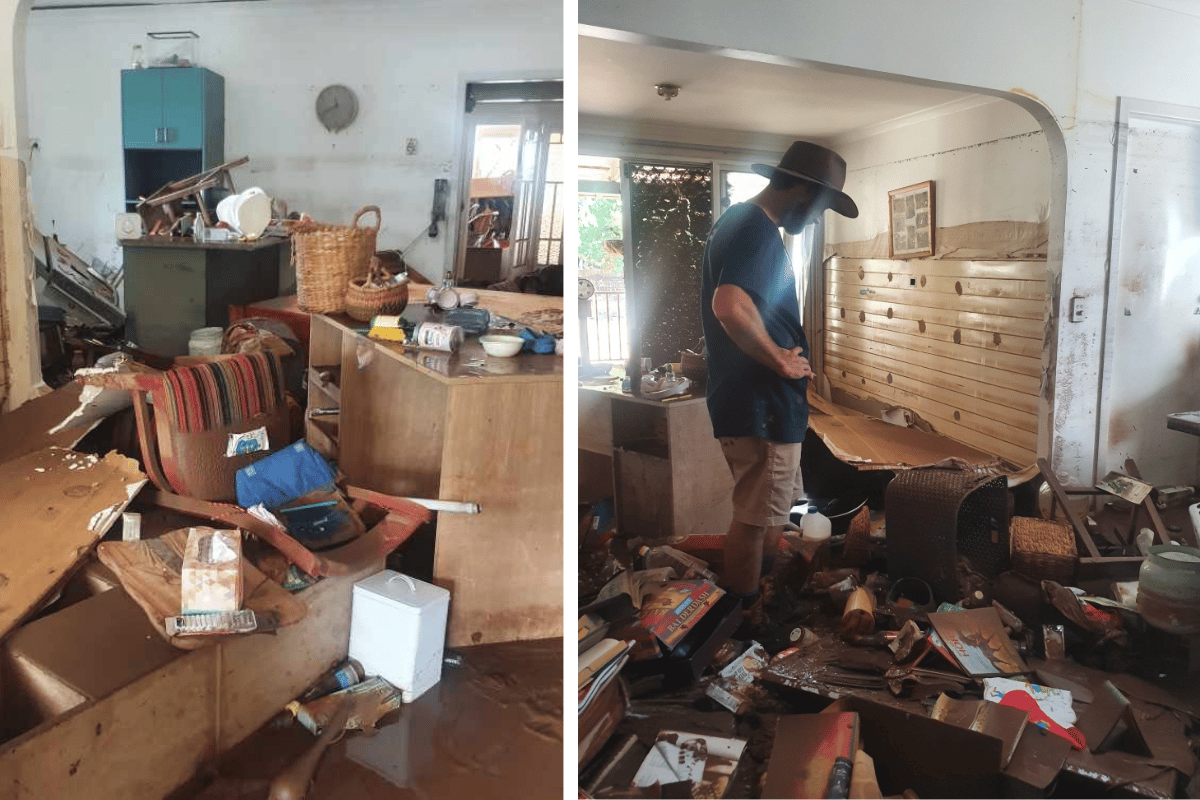 Leah and Vinnie's house in the aftermath of the floods. Image: Supplied.

"The front windows were gone, there was three inches of mud everywhere, our TV was in the kitchen, the bed frame in the hallway, the cupboard in the bathroom. The fridge had floated up into the wall of the roof and then fallen back down, so there was food strewn everywhere. Family heirlooms had been washed away from the home completely. It was heartbreaking."

The clean up then commenced, civilians using wheelbarrows to collect all of their damaged belongings and dump them onto their kerbside for everyone to see. It was an experience and sight that made Leah feel "really exposed and vulnerable".

"I was probably six months into starting it, and a lot has been affected. The paperwork, my kit, the business computer, a couple of saddles all gone. All the grooming equipment too. I can't operate at the moment."

Trying to deal with the aftermath is now centre of mind for Leah. Ripping up floors, removing dry walls, constantly cleaning and trying to mop away the thick mud. 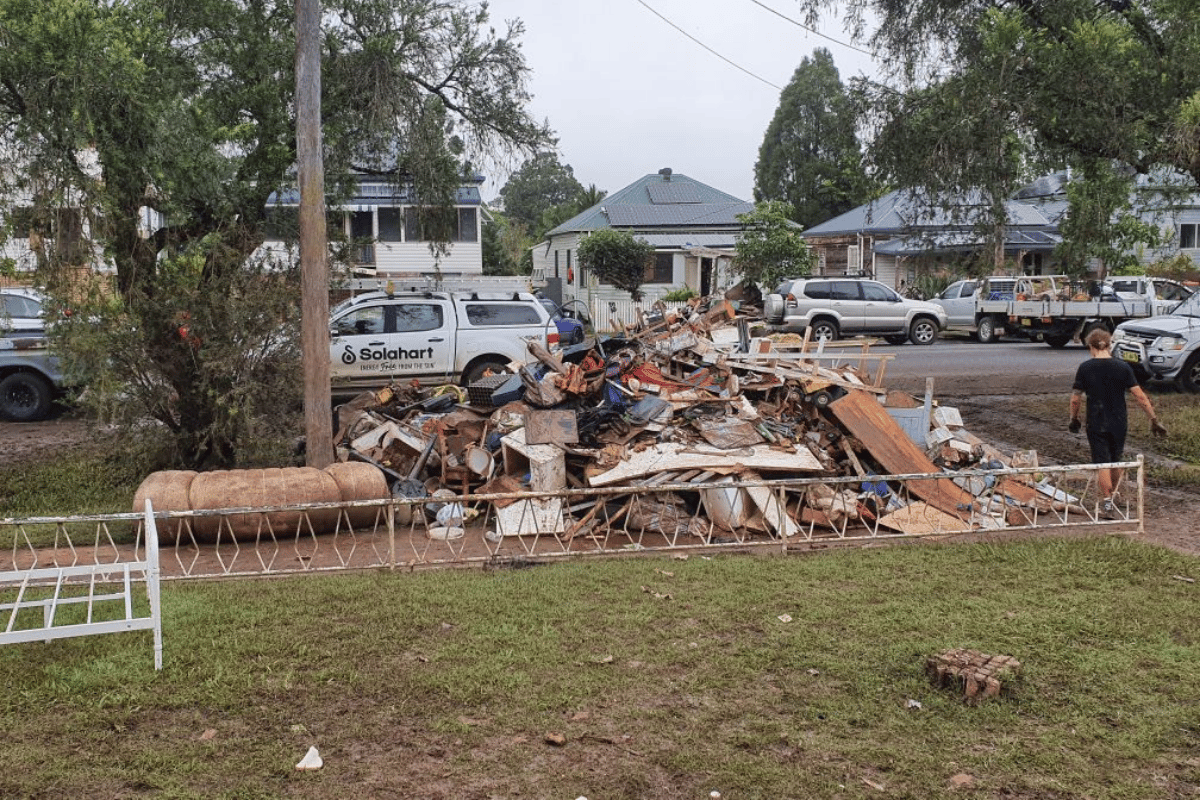 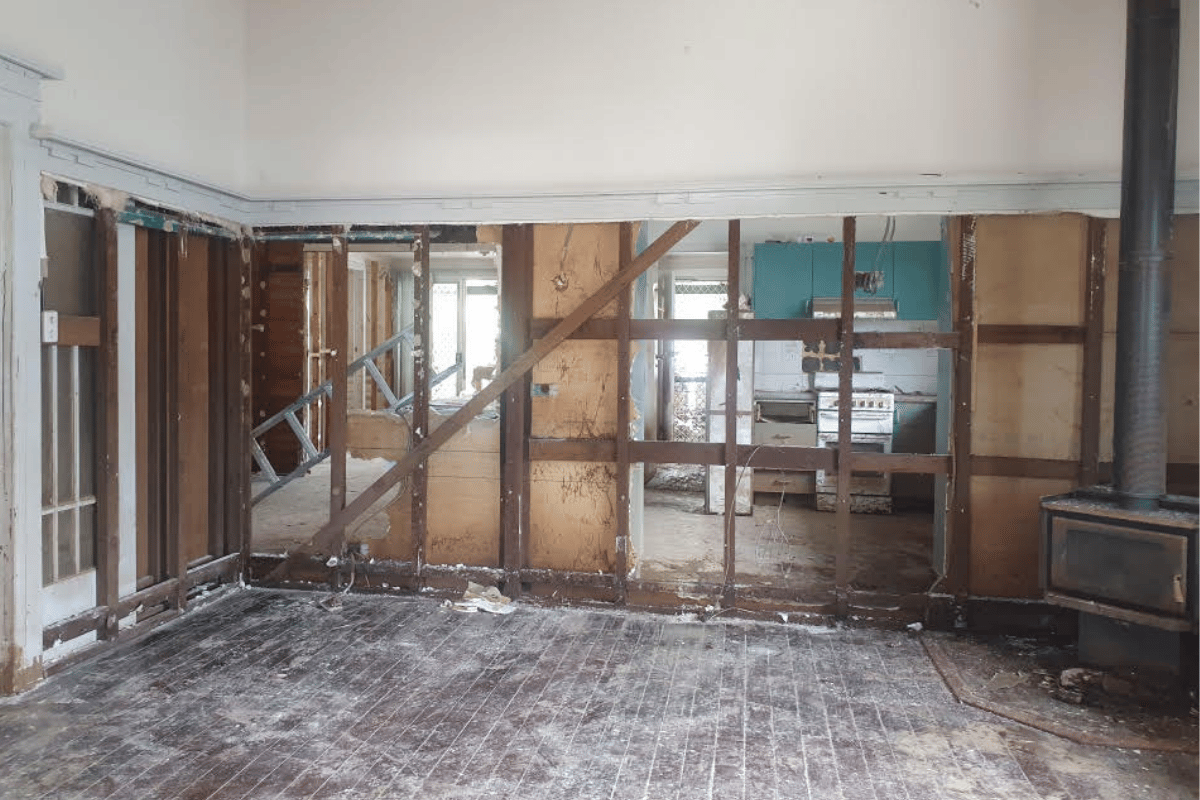 Although Leah and her family are lucky not to have lost their lives in the floods, it is still incredibly sad to fathom all they have in fact lost.

Their five-year-old son is most upset about losing his homework folder, after just starting kindergarten.

For their three-year-old boy, he is struggling to understand what has happened. He'll ask: "Did my bed float away in the flood, mum? Where did my toys go? Why is there no food in the cupboards?"

As for Leah, it's the tangible memories, like her children's first drawings and locks of hair she'd kept after their first haircuts. Or a special recipe book featuring their grandma's chocolate cake recipe.

"We tried to explain to the boys that our house became full of water just like everyone else's in town. We told them we were going to lose a lot of items, but that everyone was safe. And if they really missed a particular thing, we could always buy another one in the future. I also told them just how proud they should be of their dad," Leah shared.

Understandably, Leah has been struggling. And she's trying her best to "hold myself together for the boys".

"I want them to see the good parts of this, everyone working together, rather than focusing on the bad. I have cried in front of them. It's hard to keep it fully together. One of my son's had his birthday just two days before the floods, and luckily we had kept his presents at his grandma's so that was a comfort to know. We're trying to focus on the small good things."

And to top it all off, Leah said she is currently experiencing mum guilt.

"I just feel so bad as a mum for being absent, like I've had to go and do these things and being away from my kids right now breaks my heart. I know I need to be there to support them, but I just need to get other things done. I'm trying not to be too hard on myself. But you can see the impact that all of this is having on everyone," she said to Mamamia. 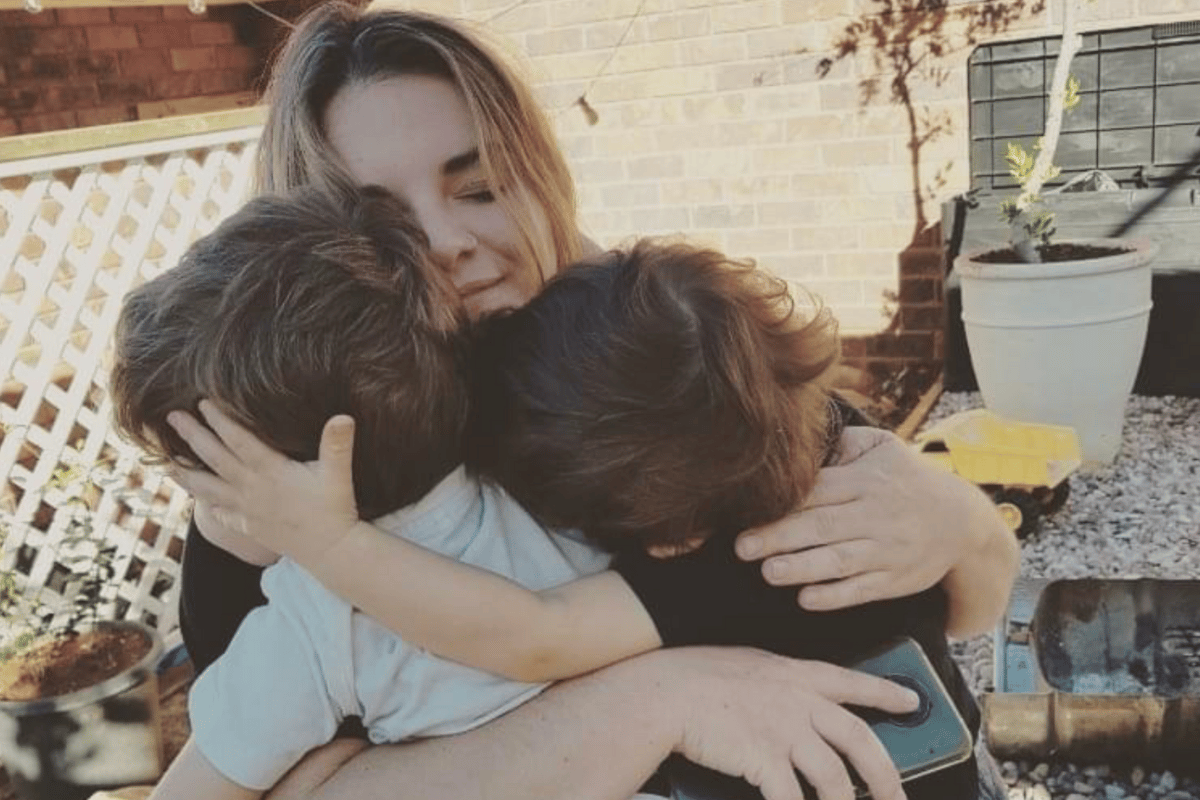 Leah and her boys. Image: Supplied. 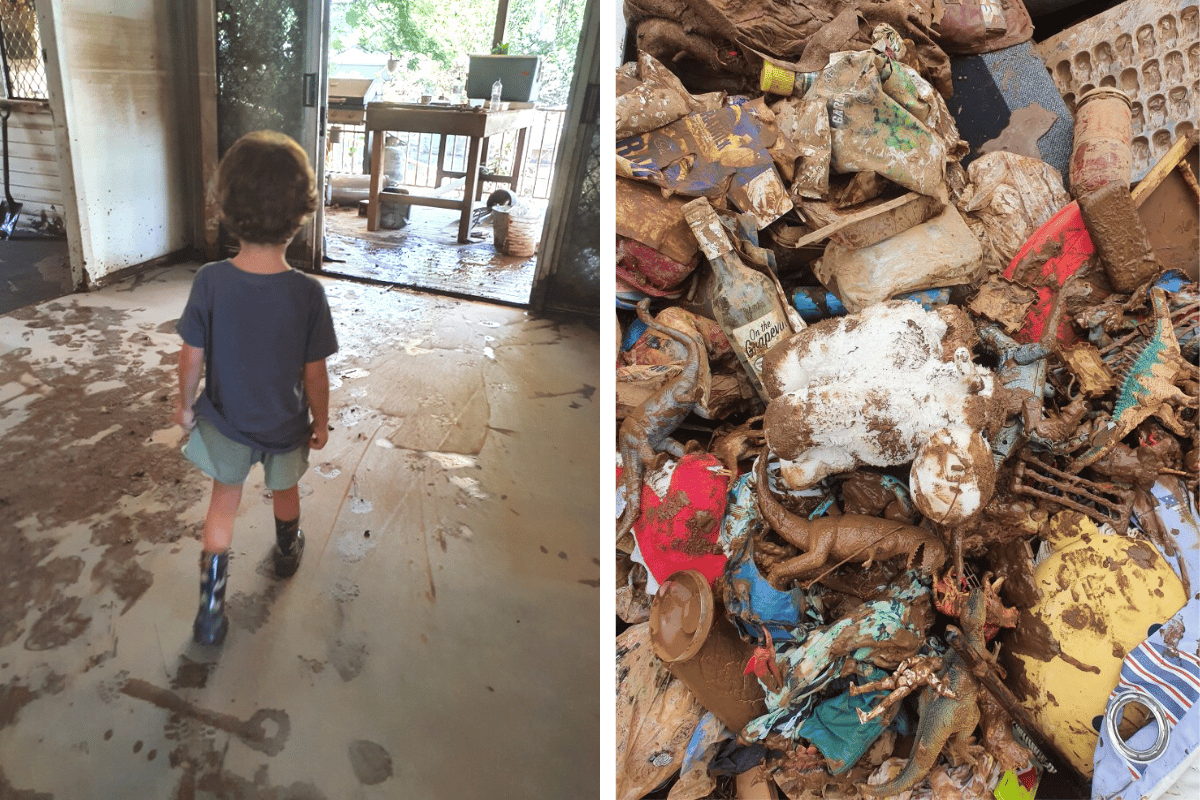 One of Leah's boys and his ruined toys. Image: Supplied.

It is comforting to see just how strong the community of Lismore is.

"The community spirit seems a bit better this week than it was last week. We are really fortunate that one of our friend's family have a bus that they have converted into a house for us to stay in while we figure out how to fix our own place. So we will be staying in the bus," Leah said.

It's also good to hear stories of locals offering what they can, including local businessman Darren Nelson from Solace Sleep bringing a convoy of trucks to one flood-affected town, handing out new mattresses to those in need. As he put it: "When you have the opportunity to help, you should. It's that simple."

But there are also feelings of overwhelm and frustration too.

"It feels like a waiting game. Waiting for supplies. Support. Services too," Leah noted. "There's also looting happening, and what you do have left you obviously want to keep safe but it's hard to when my front door doesn't even shut. I also have no front windows, so you do feel vulnerable in that way."

She continued: "We're still living out of plastic containers. I just can't believe we're four weeks into this. It's a long haul to come, with most people saying it's going to take 18 months to fix our homes given the lack of supplies and tradies available. I'm assuming it will take longer than that. Just to even try and look forward to six months from now is overwhelming - emotionally and financially."

Leah also hopes plenty of mental health resources and support will be available in the months to come for this community. But as for now, her plan is to spend time with her family and just take one day at a time - because goodness knows that's a task in itself right now.

If you would like to help Leah and her family rebuild their lives, their loved ones have created a verified GoFundMe to help support them. You can donate here. 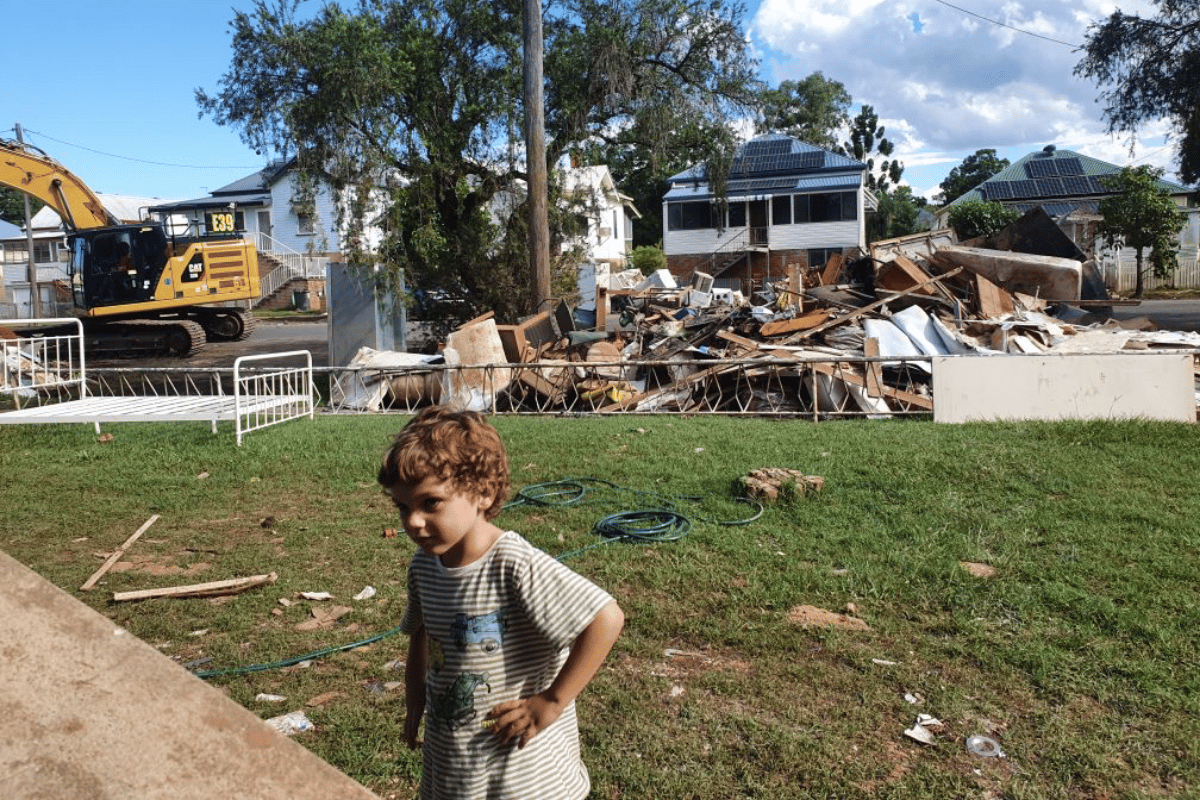