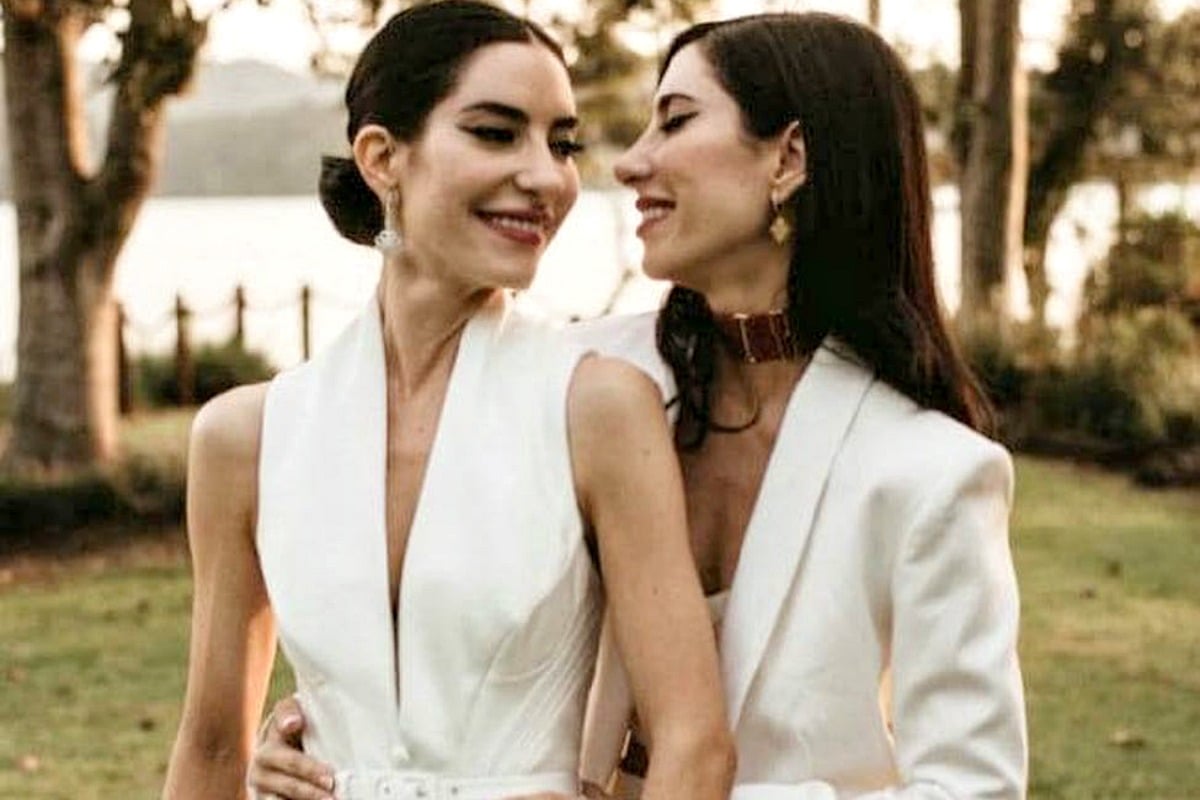 All the details of Lisa Origliasso’s glamorous big day have been released and we are officially obsessed with every aspect of it.

Yes – one half of The Veronicas (AKA band that soundtracked our tween years) tied the knot earlier this month, and her wedding was every bit the vintage-lover’s dream.

As featured in Vogue Brides Australia, the ceremony was held at a small chapel on the Sunshine Coast of Queensland, The Chapel Montville, with a reception at Secrets On The Lake, a sprawling, leafy property, which set the scene perfectly for self-confessed nature junkies Lisa and her actor husband Logan Huffman.

The love we were surrounded with on our wedding day can only be described as heavenly. The truest blessing in all it’s glory. Beautiful souls from both our worlds, colliding & forming friendships & memories to last a life time. I don’t know what we did to deserve to be surrounded by so much love on such a day… but I whole heartedly feel like the luckiest woman in the universe. Every day with you is the grandest love story of all time… you are pure magic @loganhuffman77 X Thank you to all the incredible souls who helped make this a day that surpassed our wildest dreams. Story & photos are now live on @vogueaustralia ???? @joeywillisweddings

And while we’re pretty much just here for the juicy deets on the fashion (and also the reception food), Lisa’s heartfelt words on her first date with Logan are very romantic (and kinda sound like they could be Veronicas’ lyrics…).

“From the moment I looked into his big blue eyes, it was like seeing my future for the first time,” she told Vogue Australia.

“I vividly remember saying to my sister the morning after meeting Logan, that I had this overwhelming feeling I would marry him one day,” the newlywed recalled. “She was shocked considering I had always said I would never get married.”

Fast-forward two years and the other half of the band, her twin sister Jess, stood by her side at the altar in a white Lillian Khallouf suit.

The groom’s suit and top hat mirrored the day’s aesthetic – both were vintage made in 1918.

Lisa previously revealed that her dress – a full-skirted J’Aton Couture gown – was selected with a controversial bride in mind: Wallis Simpson.

Wallis is famously the woman Edward VIII gave up his British royal throne for when they wed in 1937. And while it’s a romantic tale, she wasn’t the most well-liked woman at the time

However, the bride added that the gown was also inspired by everything – from her heritage to the Victorian era.

The result, she said, was that the “dress became something that not even I could have imagined in my wildest dreams”.

“For my wedding dress I wanted to embody the romance period of the Victorian era, yet still have the forward graces of the ’30s and ’40s,” the 33-year-old said.

“Inspired by my heritage from the old countries, my French and Italian ancestries played a big part in choosing the fabrics and intricate details of my veil and accessories.”

Lisa completed the look with vintage leather gloves and a headpiece made of “intricate leather flowers”, and Charlotte Olympia shoes.

Her reception dress was a dusty pink hand-beaded gown, also by J’Aton.

It doesn’t seem to be inspired by any controversial royals, but it is extremely pretty:

????…And so we loved harder than we ever thought we could & danced the night away… @loganhuffman77 ???? I love you I love you I love you, darling. You are the greatest love story ever told x Repost: @vogueaustralia For our second dress @jatoncouture @fleureganstyle we wanted to create something captivating that embodied the divine feminine, spring time- when new love and life is flourishing, a celebration of culture, spirituality, all people and traditions coming together. An embodiment of love. The colour reflects a dusk sunset & pink wildflowers were worn in my hair to reflect our love of nature. Every single bead was hand stitched, a meditative process no doubt from the makers, it was truly a sight to behold- a glittering work of art & an honour to wear dancing the night away with the love of my life. ???? @joeywillisweddings @joeywillis

One of our favourite details of the day is how they sourced their wedding car.

“The night before the wedding we were wandering on Main Street, Montville, and Logan spotted a parked 1957 Chevrolet, two-toned in white and red,” Lisa told Vogue.

“Logan’s family car growing up was a red 1956 Chevy and being a part of the tri-five years, it was perfect. We left a note on the windscreen and crossed our fingers. By the next morning he texted me back and we had the wheels of our dreams. The driver was in town for his son’s wedding the day before – leaving that afternoon. I guess it was meant to be.”

BUT WHAT ABOUT THE FOOD?

They ate a rustic feast of salads, meats and grazing tables by caterer Sarah Glover –  a “wild adventure chef”, who cooks over an open fire with fresh, locally sourced produce.

OH, and the cake topper was from the groom’s grandparents’ 1959 wedding.