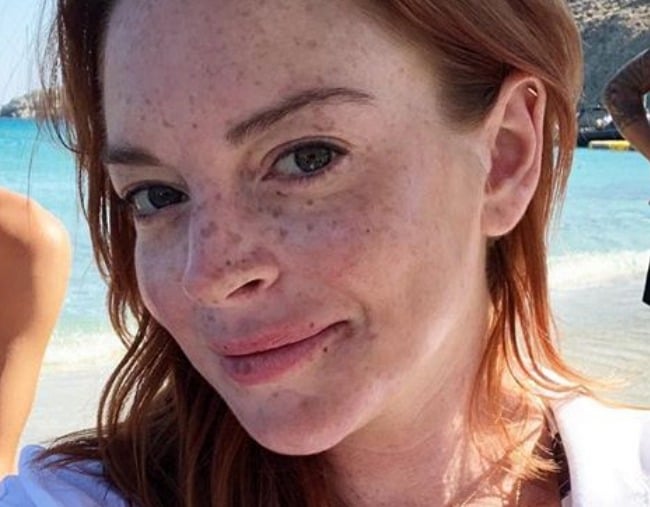 In 2004, Lindsay Lohan was one of the most recognised stars in Hollywood.

She had risen to fame playing twins, Annie and Hallie, in the 1998 remake of The Parent Trap. In 2004, she starred in the cult favourite, Mean Girls.

Now, in 2018, she’s an internet meme and she seems oddly proud of her new form of fame.

She’s almost made the whole “she’s kooky/she might need an intervention” theme her own personal brand.

Here are just some of the bizarre things Lohan has done in the last decade:

1. She speaks in different… accents.

Over the last couple of years, LiLo has been introducing some new accents into her repertoire.

She likes to speak in a Mediterranean accent and also sometimes an Arabic accent.

There’s no logical explanation for this… but she has been spending a lot of time in Greece opening nightclubs, and she’s also been working with Syrian refugees in Turkey.

2. She really worked her ankle bracelets.

After spending 90 days in jail for possession of cocaine and DUIs, Lohan was fitted with a SCRAM alcohol monitoring bracelet.

3. She lived at the Chateau Marmont for weeks.

After one of her stints in rehab, Lohan checked into the Chateau Marmont and just… stayed there.

4. She was on a TV show about being a hoarder.

In 2010, there was a whole TV show dedicated to the fact that Lohan is a secret hoarder.

During the three-part series, Lindsay Lohan: Secret Celebrity Hoarder, Lohan’s condo was given a makeover by professional organiser, Linda Koopersmith.

What she found in there was… terrifying.

5. She told people to stop being upset about Hurricane Sandy.

Remember when Lindsay Lohan was a meteorologist and told us to pray away Hurricane Sandy? pic.twitter.com/BTI1qS8oSF

Before Hurricane Sandy devastated the US in 2012, Lohan told people to stop making such a big deal about it.

“WHY is everyone in SUCH a panic about hurricane? STOP projecting negativity! Think positive and pray for peace!” she wrote on Twitter at the time.

So in 2009, Lohan told a BBC documentary she had personally saved 40 Indian children from a sweatshop.

“Over 40 children saved so far… Within one day’s work… This is what life is about… Doing THIS is a life worth living,” she later wrote on Twitter.

However, the charity involved later said Lohan wasn’t even in the country at the time of the raid.

7. She made a list of all the famous men she’d slept with.

While making her reality TV show, Lohan wrote a list of all the famous men she had slept with.

8. She called the police because she’d lost her phone.

In 2009, Lohan called the NYPD because she’d left her phone in a deli.

9. She got super involved in Brexit.

Despite having nothing to do with the UK, Lohan had a lot of opinions about Brexit.

According to GQ, she tweeted constantly about the vote, before suddenly deleting all of said tweets. ¯\_(ツ)_/¯

Last month, Lohan was filmed dancing at a club in Mykonos, Greece.

She instantly became a meme.

She then shared that meme on Instagram with the hashtag #DoTheLilo.

Over the weekend, Lohan filmed herself trying to “rescue” the children of a Syrian refugee family.

In the video, Lohan chases the family down the street, speaking to them in a variety of accents before trying to grab one of the children.

The mother then punches Lohan in the face as the family flees.

I think we need to put “Syrian refugees”, in quotation marks. The people may have been homeless, but is there any actual evidence of them being Syrian? Or refugees?