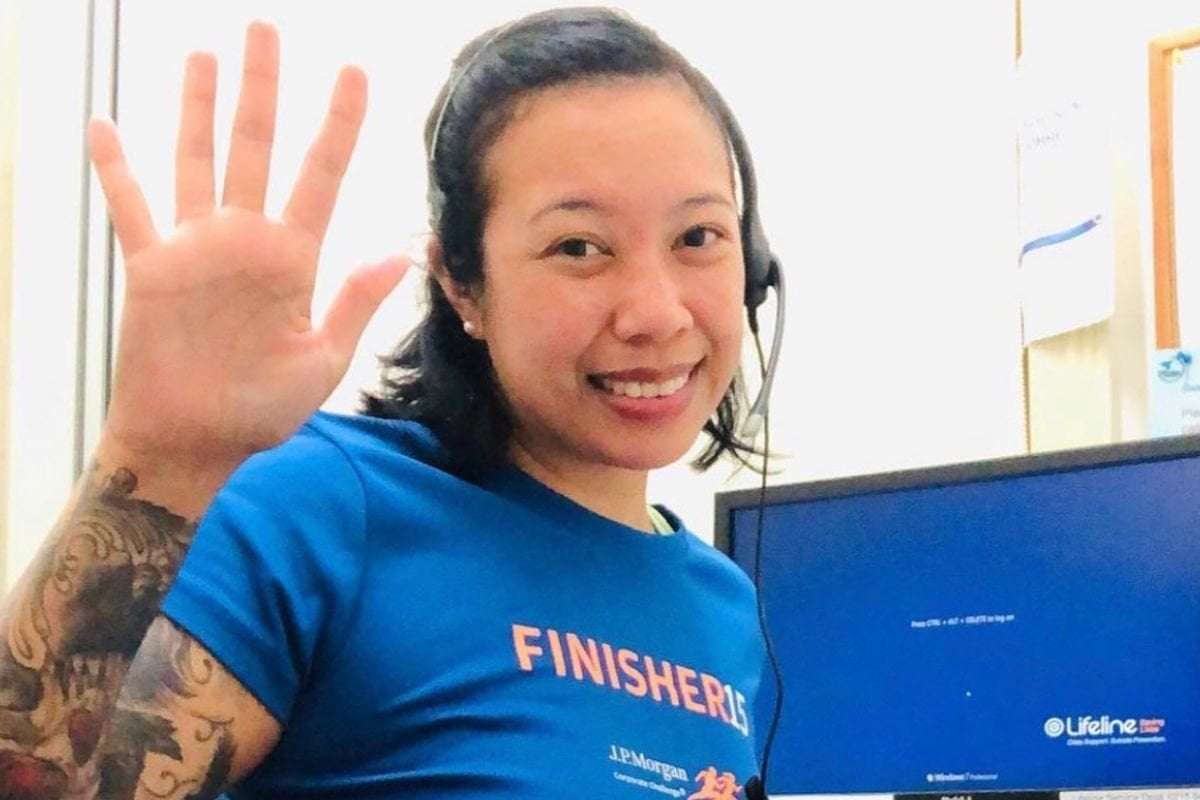 Crisis support hotline Lifeline Australia is right now receiving the highest volume of calls ever experienced in its 58-year history.

But Leola Small, who has been a volunteer for four years, hasn't noticed. Because during a shift at Lifeline the phone is always running off the hook.

The thing she has noticed however, is a difference in the content of those calls.

What happens when you call Lifeline? Post continues after video.

"Usually, people will call about one specific trauma. But now they call about one thing, and then the phone call goes through many different traumas. It's like all of the traumas have come to the surface, and everything hurts at the same time. Which is horrible," she told Mamamia.

As Australia battles the Delta variant, and millions of people are put into and out of snap lockdowns, our fatigued population is struggling.

Last Thursday, Lifeline recorded 3,505 calls - their highest daily number. During the pandemic there's been a 40 per cent increase in the number of people reaching out, and yet despite the influx in calls, statistics show that suicide rates remain stable.

According to data from the Australian Institute of Health and Welfare, preliminary figures from QLD, NSW and Victoria show there hasn't been any evidence of any increase in 2020 or 2021 relative to previous years.

Leola says that's encouraging. She thinks it's because even though people are struggling more than ever they are reaching out for help, with the pandemic helping to lessen the stigma surrounding mental health.

The 39-year-old, who works a corporate day job, gives up two hours of her weekend every week to the Lifeline phones. 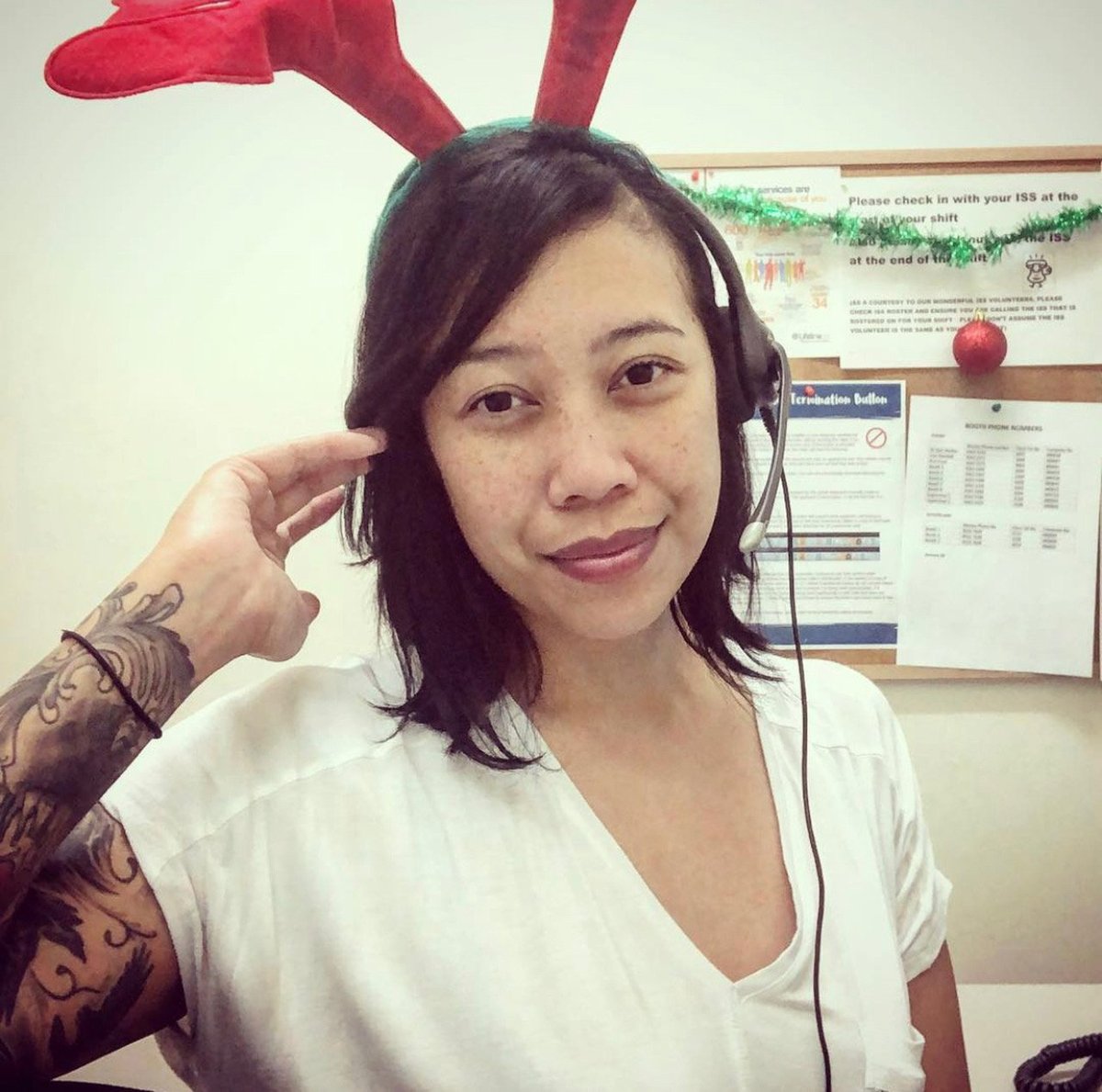 Leola tries to work every public holiday she can. It's often when people are struggling the most. Image: Supplied.

She does it for two reasons; her stepson's best friend's death by suicide at the age of 16, and her own struggles with mental health after surviving a brain aneurysm in her late 20s. As she tells Mamamia, "a near death experience changes you and I really wanted to have more meaning in my life."

Leola underwent six months of rigorous training to become a volunteer, and there's a huge cross-section of people who sign up; psychologists in training, retirees, and people like her who have had life altering experiences.

Over the years she has spoken to Australians dealing with every struggle imaginable, from crippling loneliness to domestic violence. She has even had a pedophile call her from inside prison. No matter who it is, Leola's main goal once she picks up the phone, is to make sure the person on the other end isn't in imminent danger.

"It's about putting biases aside and listening to people's distress. You get a lot of people complaining about racial issues, or being sexist. And because I'm a woman, they start to take it out on me. They hurl abuse and you know, we just kind of have to take it."

But it's the calls in-between the horrible ones that Leola stays for.

"There are those calls where people call and they're in complete distress - inconsolable. And then by the end I've got them laughing and smiling. Those do make the difference."

For Leola, it's also about the invaluable perspective manning the phones at Lifeline gives her.

"We complain about our lives, but I've heard some stories that you just can't make up. You know, people living horror lives," she told Mamamia.

Since the pandemic hit, Lifeline has experienced an increase in first-time callers. People who call and preface their chat with, "I've never done anything like this before."

"There's a lot of people that are under a huge amount of distress right now," said Leola. "So they get on the phone, they start talking about COVID, or they start talking about lockdown and then they just start to talk about everything else, you know, things that happened to them years ago that they haven't gotten over. And that's what lockdown does, it exacerbates other problems that you would normally have the resilience and the tolerance to deal with."

With 3,505 calls made to Lifeline yesterday – another record-breaking high – more Australians than ever are in need of support. Help fund more crisis supporters so we can continue to be there for those in their darkest hours.

Leola has noticed an increase in people asking her for more psychological advice during the pandemic. She has to gently remind the caller that she's not a therapist or a counsellor. They aren't there to give advice, they are there to listen. But they are trained to listen to clues in a person's story in order to help them reach out to the people already in their lives. Or to reconnect with the processes or rituals they have available to them.

"If I answer the phone, I will be like, 'hi this is Lifeline, how can we help?' You guide the call. So it's kind of whatever you want to talk about."

They don't know who you are, and you don't know who they are. They only know which state your calling from. But if you're in danger, they will alert their supervisor who will call emergency services. As Leola explains, if you call Lifeline, at some point during the call you will be asked if you are considering suicide. They are a crisis hotline, so their main objective is to make sure you are safe in that moment.

But Leola wants to make something clear - you don't have to only call Lifeline if things are that dire.

"If the thought of calling Lifeline is something that's crossing your mind, then just do it. You won't lose anything by doing it. All the calls are anonymous, we are holding your respect and your dignity at the highest level...it's nothing to be scared of. Everyone was a first caller at one point in time, and there's no problem too big or too small. I think that needs to be said, because I think there are some people who think Lifeline is only for crisis and only for suicide. And while that is true, 70 percent of our calls are from loneliness, and are from people that don't have anyone else to talk to [about] mental health issues," she told Mamamia.

Leola and the hundreds of other volunteers who happily give up their weeknights, weekends and days off to listen, are waiting by the phone.

Reply
Upvote
People who volunteer on crisis lines are amazing. Not only do they donate their time to extensive training and then ongoing shifts. They also make a financial contribution towards their training costs. Not everyone can do it but those that can deserve more recognition than what they get. Thank you Leola, your dedication and selflessness is hugely appreciated.