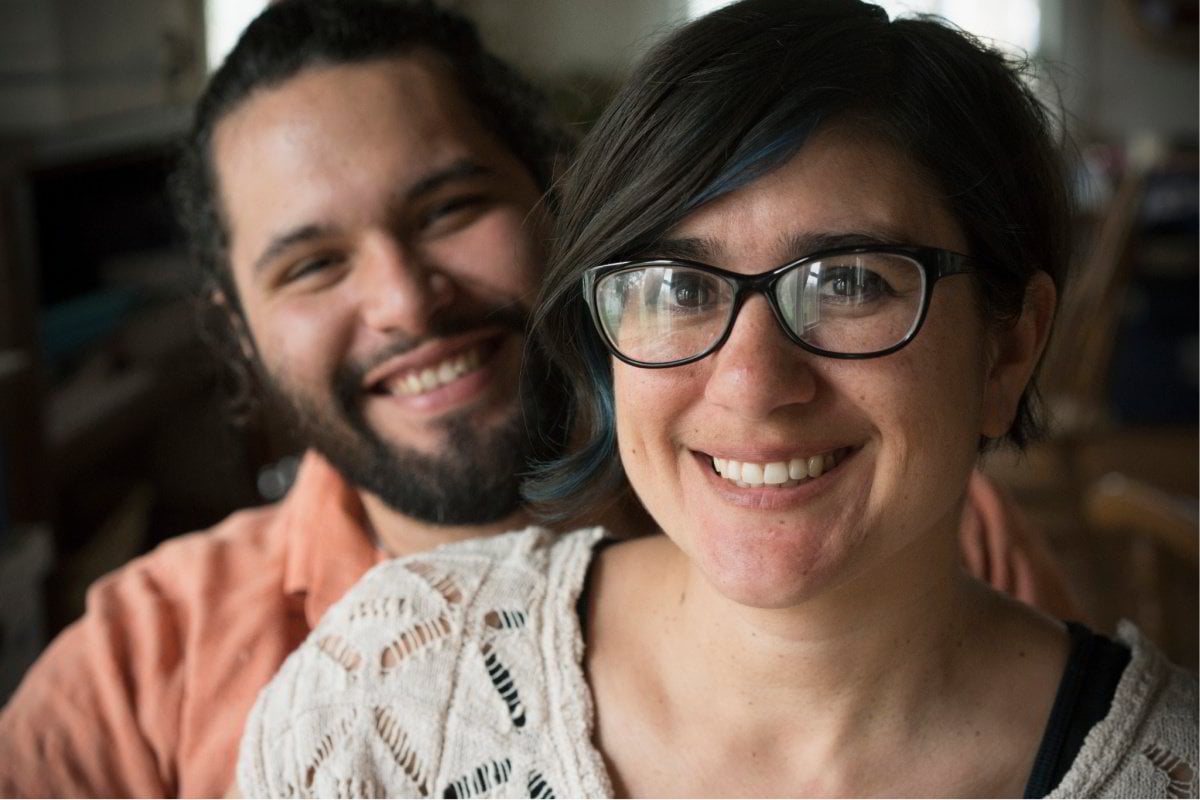 “That guy is in the news again today,” I told my husband.

I told him and then we both sat back and thought about the insanity of embezzling close to a million dollars from your father-in-law’s company.

“How’d you meet him again?” my husband asked.

“Through a friend,” I said.

Side note... this is what it's like cooking when you're single vs cooking in a relationship. Post continues below.

That’s not true since I’d never consider my ex a “friend”, but when I first started seeing his bandmate appearing in the news for such a high-level crime, I couldn’t help telling my husband that I’d known him.

I just chose, purposefully, to leave out his connection to my ex. I don’t want to talk about my ex, and neither does my husband want to hear about him.

This would easily be deemed a “white lie,” which Bella DePaulo and Deborah Kashy have argued can be seen as “compassionate offerings” that serve to maintain a relationship.

Trust, honesty, and vulnerability are crucial to maintaining a healthy relationship, but there are some LITTLE lies that can be okay to tell.

1. Making them feel better over something insignificant.

I’m currently five months pregnant, and like many pregnant women, I’ve been a bit insecure about how my body has changed.

I asked my husband what he thought. “You’re still a very attractive woman,” he told me.

“But I don’t look like how I did before.”

“Well, your boobs and your butt have gotten bigger.”

“I mean, just a little…” he backtracked.

If someone is preparing for a job interview and puts on a bad outfit, tell them. If they make a one-time mistake or it’s something that really wouldn’t hurt them if you fudged (like in the case above), go ahead and lie.

2. Not telling them every time someone flirted with you.

If something truly meant nothing, it’s not a big deal if you choose not to tell your partner. But you have to be clear with yourself whether something is or isn’t a big deal.

The cashier who hit on me that I rolled my eyes at? Don’t need to tell my partner about that one. But if it was an ex who ran into me at the shop? That would be something I should probably tell my partner.

If you would want to be told, then you should probably tell your partner.

I personally don’t need to know about all the women that may hit on my husband because he’s a good-looking guy and I know it happens, but if it was one of his exes trying to mack on him, I’d like to know.

For Christmas last year, my husband bought me a necklace with my children’s names on it. It was sweet and super thoughtful, but it was white gold when I normally wear yellow gold and the style was a little… cheesy.

My husband doesn’t pay attention to jewellery, let alone the kinds I wear, but he still tried and the thought counts. Did I tell him I would have preferred yellow gold and maybe a different style? Definitely not. I told him, “This is so sweet! Thank you so much!”

It’s even something I wear because I know he appreciates it when I do.

4. Being nice about one-off situations.

We all sometimes have to do things we don’t like just because we’re in a relationship. We have to spend hours at their mother’s house, which reeks of mothballs, or we attend a concert for a band we can’t stand. Announcing how much you hate it is never the best move.

Instead, you might fib and say, “I’m having fun” or “This is fine.” In these instances, you’re just trying to make the best of a not-so-great situation while also not guilting your partner.

5. Hiding something in the beginning.

Intimacy can take time to build, and you may need to wait to have that before you share something with a new partner.

I’m a recovering drug addict with over 12 years clean, which means I don’t drink or use any mind-altering substances. While on a first date, someone might ask me, “Why don’t you drink?” and I’d usually respond with, “I just prefer not to” and leave it at that.

If I got to know them more ﻿later, then I might tell them about my history of abuse and what eventually pushed me to get and stay clean.

Your romantic partner has to accept you as you truly are, but that can take time to work up to and you never want to rush it.

6. Sexting them that you’re wearing something sexy when you’re… not.

I never hang around wearing something sexy. Never. As soon as I get home from work, no matter what time it is, I put on pyjamas and slippers. They aren’t even remotely sexy (think oversized t-shirt and pants), but they are my comfortable clothes and they signal to me that my workday is done.

Before my partner and I lived together or now whenever we have to be apart, we occasionally sext. I’d say something like, “I’m wearing that red number you like so much,” when I’d actually be wearing a t-shirt stained with the spaghetti I’d eaten for dinner.

It’s okay to fudge when you’re co-creating a fantasy with your partner because you’re only adding to the experience instead of doing it just for your own gain.

As most relationships progress, there will be fewer occasions for little lies, but it’s all about the individual relationship and the agreements made within it.

﻿Try to follow the golden rule (“If you would want to be told, then you should probably tell your partner”) as much as possible, and if you’re feeling guilty about not saying something, go ahead and share.

Tara Blair Ball is a fr﻿eelance writer and author of the memoir, The Beginning of the End. Check out her website here or find her on Twitter: @tarablairball.﻿﻿