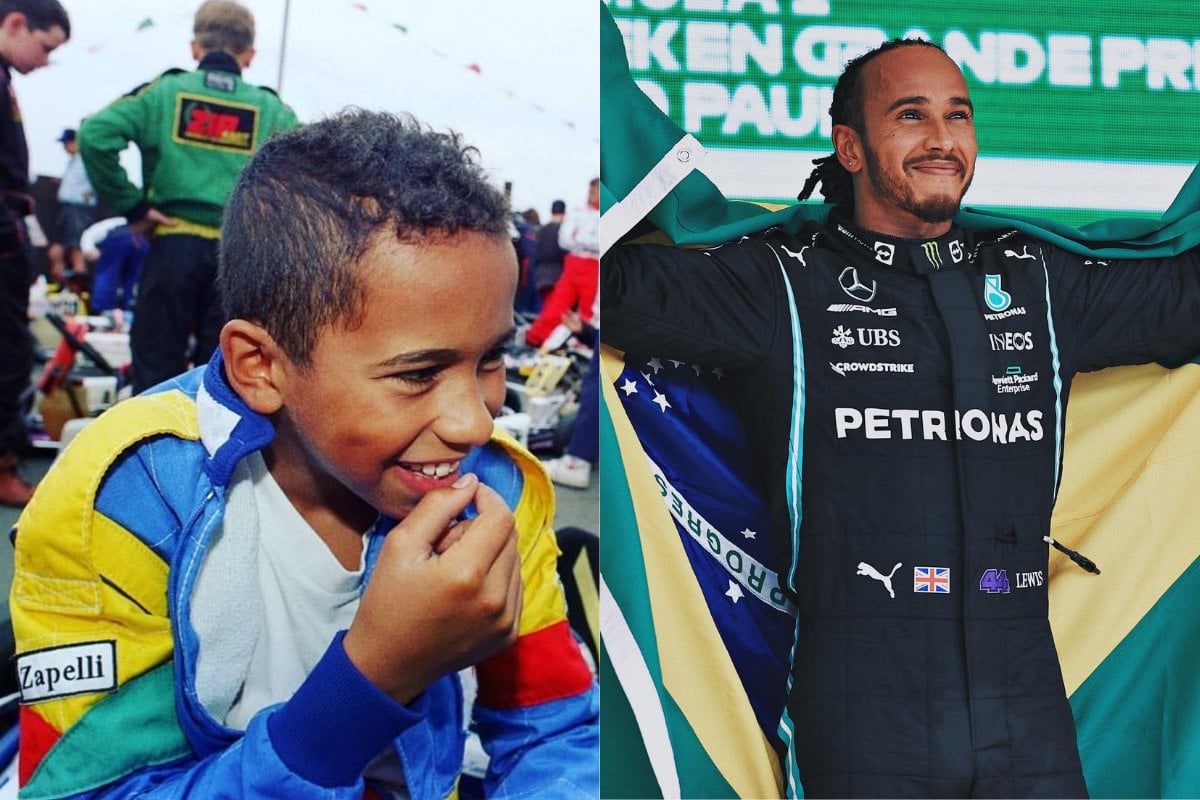 Lewis Hamilton is the best Formula 1 driver the world has ever seen.

On November 15, 2020, the British racing driver, who drives for Mercedes, won his seventh world championship at the Turkish Grand Prix. In doing so, he equalled the record set by Michael Schumacher set 16 years earlier - a record that many believed no one would ever get close to.

Watch the trailer for season four of the F1 Netflix docu-reality series, Drive to Survive. Post continues after video.

Hamilton was born just north of London, England, in the quiet town Stevenage, to a white mother, Carmen, and Grenadian-British father, Anthony.

His parents separated when he was two, and he lived with his mother until he was 12 before moving in with his father, step-mother and half brother.

Hamilton was a shy kid. He struggled at school with bullies and undiagnosed dyslexia, and took up sports to help cope with it.

"As a kid I remember just staying quiet about [the bullying] because I didn’t feel anyone really understood," the 37-year-old told The Guardian in 2021.

"I did boxing because I needed to channel the pain," he said. "I did karate because I was being beaten up and I wanted to be able to defend myself."

He then found a love for racing.

"I got in a car and I was the only kid of colour on the track. And I’d be getting pushed around. But then I could always turn their energy against them," he told the publication.

"I’d out-trick them, outsmart them, outwit them and beat them, and that, for me, was more powerful than any words."

Unlike most other Formula 1 drivers, Hamilton's family didn't come from money.

His father, who was also his mentor and manager, had to re-mortgage his house and spend all of his savings to get Hamilton through just one year of go-karting.

In 1995, the 10-year-old kart champion picked up two trophies at a motor sport awards ceremony in London.

At the event he approached Ron Dennis, the boss of the McLaren Mercedes Formula 1 team and said: 'Hello Mr. Dennis, I'm Lewis Hamilton and one day I'd like to race for your team.'

Three years later, 13-year-old Hamilton joined McLaren’s young driver programme, and by 22 he made his Formula 1 debut as a McLaren driver.

He won his first world championship in his second season in 2008, making him the then-youngest champion in the history of the sport.

"There's chatter in the paddock, he’s won a race every season since 2007, and there’s actually a chance he might not win a race this year," The Times' Formula 1 correspondent, Rebecca Clancy told the Track Torque podcast.

According to Clancy, the problem isn't Hamilton, it's his car.

"Mercedes are really struggling to work out what’s wrong with their car.

"They are having issues with porpoising, which is basically the car bouncing up and down, and the only way to fix it is to raise the car height, which would slow the car down and that's a big problem," she said.

"They are miles off Ferrari and Red Bull, we’re talking a second, which is huge in Formula One terms."

His most recent race before the 2022 Australian Grand Prix, held April 8-10 in Melbourne, was in Saudi Arabia. Hamilton finished 10th.

He's admitted he's "struggling mentally and emotionally" because of it.

"It has been such a tough year already with everything that is happening around us," Hamilton wrote on Instagram. "Hard some days to stay positive."

"I have struggled mentally and emotionally for a long time, to keep going is a constant effort but we have to keep fighting. We have so much to do and to achieve."

Hamilton has also been an advocate of diversifying Formula 1, a sport which is predominately exclusive to white people. He is currently the first and only Black F1 driver in the sport's history.

"When I saw what happened to George (Floyd), it brought out all the emotions and experiences from my childhood," Hamilton says in an interview with Wired.

In 2020, the racing driver facilitated Black Lives Matter's involvement in F1, as he led the taking the knee before every race and established his own commission to diversify the sport.

Outside of racing, Hamilton is quite a private person.

While he is currently believed to be single, the British racing driver was most notably known for dating the lead singer of The Pussycat Dolls, Nicole Scherzinger, for eight years between 2007 and 2015.

Earlier this year, the racing driver announced he would be changing his name to include his mum's last name, Larbalestier.

"I don’t really fully understand the whole idea that when people get married the woman loses her name and I really want my mum’s name to continue on with the Hamilton name," he said during an on-stage interview at the Expo world fair in Dubai.

When asked when he would make the change, Hamilton said: "Hopefully soon. We are working on it."

Speaking to GP Fans, the racing driver said he "still has a bit to go" but doesn't plan on being in the sport past 40.

"I honestly haven’t thought about it [but I] don’t plan on being here past that age," the 37-year-old said.

"Hopefully, I have some other fun things to get on with."