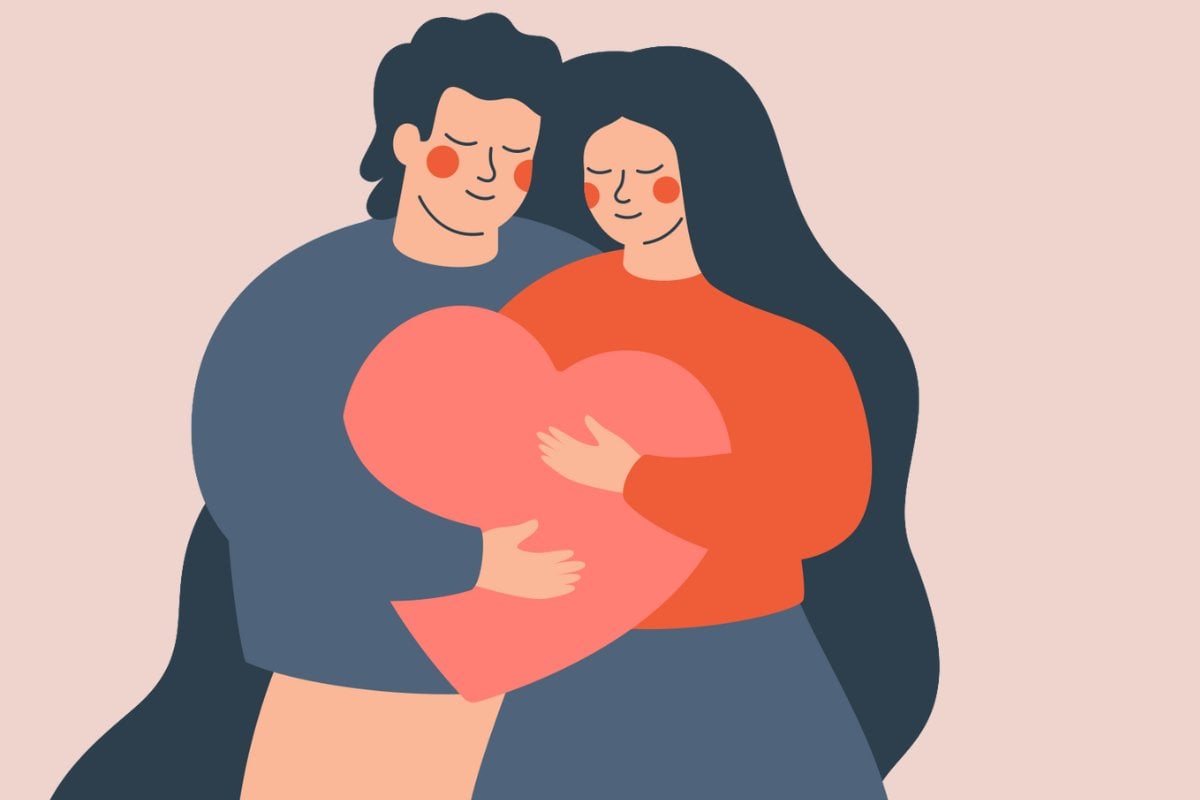 Having recently clocked up 10 years of marriage, it has, like a lot of milestones in life, been an opportunity to reflect on all that's happened during that time.

For my husband and I, it's been an eventful decade to say the least. We've had three kids, moved cities, started new jobs and both turned 40.

Along the way we've learnt a thing or two about parenting, patience, pandemics and more.

While you're here, watch the Mamamia team asks women the question how did you know your partner was the one? Post continues after video.

Though I'm by no means an expert, I'd like to think I've learnt a couple of things about marriage too, and it goes a little something like this.

While data from the Australian Bureau of Statistics indicates that marriage rates have been steadily decreasing since the seventies, weddings still play a large part in our culture. You only have to look at the fanfare still made over celebrity weddings and the prominence of wedding-related content across social feeds to understand this.

As a society, we love a good wedding, but a good wedding obviously doesn't make a good marriage. When you stop and think about it, it's kind of odd that we put so much time, effort and expense into planning and creating this one day rather than putting the same amount of consideration into planning the actual marriage.

Don't get me wrong, I'm not down on weddings, I'm just suggesting that perhaps there's a better investment to be made in making sure you're clear on each other's values and that your values and expectations of married life are aligned, and mostly you want the same things out of life.

From my experience, these are the things you return to time and time again throughout your marriage – not the wedding stationery or bonbonniere or which particular shade of dusty pink the bridesmaids wore.

2. Changing your name is a big deal.

These days it might seem like an outdated concept but studies show that 80 per cent of women in Australia take their husband's surname following marriage. Be that as it may, it's not always an easy thing to do. I don't just mean from an administrative point of view – although yes, it's very much the nightmare you think it's going to be – but more in terms of how it impacts your identity.

I struggled with the decision to change my name, much more than I expected to. I'd always assumed I'd take my partner's name, probably out of tradition/cultural conditioning and largely just wanting to present to the world as one united front.

While I had a decent job when I got married, I didn't feel like I'd made any kind of 'name for myself' career-wise, which I justified as another reason that it didn't really matter if I changed my name.

However, when the time came to do it, there was a small sense of grief at losing a part of my identity that had always been so prominent. For 30 years I was known by my maiden name and then in a matter of months (ha! if you're lucky with ALL those forms), I legally had a new identity. Ten years on, I'm used to my married name, but it took a while to get my head and signature around.

3. You're both going to change and that's okay.

Different surname aside, I'm not the same person who stood at the altar 10 years ago and neither is my husband. He's got a grey-flecked beard and my body's been forever altered by motherhood, but of course it's a lot more than physical changes that occur over time.

Ideals, tastes, attitudes and outlooks on life also morph and evolve with the years, sometimes dramatically so. I know it sounds a bit corny, but I think so long as you're changing and growing and openly sharing where you're at with each other that's all that really matters.

4. It takes more than just the two of you.

It's too much to expect one person to deliver on all your emotional, physical, intellectual and spiritual needs. You have to have other people in your life that can fulfil at least some of these areas.

For me personally, that's my girlfriends. I'm fortunate enough to have a circle of phenomenal women around me that are an amazing source of support outside my relationship. There are some things I know they'll just get, like mastitis, laser hair removal, JLo, and the list goes on. I think my husband will agree that I do us both a favour by taking such matters to them instead of him.

Similarly, I adore catch ups with friends and believe that spending time apart is a healthy aspect of any relationship. Whether that's with family, friends, colleagues or even via a therapist, doing something outside of your relationship gives you something to bring back to the relationship, which always helps to re-energise things.

Despite what Instagram, #couplegoals, and Ryan Reynolds and Blake Lively may have you believe, there's no such thing as a "perfect relationship". How could it be when its main components are two imperfect individuals?

And even when you find someone who you firmly believe is totally and utterly your perfect match, there's still going to be moments along the way when it feels anything but. Things can't always be rosy. Even the most solid of couplings need to work on something.

A big part of long-term relationships is just navigating the ebb and flow that inevitably comes with it. Unsurprisingly, good communication often helps you get through the patchy periods because just like nothing's perfect, no one's a mind reader either.

6. You fall back on your friendship more often than you think.

Say the kids are sick and you haven't had a proper night’s sleep in over a week. Or maybe you're going through your own health issues or work challenges while the demands of life keep piling up around you.

Whatever the circumstance, when you find yourself in the trenches together, it's often aspects of your friendship that pull you through. Fundamentals like trust, loyalty, empathy, dependability, and – in my opinion, one of the most important – being able to laugh about things together only continue to grow in significance as the years pass.

The same rings true in less tumultuous times too. Interesting conversations, thoughtful gestures, shared jokes that nobody but the two of you understands – these are all cultivated through a firm foundation of friendship.

I’m only one decade into my marriage but I imagine friendship plays an even bigger part in sustaining relationships with time.

When you've been together a long time, it can be easy to take things for granted. I know chores are boring to do let alone read about, but the fact is they come up in married life A LOT and it's easy to get into patterns of behaviour around them.

For example, you might become so accustomed to someone else taking out the garbage or taking care of the laundry for you that eventually you might not even notice these things happening. This can of course lead to resentment, which nobody wants. I think it's safe to say though that everyone wants to feel valued and appreciated.

One way to do this is by attempting to regularly take note and thank your partner for the things they do for you, from making you a cup of tea to making you feel safe and loved.

8. There'll be one conversation on repeat until you either die or divorce.

What do you want to eat? It seems like a simple, even thoughtful, question, but just you wait until the same person has asked you it more than a thousand times.

Suffice to say, there's no escaping this discussion. Ever. It will become a permanent fixture in your life like coffee and showering and although you know it's coming at some point almost every day, no one will ever seem sufficiently prepared to answer it. "Oh, I don't know, what do you feel like?" you'll at some stage hear yourself or your partner saying and on and on and on it will go.

9. The more intentional you are, the better it is.

A marriage is not a set and forget kinda situation. Like most things in life, you get out of it what you put into it. Just because you live together and see each other all the time doesn't mean you're actually seeing each other.

I've found that over time and especially if there are children or hectic work schedules involved you have to actively find ways to connect and cultivate intimacy. Otherwise, it can be really easy to overlook and you also risk becoming glorified roommates.

Obviously, it's not always possible, like when you've got a newborn and you're both in total survival mode, but it doesn't have to be anything extravagant.

Even just carving out some time at home to have a glass of wine or dinner together away from the kids, work and other distractions can be helpful in creating a sense of closeness.

The biggest thing I've probably learned about marriage is that there's always going to be something more to learn – about my husband, myself, the way we parent together and the way we operate as a couple.

In discussing long-term relationships on his On Purpose podcast Jay Shetty says, "You have to learn about this person again and again and again. You're not going to get to know a new person if you're committed to a person in love, but you can always know them deeper".

So, as my husband and I move through different iterations and eras of our respective lives and relationship together, it's nice to know there'll always be more to discover because really, isn't that half the fun?

What are some things you've learned about marriage or long-term relationships? Share your thoughts in the comments below.

Emily McGrorey is a full-time reader, part-time procrastinator, freelance writer, casual Pilates student and aspiring author. You can follow her on Instagram here.