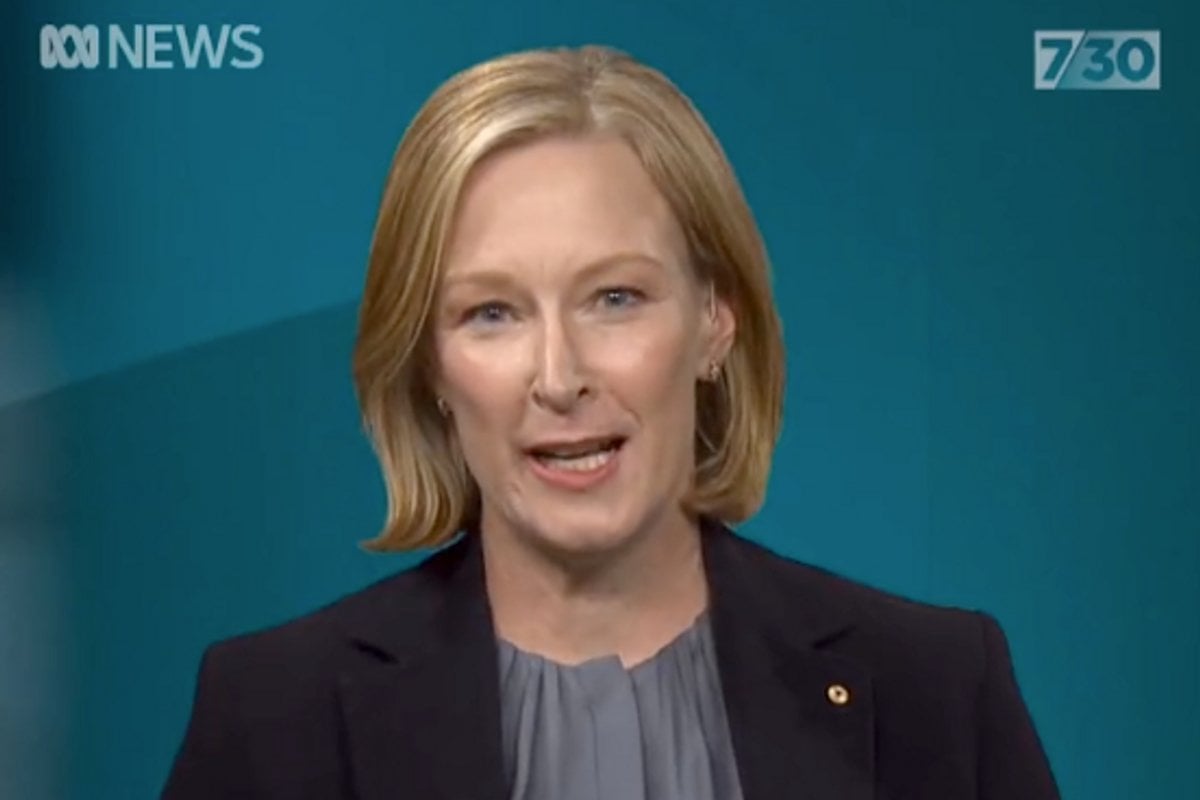 Leigh Sales tonight announced she would step down from her role as host of ABC’s 7:30.

"Anchoring a nightly news show has been a marathon ...and it has been a daily sprint," she told viewers. "There's nothing wrong, other than I just feel it being the time to pass on the baton to the next runner in the race."

"I've always approached this job with one goal: to ask frank questions of people in power without fear or favour. I've tried to shut down wafflers, call out bulls**t, hold powerful people to account, expose lies, incompetence and exaggeration. I have truly tried my absolute hardest. It has been the most amazing job."

She said she will continue her post until after the election, but noted that she is looking forward to being home with her sons, aged eight and 10. "They want me home before 8:30pm," she said.

You can see her full statement from the 7.30 Report, right here:

Sales' career is far from over. She closed her statement by saying, "I'm looking forward to seeing what I do next at the ABC," noting that she won't be disappearing from our screens completely.

In fact, we can look forward to her coverage of the Federal Election.

Watch: In the lift with Leigh Sales. Post continues after video.

As a journalist and author, Leigh Sales has established a space for herself in Australian media that historically, has been almost exclusively occupied by men.

She's the most acclaimed political interviewer in the country, who is trusted with asking any subject the tough questions - often the very same questions the Australian public are yelling at the television from their lounge rooms.

Simply put, she is incredible at her job.

Given the news that Leigh has decided to step down and retire from her role on ABC's 7:30 report, we look back at some of her career highlights: which is very hard to narrow down considering the breadth of her work.

When Hillary Clinton gave her final town hall interview as US Secretary of State, it was Leigh who sat opposite her and asked her what she planned to do next.

In the same year that she interviewed Clinton, Leigh was then chosen to interview his Holiness the 14th Dalai Lama, where he shared his thoughts on Tibetan autonomy.

Leigh has also been praised for grilling Prime Minister Scott Morrison on countless issues from the economy, COVID, his ability as a leader, childcare funding, sexual harassment and assault allegations within Parliament, bushfires: the list goes on.

In the wake of Bob Hawke's death, it was Leigh that widow Blanche d'Alpuget trusted with her first interview since the passing.

Who could forget her incredible interview with former Prime Minister Malcolm Turnbull in 2020, where he opened up about experiencing depression, his honest reflections on the Liberal Party, and the fact he believes Tony Abbott leadership (or lack thereof) was "erratic and flaky".

It isn't just political figures that Leigh has interviewed. Writing for Mamamia, Leigh said: "I took fifteen dollars out of my money box, went to the record store at Westfield Strathpine and bought Sergeant Pepper’s Lonely Hearts Club Band on cassette and then went home and dubbed the other three albums onto cassettes too. They hardly left my tape recorder for years," she said.

So in 2017, when Leigh interviewed Paul McCartney, it was a full-circle moment.

"He is used to being the one who has to put people at ease and he did it effortlessly with warmth and charm. He is the most influential musician of the past hundred years and he acted as if he were a bloke at the pub. It was one of the greatest experiences of my life."

Every day Australians have also trusted Leigh with her stories, including those who feel comfortable sharing the worst experiences of their lives with the respected journalist. Who could forget her incredible book Any Ordinary Day, which shared the stories of people like Walter Mikac, whose wife and two girls were killed in the Port Arthur massacre.

As Leigh noted in her goodbye speech on Thursday night:

"The celebrities come and go but you never forget people like Matthew Low, whose wife was killed in the Dreamworld rollercoaster accident: who somehow found the strength down the track to do an interview to try and ensure no other family would have to go through what his did."

She concluded: "Every time you interview somebody whose life has been devastated, you feel terrified by what life has dished up to them and incredibly humbled by how they've met that with strength, clarity and dignity. You just don't forget it."

Thank you Leigh for your work and asking the tough questions. We will miss you.

Reply
Upvote
I got criticised for being a stay at home for 7 years .  My husband had 2 jobs . It's our business what we do
N
nessie 3 months ago