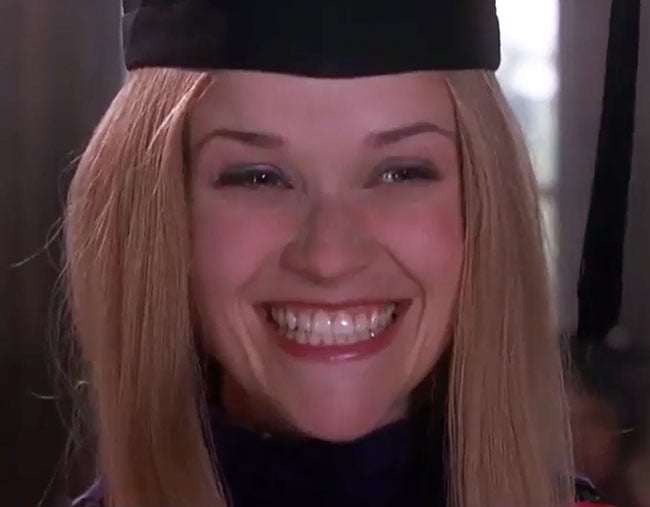 It’s the scene that makes Legally Blonde one of the most memorable films of the early noughties: Elle Woods, who originally attended Harvard Law School in an effort to win back her boyfriend, stands before her graduating class to tell them to “always have faith” in themselves.

But in a new interview with Entertainment Weekly, the film’s co-writer Karen McCullah confessed that the moving graduation scene wasn’t a part of the plan.

“Originally it ended at the courthouse right after the trial,” she told EW.

“Everyone was congratulating Elle, and Emmett came up and gave her a big kiss. Then there was a tag where it was a year in the future and she and Vivian, who was now blonde, had started the Blonde Legal Defense Fund and they were in the quad handing out pamphlets.”

Watch the trailer for Legally Blonde:

But test audiences weren’t convinced by the ending, who said the kiss between Elle and Emmett made the whole movie feel “like a rom-com”.

“They knew that this was not a movie about a girl getting a guy,” Karen said.

“The test-screening audience didn’t feel like it was an exciting enough ending for [Elle], success-wise.”

So, a new ending was written – which included Elle’s graduation speech and her epic takedown of ex-boyfriend Warner- and the whole thing was re-shot.

There was just one problem: Reese was already in England shooting a new movie, The Importance of Being Earnest, and had cut her character’s long, blonde hair after it became “damaged from all the hot rollers”.

The change in her appearance is most noticeable when Elle exists the courtroom after proving friend Brooke Windham’s innocence, and Warner says he has finally realised she is his perfect match.

As Elle tells him off for being a “bonehead”, she is actually wearing a wig, making her hair appear more red than blonde. She also, suddenly, has freckles.

Reese isn't the only actor wearing a wig in the film's final scenes: Luke Wilson, who plays new boyfriend Emmett, is also donning a wig after shaving his head for his role in The Royal Tenenbaums.

The graduation scene was even shot in two entirely different locations: Reese's speech in London and the crowd's reaction shots in a soundstage in California.

"But the new ending was way more satisfying."

(And, it gave us the epic viral moment that Donald Trump totally plagiarised her speech...)