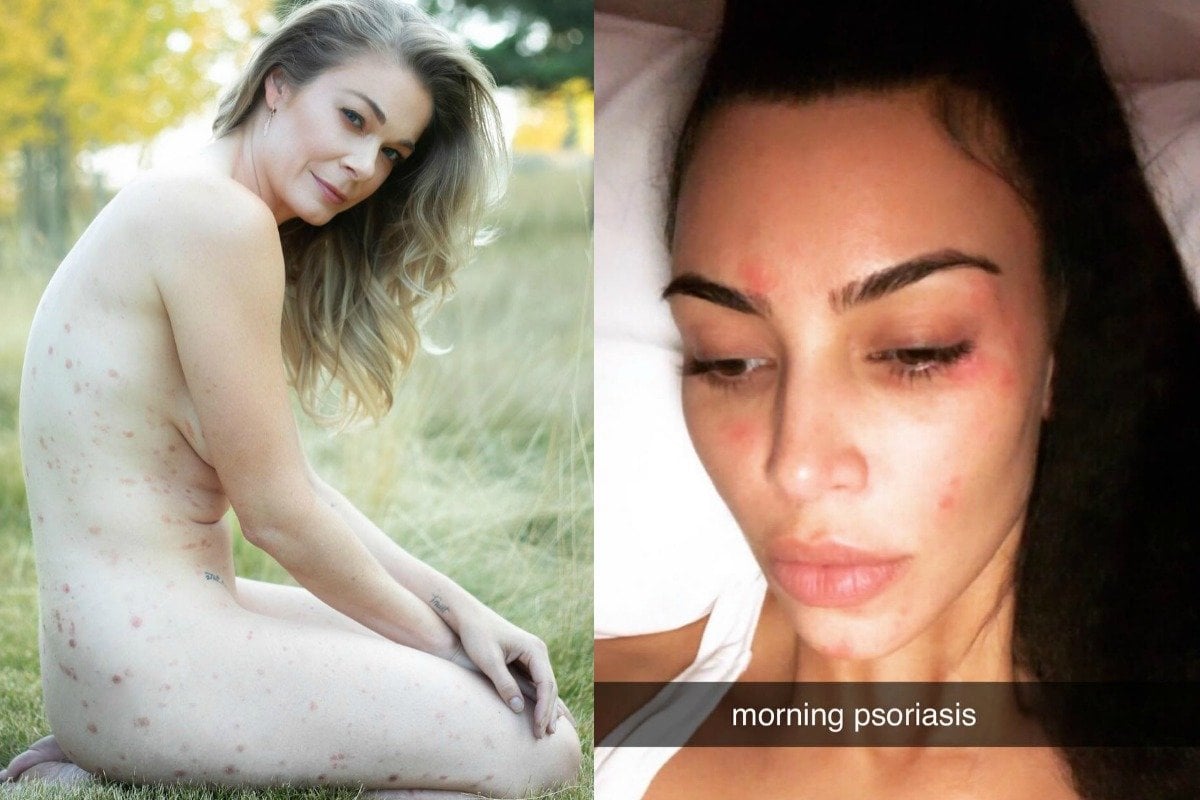 If you have psoriasis, you know the struggle all too well - it's a relentless condition with no known cure, and can be extremely fickle to deal with.

On top of the pain, itchiness and irritation, the stigma of having a visual skin concern is real - and can impact sufferers' self-esteem.

Psoriasis is a condition where the body produces new skin cells in days, rather than weeks, without naturally sloughing them off in between. It causes "scaling skin with spontaneous relapses and remissions," explains Dr Sean Arendse from Flawless Rejuvenation.

The chronic condition is genetic, however stress can also be a trigger for people who develop it.

Those who have psoriasis will also know how hard it is to manage. While there are topical skincare and medications out there that can help control flare-ups, no treatment can cure them.

What you might not know, though, is just how common it is. According to the International Federation of Psoriasis Associations (IFPA), nearly three per cent of the world’s population has some form of psoriasis.

Here are four celebs who have documented their struggle with psoriasis, and in turn have helped raise awareness about this common, yet often misunderstood, condition.

In an essay for Glamour, LeAnn Rimes recently talked about her experience with psoriasis - a condition she's had since she was two years old.

She said, "When I was in public, I did I everything I could to hide it. Onstage I’d often wear two pairs of pantyhose or jeans. Underneath my shirt, my whole stomach would be covered in thick scales that would hurt and bleed. For so much of my life, I felt like I had to hide."

The singer said she's spent most of her life trying to treat her psoriasis with steroid creams, medications and experimental treatments, saying she felt like she was hiding and holding herself back.

But in honour of World Psoriasis Day, Rimes decided to pose nude and raise awareness of the autoimmune disease.

"I want to give a voice to what so many other people are going through. This is finally my time to be honest about what psoriasis is and what it looks like," she said.

"You know when you say something you've been holding in for so long, and it's such a sigh of relief? That's what these photos are to me. I needed this. My whole body - my mind, my spirit - needed this desperately," she said.

"When I look at these photos, I see so much more than my skin."

So much of my journey, both personally and within my creations, my new chant record and podcast coming out soon, has been excavating pieces that I’ve been hiding and bringing them to the light. It’s been and still is a journey of allowing them out and welcoming and reintegrating those fragments back into wholeness. Music has been my gift, and why I’m here. But I want to give a voice to these other pieces of me. And I want to give a voice to what so many other people are going through. This is finally my time to be unabashedly honest about what psoriasis is and what it looks like. You know when you say something you’ve been holding in for so long, and it’s such a sigh of relief? That's what these photos are to me. I needed this. My whole body—my mind, my spirit—needed this desperately. With today being World Psoriasis Day, I thought this would be the perfect time to share my story with @glamourmag, head to the link in my bio/ stories to read my full essay 💕 #worldpsoriasisday #psoriasis #psoriasisawareness #glamourmag #whatilivewith

Through the years Kim Kardashian West has also shared her experience with psoriasis, after being diagnosed with it in 2011.

In an episode of Keeping Up With The Kardashians, the reality star talked about how the skin condition made her feel insecure and embarrassed.

"My career is doing ad campaigns and swim photo shoots. People don't understand the pressure on me to look perfect," Kardashian West said.

"When I gain a pound, it's in the headlines. Imagine what the tabloids would do to me if they saw all these spots."

However, Kardashian West has managed to make peace with her skin condition over the years, sharing her journey in an article on sister Kourtney's lifestyle website Poosh last year.

She wrote, "I have learned to live with this spot without using any creams or medication - I just deal. Sometimes I cover it up and sometimes I don’t. It doesn’t really bother me."

In the article, she also offered some advice for people dealing with psoriasis, adding "If you have psoriasis, you can’t let it ruin your life or get the best of you."

I’m so excited for you guys to try my new @kkwbeauty Body Collection. It consists of 3 different products (body make up, a liquid body shimmer and a loose shimmer powder). I use them all separately and sometimes all together depending on the look I am going for. This one shown above is the body Make Up. This is what I use most often. I don’t always like my legs to have shimmer on them. I use this when I want to enhance my skin tone or cover my psoriasis. I bruise easily and have veins and this has been my secret for over a decade. I’ve learned to live with and not be insecure of my psoriasis, but for days when I want to just cover it up I use this Body Makeup. My formula is so creamy and buildable and has a smooth satin finish. It builds easily for a more full coverage if needed. It launches 06.21.19 at 12pm pst at kkwbeauty.com #kkwbeauty.  Stay tuned for some videos showing how i use it all.

When we thought we couldn't possibly love Jonathan Van Ness more than we already do, the Queer Eye star opened up about having psoriasis on Instagram.

Posting an untouched photo of him in briefs and a jacket, he wrote "Sickeningly Gorge, I left my psoriasis & my body unretouched, why should I dim my shine henny?"

Sickeningly Gorge, I left my psoriasis & my body unretouched, why should I dim my shine henny? 📸 @asussmanphoto #mensbeauty

Cue: ALL the positive comments.

Masses of people responded to the post with their own personal experiences with the condition, showing just how many people know first-hand what it's like to battle the chronic condition.

One follower wrote, "Almost every member of my family have been hit extremely hard by psoriasis. Reading your post is INSPIRING! You are a super inspiration and don’t ever forget it!"

How good is that.

"I was going to start FaceTuning the spots out, but then I was like, 'No, I'm just gonna post it," he later told Allure.

"Your body is fierce, it's cute, it's fine, and the more people that know about psoriasis, the more you'll stop having to tell cute guys about it when you take your top off."

In an interview with The Times, Cara Delevingne candidly talked about how her gruelling modelling schedule led her to feeling "hollow" and "ugly".

She described how the stress of modelling caused her to develop psoriasis, which had to be constantly covered up in thick makeup.

She told The Times, "People would put on gloves and not want to touch me because they thought it was, like, leprosy or something."

She revealed how the stigma about her condition led her to take a break from modelling.

"It wasn't a good time, I was, like, fight and flight for months. Just constantly on edge. It is a mental thing as well because if you hate yourself and your body and the way you look, it just gets worse and worse."

Do you suffer from psoriasis? Share your experience with us below.