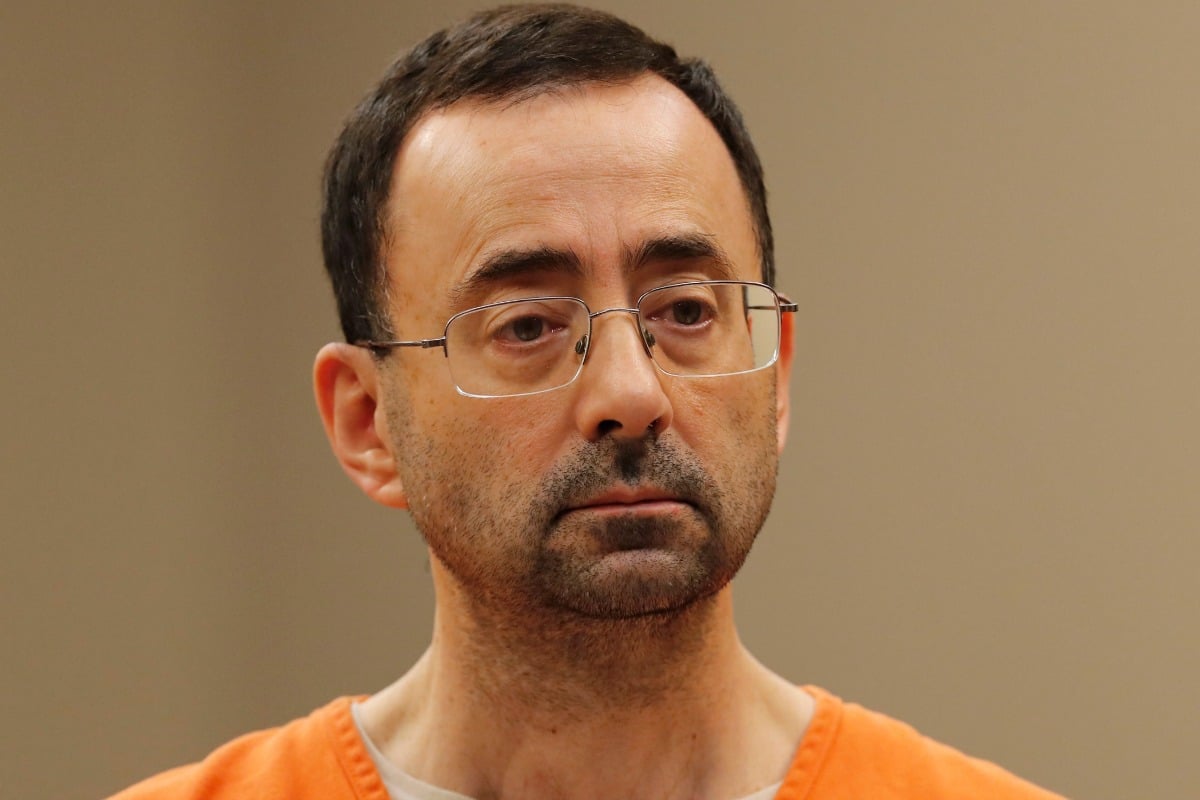 Warning: This post deals with descriptions of sexual assault and trauma and might be triggering for some readers.

In 1986, 22-year-old Larry Nassar began working as an athletic trainer and physician for USA Gymnastics.

The nerdy, slightly awkward man, later described by some of the gymnasts as "Inspector Gadget like", was neither charismatic nor smooth.

WATCH: Athlete A, the new documentary on Netflix follows the story of Larry Nassar. Post continues after video.

Seven years into his stint with the national team, he obtained his osteopathic medical degree and from the late 90s, was promoted to national medical coordinator and team physician, in charge of the young gymnasts' health and wellbeing.

Around the same time, he married his wife Stephanie, and the couple went on to have three children, two daughters and a son.

Nassar was widely loved in his home state of Michigan.

In fact, many went on to say he didn't just groom the young girls on his examination table, he groomed the entire community. So much so, when allegations against him made headlines they were laughed off, ignored, and condemned. 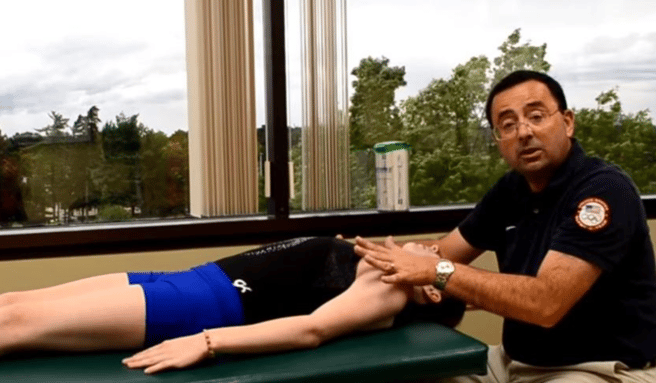 At this point of the story, it's important to explore the culture of USA Gymnastics. As the new Netflix documentary Athlete A explains, Nassar picked the perfect system to be a predator in.

Emotional and physical abuse along with cruelty was the norm, according to former gymnast Jennifer Sey, who competed in the 1980s.

"We were beaten down by that and made so obedient, that when we knew there was a sexual abuser in our midst we would never say anything, we were utterly powerless," she told the documentary.

This wasn't helped by the fact that gymnasts had been getting younger and younger since the mid 1970s, thanks to the success of Nadia Elena Comăneci, who won Olympic gold in 1976, when she was just 14. 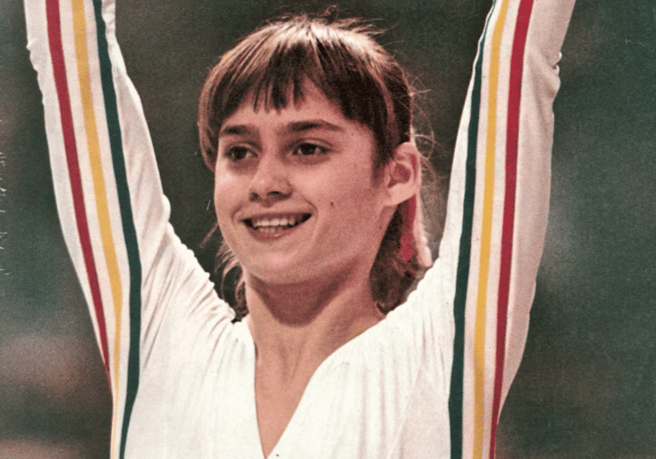 By the time Nassar joined the sport, the aesthetic of young, tiny and childlike was well embedded.

Marry that with the organisation's failure to report allegations of abuse, and even go as far as to cover them up, and Nassar found himself in the perfect hunting ground.

Between 1992 and his arrest in 2017, he had more than 500 alleged victims, including nine Olympians, many of whom he molested hundreds of times.

Rachael Denhollander was 12 when she started gymnastics. "The first time I went to see Larry in early 2000, I was barely 15 years old," she says in the documentary.

"Externally he did legitimate therapy with his right hand, and with his left he sexually assaulted me under the towel. He would position himself between me and my mum, but since she was so close I presumed she was aware of what was going on. I didn't know until months later she had no idea, she couldn't see where his other hand was because he was intentionally blocking it." 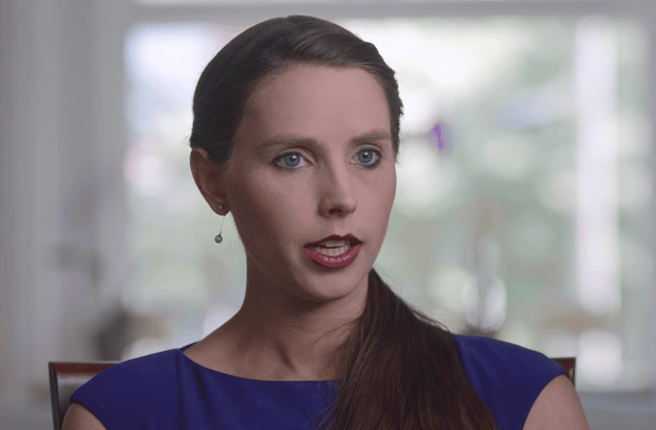 Rachael Denhollander is one of more than 500 women who have accused Nassar of sexual abuse. Image: Netflix.

Nassar molested multiple victims while their parents watched on, unknowingly. He molested victims under blankets in busy gyms full of people, made girls completely undress unnecessarily in his office, and many of his victims said the medical professional put his fingers into their vaginas and anuses with his bare hands.

In 2016, the Indy Star broke a story on the abuse of two victims, and later that year Nassar was charged with the sexual assault of one child, who was six when the abuse began in 1998.

The following month, he was charged with child pornography charges, after the FBI found more than 37,000 images and videos inside his home, including a video Nassar allegedly made himself.

Despite the charges, many in the community refused to believe them, and he even got 2,700 votes after running for the local school board. But the allegations kept coming, and so did the victims' harrowing stories.

In January 2018, he received a sentence of 175 years in Michigan state prison after being found guilty on multiple counts of sexual abuse against multiple girls.

At his hearing, 156 current and former gymnasts read deeply personal and graphic impact statements about the abuse he subjected them to. 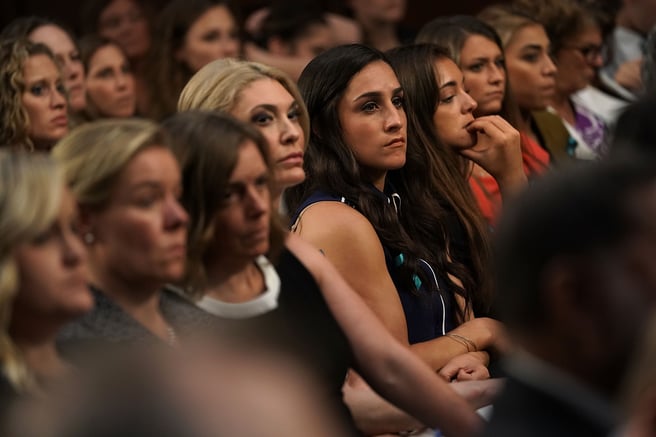 "Perhaps you have figured it out by now, but little girls don't stay little forever. They grow into strong women who return to destroy your world," she told her attacker.

The now 56-year-old will die in prison.

After being assaulted at a prison in Arizona, hours after being released into the general prison population, he was transferred to the Florida penitentiary which is known for being safer. 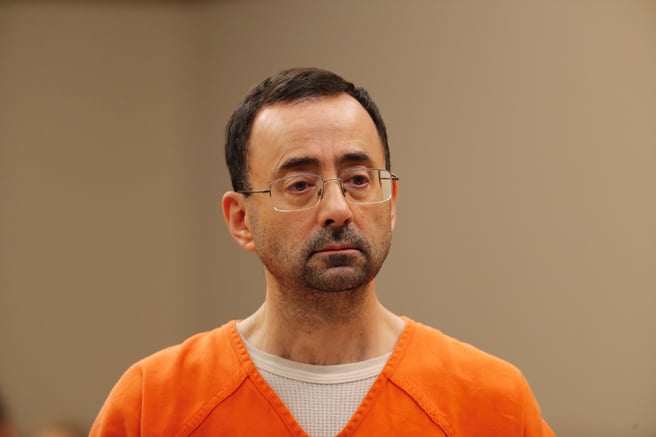 56-year-old Larry Nassar will spend the rest of his life in prison. Image: JEFF KOWALSKY/AFP/Getty.

In January 2020, USA Gymnastics filed for bankruptcy after 100 lawsuits representing more than 350 athletes in various courts across the country were levelled at the organisation, who blame the group for failing to supervise Nassar.

They've offered to pay survivors $312 million in compensation, in an effort to settle the multitude of legal claims.

But one of the lawyers representing 200 of the athletes says the offer is "not just unworkable it is unconscionable," given the number of victims and the extent of damage, trauma and abuse Nassar subjected them to.

Athlete A is now streaming on Netflix.