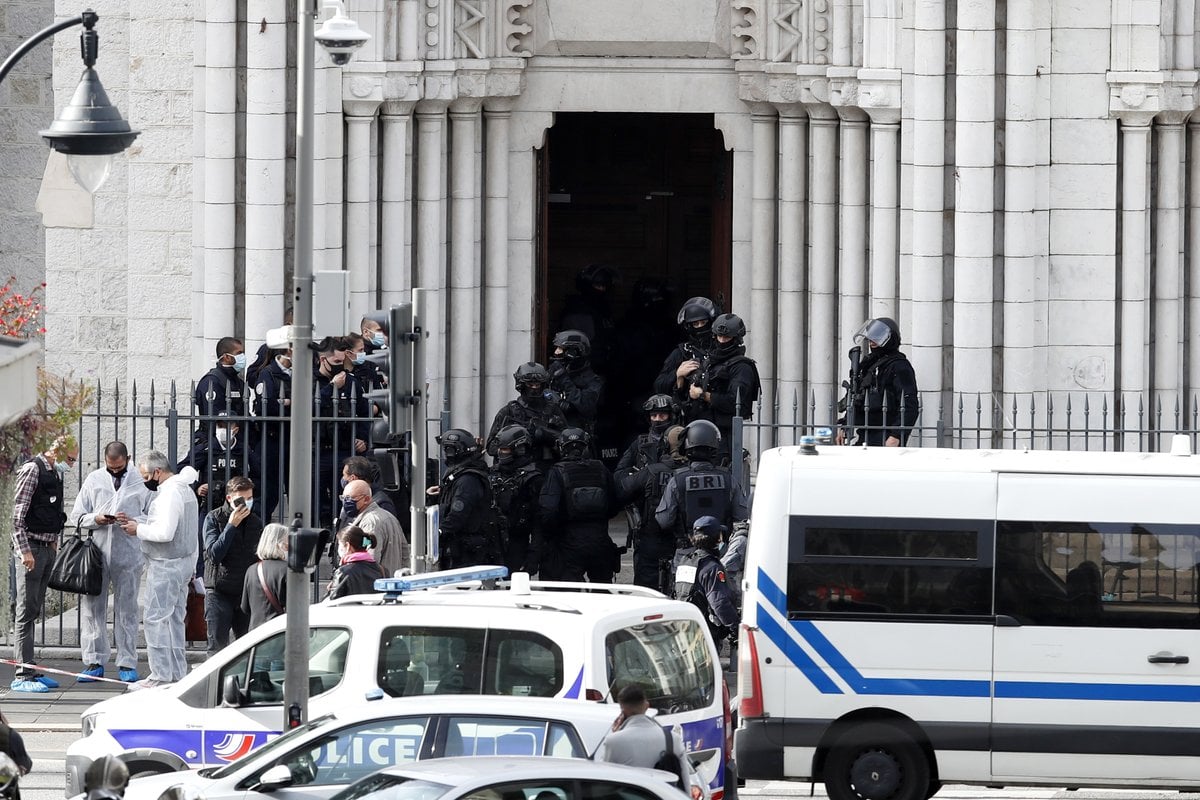 Three people have been killed in a terror attack on a church in Nice, with France now at an "emergency" alert level, as soldiers are deployed across the country in response.

One of the victims, a woman in her 70s, was "virtually beheaded" inside the Notre Dame Basilica. A man died from throat injuries, and another woman, in her 30s or 40s, managed to get to a nearby pub where she succumbed to multiple injuries.

Her last words have been reported as being, "tell my children I love them."

Police have described the scene as a "vision of horror," with French President Emmanuel Macron calling the murders an "Islamist terrorist attack". 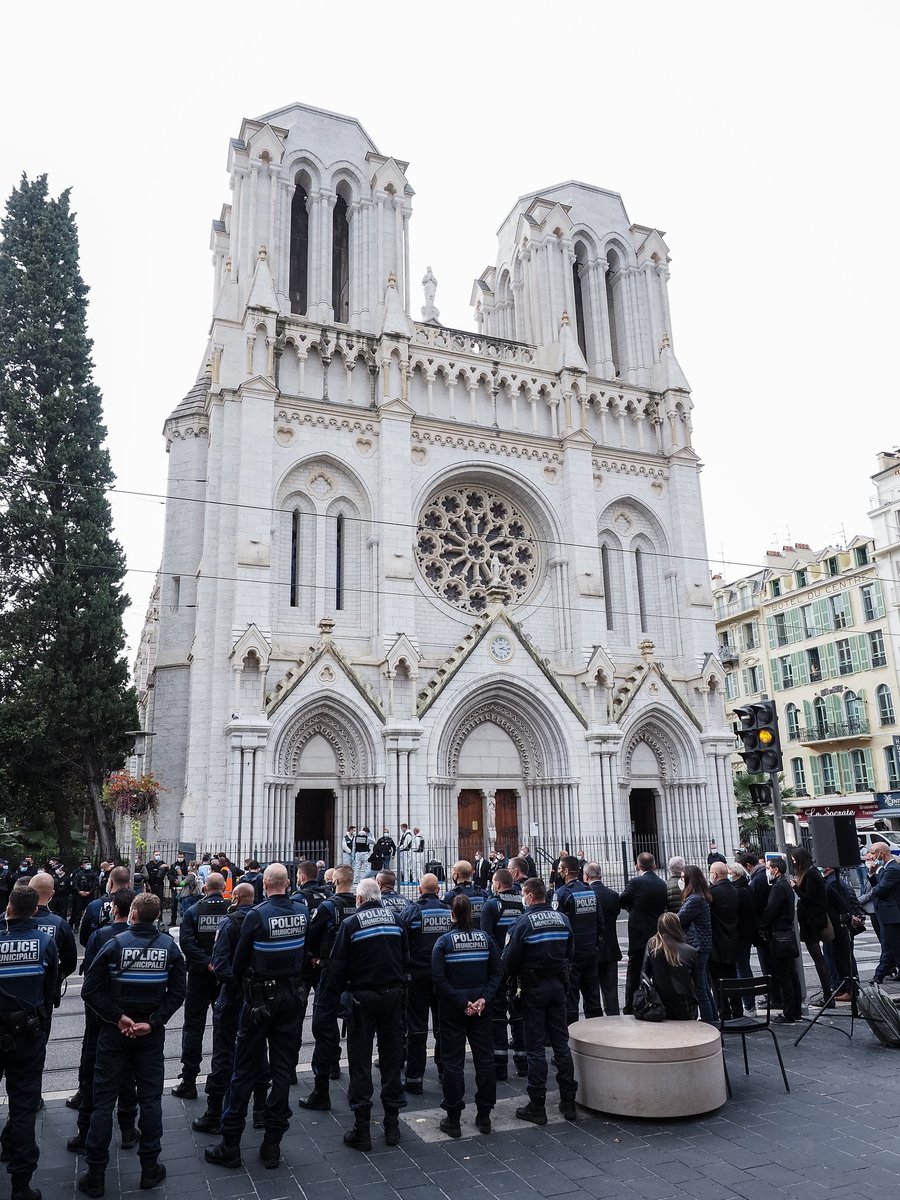 Police stand in front of Notre-Dame basilica on October 29, 2020 in Nice, France. A man armed with a knife fatally attacked people in the Notre-Dame church in Nice, located in the heart of the city. Image: Arnold Jerocki /Getty.

The attacker was shot and injured by police and taken to hospital. He has since been named as 21-year-old Brahim Aouissaoui - a Tunisian migrant who arrived in France earlier this month.

The mayor of Nice, Christian Estrosi, said the attacker had repeated “Allahu Akbar” (God is greatest) several times while he was being arrested and handcuffed by police.

A defiant President Emmanuel Macron has deployed thousands more soldiers to protect important French sites, such as places of worship and schools.

"France has been attacked over our values, for our taste for freedom, for the ability on our soil to have freedom of belief. And I say it with lots of clarity again today: we will not give any ground," he said in a press conference.

Within hours of the Nice attack, police killed a man who had a threatened a passersby with a handgun in Montfavet, near the southern French city of Avignon. He was also shouting "Allahu Akbar" (God is greatest), according to radio station Europe 1.

Earlier this month French middle school teacher, Samuel Paty, was beheaded in Paris in an eerily similar attack. The attacker had said he wanted to punish Paty for showing pupils cartoons of the Prophet Mohammad in a civics lesson. 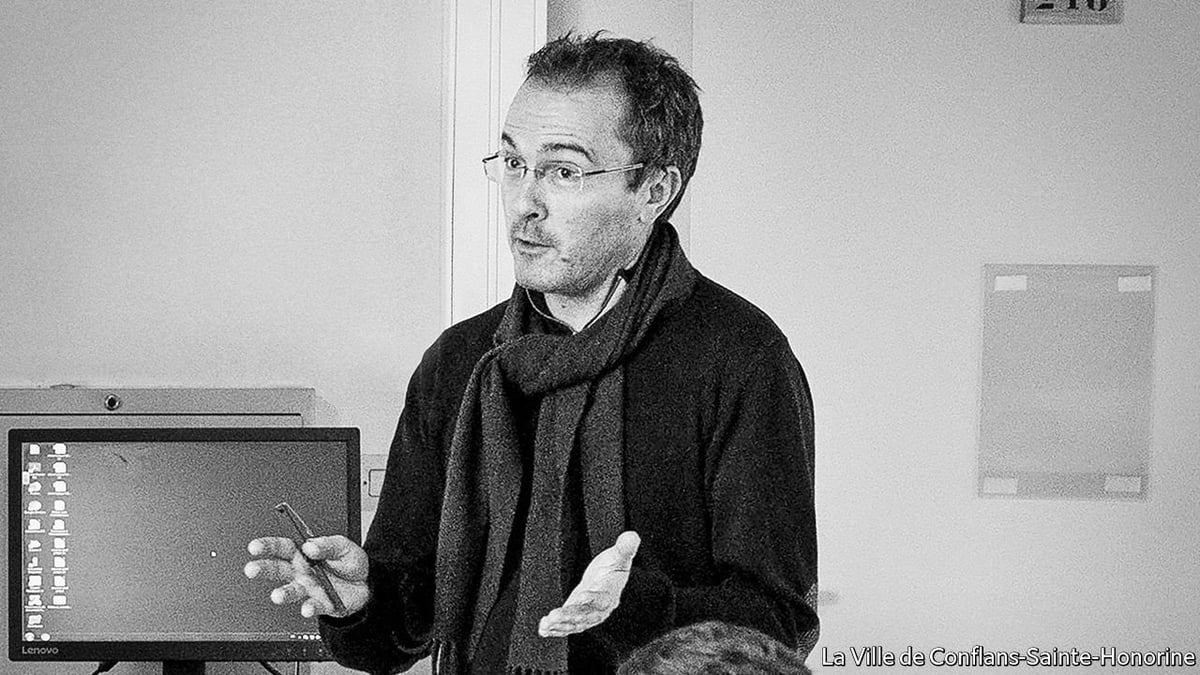 Samuel Paty was murdered on October 16 in Paris. Image: Facebook.

Since Paty's killing, French officials - backed by many ordinary citizens - have re-asserted the right to display the cartoons, and the images have been widely displayed at marches in solidarity with the killed teacher.

It prompted an outpouring of anger in parts of the Muslim world, with some governments accusing French leader Emmanuel Macron of pursuing an anti-Islam agenda.

The motive for the attack in Nice is under investigation.

This post was originally posted on October 29, 2020, and has been updated.