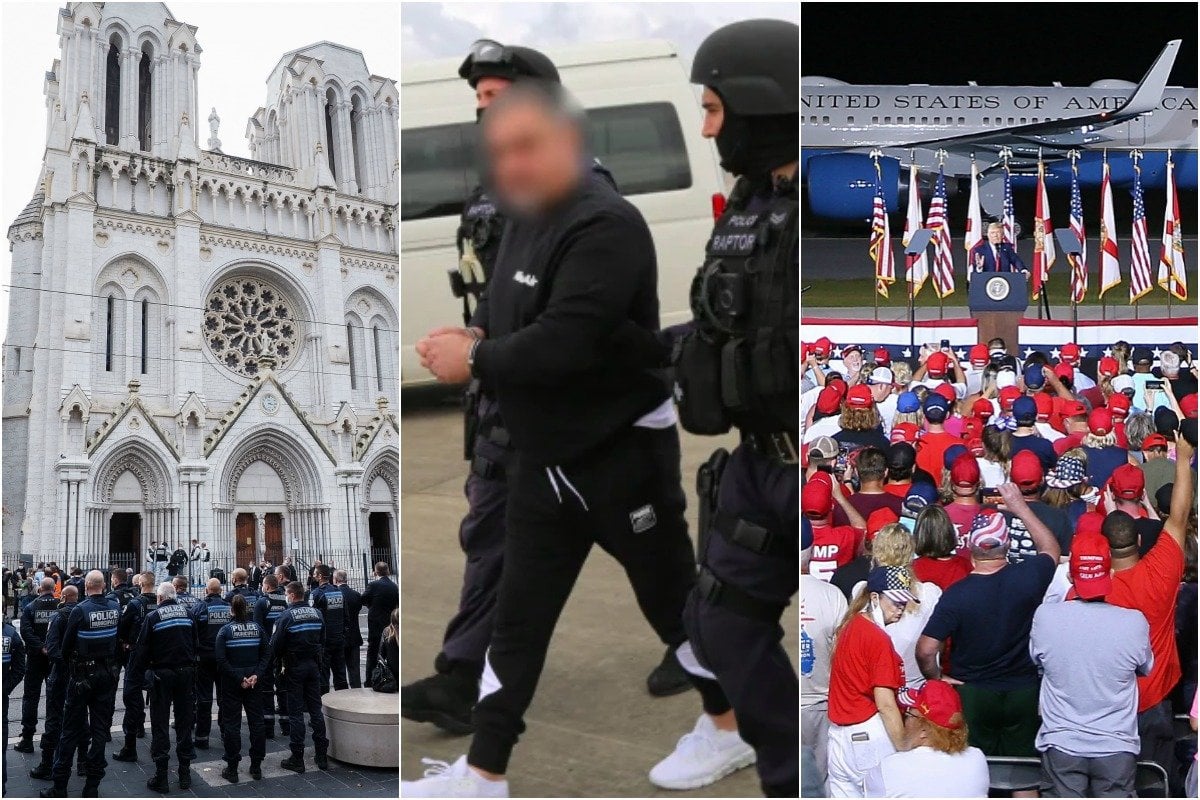 A knife-wielding attacker shouting "Allahu Akbar" has beheaded a woman, and killed two other people in a suspected terrorist act inside the Notre Dame Basilica in the city of Nice, in what French President Emmanuel Macron is describing as an "Islamist terrorist attack".

Authorities have named the church attacker as Brahim Aouissaoui, a 21-year-old Tunisian migrant. He arrived in France earlier this month.

Within hours of the Nice attack, police killed a man who had a threatened passersby with a handgun in Montfavet, near the southern French city of Avignon. He was also shouting "Allahu Akbar" (God is greatest), according to radio station Europe 1.

BREAKING: French President Emmanuel Macron says "France is under attack" after three people died in a knife attack in Nice.

A member of the Senate of France has publicly stated that one of the victims of the church attack, a woman in her 30s or 40s, managed to escape and took refuge in a nearby bar before succumbing to her stabbing injuries. Her last words were 'tell my children that I love them.'

Authorities have said one of the victims - a woman in her 70s - was "virtually beheaded" inside the church.

The third victim was a man in his 40s or 50s, who died from throat wounds inside the church.

In Saudi Arabia on Thursday, state television reported that a Saudi man had been arrested in the city of Jeddah after attacking and injuring a guard at the French consulate.

The attack is also similar to the beheading of French teacher Samuel Paty in an attack this month in Paris.

France is at an "emergency" alert level and is doubling the number of soldiers deployed across the country after the killings.

Ahead of Melbourne's first weekend in months with open pubs, restaurants and cafes, Mr Andrews sent a warning to businesses and customers.

"If you do not do the right thing in your shop, in your setting, in choices that you make, whether you be a customer, a worker or a business owner, then you are putting everyone at risk," he told reporters.

Premier Daniel Andrews has revealed details about how Victorians can celebrate this festive season, and with who. https://t.co/AyCG4Vq6yq

On-the-spot fines of $1652 for individuals and $9913 for businesses can be meted out for COVID-19 restriction breaches.

The premier said Victorians could report suspected breaches to the coronavirus hotline (1800 675 398), with Victoria Police, WorkSafe and authorised officers following up.

A Melbourne childcare centre was closed and up to 100 people forced into self-isolation after a girl connected to a cluster in Melbourne's northern suburbs tested positive to COVID-19.

The young girl was among three new cases recorded in Victoria on Thursday, although the two other infections are under investigation and may be removed from the state's tally.

West Australians may finally be about to receive clarity on the state's hard border closures, with senior government leaders to consider updated health advice.

The state disaster council, chaired by Premier Mark McGowan, will meet on Friday to discuss the advice which is yet to be publicly released.

A new poll this week has shown most West Australians wanted the premier to set a date for reopening state borders. Every other state and territory has committed to reopening its borders by Christmas.

Queenslanders are expected to learn on Friday if the border with NSW will be reopened amid continued COVID-19 outbreaks in that state.

The border between the two states closed in August, with Queensland saying it would reopen it on November 1 if NSW has control of virus outbreaks in the community.

That was thrown into jeopardy on Thursday when the southern state recorded another mysterious virus case with no links to a known cluster.

Ms Palaszczuk said she expects to inform the public of the border decision before midday.

Footage appears to show baby found in Doha, as report from authorities due to Australia.

The discovery of the infant led to a number of women, including 13 Australians, being forced to undergo internal medical examinations earlier this month.

CCTV vision appears to show the baby found at Hamad International Airport in Doha, where women were forced to undergo invasive medical examinationshttps://t.co/SpIeQYVAb1

Prime Minister Scott Morrison has described the strip searches as unacceptable and appalling. But Labor has accused the government of being too slow to respond.

The Qatari government has announced an investigation and expressed its regret, with a report on the incident due to Australian authorities today.

Aviation workers are threatening to take action against Qatar Airways if the investigation is not transparent and comprehensive.

Former bikie boss Hassan "Sam" Ibrahim has been handed over to federal authorities in preparation for his deportation to Lebanon, after he was paroled from a nine-year jail term in NSW for a firearm offence.

The brother of Kings Cross identity John Ibrahim, Sam Ibrahim had spent more than five years behind bars for conspiring to supply guns before he was granted parole in September.

He was was arrested in 2014 with his sister, her partner, and former Rose Tattoo drummer Paul DeMarco, after raids in Sydney and the Illawarra uncovered an M1 military-grade assault rifle, a standard rifle, three pistols, two shotguns and 11 handguns.

#BREAKING: Sydney crime figure Sam Ibrahim is being deported from Australia back to Lebanon after being released from Long Bay jail.

In 2015, the Department of Home Affairs cancelled his visa under character grounds due to his extensive criminal history, clearing the way for him to be deported upon his release from prison.

Lebanon-born Ibrahim has lived in Australia since he was four, and has children to an Australian wife.

Ibrahim was handed over to Australian Border Force officials around 11am on Thursday. 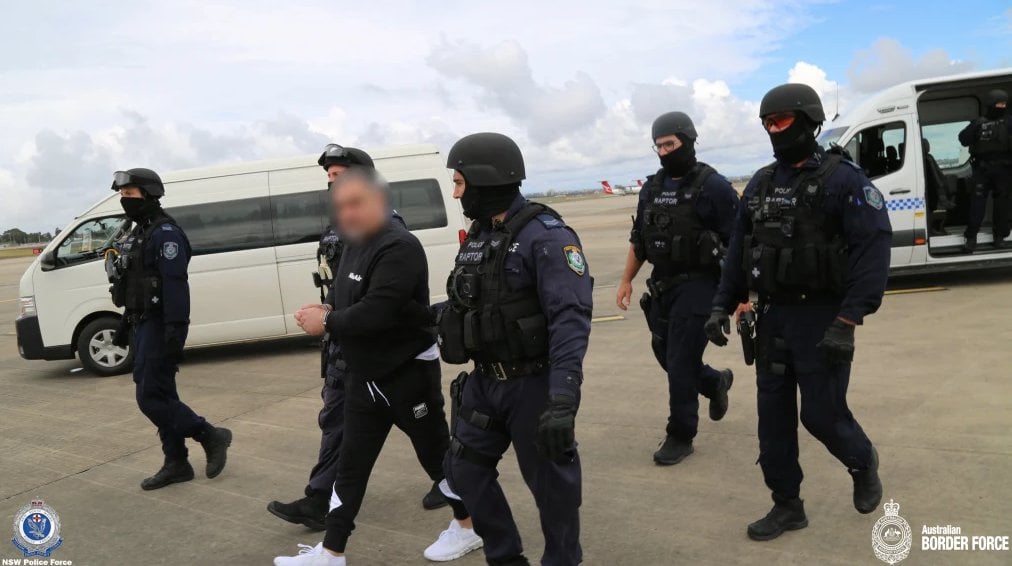 Ibrahim is being sent back to Lebanon. Image: NSW Police Force.

Transport authorities have offered to stall works on Djab Wurrung Aboriginal cultural sites as a battle over a highway duplication on sacred Indigenous land grows.

But the offer by the state government and Transport Victoria has been rejected by lawyers who were on Thursday successful in an injunction bid to stop all work on the Western Highway near Ararat.

A new legal battle was sparked this week after a directions tree in the state's west was cut down, prompting fears for six more trees of significance to local Indigenous people.

"I can feel the chainsaws tearing through my heart, my spirit, my DjapWurrung body is in pain," wrote Sissy Austin, a Djab Wurrung woman and member of First Peoples’ Assembly of Victoria. Link in bio.

The case will return to court next week.

Trump, Biden both campaign in Florida with 5 days left on the campaign trail.

US President Donald Trump and Democratic rival Joe Biden are set to rally their supporters in the battleground of Florida, visiting the same city hours apart.

Opinion polls indicate Biden has a significant edge across the US but his lead is tighter in battleground states.

A Reuters/Ipsos poll released on Wednesday showed Trump had essentially moved into a tie with Biden in Florida, with 49 per cent saying they would vote for Biden and 47 per cent for the president.

I was thrilled to be back in my home state of FLORIDA! 5 days from now, we are going to win FLORIDA, and we are going to WIN 4 more years in the White House. Get out and VOTE! MAKE AMERICA GREAT AGAIN!! pic.twitter.com/cbk66G7tlU

With its 29 electoral votes, the state is a major prize in next Tuesday's election.

Trump will stage an outdoor rally in Tampa while Biden will hold a drive-in rally later in Tampa where attendees will remain in their cars.

More than 73 million people have already voted in the US, absentee or by mail, and Trump and Biden are trying to energise the millions more who will vote on November 3.

The commemorative coin, distinguished by a bright-orange centre surrounded by a male and female firefighter, was launched by the Royal Australian Mint on Thursday.

Twelve months on from the devastating bushfires that swept the country, the Royal Australian Mint is honouring the bravery and sacrifice of Australia’s firefighters by releasing a new commemorative coloured $2 coin into circulation. #Brave #Firefighters pic.twitter.com/IiO4Zswp1L

The coin will enter general circulation and also be available to purchase as a collectable, with $125,000 of proceeds to go to emergency service organisations including Victoria's Country Fire Authority.

"This coin will reach communities across the country and will highlight the risk our members take each and every day to keep Victorian communities safe," CFA chief officer Garry Cook said.

- France has reported nearly 50,000 new coronavirus cases in just 24 hours as the country prepares to go into lockdown on Friday.

- A UK judge has granted a delay of a court case against Associated Newspapers after Meghan Markle's team gave a "confidential ground" for doing so.