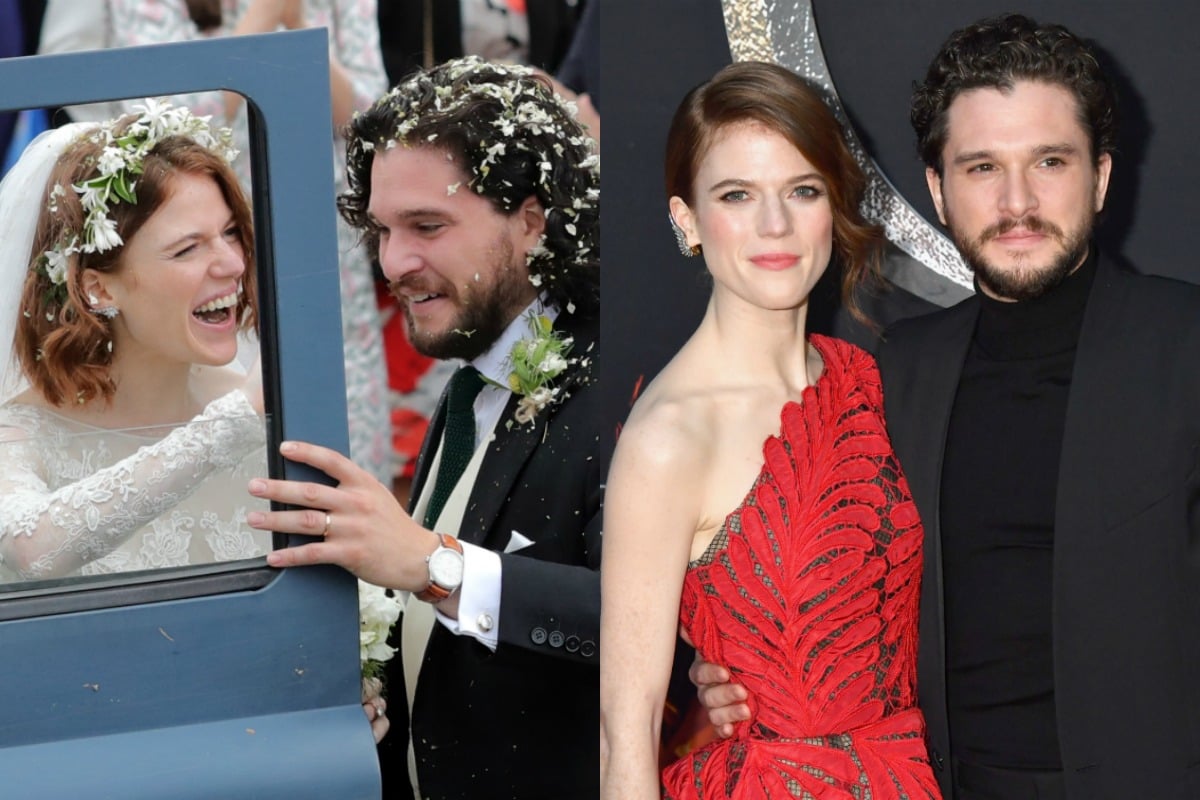 And now, in some very exciting news, the couple are now expecting their first child together.

Leslie announced the news on Instagram on Sunday, sharing a black-and-white photo of her smiling with her baby bump from a Make magazine photo shoot.

As the couple prepare to be parents for the first time, here's a look back at their relationship.

Meeting on Game of Thrones.

The couple met on set while filming season two of Game of Thrones back in 2011. Leslie played Ygritte who falls in love with Harington’s character Jon Snow.

Five years later in an interview with Vogue Italia, Harington recalled the moment he fell in love with Leslie while filming the show in Iceland.

"The country is beautiful, because the Northern Lights are magical, and because it was there that I fell in love," he told the publication.

"If you're already attracted to someone, and then they play your love interest in the show, it's becomes very easy to fall in love."

In August 2012, rumours began swirling that the actors were dating after paparazzi photos showed the couple holding hands.

But while their characters were falling in love on the show, Harrington confirmed that in real life, he and Leslie were just friends.

"We really get on as friends and we hit it off very quickly when we first met and I think that reflects on-screen, because we've got a good dialogue going on off-screen," he told Winter is Coming reporter Simone Boyce in 2013.

Nonetheless, the rumours continued, leading Harrington to publicly address them for the first time in 2014.

"Me and Rose are very, very close and very good friends," he said. "And continue to be, actually. She's wonderful. But no, no love affair," he told The Standard.

For the next two years, speculation about their apparent relationship continued until the couple eventually made their red carpet debut together at the Olivier Awards in London in 2016.

Since then, the actors have continued to keep their relationship relatively private. 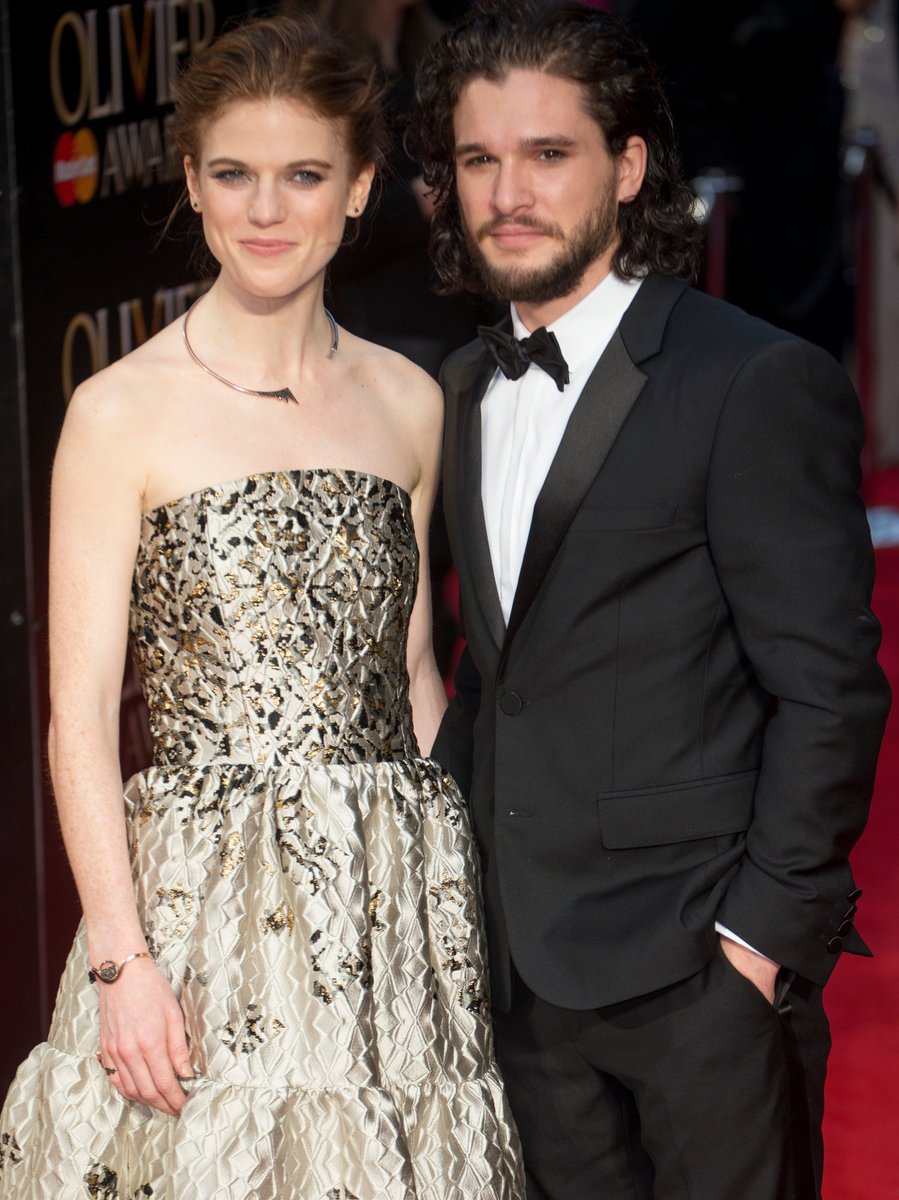 Rose Leslie and Kit Harington at the Olivier Awards in 2016. Image: Getty.

Their engagement and discovery about their family history.

In 2017, the couple announced they were engaged in a very cute way. They decided to share the news in a traditional style post in The Times of London.

"The engagement is announced between Kit, younger son of David and Deborah Harington of Worcestershire, and Rose, middle daughter of Sebastian and Candy Leslie of Aberdeenshire," the newspaper post read.

There’s going to be a Game of Thrones wedding pic.twitter.com/8UGGMCh9GH

Harington later shared that he planned a big surprise for the proposal but ended up ditching his plan in the moment.

"I was going to string up some lights in some trees and do all the romantic stuff," he said on The Jonathan Ross Show in 2017.

"But we were in the country and we were under this beautiful night sky and had a log fire burning and red wine. I blew my load early," he said, before realising how it came across.

"What I meant to say was, I popped my question a bit early."

But days after announcing their engagement, the internet discovered some... interesting information about the love birds. They are sorta, kinda related.

Considering King Charles II ruled from 1649 until 1660 (aka over 300 years ago), it’s more than likely that the couple are only distantly, distantly related. But still, it was enough to get Game of Thrones fans talking.

Kit and Rose are related now that's like a true Targaryen 😂😂

Alas, that didn't stop the couple from tying the knot in Scotland in 2018, alongside their fellow Game of Thrones cast members.

The couple recently celebrated their two-year wedding anniversary in June this year.

Just five months after saying 'I do', Russian model Olga Vlaslova claimed she had an affair with Harrington after they met in Luxembourg in 2017 when he was engaged to Leslie.

Vlasova even shared a nude photo of a man who she claimed was Harington on social media.

The actor's representative later denied the allegations in a statement.

"The allegations in this story are completely false," the statement read. "[Harington] has never even been to Luxembourg nor has he ever met Olga Vlasova."

Despite the rumours, the couple looked loved up at the Game of Thrones final season premiere in New York City. 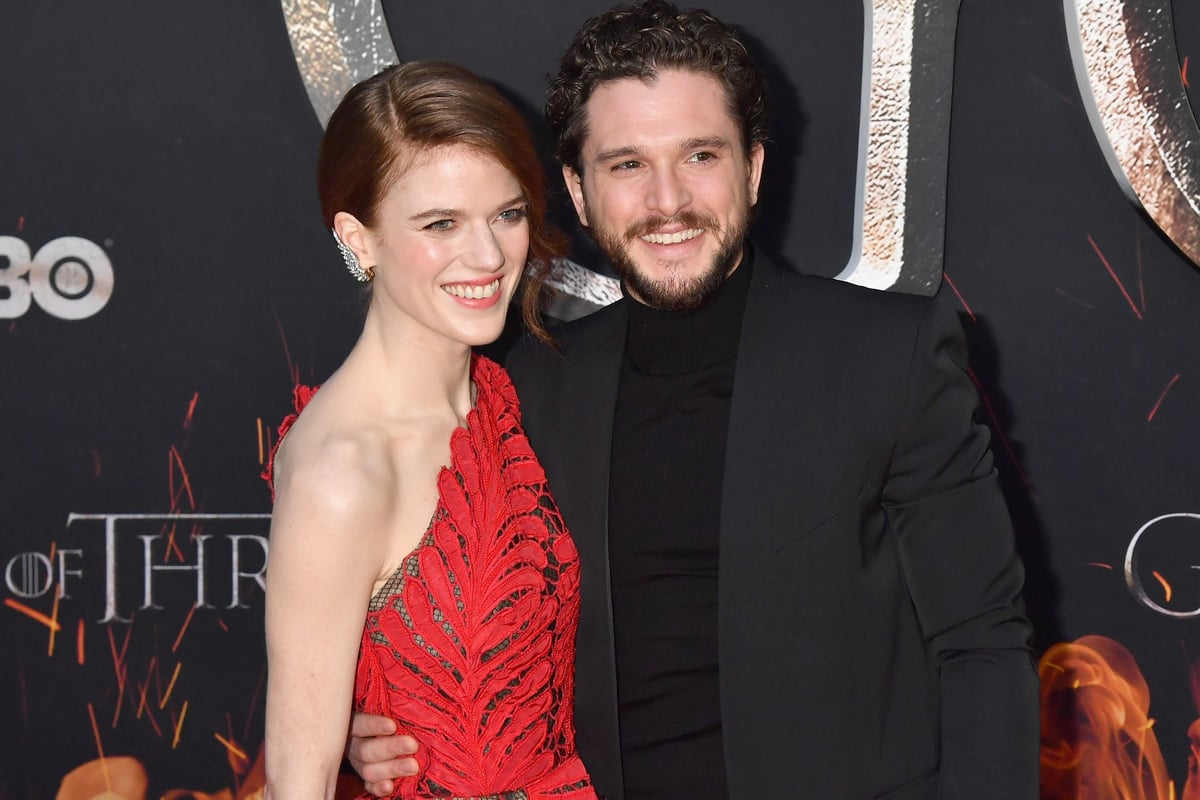 Rose Leslie and Kit Harington at the Game of Thrones premiere. Image: Getty.

In January last year, Harrington told GQ Australia that he liked the idea that one day his children will watch how him and Leslie met on Game of Thrones.

"I have no idea if we will, but say me and Rose do have children. They'll know. They'll be able to see the genesis of their parents getting together. Which is quite a wonderful thought, really."

We're sure their kid will love watching the show (when they're old enough, of course).