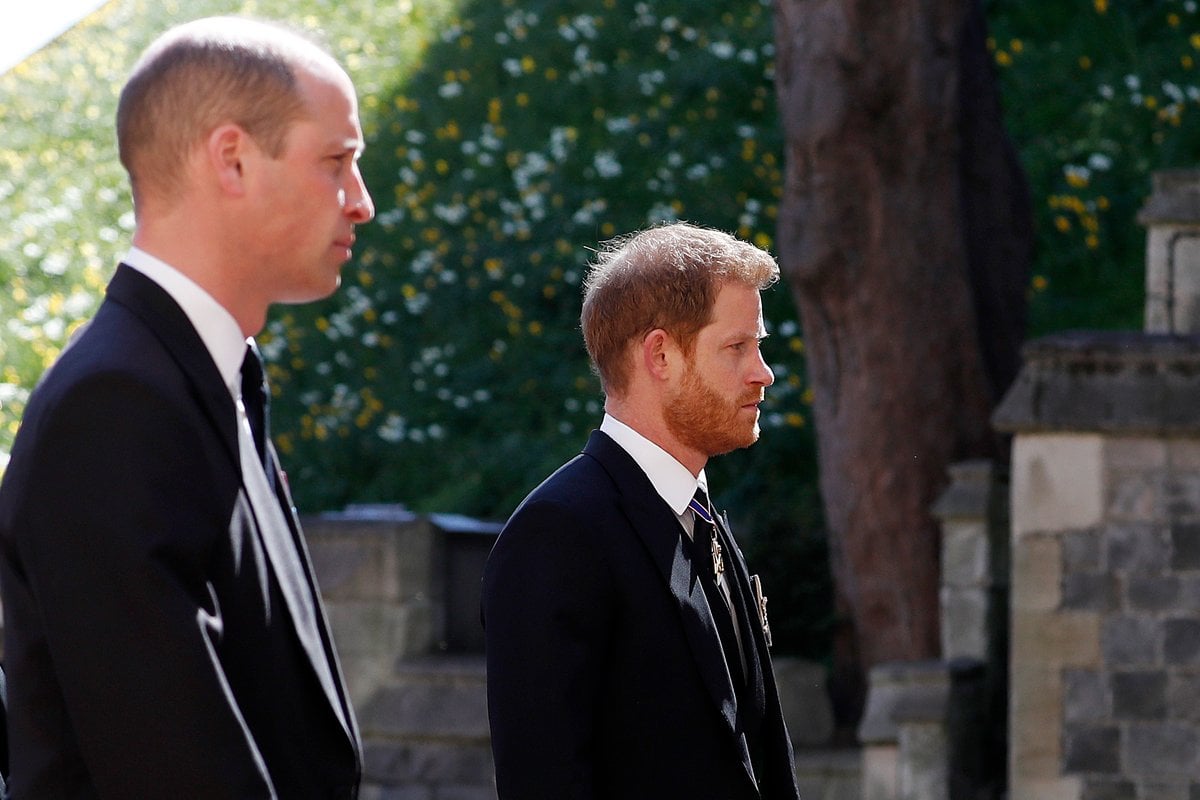 As the clock struck midnight in Australia, Prince Philip was laid to rest in a simple but sombre ceremony at St George's Chapel on Saturday, April 17.

Just 30 mourners were allowed to attend the service for the prince, who died April 9 aged 99. Still, more than 700 military personnel took part in the ceremony.

The entire royal procession and funeral took place out of public view within the grounds of the castle, but was shown live on television around the globe.

From the reunion of Prince Harry and Prince William to the heartbreaking image of the Queen sitting alone, here are the key moments from Prince Philip's funeral. 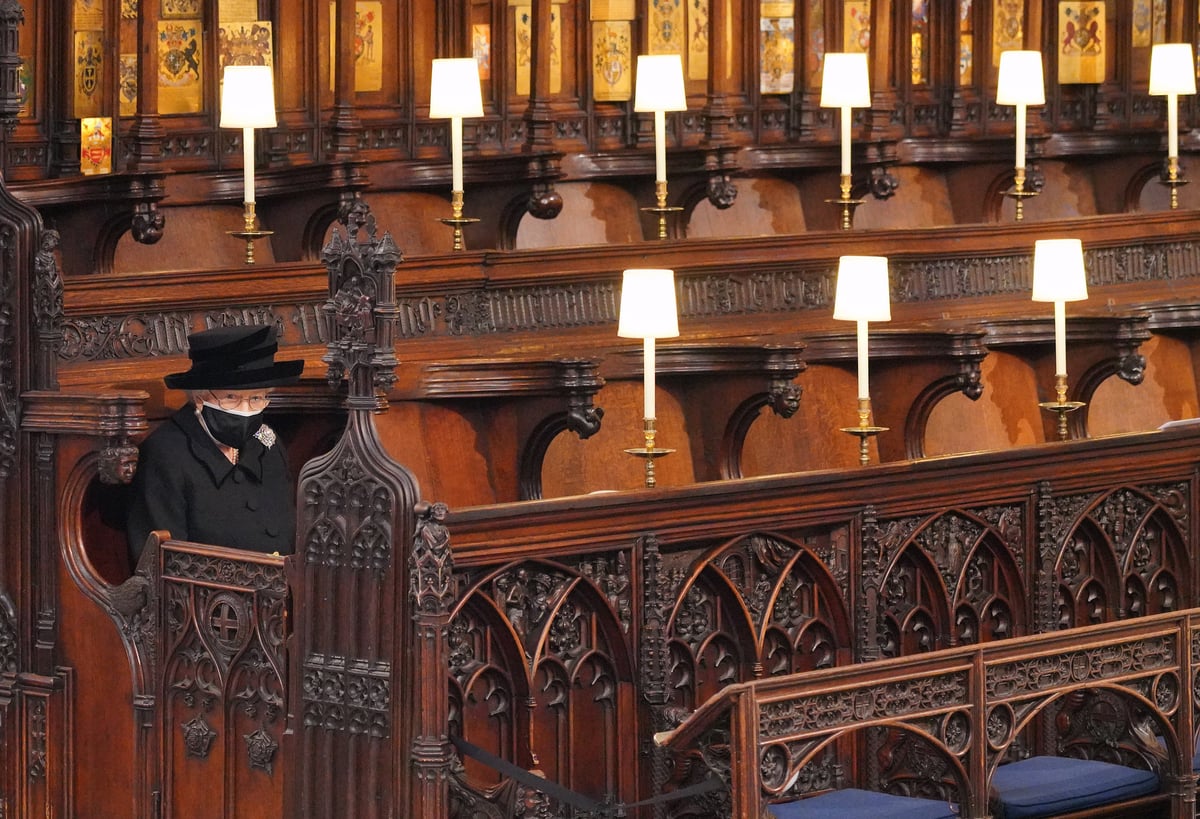 The Queen sits alone at her husband's funeral. Image: Getty.

Queen Elizabeth sat apart from family members on Saturday, in accordance with strict social distancing rules during the coronavirus pandemic, as she farewelled her husband of 73 years, her "strength and stay".

Wearing a face mask, the queen was dressed all in black, except for the diamond brooch that flashed on her left shoulder - a piece she had often worn on engagements with her husband.

The monarch's four children - Prince Charles, Princess Anne, Prince Andrew and Prince Edward - sat nearby, as did the Queen and Philip's eight grandchildren.

Inside the medieval Gothic chapel, the setting for centuries of royal weddings and funerals, this service was quiet and without excessive pageantry. Philip was deeply involved in planning the ceremony. At his request, there was no sermon. There were also no eulogies or readings, in keeping with royal tradition. 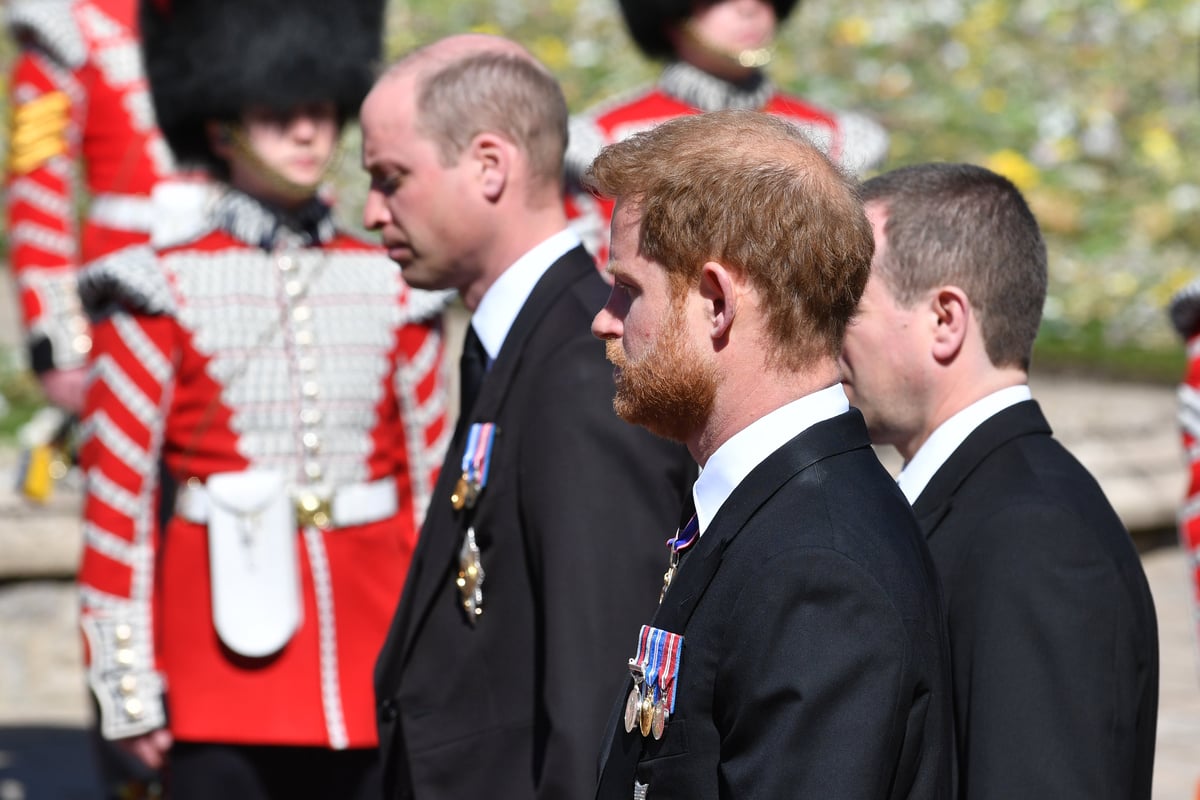 Prince William and Prince Harry made their first public appearance together since the Duke of Sussex and his wife, Meghan, gave a controversial interview to US television host Oprah Winfrey in which they confirmed a rift between the brothers and discussed the difficulties of royal life.

It was also the first time Prince Harry had been reunited with his family since his decision to quit royal duties and move to California.

Prince William and Prince Harry had sat opposite one another in St George's Chapel as the brothers bade farewell to their grandfather. After the service, the two brothers and Kate, Duchess of Cambridge, walked back to the castle together, seeming to chat amicably.

It appeared their conversation was relaxed, with Prince William mask-less as they walked and talked outside while Prince Harry kept his mask on.

While the duo have faced difficulties in their relationship over the last few months, they appeared to be friendly to each other at the service.

Watch: Prince Harry and Prince William walk and talk after their grandfather's funeral. 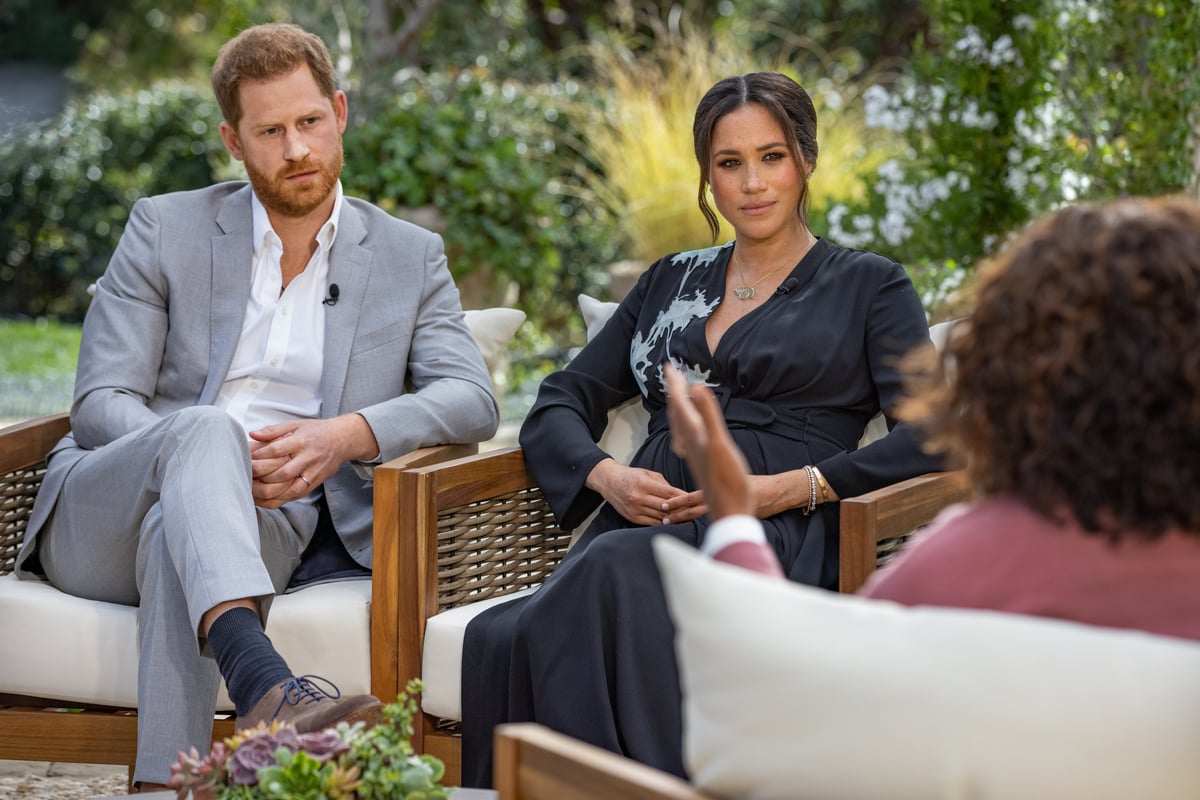 The Duchess of Sussex ensured the royal family knew she was thinking of them after the death of Prince Philip by sending a wreath to be laid in the Duke of Edinburgh’s name and a handwritten card, according to Vanity Fair.

Meghan, who is pregnant with her and Harry's second child, was advised not to travel by her doctor. She is due in the northern Summer (Australian winter).

It's understood she watched Prince Philip's funeral proceedings from her home in Los Angeles with their son, Archie.

Mourners did not sing during the ceremony. 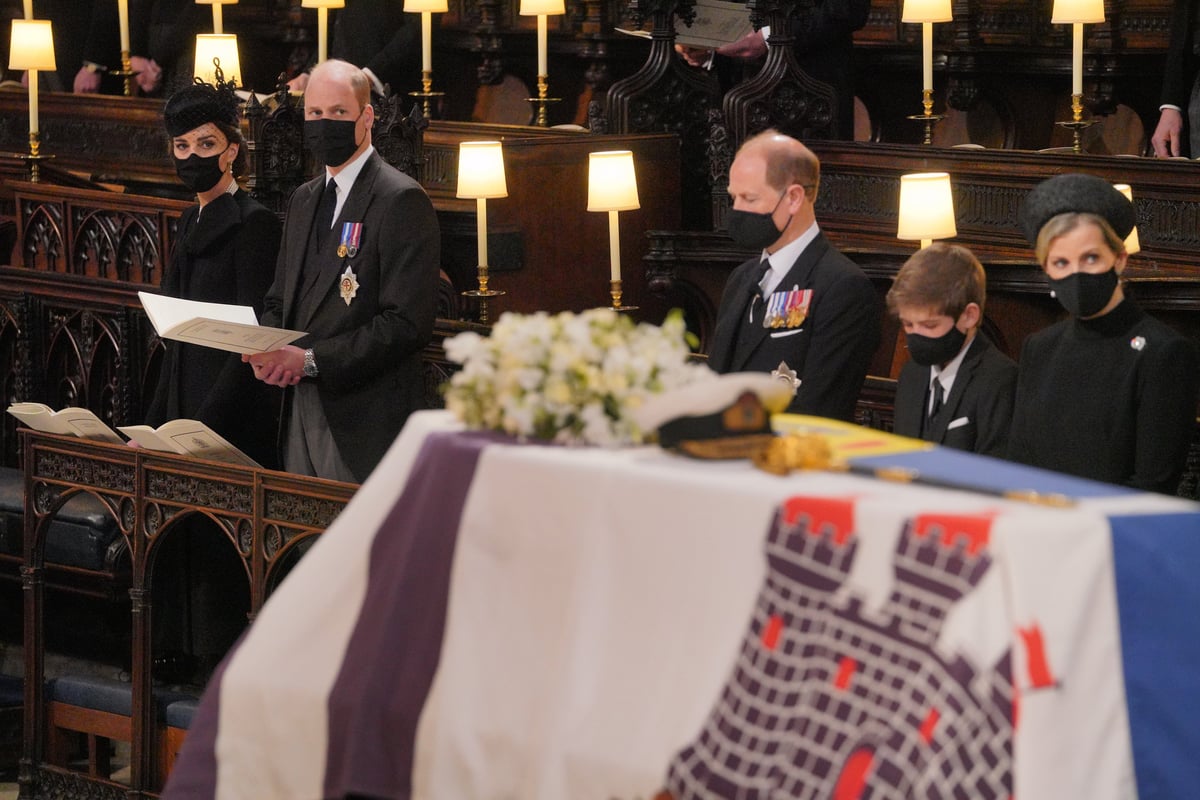 The intimate service included music chosen by Prince Philip himself before his passing. The only hymn of the ceremony, performed by a four-person choir, was the 1860 hymn 'Eternal Father, Strong to Save', by William Whiting.

The congregation did not sing, in line with coronavirus restrictions.

Prince Philip's coffin will remain in the Royal Vault until the Queen's death. 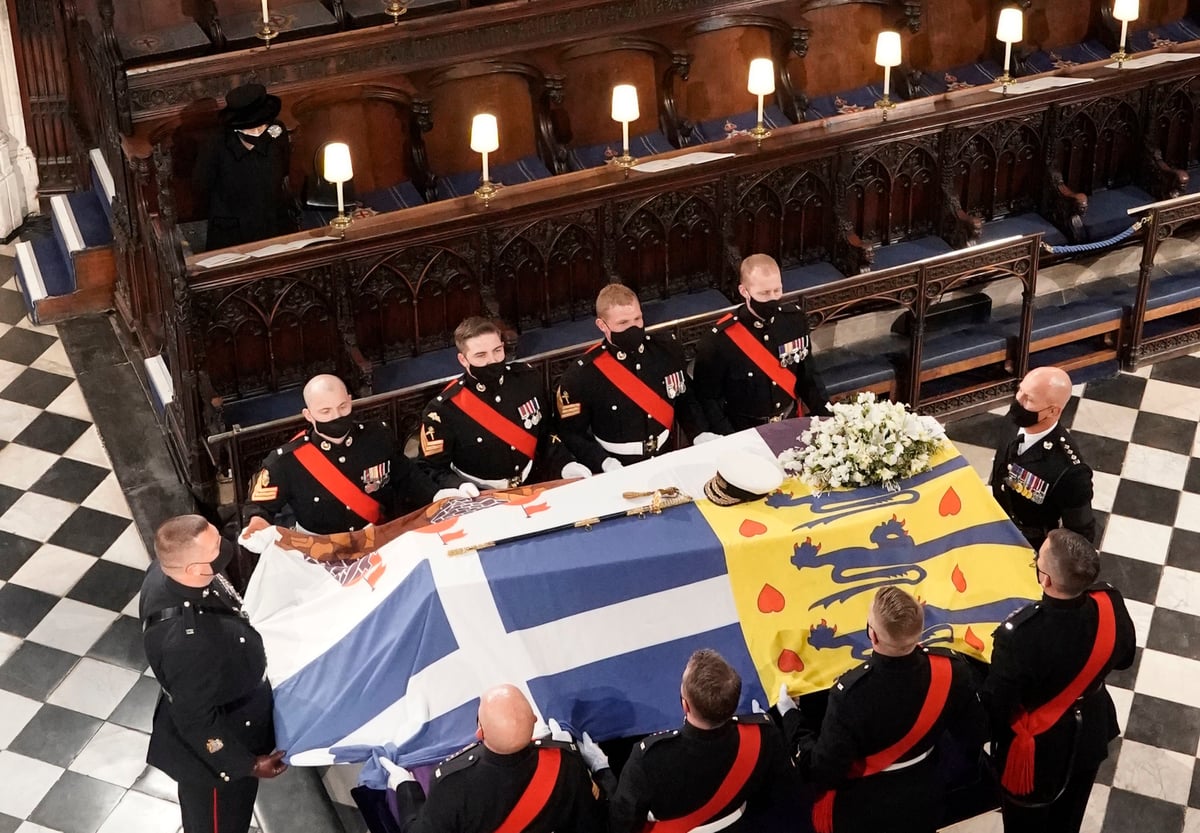 Queen Elizabeth II (left) watches as pall bearers place the coffin of the Duke of Edinburgh during his funeral in St George's Chapel at Windsor Castle on April 17, 2021 in Windsor, England. Image: Getty.

Philip's coffin was lowered into the Royal Vault, where he will rest at least until the Queen's death, alongside the remains of 24 other royals, including King George III, whose reign included the years of the American Revolution.

The Queen and Philip are expected to be buried together in the Royal Burial Ground on the Frogmore Estate close to Windsor Castle.

A topless protester ran past Windsor crowd after a minute's silence. 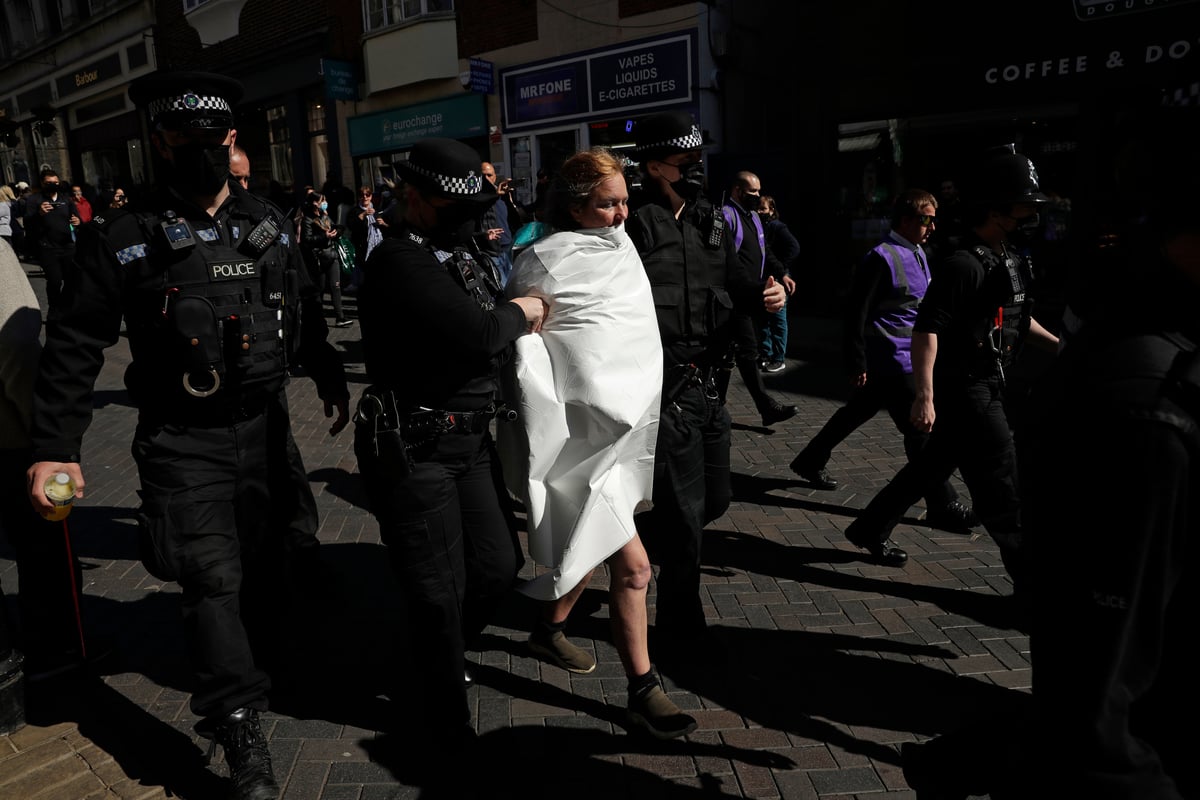 A topless protester who shouted "save the planet", was taken away by police officers after they put a cover over her body outside Windsor Castle during the funeral of Britain's Prince Philip in Windsor, England, Saturday, April 17, 2021. Image: AAP.

A topless protester ran past the crowd at Windsor Castle and shouted "save the planet" after a minute's silence was held for Prince Philip.

According to AAP, the woman appeared to try and break through security barriers.

Others at the scene said she jumped onto a nearby statue of Queen Victoria.

The protester was placed in handcuffs by police and was removed from the site.

While the duo have faced difficulties in their relationship over the last few months, they appeared to be friendly to each other at the service.

Too much is being made of this - the funeral was not about Harry and his relationship with his family. To focus and try to invent a narrative around him is just contributing to the problem. William and Harry sat well apart in the church, and as was appropriate, didn't engage in chit-chat or even exchange glances while they walked behind the cortege, so I am not sure where the author got the idea "they appeared friendly to each other at the service".
G
guest2 a year ago