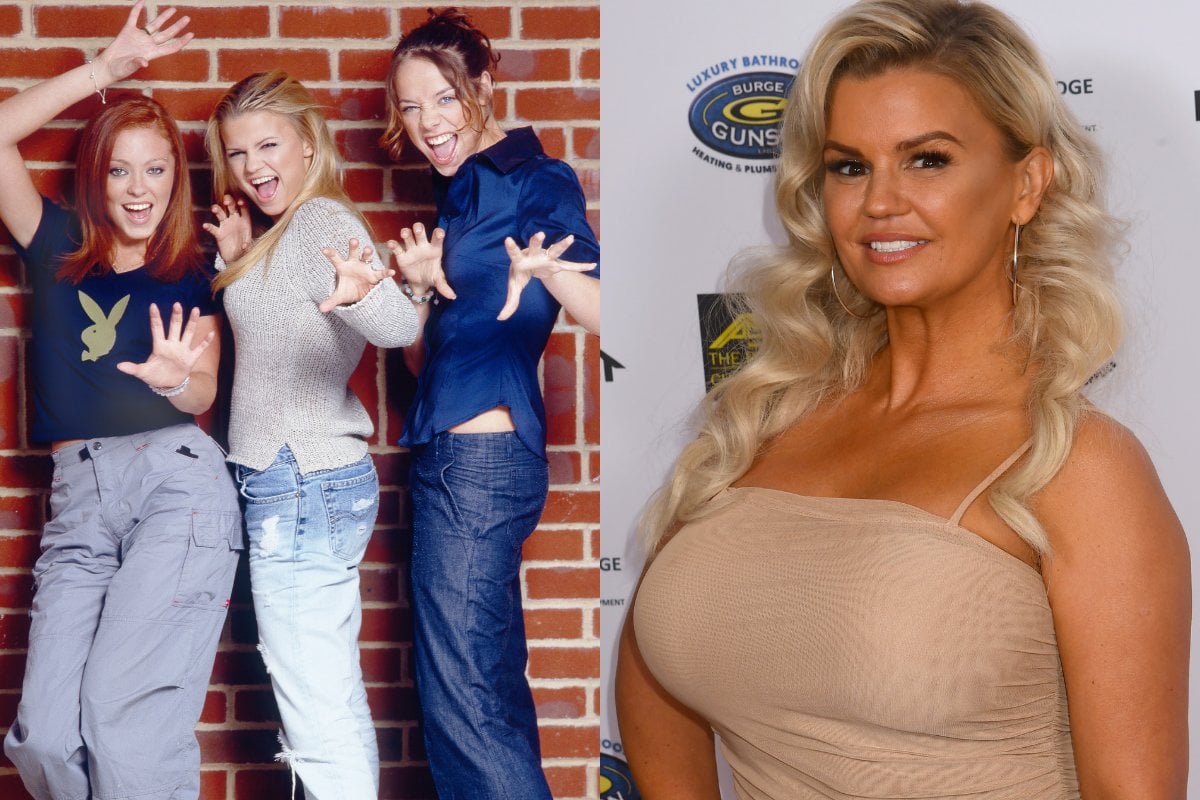 This post discusses addiction and suicidal ideation, and may be triggering for some readers.

Kerry Katona went from pop stardom in Atomic Kitten to bankruptcy. Now, at 41, the mum-of-five is a millionaire again, thanks to sharing topless photos of herself on OnlyFans.

Watch How are women having sex? The juiciest results from the Mamamia Sex Survey. Post continues after video.

Katona had a tough upbringing. She and her mother fled their home for a refuge when she was nine. Money was short, and she says she used to shoplift “all the time”.

“I remember going to Warrington market with my mum and stealing, just because we used to be starving,” she told the Mirror.

Her mother Sue had bipolar disorder, and offered Katona speed when she was just 14, telling her it was sherbet. Throughout her teens, Katona had stints living with foster parents. At 17, when she was back with her mother and getting a bit of work as a dancer in a nightclub, money was still short.

Before long, Katona discovered how lucrative lap dancing could be. Still only 17, she was making up to £500 ($925) a night, due to what she describes as her “great set of t**s”.

Katona’s dream was to become a Page 3 girl, but then she was introduced to Andy McCluskey from new wave band Orchestral Manoeuvres In The Dark, who was forming a girl group. He knew Katona was going to be a star, even though he didn’t think she could sing, so he found two girls who could – Liz McClarnon and Natasha Hamilton – and Atomic Kitten was born.

In 2001, the band scored an international number one smash with “Whole Again”. But Katona had just quit. She was pregnant to Westlife’s Brian McFadden. The two married and had daughters Molly and Lilly-Sue before splitting.

Katona soon found herself as a new career as a reality TV star. She won I’m A Celebrity… Get Me Out Of Here! and scored a string of her own shows, including My Fair Kerry and Kerry Katona: What’s The Problem? about her bipolar disorder. She got married a second time, to taxi driver Mark Croft, who she claims she met when he was allegedly supplying cocaine to her mother. They had two children, Heidi and Maxwell. But she was struggling with drug addiction. In 2008 she was declared bankrupt over a tax bill of £82,000 ($152,000).

"It wasn’t the fact I lost my money, I trusted the wrong people, so I had an accountant who turned out to be a con artist, and he did it to lots of people, but I was the only celebrity.”

Katona told Steph’s Packed Lunch she was “never taught about money”, and bankruptcy left her feeling “stupid” and “ashamed”.

“I understand why when people get in debt so many actually take their own lives over money. I’ve been there. I was so close to doing it myself.”

In 2013, she was declared bankrupt again.

“People are gonna be saying, 'She's fucked up again,’” she tearfully told The Guardian, just before the bankruptcy announcement was made. “But I've not fucked up. I've done everything I can possibly do.”

“For me to have a holiday with the kids, that's why I have to have a pap picture,” she explained.

After her second bankruptcy, Katona tried to keep the money coming in by doing more reality TV, including In Therapy and Celebs Go Dating, as well as more singing. She had a daughter, Dylan-Jorge, with her third husband Kay, but then split, saying the marriage was abusive. Kay died of a drug overdose in 2019.

Money was getting tight for the mum-of-five, especially when work dried up during the pandemic. When she reached the point where she was borrowing cash from her mum, she decided to join adult subscription site OnlyFans. There she started sharing photos of herself, including topless shots, with her subscribers, as well as photos of her feet, to satisfy foot fetishists. Before long she was making tens of thousands of pounds a month.

“People are quick to say, ‘She’s desperate,’ if I get out a bit of nipple, but I’ve made my first million since bankruptcy and I’m so, so proud,” she told the Mirror in July this year.

Listen to Cancelled, hosted by Clare and Jessie Stephens. Post continues after podcast.

Katona has used some of the money she’s made from OnlyFans to open an online clothing store and to start a dating app with her fiancé, Ryan Mahoney.

She says she’s a completely different person from who she used to be.

“I won’t let my finances or emotions be controlled by anyone else, as I once was.

“I just knew I had to grow up and get a grip of my life. Going bankrupt actually also helped turn things around because the leeches that were sucking me dry for my money suddenly all disappeared.”