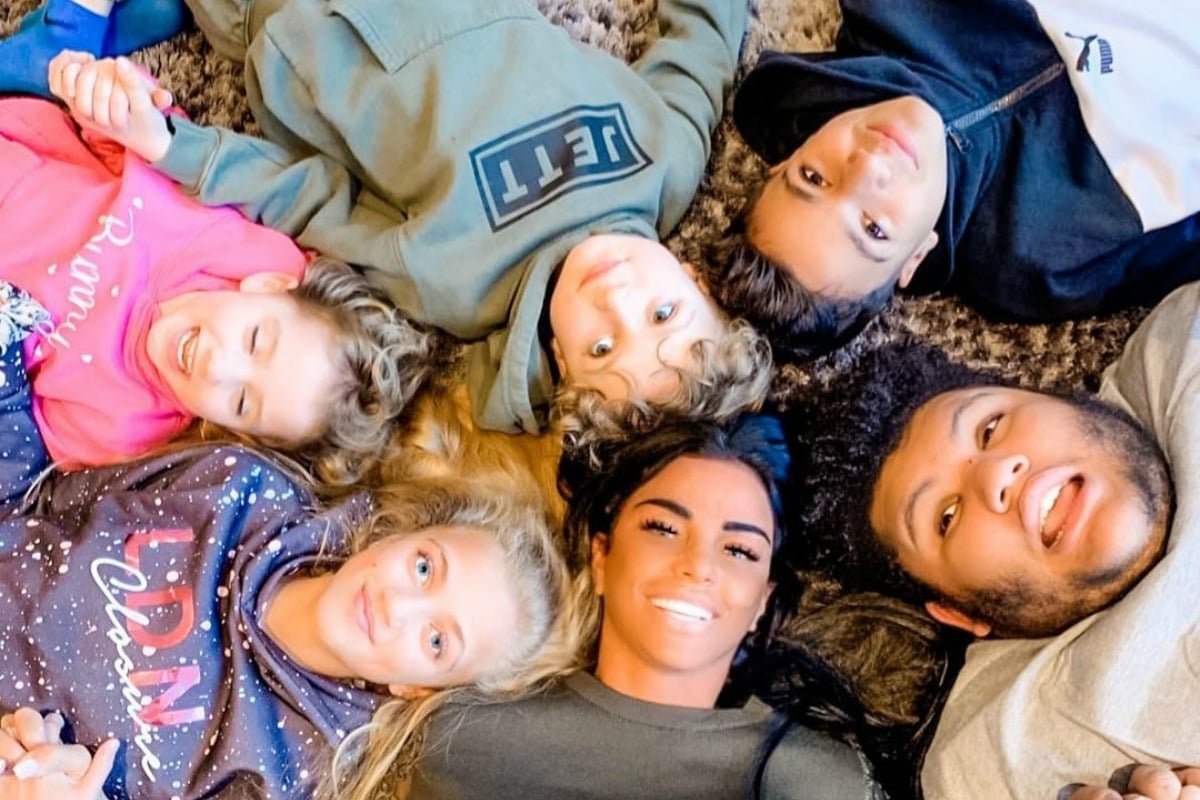 In yet another cruel knock on effect caused by the global coronavirus pandemic, she's been banned from the 18-year-old's side in intensive care.

Price, 42, has been told the next 48-hours are "critical" as doctors administer around the clock care to Harvey who is struggling to breathe.

I can confirm Harvey is in intensive care and in the best hands. I would like to thank the ambulance services and the hospital staff for the quick response and making him stable. X

Harvey Price was rushed into hospital over the weekend with a 42 degree temperature and chest pains.

He has Prader-Willi Syndrome among a number of other health conditions, and as The Sun reports, "one of his conditions is adrenal failure that could cause his organs to fail and is very dangerous."

Price is back home now waiting by the phone for news on his condition which is said to be stable at the moment.

This isn't the first time she's had an experience like this with Harvey, and according to OK Magazine she's gone into a familiar state of mind: "robot mode."

Harvey was born to Price and Manchester United footballer Dwight Yorke in 2002, but the relationship was short-lived.

At 14 weeks pregnant, Price found out he'd been cheating on her after photo evidence emerged of him with another woman.

Yorke initially denied he was Harvey’s father and demanded a paternity test, but a positive confirmation did nothing to strengthen Yorke’s bond with his son. 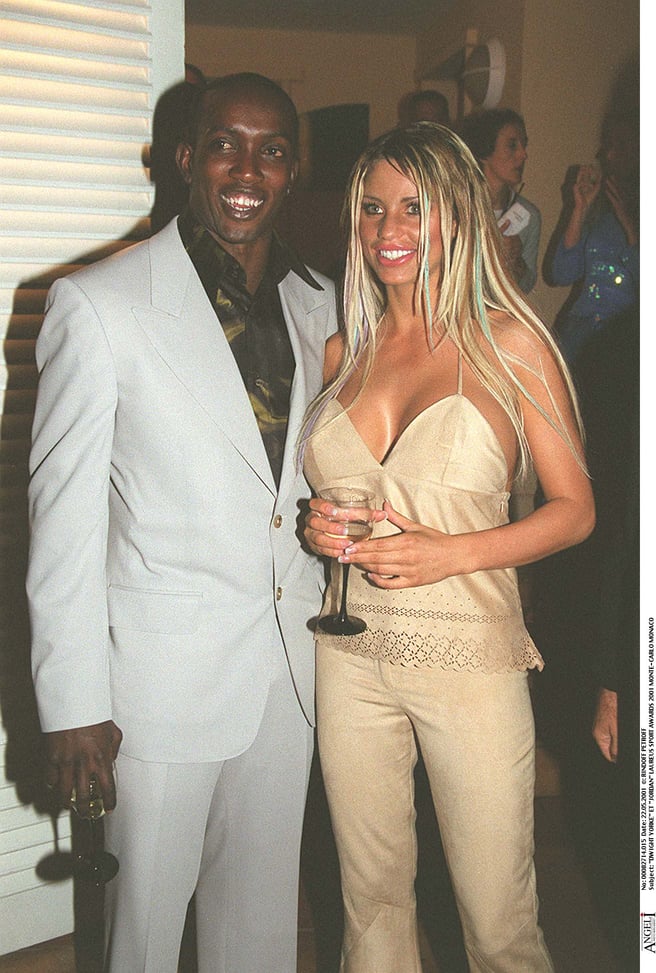 In 2009, Yorke spoke of his estranged relationship with Harvey in an interview with Sky News. He said he wanted to "play an intricate part" in Harvey's life and upbringing, but blamed his football schedule, 'lack of access' and distance for his minimal contact over the years.﻿

Happy Birthday to my Harvey Price. What a journey the last 18 years have been. ⁣ ⁣ You’ve defied all the odds and proven that you will not let your disabilities stop you. ⁣ ⁣ They said you’d never be able to read, but you love reading to your younger brothers and sisters.⁣ ⁣ Your talent has no boundaries with your artwork on public display at Gatwick airport, designed your own greeting cards for Anna Kennedy Online and raising funds for the NHS by designing your own T-shirt.⁣ ⁣ You light up a room with your unique humour and you have everybody in stitches.⁣ ⁣ You keep me entertained with your diverse taste in music and keyboard skills, from Beethoven to Queen.⁣ ⁣ Harvey Price, you make me so proud every single day.⁣ ⁣ Mum x

﻿However, Price claimed Yorke struggled to accept Harvey's disabilities, writing in her autobiography Reborn that he "refused to understand it."

Harvey was diagnosed at birth with the rare genetic disorder Prader-Willi Syndrome. He is also blind from his Septo-optic dysplasia, autistic, and has an underactive thyroid and diabetes.

In 2017, Price publicly called Yorke out on Twitter for not visiting their son in 10 years, remarking "the doors always open."

In 2004, Price appeared on I'm a Celebrity...Get Me Out of Here! in the UK and met singer/songwriter Peter Andre.

﻿﻿They married a year later and had two kids - Junior Savva Andreas and Princess Tiaamii Crystal Esther - before breaking up in 2009. Price also had a miscarriage a month before they announced their separation.

When Price was pictured on the front page of a newspaper with her riding instructor Andrew Gould, her alleged unfaithfulness led to their breakup even though she's always denied the affair, ﻿﻿ she told Radio Four in 2012. 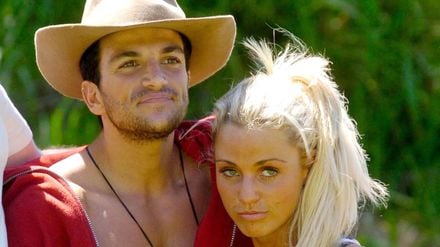 Andre and Price met while appearing no I'm A Celebrity together. Image: YouTube.

Since their split, Andre and Price have butted heads over their parenting styles on numerous occasions.

In 2011, Andre accused Price of being a "bad parent" for keeping their three-year-old daughter's injuries a secret from him, after Princess burned herself in a sauna while on holiday.

"Princess has got a minor burn under her armpit that she received in a fluke accident. While it is of course upsetting it happened at all, it was an accident of the type that happens to children all the time. Princess is fine, there will be no lasting damage and she is in no discomfort," Price responded.

In 2018 Andre was reportedly "furious" that Junior was allowed to launch his own clothing range without his knowledge.

It was soon confirmed by The Sun in 2018 that Andre had custody over their two kids after he banned Price from seeing them due to her "wild behaviour."

In her first ever YouTube video in 2020, Princess said of her mum's parenting style: "Sorry to stitch my mum up here - but if it wasn’t for my dad, we probably wouldn’t have any manners."

The now 13-year-old has 83,000 followers on Instagram, and Price said she's been "wanting her own YouTube channel for so long and I've finally caved."

So my beautiful @officialprincess_andre has been wanting her own YouTube channel for so long and I’ve finally caved. I think she’s definitely going to be more popular than her mum lol 💗 (Link on my latest story)

While Andre and Price's divorce proceedings were still being finalised in 2009, she met and married MMA fighter and actor Alex Reid, but their nuptials only lasted 11 months.

In January 2013, Price walked down the aisle for a third time to bodybuilder Kieran Hayler, after a Christmas Day proposal the month before. 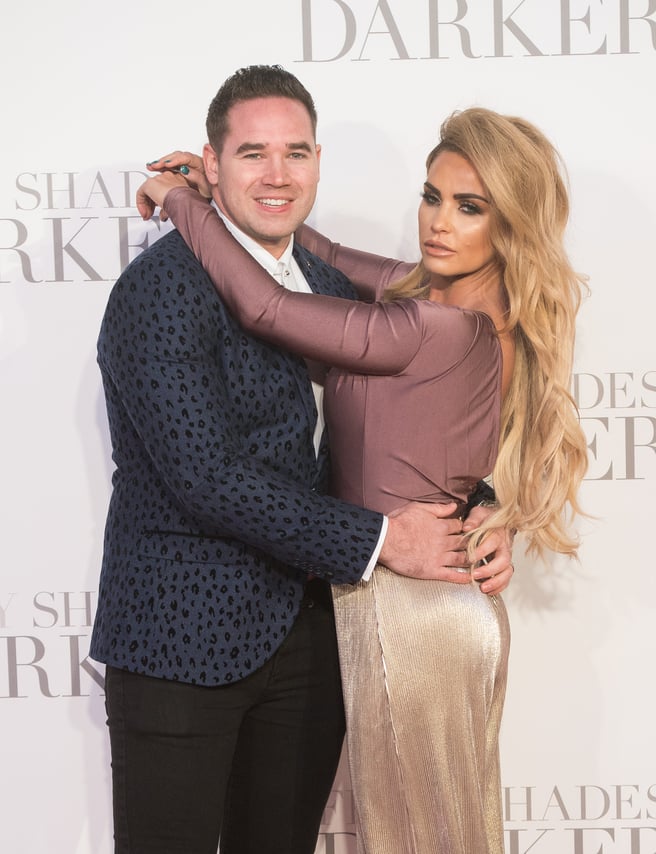 Seven months after their wedding, Price gave birth to her fourth child, Jett Hayler, and a year later in 2014 the couple welcomed daughter Bunny.

Just four months before Price gave birth to Bunny, she announced on Twitter her plans to divorce Hayler after finding out he had been having an affair with her best friend Jade Poutney.

As The Sun reports, Price caught them in the middle of a sex act and punched her friend in the face so hard her tooth came out.

It was then revealed he'd been having sex with another of her close friends, Chrissy Thomas.

Despite the infidelity, Price and Hayler renewed their vows in 2015, and again in 2017 after rumours of her own affair with Geordie Shore's Scott T emerged.

"The family we have built together has made me more mature. You know you can trust me more than ever. I love you with all my heart," he told her in his third set of vows.

In 2018, it was revealed exclusively by The Sun’s Bizarre column that Price had dumped Hayler for good after finding out he'd been having another affair with their children's nanny.

After their split, Price was declared bankrupt and checked herself into a rehab centre. She also spent 2019 in and out of court facing a number of motoring charges.

"The thing that upset me most was the fact Jett and Bunny were in the car when she was driving on a ban," Hayler told New! Magazine at the time.

Like Andre, Hayler has also publicly spoken about co-parenting with Price a number of times, telling New! Magazine in 2020: "With Katie's lifestyle I end up having them so much more. Sometimes she has to work so it'll mean I have to have them on a day that's not scheduled. That's fine - I'd drop anything for my kids - but she has to make sure she gives me some notice."

He also described the "well-oiled business arrangement" they'd forged, to allow them to discuss their kids "on a level."

A massive thank you to all our carers and key workers, in this crazy time. Thank you nhs and remember stay home, save lives. #clapforourcarers #nhs #stayhome #savelives

In 2020, the mother of five has been isolating with her son Harvey during the coronavirus pandemic, while her other four children have been predominately with their fathers.

"I regularly FaceTime the kids. I can’t wait to see them and to give them a big hug – this has been really hard. Kieran and Peter are great dads – I know the children are in safe hands," she told The Sun in April.

In May, she admitted she recently took drug tests to prove to both Andre and Hayler that she was fit to parent her children.

"I'm absolutely fine with them. I've passed all my drug tests. I had to do that to prove it to myself and everyone else around me. It's a new me," she told New! Magazine.

After six weeks apart, Price now has the kids on weekends and has been sharing photos online of the family out walking the dogs, having cuddles, playing with makeup, and celebrating Junior's 15th birthday.

💗Happy Sunday💗 Here’s a sneak peek of us all celebrating Junior’s 15th Birthday! Head over to my YouTube channel at 5PM today to see the full video 🎂🎉 (link in bio)

In some recent uploads to his Instagram stories, Junior said his mum has been trying to help him find a girlfriend and has "amazing instincts."

As of July 2020, the media personality is once again coupled up with car salesman and ex-Love Island contestant Carl Woods, after a one month engagement last year to personal trainer Kris Boyson.

"Found my perfect prince finally @carljwoods," she wrote in her most recent picture of the pair.

Price's children now range in age from 18 to five, and in a recent interview with The Sun she admitted if it weren't for them, especially son Harvey, she probably wouldn't be here.

"I just think no one would look after him the way I do, and he wouldn’t understand why I’m not there. The thought kills me," she told the publication.

With everything going on in this crazy world right now, I just wanted to come on today to wish everybody a Happy Mother’s Day. These are very strange times and I am so thankful to be spending the day with all 5 of my wonderful children. I know many people (including myself) weren’t able to see their mums today and my thoughts are with you all. Please stay safe everyone, follow the government’s advice, #stayhome and lets #Bekind to each other. Katie x

A post shared by  Katie Price (@katieprice) on Mar 22, 2020 at 1:06pm PDT"I just think no one would look after him the way I do, and he wouldn’t understand why I’m not there. The thought kills me," she told the publication.