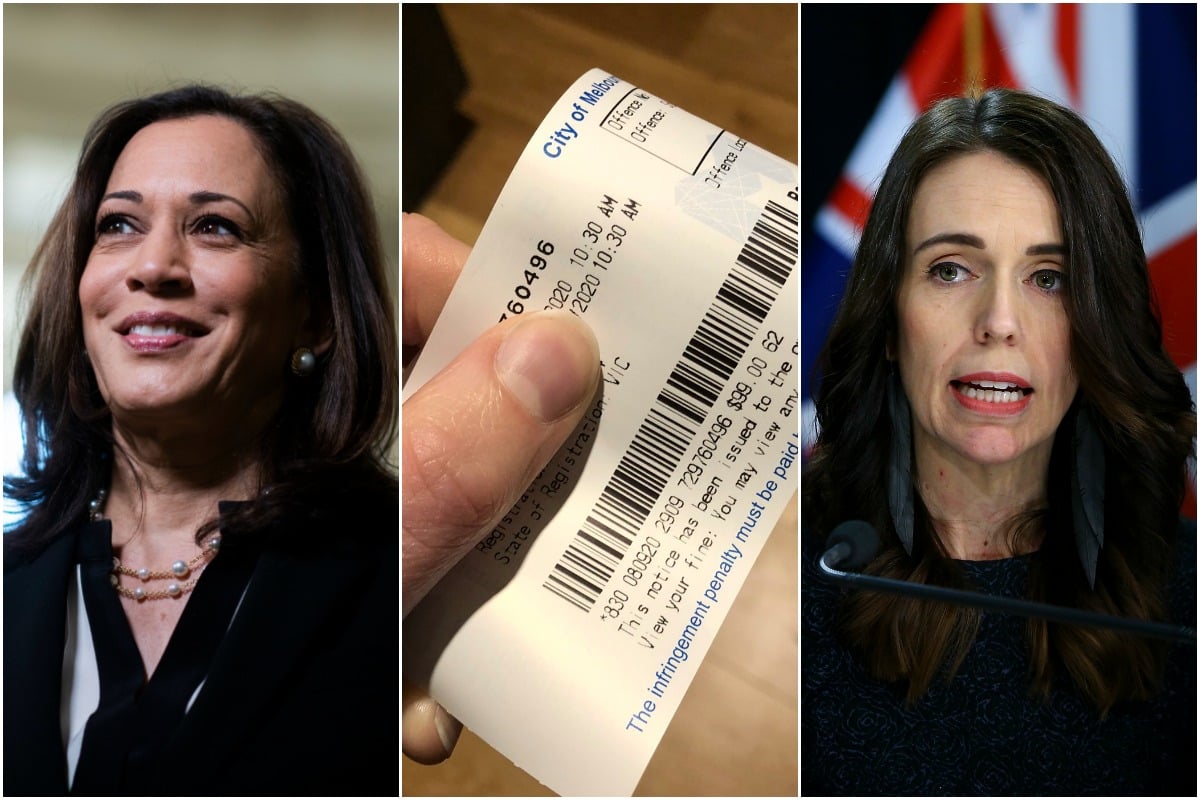 Victoria has again reported its deadliest day yet in the coronavirus pandemic, with 21 new deaths in the 24-hour period to 8pm Tuesday. Of these deaths, 16 are linked to aged care.

This brings the state's death toll to 267 and the national figure to 352.

Victorian Premier Daniel Andrews also announced there were 410 new cases reported on Wednesday, which is the highest number since Saturday.

There are currently 7877 active cases of COVID-19 and 662 people in hospital, including 43 in intensive care and 25 on ventilators.

Kamala Harris becomes the first Black woman on a US presidential ticket.

Democratic presidential candidate Joe Biden has tapped Senator Kamala Harris of California as his choice for vice president, his campaign has told supporters in a text message.

Harris, 55, becomes the first Black woman and first Asian American person on a major presidential ticket in US history.

I have the great honor to announce that I’ve picked @KamalaHarris — a fearless fighter for the little guy, and one of the country’s finest public servants — as my running mate.

"You make a lot of important decisions as president. But the first one is who you select to be your Vice President. I've decided that Kamala Harris is the best person to help me take this fight to Donald Trump and Mike Pence and then to lead this nation starting in January 2021," Biden wrote in an email from his campaign to supporters.

Harris, the only Black woman in the US Senate, was elected in 2016 after serving as California’s attorney general and, before that, San Francisco district attorney. 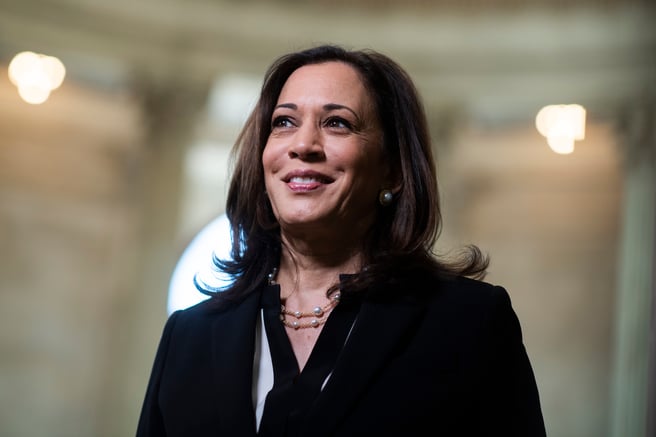 Kamala Harris has been elected as Joe Biden's running mate at the upcoming US election. Image: Tom Williams/CQ-Roll Call/ Getty.

She's a native of Oakland, California, and the child of Jamaican and Indian immigrants, Harris has said she was inspired to attend law school after joining civil rights protests with her parents.

The coronavirus-hit state's seven-day case average is beginning to trend downwards as stage three restrictions and the introduction of masks have an impact.

But contact tracers have been unable to push down the number of cases with an unknown source. The overall figure rose to 2903 on Tuesday, up 40 from the day before.

Aged care deaths also show no signs of abating, with Health Minister Jenny Mikakos admitting it might be weeks before COVID-19 starts to loosen its deadly grip on the sector.

"There will be a time lag in terms of the number of fatalities and that will take longer," she told Victoria's Public Accounts and Estimates Committee on Tuesday.

Of Victoria's 331 new cases on Tuesday, 91 are linked to outbreaks or complex cases and 240 are under investigation.

There are 7880 cases active across the state, with 650 people in hospital and 43 of those in intensive care.

The effect of Melbourne's stage four lockdown isn't expected to start showing up until next week.

Premier Daniel Andrews has been grilled over his government's handling of the coronavirus pandemic at the Public Accounts and Estimates Committee's COVID-19 Inquiry on Tuesday.

The failed hotel quarantine scheme is believed to be responsible for the state's second wave of COVID-19 which has taken Victoria's death toll to 246 and led to the nation's toughest lockdown.

Premier Daniel Andrews said the Australian Defence Force hadn't been offered to guard the hotels at the time the program was introduced, despite reports to the contrary.

Victorian Opposition Leader Michael O'Brien accused the premier of lying to parliament and Victorians, labelling his comments a "dishonest attempt to cover up" the scandal.

A leaked video published by the Herald Sun shows Department of Jobs, Precincts and Regions bureaucrats congratulating themselves for setting up the hotel quarantine program in less than 24 hours.

That department's minister Martin Pakula, Treasurer Tim Pallas and controversial economist Gigi Foster are among those due to appear via video link before the COVID-19 inquiry on Wednesday.

Asked if he would demand Mr Pakula's resignation over the bungled program on Tuesday, Mr Andrews replied "no".

Auckland heading back into lockdown.

New Zealand Prime Minister Jacinda Ardern has appealed for calm from Aucklanders heading back into lockdown after the first new community COVID-19 cases in 102 days were identified.

BREAKING: Coronavirus has broken out again in New Zealand after 102 days.

Prime Minister Jacinda Ardern has announced that new restrictions are going to be temporarily imposed in Auckland so health officials can "assess the situation".

As of noon on Wednesday, Aucklanders will be required to stay home unless they are conducting essential work or essential personal movement - such as supermarket shopping, health care or exercise.

"One of the most important lessons we've learned from overseas is the need to go hard and go early and stamp out flare-ups to avoid the risk of wider outbreak," Ms Ardern said in a late-night press conference on Tuesday.

"As disruptive it is, a strong and rapid health response remains the best long-term economic response.

"In line with our precautionary approach, we will be asking Aucklanders to take swift action with us."

The lockdown has been announced for 60 hours - from noon on Wednesday to midnight on Friday - to allow health officials to contact trace, isolate potential cases and conduct mass testing.

However, the short-term level three lockdown still prompted Kiwis to head out to shops; within the hour Radio NZ reported hundreds of people queuing outside supermarkets.

There are already long lines at Auckland supermarkets.

The below images are from inside the Grey Lynn countdown, lines outside Mt Eden Countdown, and about 200 people wrap around the Countdown building on Quay Street.

The rest of New Zealand has moved up to level two, which allows businesses and schools to open as long as physical distancing measures are followed.

Melbourne healthcare workers will have access to thousands of extra parking permits after one doctor copped a fine while working to keep some of Victoria's sickest COVID-19 patients alive.

"In lockdown, who do you think is parking in the streets by the hospital? It is the doctors, nurses, orderlies, pharmacists, physios, technicians, cleaners, cooks, ward clerks," she tweeted on Tuesday.

Dear @cityofmelbourne @SallyCapp_
I am a doctor at the Royal #Melbourne ICU.

I worked 56 hours over four days in helping look after some of our state’s sickest patients.

At 10pm last night, I left work to find a fine on my car dashboard. pic.twitter.com/sA1oKE21lB

"We cannot work from home. We come here, and we sweat it out under our gowns, our voices muffled under masks, learning to 'smile with our eyes'.

"We wash our hands obsessively, hoping desperately we do not become part of That Statistic. We do not see our families for weeks."

Within hours, the City of Melbourne apologised and withdrew the fine.

Lord Mayor Sally Capp also announced up to 5000 extra temporary parking permits would be available for frontline workers. About 8000 had already been provided to doctors and nurses, the council said.

Sorry we missed the mark on this tweet to @KArandjelovic. Given your critical role, we have withdrawn the fine. Royal Melbourne Hospital is being provided with additional frontline worker permits. Please grab one! We have given out 8000 so far to nurses and doctors. 1/2

Premier Daniel Andrews told reporters: "Someone who's in there literally saving lives at considerable risk to themselves should not be the subject of a parking ticket."

During the pandemic, councils are still allowed to enforce parking restrictions when they relate to access and safety, such as vehicles in disabled parks without a permit or in no standing zones.

President Vladimir Putin says Russia has become the first country in the world to grant regulatory approval to a COVID-19 vaccine after less than two months of human testing, a move hailed by Moscow as evidence of its scientific prowess.

The vaccine still has to complete final trials, raising concerns among some experts at the speed of its approval, but the Russian business conglomerate Sistema has said it expects to put it into mass production by the end of the year.

Russian health workers treating COVID-19 patients will be offered the chance of volunteering to be vaccinated in the coming weeks.

Regulatory approval paves the way for the mass inoculation of the Russian population and authorities hope it will allow the economy, which has been battered by fallout from the virus, to return to full capacity.

The vaccine will be marketed under the name 'Sputnik V' on foreign markets, he said. State media have trumpeted the news.

But the speed at which Russia has moved, approving a vaccine before the final stages of clinical trials to test safety and efficacy are over, has worried some scientists, who fear Moscow may be putting national prestige before safety.

- Angry Lebanese say the government's resignation doesn't come close to addressing the tragedy of last week's Beirut explosion and are demanding the removal of what they see as a corrupt ruling class.

- Google's Android phones have started detecting earthquakes to provide data that could eventually give billions of users precious seconds of warning of a tremor. The alerting feature will first be rolled out in California.

- Bindi Irwin and Chandler Powell have announced they are expecting their first child.

Reply
Upvote
Let’s be honest here. If Joe Biden is elected president, we’ll have a situation where Kamala Harris is the one actually running the country. If you’re in any doubt about this, google Biden’s interview on The Voice answering questions about inappropriate behaviour. He constantly wandered off track and didn’t complete one sentence.
G
guest2 2 years ago

Reply
Upvote
@birdie i think that was the point of nominating a VP who (apart from having a pulse) represented the new look  of the Democratic Party and would be the next nominee for President in 2024.  I doubt Joe Biden had much say with picking his VP, just as McCain was forced to accept Sarah Palin.
M
mamamia-user-482898552 2 years ago

Reply
Upvote
2 upvotes
@birdie Six of one, half a dozen of the other. Take a look at the Republican option.
C
cat 2 years ago