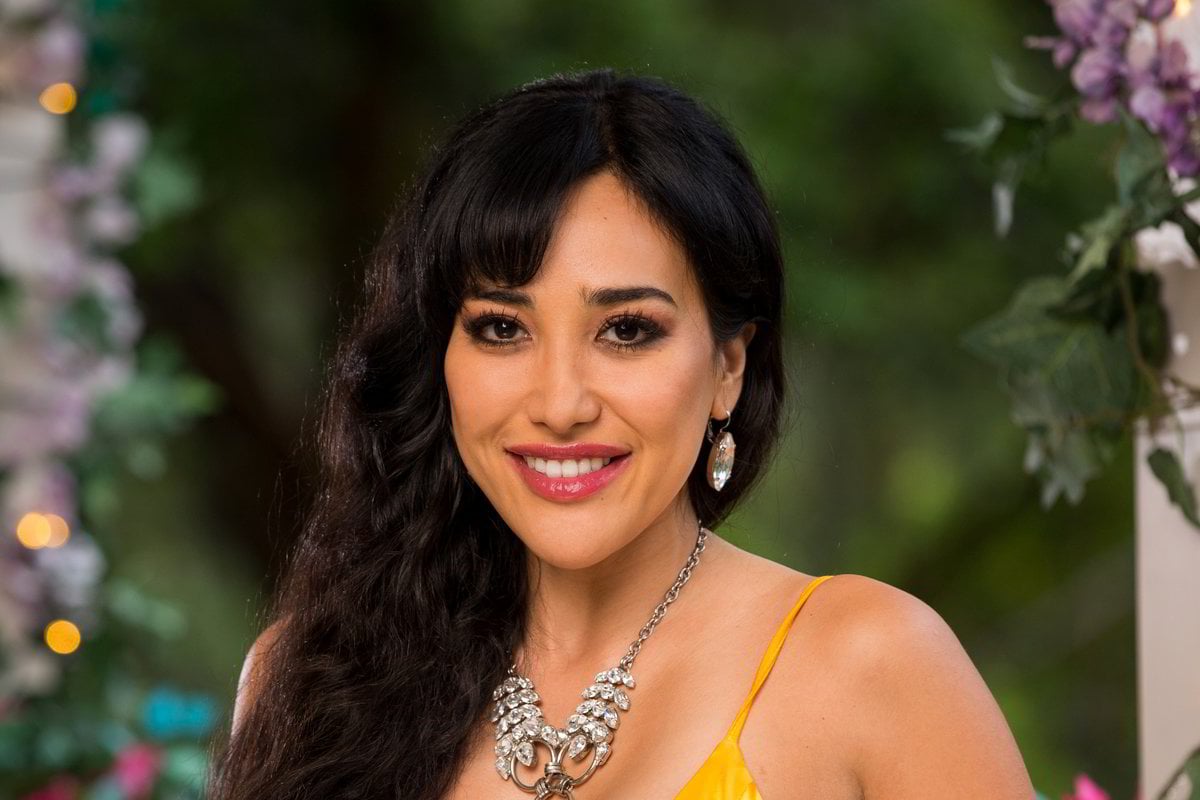 On Wednesday night's episode of The Bachelor, Juliette Herrera left Locky and the mansion behind to get back to her DMs.

She had rappers from LA and famous TikTokers wanting to speak to her, so she couldn't waste another second listening to Locky talking about hiking and sleeping in tents.

"I had a revelation," she told Mamamia on Thursday morning.

"I had to convince myself of my own fabulousity (sic). And I thought what am I doing? I need a mansion, not a tent."

The 34-year-old stylist explained that Locky "saved her dignity" by not putting her through another rose ceremony because he is a "beautiful man".

"I was so relieved. I was like I'm going out, going to get a drink, message some boys... go to the DMs, see if they're still waiting for me.

"I had to ignore them, keep them in bold. I was like 'Locky, come on. There's some eligible men here'."

While Juliette didn't make a long-lasting connection with Locky during her time on the show, she did have a "special relationship" with someone else.

At nearly every cocktail party and during some group dates, Juliette clashed with her fellow contestant Roxi Kenny.

By the time it climaxed with Roxi walking out of the mansion last Thursday night, their ongoing feud had almost become its own character on the show.

"I think the clash was on her end," Juliette explained to Mamamia. "I never had a rivalry with her. She was not my competition. We were in different lanes."

Juliette said she didn't have much to do with Roxi until that cocktail party where Roxi claimed she was trying to throw her under the bus.

"You literally cannot throw someone under the bus or have a scheme, you don't have that power. It's all up to Locky."

Juliette said that what we saw on TV was a true reflection of what was going on inside the mansion. The house was divided into two camps - with Juliette, Areeba, Kristina and Kaitlyn in one camp, and the rest of the women in the other.

"It was a divided house. It was four girls versus the majority," she said.

While Juliette undoubtedly knew how to push Roxi's buttons, it was Roxi who would scream and name-call and cause a scene at every cocktail party.

However, it seemed like the women in the mansion rallied behind Roxi and defended her, while they roundly criticised Juliette's behaviour.

"So it's quite interesting when people try to flip it and say that I was the agitator when I thought I'm not being aggressive, I'm talking to her the same I talk to everyone.

"And why are my feelings and emotions and sensitivities not as valuable as Roxi's?"

Juliette believes she clashed with Roxi simply because she didn't pander to her and was willing to stand up to her and call her out.

"If you talk about someone and then you're smiling to their face, I can't be around that. Like how can you do that?" Juliette said, referring to the time Roxi spoke about intruder Bec on a Zoom call.

"That was just the one time I raised it. And then the other time I wanted to know why she wanted to leave the group chat and think that's fine to make a big scene while all of us had difficult questions."

The last time Juliette saw Roxi, Roxi grunted at her and then left the show for good.

"And then at the mansion, my mere presence deserved a grunt from her? And I called her up on it and it set her off," she explained.

After her exit, Roxi told Mamamia Juliette said something to her when she went into the mansion and that's why she decided to leave.

LISTEN: You know it's bad on The Bachelor when Osher weighs in. Post continues below.

"When we went into the bedroom to get away from it all, [Juliette] followed me in there and said a comment which was kind of the straw that broke the camel's back that pushed me to exit," the 29-year-old said last week.

"I think [that comment] is probably what viewers didn't see, which was the main reason for me leaving."

According to Juliette, that never happened.

"What Roxi said is according to her, and I made sure that all our interactions were in front of the camera for that reason," she explained.

"Because you can say anything happened behind the camera, but I made sure to only interact with her in front of the camera.

"So that's just people not taking accountability for their own behaviour."

For now, Juliette is happy to leave her time on the show and her feud with Roxi behind her, so she can concentrate on what's important to her.